In “Life on the Mississippi,” Mark Twain writes the following about the antiquity of the river: “The world and the books are so accustomed to use, and over-use, the word ‘new’ in connection with our country, that we early get and permanently retain the impression that there is nothing old about it.” That is, of course, ridiculous, as Twain goes on to explain – the features of the landscape have been part of the human experience for thousands of years, and even the more recent interactions with that landscape dwarf the decades-long scale in which we’re used to measuring the human history of the region.

Which is self-evident. To say the Mississippi River — or any part of the natural landscape — is old doesn’t necessarily convey any sense of that age. But let’s scale these vast stretches of time and history into more manageable chunks. We can do this by looking to a few specific examples of that natural history around town: specifically, trees. Some of the trees in the city are the oldest living links to the past.

There are dozens of trees listed in the Minneapolis Park Board’s registry of heritage trees, notable for size, age or cultural importance. Of all of these, there are at least two trees that are both older than anyone who has ever called themselves a Minneapolitan. The first is the remains of the Ancient Oak in Seward, which died in 2010 after approximately 333 years. The second is the Rockwood Oak in Theodore Wirth Park in North Minneapolis. It is at least 314 years old, meaning it first sprouted sometime around the turn of the 18th century. It nearly died a year after the Ancient Oak succumbed to age, in the North Minneapolis tornado, but it still lives.

Older than their namesakes

When viewed against the landscape of the rest of the city, they remind you in an immediate way that Minneapolis as a place predates just about any proper name around town you can think of. The Ancient Oak, for example, is located close to the Mississippi River, near Franklin Avenue in Seward. It handily predates both of those namesakes, Benjamin Franklin (born 1706) and William Seward (born 1801). As for the word “Mississippi,” consider that it had not yet entered the English language in its modern form when the Ancient Oak first appeared. The word had only barely entered the French language (about 1666), where it has been adapted from the older Ojibwe word Misi-ziibi. The only names as old as the tree are in Ojibwe or Dakota languages. 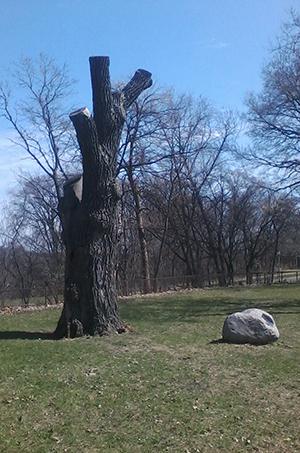 This oak tree, located near the Mississippi River Bluffs, sits in a parcel of land between Franklin Terrace and West River Parkway just north of Franklin Avenue. For the entire history of the city through 2010, it was the oldest tree – perhaps the oldest freestanding object of any kind – in Minneapolis. Arborists and scientists speculated about its age for decades, some conjecturing it could be as old as 700 years. When it died in 2010, based on the rings, arborists determined it was about 333 years old. The Parks Board considered removing the remains, but after an outcry from the neighborhood, what was left was allowed to stand in the park, with a plaque mounted to a rock that sits before it.

It now has the look of a monument, its limbs shorn off, but the trunk still standing steadfastly in the ground. Much of it has been hollowed out, and you can peer into the heart of the tree, catching the sunlight streaming in through the gaps and crevices in odd and spectacular ways. In fact, owing to these human-made alterations, it’s as much a sculptural object as it is a natural object, a sort of monument to itself. 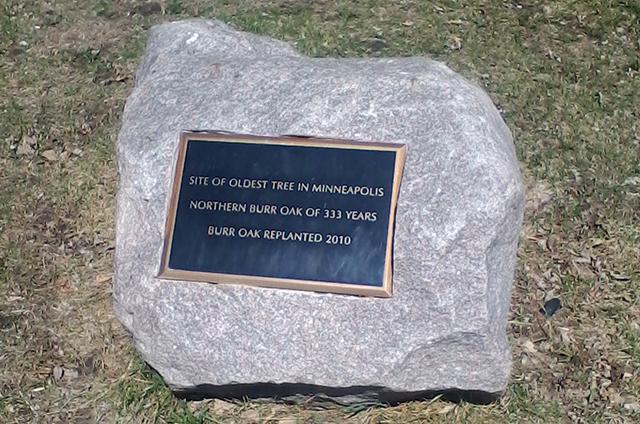 There are some other burr oaks planted nearby, during the same 2010 summer the Ancient Oak died. “Replanted” is actually the word the plaque uses, with the sense that these young oaks will hopefully be around in another 333 years.

The Rockwood Oak is located on a trail near Wirth Lake, just east of Theodore Wirth Parkway between the Olson Highway and Glenwood Avenue. I was worried I wouldn’t be able to find it, that it’d blend into the sylvan background, but I really shouldn’t have been. The Rockwood Oak looks, compared to its neighbors, almost impossibly ancient. In 2011, it was damaged in the tornado, as were a great number of the trees in the area, a small part of the vast swath of wreckage of that storm. The damage to the Rockwood Oak manages to make it look even more grizzled and primeval, stooped over, blackened with age, covered in bulbous forms on the trunk. It looks at once vulnerable and completely impervious to the passage of time. 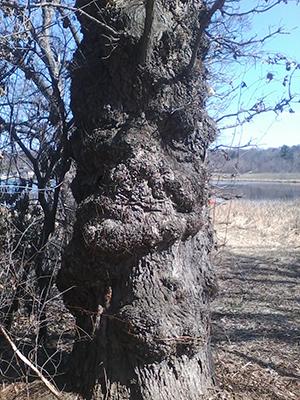 Theodore Wirth, the Swiss-born Minneapolis Park superintendent who masterminded the development of the local park system, named the tree in honor of C.J. Rockwell, a member of the Park Board who’d worked to preserving the tree in the early 20th century. From a strictly nomenclatural perspective, we got lucky: the surname “Rockwood” has an innately sturdy, ageless quality to it. As important as Rockwood’s work undoubtedly was, however, and as appropriate a name as he had, it feels a little myopic to saddle such an ancient tree with a name only one-third as old as it is.

When the sapling that would grow into the Rockwood Oak pushed its way through the ground by a lake around 1700, Rockwood’s great-great-great-great-great-grandfather was a teenager on a farm somewhere far, far away from the Upper Mississippi River. When the tree finally dies, Rockwood himself may well have been gone for well over a century. There are oak trees in the United States that are almost 1,500 years old. Who knows how many more centuries it may have in it.

The tallest and widest

The Rockwood Oak and the Ancient Oak are the only two trees specifically listed for cultural and historical reasons, but there are dozens of other trees of all kinds in the champion and significant size categories. Most interesting are the champion size trees – those attaining the tallest or widest of their species. That’s anything from a 105-foot Manchurian walnut tree in Keewaydin to an eastern cottonwood with a 284.5-inch circumference in Webber-Camden. 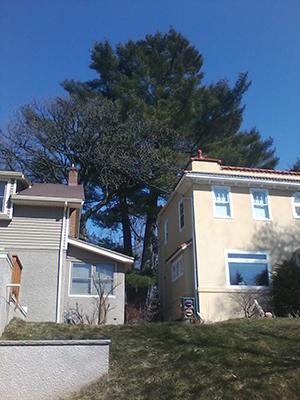 MinnPost photo by Andy Sturdevant
Near Lake Harriet and 50th Street, there’s an
eastern white pine that’s among the tallest in the city.

The list of champion size heritage trees spans the whole city. Tracking them down in order to get a good look at them presents another opportunity to push the boundaries of public and private space. Many of these trees are in parks, but most are on private residences. A fair number of those are in people’s backyards. Looking at these trees up-close yourself can involve anything from knocking on front doors to cutting through alleys to simply standing on sidewalks and looking at what you can see from there.

Near Lake Harriet and 50th Street, there’s an eastern white pine that’s among the tallest in the city. (For the record, I opted for the third choice of simply standing on the sidewalk and looking up.) It’s 115 feet high, which, in architectural terms, makes it taller than the Minneapolis Central Library. It shoots right out from behind a tidy Spanish-style house, splitting off into twin trunks at the bottom, dwarfing all the other fairly tall conifer trees in the neighborhood. In a low, flat and relatively new city, these giants create a vertical scale, as well as an expanded scale of time and a sense of monument. And most of them are sitting in people’s yards.

Thanks to Jim Proctor for the tips.

To get your arms around history, consider the ancient trees