It is appropriate, maybe, that the first headstone I come across in Memorial Pet Cemetery in Roseville on a ferociously rainy Sunday afternoon is one that reads, through a layer of mud: “With me through rain and snow and mailman.”

It’s been pouring for hours, but like a faithful pet or a terrorized mailman, I must make my own appointed rounds. Roseville’s Memorial Pet Cemetery is testament to the fact that people will pay any price, bear any burden or meet any hardship on behalf of their ever-faithful pets. It’d be crass to let some rain stop me from making my pilgrimage and paying my respects.

Memorial Pet Cemetery is the largest pet cemetery in the Twin Cities, and one of the oldest — it traces its history back to the 1920s, only a few decades after the first modern pet cemeteries were established in London and Paris. A Roseville veterinarian named Arnold Feist set aside some of his farmland to create the cemetery, and it was known as Feist Pet Cemetery until the Ramsey County Humane Society acquired the site in the early 1980s.

Like almost any cemetery in the core cities — certainly most of the cemeteries I’ve written about over the past two years — it once had a bucolic setting but since has been overtaken by 20th century suburbia. Highway 36, merely an unpaved gleam in a planner’s eye when the earliest inhabitants of the cemetery were reaching the ends of their 10- to 15-year lifespans in the 1920s, is now a roaring four-lane expressway that marks the southern border of the park. On this rainy afternoon, cars pass over the rain-soaked pavement with giant splashes. 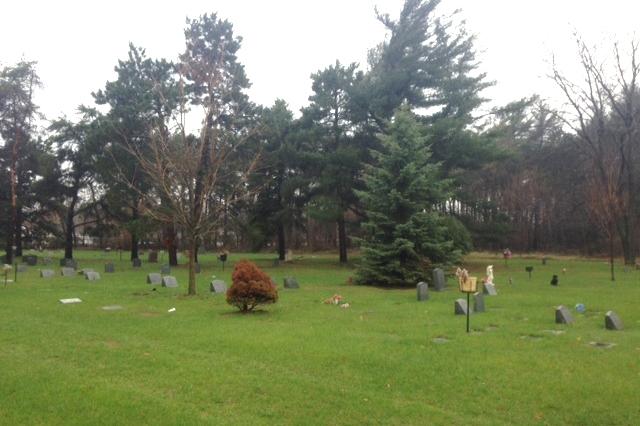 Despite the highway, the surrounding Roseville neighborhood is quiet and heavily residential, and the cemetery is very peaceful, and thoughtfully tended. Memorial Pet Cemetery, still owned by the Humane Society, holds occasional devotional and remembrance services, and many of the graves have been recently decorated. There are a handful of older headstones dating back to the 1920s and ’30s, but the vast majority of them are from the post-World War II era. The cemetery stopped accepting new interments in the early 2000s, so most of the headstones are from the middle and later years of the 20th century.

Most of these dogs and cats are contemporaries of Lassie and Yukon King and Rin Tin Tin, and in reading the dates – 1953, 1955, 1961, 1974 – you imagine scenes in dens and backyards with lots of postwar kids, set in prosperous, leafy Twin Cities suburbs. That sense of postwar prosperity is very powerful here. People have been interring their pets with them or separately since the dawn of history, but the idea of cemeteries for regular people’s animal companions that are roughly on equal footing to those for humans is relatively new, and one that only became widespread in the last half of the previous century.

To that end, Memorial Pet Cemetery doesn’t look much different from a human cemetery, in terms of the headstones, wreaths and funereal architecture. (There are some nice photos on Find a Grave.)

There are statues, both of domestic animals and of St. Francis, throughout. The headstones are made professionally, from handsome chunks of marble and granite. Many include what seem to be standard engravings of various breeds of animal available upon purchase. The same Chihuahua, eyes bulging and smiling broadly, turns up a number of times (at least four are named “Pepe”). There also are many instances of a devoted-looking retriever, a Yorkie’s head in profile, and a leonine cat. Most follow the standard headstone template: a name, sometimes the names of the owners, some dates (more on that in a moment), and a short epitaph.

Inspecting these epitaphs, you begin to see that people’s relationships with their pets are much different from those with their human relatives. The inscriptions on these headstones seem somehow more personal, more loving, more nakedly yearning and emotional than what you typically see on human headstones. There often are thoughtful and moving elegies on human headstones, but there often is restraint. 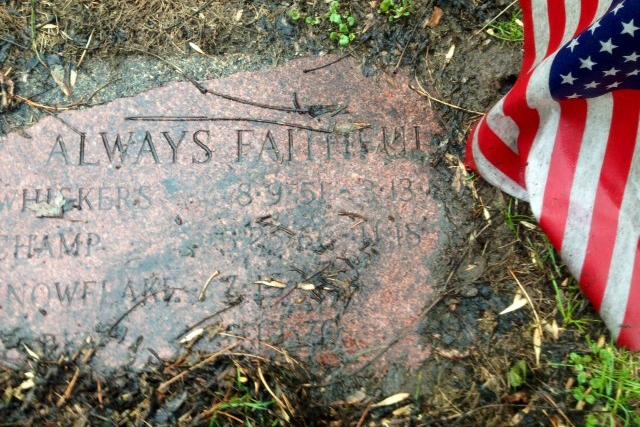 Walking through the rows of graves at Memorial Pet Cemetery, you come across outpourings of tender devotion that you never would see expressed so freely with humans: “Faithful.” “Darling.” “Precious.” “Thank you for making us happy.” For a guide dog named Smokey: “Thank you for devoting your life to my welfare and safety.” Something about the relationship with a pet frees people to discuss their love and affection in a more unmediated, expressive way.

For all this expressiveness and great love, there also is uncertainty.

There are a lot of “?”s listed as the year of birth, as well as some educated guesses where the specifics weren’t known (“Fall 1959” ventures one). You start to understand how these animals came into their owners’ lives. An impressive many have specific dates of birth, which makes you think either the animals were well-bred, with records and certifications available, or perhaps they were part of the litter of another pet, and the owners marked the specific calendar day. But many of these pets don’t have dates of birth. If Laddie or Buddy or Freckles showed up on your doorstep, you could take them to the vet and make a guess as to their birth date, but it’s otherwise unknown.

The sadder corollary to this is that many graves don’t list dates of death. I come across a grave for Richard and Gaia, born 1955 and 1956 respectively. “Two gallant poodles,” exults the headstone. A photo of the pair is attached, but has faded and cracked into illegibility over the decades. Richard and Gaia’s parents are noted as a colonel and his wife, and immediately, I picture a post-war scene of a military man in full regalia, back from the war, driving a roadster around the suburban streets of Roseville or Richfield or Bloomington, his gallant poodles with their heads out the window, tongues wagging. 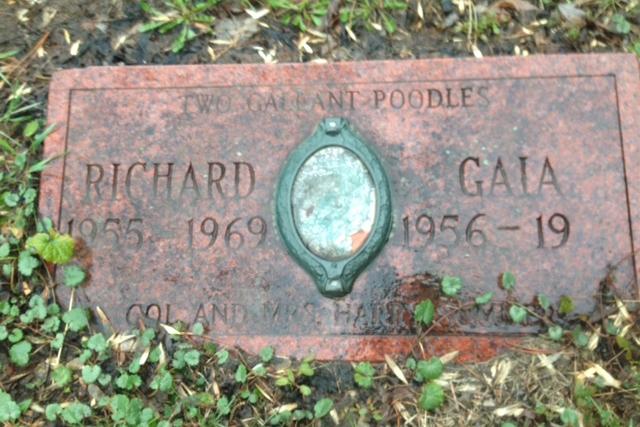 But the scene gets sadder when Gaia is considered. Richard died in 1969 at the age of 14 – not bad for a poodle – but we don’t know when Gaia died. Gaia’s date of death is left blank. What happened to Gaia? Is she buried here? Did she outlive the colonel? Did the colonel and his wife bury her elsewhere, or did they forget Gaia entirely? Did they not want to pay for the second engraving? It’s hard to know.

Gaia is not the only pet without a date of death carved into the headstone. There are other phantoms. In my rain-soaked, chill-racked brain, I begin to consider the possibility that, hmm, maybe these pets are still alive, 40 and 50 years old. Maybe they’re a little worse for wear, but still doddering across the den to their food bowls as their masters look on and smile. But I know that’s just denial of the sad fact that pets’ lives are, in human terms, short. If you have a pet as a child, it’s almost guaranteed that the pet will die many, many years before you. Maybe it’s that fleetingness that drives people’s unvarnished affection for these companions in death.

The theology is fascinating, too. Crosses abound, as well as a smattering of Stars of David and Hebrew text. My friend Natalie, who’s walking the cemetery with me, notes that when her childhood pets died, her father would bury them in the backyard under makeshift crosses. The crosses didn’t necessarily serve a liturgical purpose, but rather stood as a gesture toward broader ideas about eternity and remembrance. 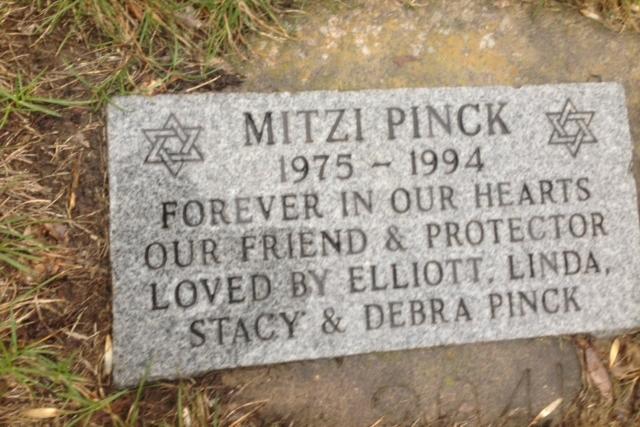 The religious references here on the gravesites do the same – it’s difficult to know what the owners’ theological beliefs were in reference to their pets, but the inclusion of so much iconography indicates a spiritual yearning people feel in relation to their pets. Not a literal sense of “My dog accepts the teachings of Jesus Christ,” but more a sense of “I will see my dog again someday.” A cross if you’re Christian or a Star of David if you’re Jewish is perhaps the easiest way to telegraph that sentiment; a placeholder for eternity. 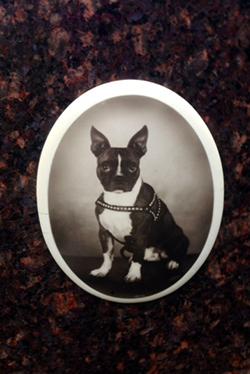 I leave you today with this image of a Boston terrier named Kooky that stuck with me in particular. Kooky was born September 11, 1941, and died November 21, 1952. His owners – Mr. and Mrs. P. Zuehlke and Mr. and Mrs. K. Spielman – commissioned a very lovely black-and-white image of Kooky, bedecked in a harness and looking very serene. My etymological dictionary places the modern definition of “kooky” as a synonym for “crazy” or “zany” in the late ’50s, so Kooky was clearly ahead of his time.

Kooky’s timeline is very interesting to contemplate. He (assuming he’s a “he”) has been dead for more than 60 years. The Zuehlkes and Spielmans may still be living, but if Kooky came into their lives in adulthood, it’s less likely. It may be that there are no living memories of Kooky, and if there are, it seems a stretch to think that the children of the Zuehlkes and Spielmans, who might have loved Kooky as children, come to visit him regularly in their 60s and 70s. But here he is, looking – in that Boston terrier way – both a little bit silly and very dignified. He might remind you of your dog, who’s been dead for 10 or 30 or 50 years. Here he is, little eyes bulging out, forever waiting expectantly for you to tell him he’s a good boy.

And he is. Good boy, Kooky.

In this pet cemetery, the phantoms are all still waiting to please