Tammy Faye Bakker only lived in Minneapolis for about a year, through 1960 and 1961, before setting off for the fertile evangelical grounds of the South, where she and her husband, Jim Bakker, would launch their wildly popular and profitable TV ministry and later theme park, and then be thoroughly humiliated and disgraced by a sex scandal, accusations of financial wrongdoing, divorce, and ultimately for Jim Bakker, prison time.

So it’s only one year here, and it’s before all of that. On the scale of dubious, tenuously connected local celebrity claims, living here for one year probably puts Tammy Faye Bakker below even Bob Dylan, who remains the gold standard for dubious, tenuously connected local celebrity claims. (Look, I love the guy, but he only lived here for a year-and-a-half!)

But Tammy Faye Bakker’s year here was quite eventful; Minneapolis is where she and Jim Bakker met, married, and began their ministry. In the years since her death, Tammy Faye’s reputation has been rehabilitated almost completely; far from being recollected as a televangelist huckster and butt of late-night talk show jokes, she’s quite warmly remembered, variously as a memoirist, endearing media personality, cancer survivor, idiosyncratic fashion emblem, and even a sort of gay icon, owing in part to her support for LGBT rights.

The Bakkers’ story also takes place during an interesting time in the city’s history, when it was a hotbed of postwar evangelical activity – Minneapolis is generally regarded today as such a secular, left-leaning burg that it’s easy to forget much of its history has been shaped by both conservative and radical religious movements. But in another sense, it’s also a Minneapolis we recognize today, in one specific aspect: as a place where young, small-town Midwesterners come to get a fresh start in the city. Tammy Faye LaValley grew up in International Falls, Minnesota, and Jim grew up in Muskegon, Michigan; both came to what Tammy Faye called “the big city” to go to college, and both were eager to leave their impoverished small-town communities behind for good. Maybe you left just such a small town behind yourself. It’s still a popular narrative.

Fortunately for us, most of the Bakkers’ story in Minneapolis takes place within a fairly limited geographic scope, making it easy to see at least a half-dozen Tammy Faye sites in a few hours on bike or in an automobile.

We begin at the First Avenue nightclub, once home to the Greyhound Bus Depot. Tammy Faye took a bus down to Minneapolis from International Falls, and the downtown she would have stepped into was in a period of transition. Nearby, the old skid-row section was being razed, but she would have just missed shiny new developments like the Sheraton Ritz Hotel (completed 1963) and the Northwestern National Life Building (1964). “It was like a dream come true,” she wrote later. “The minute I stepped off the Greyhound bus I was already staring up at the huge skyscrapers – well, at least to me they seemed like skyscrapers, though probably most of them weren’t over twelve stories tall.” 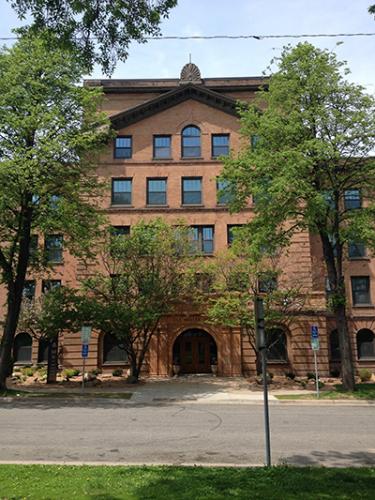 MinnPost photo by Andy Sturdevant
The heart of the North Central University campus is still the old cluster
of Asbury Hospital buildings, which retain a gracious, ivy-covered quality.

A 10-minute drive across downtown brings us to North Central University, known in the 1960s as North Central Bible College. Tammy Faye described the school as “a stately campus, shaded by majestic elms and maples, with ivy clinging to every building.” This Assemblies of God-affiliated school still generally fits this description, though today it’s quite a bit more expansive than the campus where Tammy Faye and Jim Bakker met in 1960. That year, the school was about 30 years old, but had only had a four-year program since 1957. It had been on the site of the old turn-of-the-century Asbury Hospital since the mid-1930s – some of the older buildings still bear the name of the old hospital today. Today, North Central spans a few city blocks, having constructed new buildings in the 1970s, and acquired quite a few older adjacent structures in the 1980s and 1990s. The heart of the campus is still the old cluster of Asbury Hospital buildings, which retain a gracious, ivy-covered quality.

A few years ago, when Jim Bakker was on trial and eventually sent to prison in Rochester, the local media eagerly sought comments from North Central on the couple and their tribulations. The school’s administration was understandably nervous about associating with two non-graduates from previous decades; the president nervously non-explained to the Star-Tribune in 1988 that he couldn’t comment because “no one who was at the school then is [here] now.” I didn’t attempt to get any information from the school, but even today, the few students I encounter on-campus didn’t have much to say on the subject of the college’s most famous former student.

The Bakkers married almost immediately — more on that venue in a moment — and were summarily expelled from the college. “Apparently the rule was that a man and woman could enter college if they were already married,” Tammy Faye wrote, “or they could marry once they graduated, but not one moment before.” Jim had been in three semesters; Tammy Faye only one.

During her brief tenure, Tammy Faye would have most likely lived in Miller Hall, on Elliot Avenue at 14th St., located precisely where the diagonal downtown grids snaps into its north-south configuration. The top floors of Miller Hall are still all-women’s dormitories today, and it houses the school’s technology lab and admissions offices. Built in 1902, the building overlooks Elliot Park and has a terrific view of the downtown skyline. It’s also Miller Hall where Tammy Faye first caught hall monitor Jim Bakker’s eye. “You are going to develop a reputation,” he is supposed to have warned her after returning home after curfew one evening from a group date.

The front entryway this first encounter took place looks out on the park that gives the neighborhood its name. Elliot Park is one of the most underappreciated neighborhoods in Minneapolis, a truly urban collection of old buildings, brick apartments, small businesses, and parks, all preserved in isolation by the fact that the neighborhood is somewhat strangled off from the rest of the city by the interstate immediately to the south and the vast nowhere of Metrodomeland to the north. It’s almost a given that when Tammy Faye writes about her freshman-year dates with Jim “to pool our resources to get a hamburger and share it,” she’s talking about the Band Box Diner, virtually unchanged since the early 1960s.

A short trip on the Chicago Avenue bus would have taken Tammy Faye to her job in downtown Minneapolis, a women’s clothing boutique called The Three Sisters located at 602 Nicollet Avenue. This would have been a pretty chic position – Three Sisters was two stories high on the corner of Nicollet and 6th, with a huge marquee and a nearly all-glass art deco-style façade. “To my amazement … they carried sizes 1 and 2,” wrote the 4’11” Tammy Faye later. “For the first time in my life I had clothes that actually fit me.” The site is of course now the much less glamorous Office Depot at City Center. The management of City Center has endeavored to make the famously ugly exterior a little livelier with colorful banners in recent years, but the north end of the building doesn’t even get those modest improvements. 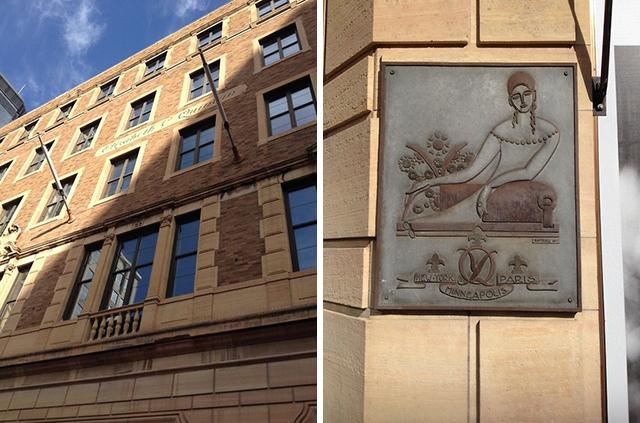 Jim worked a few blocks down Nicollet, in a similarly glamorous building, albeit in a much dumpier position. He delivered food and scrubbed dishes at the restaurant at Young-Quinlan Department Store, located at 901 Nicollet Avenue. The Italianate department-store building is one of the gems of the old downtown commercial district – the Jazz Age-styled plaque on the side that reads “NEW YORK – PARIS – MINNEAPOLIS” gives a good indication of the store’s aspirations and its commercial reach. Today, there are still young people scrubbing dishes, in the Dunn Brothers coffee shop on the Nicollet Mall side.

It’s the Minneapolis Evangelistic Auditorium – known before that as the Loring Theater and today as the Music Box Theater – that’s the best-known local Tammy Faye-related site. A few years ago, during the brief period when the theater had reverted back to its original Loring name, it threw a celebration on the 50th anniversary of the Bakkers’ wedding with a screening of the acclaimed documentary “The Eyes of Tammy Faye,” a symposium, and a ’60s-themed wedding party. 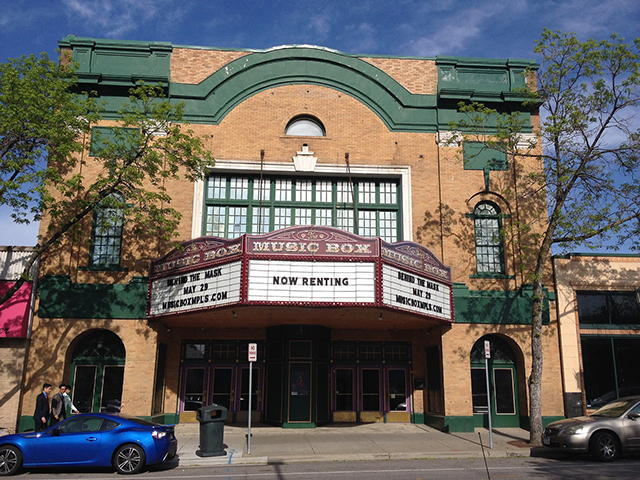 MinnPost photo by Andy Sturdevant
It was in the basement of this building, on April 1, 1961, where Tammy Faye and Jim Bakker were married.

Jim was a youth pastor there, and Tammy Faye sang in the choir. It was in the basement of this building, on April 1, 1961, where Tammy Faye and Jim Bakker were married by the congregation’s pastor in a small ceremony consisting of six people. She describes the basement as having been “renovated to make an absolutely gorgeous prayer room. The walls were hewn of rock, carved with pictures of Jesus from different periods of His life. The floor was covered with plush carpeting, and in the middle was a round bench surrounding a sculpture of Jesus and Mary.” In fact, the basement still looks a little bit like this. The murals from that time, of the Holy Land, are still on the wall.

Lastly, there’s the apartment where the newlywed Bakkers lived, described by Tammy Faye as “a darling apartment with furniture and stuff from the Goodwill .…We put together a superb little place, complete with wall-to-wall carpeting, which we sewed together from scraps.” Finding short-term addresses for transient Minneapolitans like Jim and Tammy Faye – a young, non-established couple who’d be moving away in only a year or two  – can be difficult. I found a wedding record with no associated street address, and a look through the city directories of that time doesn’t turn up anything during the 1961-’62 period. There is a James Bakker listed a year or two after that, though. There aren’t a lot of Bakkers in the city at that time, so maybe there’s a connection, or maybe it’s an old listing that was included without being properly updated. Since it’s the closest I can find, I decide to go look at it anyway. 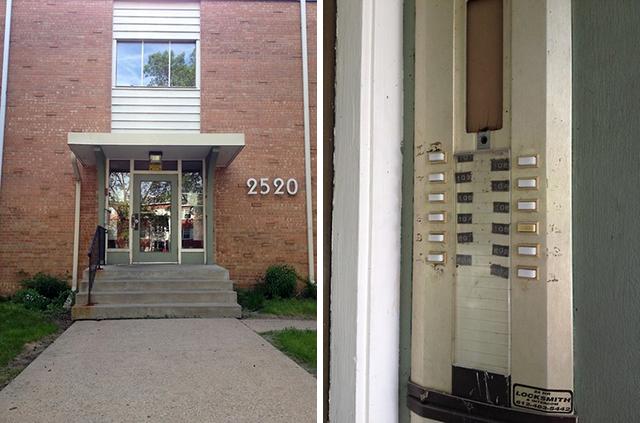 It’s an apartment building in Whittier, at 2520 Pillsbury Avenue, constructed in 1960. It isn’t one of those nice, old brick four-plexes, but one of those big-windowed modernist boxes that imparts a certain semi-charming utility if you look at it from the right angle. Even if it isn’t the right building, it’s not far from the Evangelistic Auditorium, and generally looks like the sort of place newlyweds might live, even today. Maybe it’s not where they lived, but it’s probably pretty close. Whether it is or not, they’d leave it by 1962, driving across country to take what they’d learned in Minneapolis from their year creating a ministry on Nicollet Avenue, and make themselves two of the most famous people in America only a few years later.

Thanks to Gerry Carlson on correcting the name of the Evangelistic Auditorium.

Tammy Faye Bakker’s year in Minneapolis: scoping out the sites, from college to marriage and ministry