It might be useful to begin by pointing out that, in the Twin Cities, there are three Mississippi Rivers. Not literally, but in a sense. We — and by “we” I mean “I,” or at least until I spoke to handful of knowledgeable people in the course of preparing this column — tend to think of the Mississippi as a monolithic entity. It isn’t.

Each of these three rivers has its own set of peculiarities and idiosyncrasies that determine how people have interacted with it over the years, and how it can be used — or use us — for purposes as disparate as industry, recreation, and habitation.

The first is the prairie river, which is the Mississippi from the headwaters in Itasca as it lolls its way down to the St. Anthony Falls and the locks there, on the banks of Minneapolis. It has defined banks. It has no flood plain. It’s not, as they say, meandering.

The character changes when the river arrives at the soon-to-be-shuttered Upper St. Anthony Falls Lock and Dam, right in downtown Minneapolis. Here it becomes the second river, from the falls to the top of the bend near downtown St. Paul — this is the river of the gorge.

The third river, and the one of interest to us today, is where the Mississippi grows up. Below the gorge it becomes the wide, meandering river we (again, “I”) have most commonly imagined it to be. It’s useful to keep this last part in mind when returning this week to the banks of the Mississippi River under downtown St. Paul.

The river down here is much different from that in Minneapolis. For the most part, it’s in a floodplain, where the water levels rise and fall pretty dramatically. If you go down there this week, you’ll find the water very high after all of the rain, lapping up against and in some cases overtaking some of the amenities and structures closest to the river.

St. Paul is up on the edge of those bluffs, back turned to the river. You can see where there’s a disconnect between city and river that has an actual physical barrier. 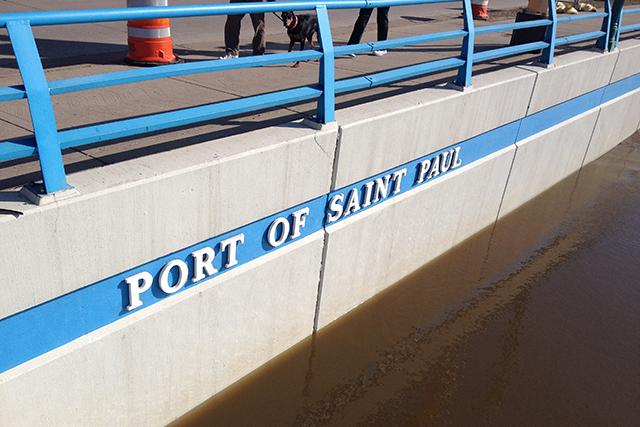 MinnPost photo by Andy Sturdevant
The Mississippi in St. Paul feels like more of a working river than up by downtown Minneapolis.

This part of the river in downtown St. Paul is still where most of the barge traffic happens. In that sense, it sometimes feels like more of a working river than up by downtown Minneapolis. Starting at Lambert Landing near Lowertown (“PORT OF ST. PAUL” reads a sign on the river) and walking the mile underneath the Robert and Wabasha bridges to what’s now known as the City House, you see barges of all sizes docked up against the edge of the river.

When inspecting one such covered barge, sagging low in the water under the weight of its cargo, I notice a familiar place name. Its port of origin is Jeffersonville, Indiana, on the Ohio River not far from where I grew up, over 700 miles away. It’s in seeing these barges and thinking about their points of origin that you begin to understand the enormity of the Mississippi’s role as a central nervous system for commerce in the interior United States. So many of the important cities of the East, Midwest and South — Pittsburgh, Cincinnati, Omaha, St. Louis, New Orleans, Memphis — are connected to each other culturally, historically and economically by this river and its tributaries. This is maybe why St. Paul, with its breweries and steeples and barges, often reminds me more of other German Catholic river towns like Cincinnati or St. Louis than the flat, Protestant Plains cities to the west and south. 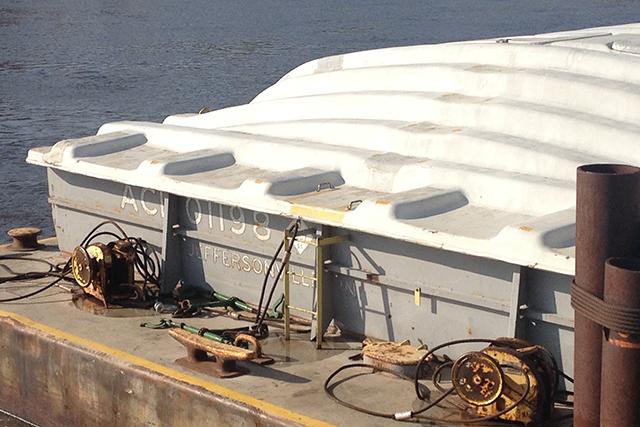 Of course, I don’t inspect the barge too carefully. The river looks placid from a distance, gently rolling along, but up close, you can see it churning away in the areas between the barge and the docks. I watch a stick floating down the river get caught in an invisible riptide, then be sucked violently under the barge, and I think of a passage from Captain Bob Deck’s great St. Paul towboating memoirs “Deck on Deck,” published in 2010. Here Deck is speaking to his captain, right before stepping aboard his first barge in the 1970s. The captain informs him of “rule number one”:

Then he turned and stuck a finger in my face. “And rule number one is: Don’t fall in! If you fall in the river, you are dead! It’s that simple.”

“Well, yeah, I guess I wouldn’t want to drown.”

“Hah! You’d be lucky to drown! More’n likely you’d get chopped into pieces by the propellers. They’d suck you right under the boat and cut you into bait.”

Of course this refers specifically to falling off a boat or barge, but you can see where falling even from the banks could be deadly. The river is powerful and capricious. 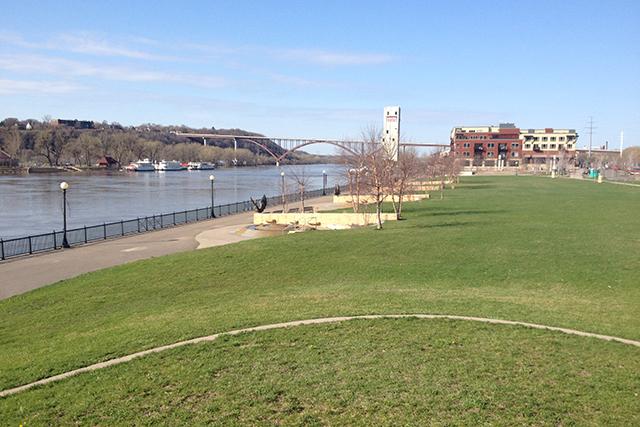 MinnPost photo by Andy Sturdevant
There are a handful of these mounds below Shepard Road, in the public green spaces, built during some of the renovations in the past decade.

On a recent walk, Dan Dressler of the National Parks Service pointed out some little-known public art flourishes that commemorate this power and capriciousness: the so-called flood mounds. There are a handful of these mounds below Shepard Road, in the public green spaces, built during some of the renovations in the past decade. They mark the heights of flooding over the years, the highest one commemorating the flood of 1965. Standing atop it and surveying the floodplain, imagining all of it below water, you begin to understand the challenge that St. Paul has historically faced in connecting to this part of the river — the difference between where the river sits now and that height is pretty significant. 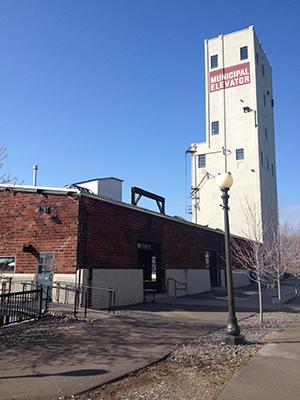 Of course this power can be harnessed to great effect. The story of the St. Paul Municipal Grain Terminal and Sackhouse — now known by the pleasant but pointedly neutral name “City House” — is instructive in how the river can be used as an economic and political tool.

The Grain Terminal was built beginning in 1927, the work of the Equity Cooperative Exchange, a collective of grain farmers throughout the Midwest who were determined to bypass the monopolistic grain and milling interests based in Minneapolis. In fact, if you read contemporary accounts, farmers in the region used “Minneapolis” as a metonym for the entire fat-cat crony capitalist system that makes current use of “Wall Street” seem tame in comparison.

By owning and operating their own grain terminal in St. Paul, the idea was that the cooperative could compete with the railroads as a way of shipping product, and directly control the flow of grain from the farms into the urban markets, unencumbered by the machinations of the Minneapolis Chamber of Commerce and the various milling associations that worked in collusion with the railroads to monopolize the grain trade.

It largely worked. In fact, only a few decades later, the idea of a farmers cooperative was pretty uncontroversial in the Midwest, an accepted part of the economic reality that would have been considered wild-eyed radicalism in the first decades of the last century.

The Grain Terminal had fallen into disrepair in the latter half of the 20th century, and a lot of the infrastructure surrounding it fell into decay or was razed in various revitalization efforts of the years. Now restored and used as an event and meeting space, it’s very picturesque — the elevator itself has been given a fresh coat of white paint and period lettering that would make a Red River wheat farmer weep tears of pride. It also serves as an important historical marker in the area, a quiet reminder of the ways in which the river can be a tool for economic, political and cultural power.

These debates over how the river will be used continue. When I spoke to Whitney Clark of the Friends of the Mississippi River recently, he contrasted the vision of Minneapolis Grand Rounds originator Horace Cleveland — the riverside as a public-spirited parkland that belongs to everyone — with some of the recent residential developments along the waterfront, which put access and enjoyment largely in private hands. The questions over how to handle the old Ramsey County jail (memorably dubbed “SPACEJAIL ’79” by writer Nate Patrin after last week’s column) provide a quick glimpse at how some of these development issues might play out. How can these sites be developed? Can moves once hailed as improvements and now seen as mistakes be corrected? Who — and maybe this is the most important question — is the river for?

An important first step in answering that question might be to claim ownership of the river yourself as a key part of the history, culture and civic identity of the Twin Cities.

Enjoying the panoramic view from the plaza atop the old jail and then walking down below to Shepard Road and taking in the docks, the place names painted on the sides of the barges, the recreational facilities, the historic buildings, the remnants and survivors of industry, the private developments, and the rest of it, you’re walking beside a cultural and natural asset every bit as important to us as mountains and oceans are to other great cities. That’s something to bear in mind when considering what will be done with the river and the surrounding lands in the coming decades.