The headwaters of Lyndale Avenue, its Lake Itasca, is in a parking lot at the end of a dead end road in Brooklyn Center, in a 300-foot-wide strip of land wedged between I-94 and the Mississippi River.

From these humble beginnings, Lyndale begins its 20-mile trip through Minneapolis and Bloomington, tying together such great and disparate local institutions as the Minneapolis Impound Lot, Intermedia Arts, Bachman’s Floral, and David Fong’s. When I first moved to town, a local guy told me, “Everyone is going to tell you Hennepin Avenue is where everything happens, but that’s not true. Lyndale Avenue is far superior.” (He really did talk like that.) Years later, I still believe he was right.

I’m not specifically looking for the Lyndale Avenue headwaters, but I find them anyway. I’m more interested in walking the northern border of Minneapolis, 53rd Avenue North, which divides it and Brooklyn Center. I love walking borders, though they’re rarely as dramatic as I imagine they’re going to be. But along the northernmost parts of the city, you can find some interesting places where the city dissolves into the suburbs.

But back to the Lyndale headwaters. Lyndale itself, as marked, actually begins when 57th Avenue North makes a turn south. But if you follow it past that, there’s a small access road that leads a few more blocks north. I-94 is built very close to the river, but not quite all the way on it, thanks to the efforts of the Parks Board, which battled for years to make sure the riverbanks would remain parkland. This leaves a little strip of land from the northern border of the city to the Warehouse District. This strip was once a flood-prone site for light industry, barge landings, brickyards, quarries, squatters, trailers, and early public housing projects. Among these was the old Minneapolis Workhouse and farm at 49th Avenue North, a long-disappeared Dickensian hellhole where orphans, spinsters and others toiled away in what we can only imagine was abject misery.

In fact, all of it’s gone now, for the most part. That strip is now the bucolic North Mississippi Regional Park. It was developed beginning in the 1960s and ’70s, right about the time the freeway was being built. The parts of the park just north of the city were developed even later.

Walking down Lyndale Avenue in Brooklyn Center, north of the Minneapolis border, you have the impression of walking down a tree- and electrical wire-lined country road. In fact, the most prominent structure you see along the way is a sturdy, white little brick farmhouse at 55th Avenue North, built in 1878 and looking straight out of Olmsted County. Most of the surrounding buildings date from much later, around the early to mid-20th century. But the general impression you get is that you could be in any small town 50 or a hundred miles outside the cities. The Brooklyn Center street signage, with its rustic wind vane motif, contributes to this sense.

Of course, this is just a visual impression. Sonically, you understand you’re in a strange marginal space. To your west, traffic blows by on I-94. To the east, the river flows by. The strip is narrow enough that this distinction is often a matter of feet. Walk down the west side of the road, you hear cars. On the east side, it’s birds and water.

There’s an interpretive center and parking lot right at Lyndale and 53rd Avenue North, where Minneapolis begins. Once you walk over I-94, you’re walking the border.

It doesn’t explode dramatically, as if you walked out of a farming town into North Minneapolis. At first blush, in fact, there’s little that seems to differentiate the two sides of the border. South of the border, along the freeway noise wall, there’s one of those dinky metal “Minneapolis City of Lakes” signs posted over a speed limit sign. On the north side, there’s a very new sign reading “Welcome to Brooklyn Center/Bellevue Neighborhood.” Otherwise, you’d have to be really observant to note the changes in the physical landscape. 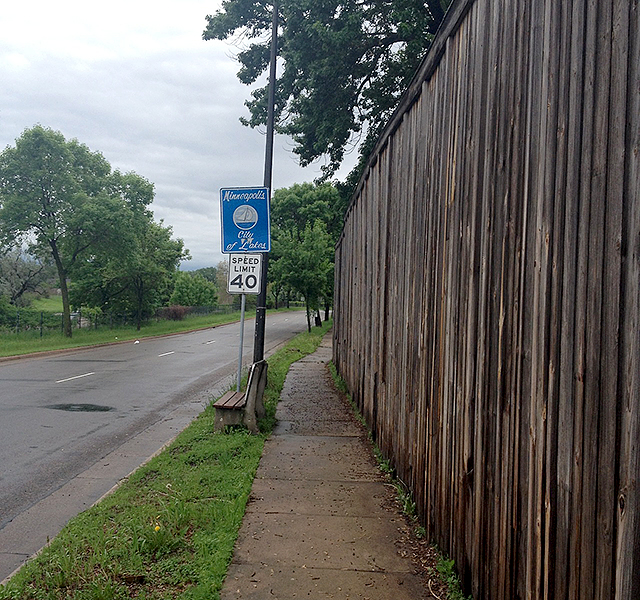 MinnPost photo by Andy Sturdevant
South of the border, along the freeway noise wall, there’s one of those dinky metal “Minneapolis City of Lakes” signs posted over a speed limit sign.

But there are subtle differences. The Lind-Bohanon neighborhood of the larger Camden community just south of the border looks like a lot of other outlying neighborhoods of Minneapolis, whether it’s in the north, south or east. It’s a collection of small, tidy worker’s cottages mixed in with GI Bill-era ramblers, with sidewalks and gridded streets and a canopy of trees. Camden, like Brooklyn Center to the north, is named for the more famous city in the east.

Lind-Bohanon, like many Minneapolis neighborhoods, takes its name from the school located there, Jenny Lind Elementary, which in turn took its name from the internationally famous 19th century Swedish singer (a quick side note: other Minneapolis neighborhoods named for schools named for 19th century celebrities: Bancroft, Sheridan, Whittier, Longfellow, Howe, Cooper). The yards and houses are modest, but neatly decorated; some decorative trim on a garage here, a birdhouse-bedecked foil cross on a fence there. On a Sunday afternoon, there’s some activity in the neighborhoods, but for the most part, it’s pretty quiet. The park on the other side of the interstate is much busier.

The Brooklyn Center side, the more you look at it, looks less like the Minneapolis streetscape. There are fewer cottages and less stucco, for the most part. There is a very new-looking black fence running the border, accompanied by a meandering, blacktop sidewalk. The developments are much newer, more — how else can I say this? — suburban-looking in nature. Fewer blocks have sidewalks. Between I-94 and around Humboldt Avenue North, in fact, it’s a more striking difference between city and suburb that you might notice even if you weren’t looking for it. For whatever reason, that divide eases out further to the west, and the transition becomes more porous, the two sides of the border sharing more similarities in architecture and housing stock.

Of course you can’t really see any of this from the interstate. It’s sandwiched between sound walls, and while it does afford amazing views of the remaining industry along the river and the downtown skyline, it’s hard to get a sense for the neighborhood below. There are two interesting sights, visible only from the highway, that give some sense, though.

Patron saint of the interstate

The first is, when you’re entering Camden, the marquee letters from the old Camden Theater, placed on the front of a medical clinic that arches up perfectly across the top of the building, easily seen from the highway. It’s a nice welcome to a community that probably has less name recognition broadly than its neighbors Near North or Northeast. Of course the whole area is broadly referred to as North Minneapolis, but Camden itself is a distinct community from the better-known part designated Near North.

The second is, much to my bafflement, a sight visible only from the highway. I note my bafflement here because I spent the better part of an hour trying to figure out how to see this sight from the ground, to no avail. Atop a pole, there’s a vintage red convertible, with a figure (it looks like it might even be Jesus) poking his head over the top, the side of the car decorated with the words “Psalms 46:10.” That’s a verse that’s actually about national borders (“I will be exalted among the nations”), which makes it a sort of wry welcome to the city limits. 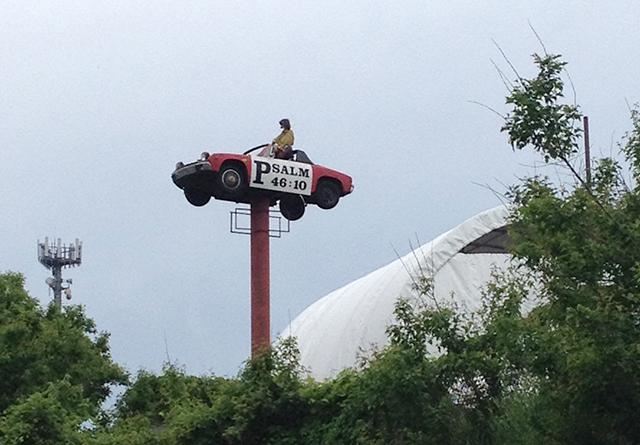 MinnPost photo by Andy Sturdevant
Atop a pole, there’s a vintage red convertible, with a figure poking his head over the top, the side of the car decorated with the words “Psalms 46:10.”

Of course, there’s a whole row of salvage yards, junkyards, factories and storage spaces along the Lyndale strip, all sitting on the precipice of the highway, probably in the same way those quarries and brickyards sat on the precipice of the Mississippi in what’s now the park, a hundred years ago. I talk to a few people on the scene – a hard-hatted worker at the scrapyard, the desk clerks at the storage space – to see if they know anything about it, or where it’s even located. It’s impossible to see from the non-highway side, totally obscured by buildings and locked behind fences. “It has nothing to do with us,” both tell me, and have very little to add on the subject.

Whoever that convertible-driving figure may be, I think of him as a kind of secular patron saint of these marginal areas. He’s driving along between the highway and the river, the city and the suburb, the park and the workhouse. Like a classic saint, you can’t really see him down below on Lyndale, even though you know he’s up there somewhere.

Headwaters of Lyndale Avenue: Bird song on one side, rush of traffic on the other