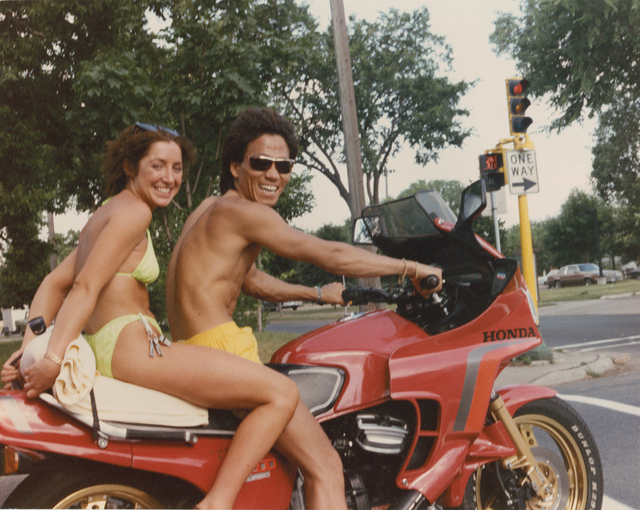 Photo by Charles Chamblis/Courtesy of the Minnesota Historical Society
You could show this photo, with no prompting, to anyone who has spent an afternoon around the chain of lakes, and they’d not only be able to identify the setting, but tell you how it feels.

The abstract of the thousands of Charles Chamblis photographs in the Minnesota Historical Society’s inventory describes the contents of the holdings as follows: “events in the African American community, families, the nightclub scene, musicians, fashion models, weddings, and landscape views, mainly in Minneapolis (including downtown views and parks).”

I like that final workmanlike parenthetical, in the way it brings it all back home to Minneapolis. That final mention by an MHS archivist about the “downtown views and parks” is your clue that Chamblis worked in the public sphere, and that’s where these photos exist. This body of work is a great testament to walking out into the world and seeing what’s all around you. A selection of some of these photos is currently on exhibit at the Minnesota Historical Society through January.

Chamblis was a professional photographer, documenting African-Americans in the Twin Cities from almost the entire stretch of time after his arrival in Minneapolis and beginning of his professional career in the 1960s to his death in 1991. I’d first come across Chamblis’ work — embarrassingly late, I should add — in the 2013 collection “Purple Snow: Forecasting the Minneapolis Sound,” an anthology of Twin Cities funk and R&B from the 1970s and ’80s released by the obsessive archivists at the Numero Group record label.

The record set came with a 144-page hardbound book, containing dozens of photos of the artists profiled, both posed in formal band portraits, and on-stage in clubs around the cities. What great documentation, I thought. I wonder who the photographers were? I was surprised to learn that nearly every photo was from the lens of just one man: Charles Chamblis, whose singular position among African Americans of the time earned him his nickname, the Pictureman. Not a pictureman; the Pictureman.

“He documented our history; nobody else was taking our pictures at the time,” says Flyte Tyme saxophonist David (Batman) Eiland, one of the many musicians featured in the Numero compilation and the MHS show.

The photos of the bands are great, and they’re a big part of the exhibition. There’s obviously a real joy to spotting a teenaged yet entirely recognizable Prince Rogers Nelson noodling away behind a Hammond organ onstage in the 1970s (apparently, Prince purchased all of Chamblis’ photos of himself years ago). Of course in the Numero compilation, these photos are the focus. It’s Chamblis’ photographs that make the compilation work so well.

In his posed band photos, he shoots these regional musicians — only a few of whom would go on to fame — like superstars, like millionaire time-traveling funk-rock science fiction characters in glittery matching outfits and crazy costumes influenced by George Clinton, Soul Train, and that innate strangeness bred in isolated urban areas in the American interior. Hearing this music without having the visuals is unthinkable. And without Chamblis, we just wouldn’t have the visuals.

The everyday made iconic

Great as the band photos are and as important to the documentation of this music scene as they are, it’s Chamblis’ street photography that I love. By all accounts he was an outgoing, gregarious fellow who’d approach people on the street and shoot their portraits with only a half-expectation that he might sell them a print someday. But Chamblis had an eye for capturing totally unremarkable everyday scenes, the kinds you find anytime you walk around your neighborhood, and making them look instantly iconic. Many of these photos feel as if you’ve known and lived with them for years. 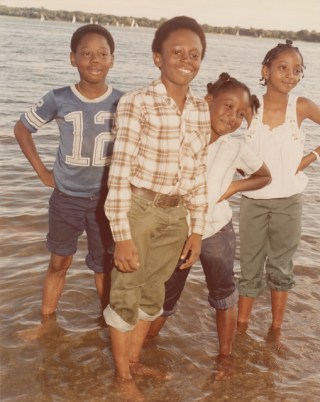 Photo by Charles Chamblis/Courtesy of the Minnesota Historical Society
What it feels like to be young, outside and running around
with your friends on a hazy summer day.

The shot of the four kids in Lake Calhoun, dating to 1985, is one such photo. It’s been mentioned specifically in almost every write-up of the show, and for good reason. Two boys and two girls, pants rolled up and mid-calf in the water, look off to the right, posing with hands on hips.

They look, as kids often do, as if they can barely contain their glee at being the center of attention. Look at the girl third from left, maybe trying to look cool by striking a fashionable pose for this photographer, but whose face contradicts the studied quality of that pose by looking as if she’s about to burst with joy. And that young man in the center looks at Chamblis beatifically — at once curious, guileless and a little bit mischievous — telegraphing immediately what it feels like to be young, outside and running around with your friends on a hazy summer day.

Or the young couple on a Honda motorcycle, blowing through a summer afternoon in swimsuits near what looks a lot like Lake Calhoun, one of those baffling parkways that circle the lakes and wind up getting you lost in the bird sanctuary for half an hour. You could show this photo, with no prompting, to anyone who has spent an afternoon around the chain of lakes, and they’d not only be able to identify the setting, but tell you how it feels. It feels like this photo looks.

You’re more likely to see longboards or scooters or 10-speed bicycles than Honda motorcycles out near Lake Calhoun these days, but the feeling of being with someone out for the afternoon against a backdrop of parkways, trees, and lakes is as familiar as ever.

‘Give me a smile’

Writer Peter Scholtes quotes Chamblis’ friend Roosevelt Gaines in an interview: “He’d say, ‘Turn this way, give me a smile.’ He didn’t like to take pictures where folks were all sad and depressed. Because there was a lot of sadness going on back in those days. He wanted to get the best shot of you that he possibly could.”

To that end, there is something incredibly optimistic about these photos. Those were times with a lot of sadness going on, as Gaines notes. The exhibition alludes to the racism of the white community, and the difficulty for African-Americans in getting work, whether in the larger professional sphere or more specifically in the local music industry, as well as the sometimes violent deaths of a few of the subjects. But Chamblis’ photos capture the day-to-day joys of social events, shows, parties, gatherings, and just general lake-based recreation in a way that doesn’t ignore those factors, but defies them all the same.

The exhibition also invokes a quote by American photographer Jerry Uelsmann, whose work Chamblis admired: “the camera is a license to explore.” Uelsmann’s surreal, photomontage-based work couldn’t be more different than Chamblis’, but Chamblis took that idea to heart. 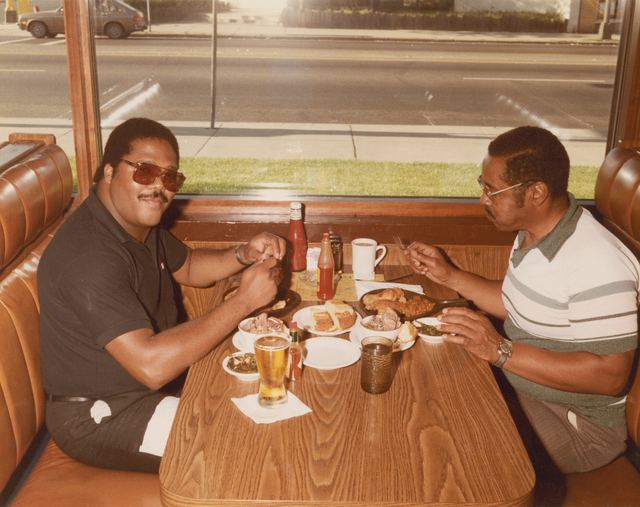 Photo by Charles Chamblis/Courtesy of the Minnesota Historical Society
Chamblis’ work is imbued not just with a love for people, but a love for the places they live, work and play.

His work is imbued not just with a love for people, but a love for the places they live, work and play: nightclubs, parks, lakes, restaurants, fashion runways, clubhouses, shops, and backyards. There’s a curiosity about people’s lives, and how they operate in those spaces. It’s that interactive component that makes these photographs so resonant, recognizable and joyful, decades after the places they depict have disappeared.