One of the earliest memories I have about dining out in Minneapolis was going out to the restaurants in the heart of Eat Street, which in my opinion is between 28th Street and 24th Street on Nicollet Avenue, in the ’90s.  Recently, I walked this four-block stretch of Eat Street for the first time ever because I’m usually driving from point A to point B in this particular neighborhood.

Maybe I do this by habit because growing up, my family just kind of drove from place-to-place here. I don’t remember very much strolling or neighborhood exploring, but then again, I don’t think my parents would have had the patience to take an elementary school-aged kid and two toddlers all over Nicollet. 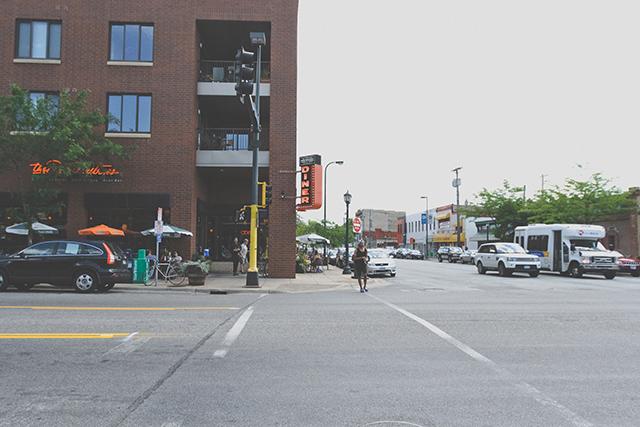 I consider Eat Street the mecca of international food in Minneapolis. There are so many styles of cuisines represented that you can easily have Taiwanese food for breakfast, Vietnamese for lunch and Malaysian for dinner. You could even throw a few German beers or Mexican pastries between meals if you feel like it. Visually, the facades for many of these establishments are so different from each other, each with its own character and personality, further showing off the street’s diversity and eclectic tastes. 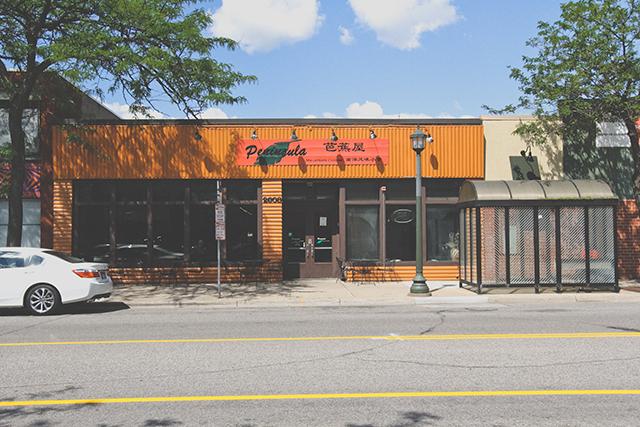 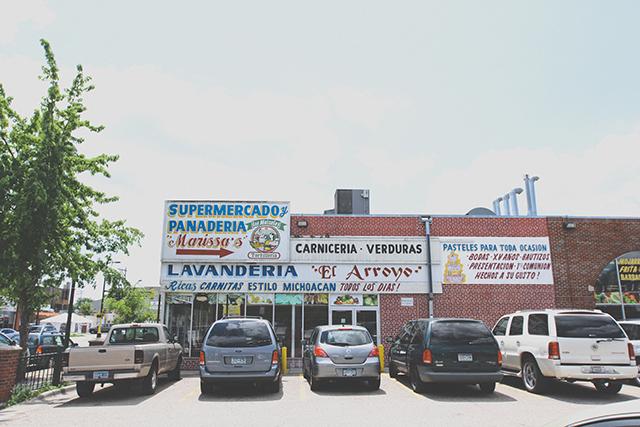 Photo by J. Annie Wang
The colorful signs by Arturo Quintera on Nicollet.

Starting on 28th Street, you’ll see the building for Marissa’s Supermarket and Bakery and the poster-lined windows of food porn on the east-facing side. The building was built in 1916 and was originally the address of a grocer by the name of Margaret O’Brien in 1916 and 1917. Since then, it has been a space for various dairy companies (including Modern Milk Company, which was headed by the son of a state senator) and a Laotian market before it became Marissa’s. The arches of 2750 Nicollet Avenue reflect the commercial architectural style of the early 1900s, but, sadly, I didn’t notice any other signs of its early history as a dairy company. In my imagination, I have this (probably incorrect) image of cows poking their heads out of these arched windows watching the milkmen frantically load their trucks for morning milk deliveries. 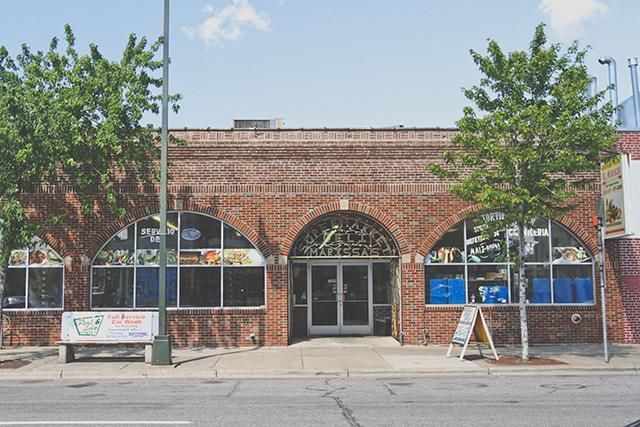 Walking toward 27th Street you see Shuang Hur grocery store on the west side of Nicollet and Quang on the east side. I grew up attending the Taiwanese church over on Iglehart Avenue in St. Paul and as a child, I had to be bribed to go to church. One of the best incentives for going to church was the fact that if time permitted, my parents would take the family out to eat at Quang when it used to be located across the street from its current space. I can remember the warmth of the bún noodle soup and the smell of the fresh mint leaves the very first time I tried it. I have vivid memories of my little sister’s crying tantrums about hot sauce and me whining about wanting another gỏi cuốn (spring roll). 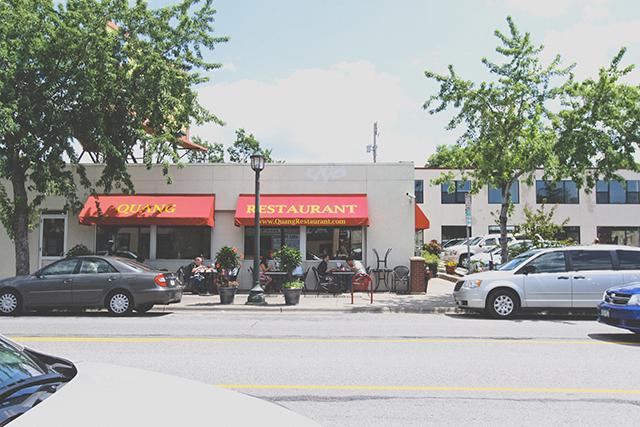 Continuing north toward 26th, you’ll pass Christos Greek Restaurant and two of my favorite food places: Lu’s Sandwiches and Glam Doll Donuts on the left side and the right side of the street respectively. 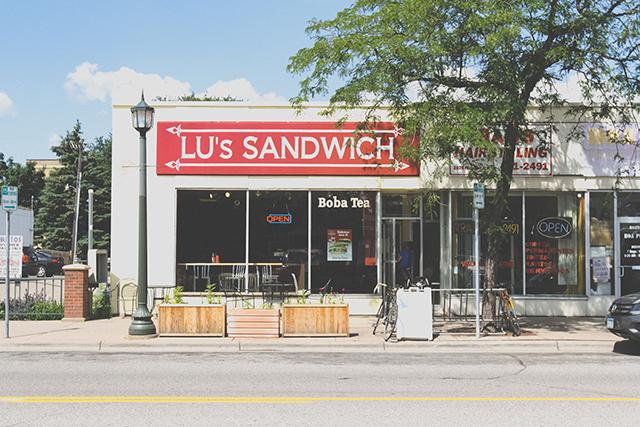 When I need a warm bánh mì on a nice crusty baguette, Lu’s is my first choice. When I need a donut fix, I head straight to Glam Doll for a Calendar Girl (salted caramel and chocolate donut). 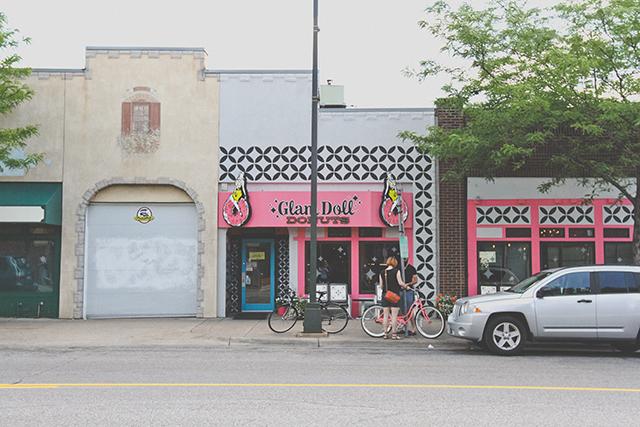 The building that houses PedalPub and Glam Doll matches the style of the adjacent Black Forest Inn restaurant on the southeast corner of 26th and Nicollet. The painted window above the PedalPub garage resembles the aesthetics and colors of the Jack Barkla mural on the west-facing wall of Black Forest Inn. As for Glam Doll, the storefront was recently repainted with retro pink trimming and the formerly beige painted walls were covered with gray paint and a black pattern. The only signs of its pre-donut-shop life is the brick pattern below the building’s capstones. 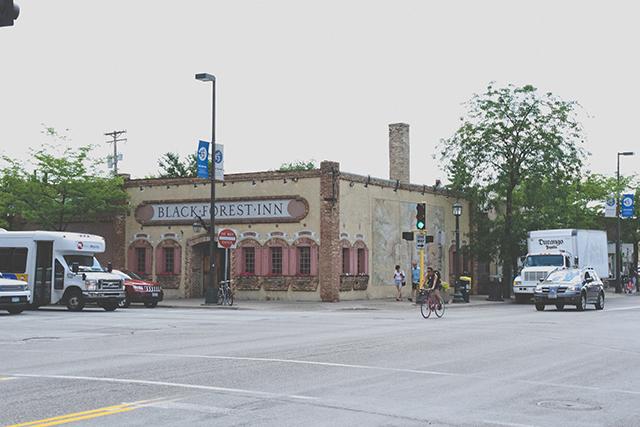 Before Glam Doll, this space used to be a deli called Strudel & Noodle, which was owned by the Black Forest Inn owners. As for the PedalPub garage and its painted window? The company actually rents the garage space from Black Forest Inn and I have a feeling it’s not in the lease to repaint the garage like a beer barrel. 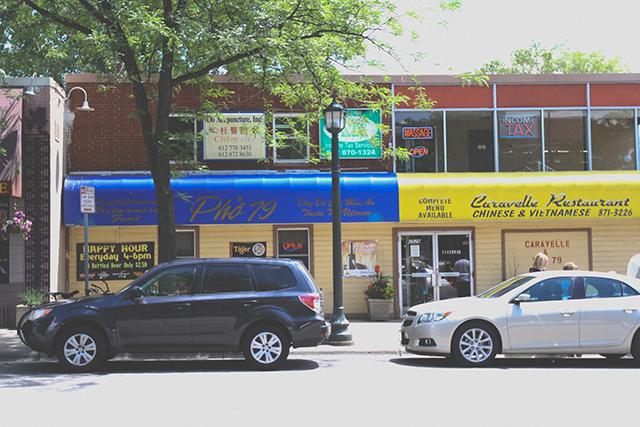 If you’ve never been in the restaurant, one of the things that I find really entertaining is the fact that there are two restaurants in the one space: you head right for Caravelle, a Chinese and Vietnamese restaurant, and left for Pho 79’s Vietnamese noodles. Different members of the same family own each restaurant but perhaps this is an efficient and strategic way to run multiple restaurants while keeping your family close?

A few doors down from Pho79 and Caravelle is Krungthep, a Thai restaurant and the Minneapolis outpost of St. Paul’s Bangkok Deli. The last time I was here I thought I was brave enough to order the spiciest version of a curry and I ended up barely denting my dish because of the heat. The take-away lesson? Always ask for a conservative level of spiciness and work your way up no matter how risky you feel.

On Eat Street, there are a good number of Southeast Asian options but restaurants that offer Taiwanese and Hakka dishes are fairly uncommon in the Midwest. Up the street between 24th and 25th , in the basement of a tiny strip mall, is Evergreen restaurant. Branded as Evergreen Chinese Restaurant, there are just as many Taiwanese and Hakka options than Chinese ones although the three cooking styles are closely related. 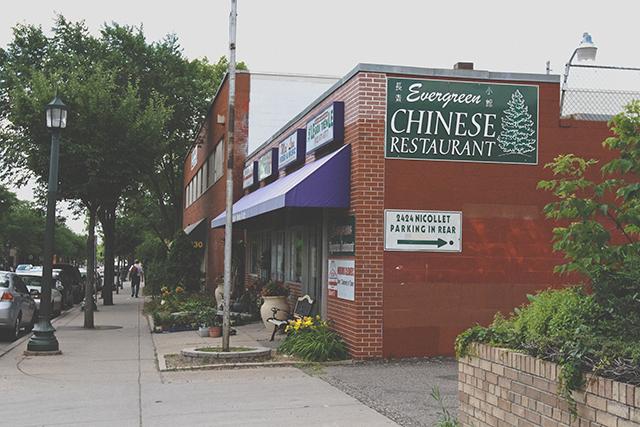 This place was (and still is) a little slice of Taiwan for my parents and quickly became my family’s favorite restaurant from the day it opened. “Now this is what real Taiwanese food should taste like!” proclaimed my dad after trying their Three Cup Chicken for the first time. 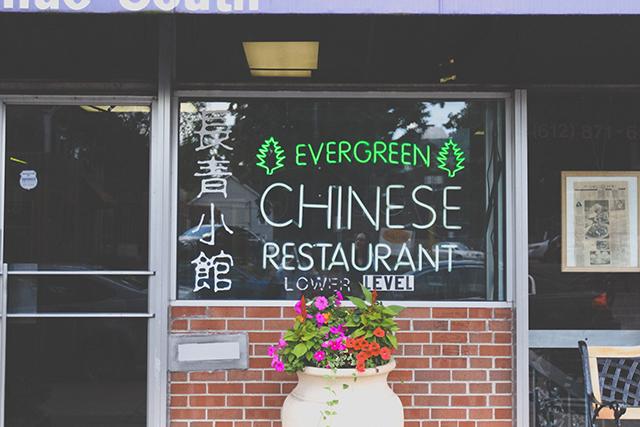 J. Annie Wang is a freelance food photographer, sometimes food writer, and the editor of a new food website called TasteseekersKitchen.com. She can be found at janniewang.com and blogs for fun at fritesandfries.com.