The most useful item given to me in Hungary was the tiny credit card-sized map of the Budapest transit system the woman in the airport tourism kiosk included when I bought my seven-day Metro pass. Like any smarty-pants American traveling overseas, I spent a large part of my trip trying my best to project a cosmopolitan, world-weary demeanor to the rest of the citizens of Budapest that I hoped wouldn’t immediately out me as a leisure traveler (which sort of worked – people mostly thought I was German or Swedish). But I figured if it was OK to act like a tourist anywhere, it was the airport, where they expect it. So I asked the woman at the kiosk for a map, and, expecting a huge glossy thing plastered with advertisements for spas and bars, I was delighted to get a small paper map of the Budapest Közlekedési Központ (BKK) system that folded into the size and thickness of a stack of three debit cards. It lived in my breast pocket for the whole week. At least until I memorized the most basic skeleton of the system, I could pull it out and discretely figure out where I was without looking like a rube. Or at least looking like a German or Swedish rube, anyway.

More than any other one item stuffed in my pockets during the week I spent in Hungary, that map was my lifeline. My good friend Jim was getting married in a small town south of Budapest and I was one of the few non-family Americans making the trip, so for most of the week, I was on my own. The map worked when my phone – set on airplane mode so as not to rack up international roaming charges – couldn’t tell me where I was. Locals complained about the transit system, like they do about the transit systems anywhere in the world, but I loved it. I never waited for more than four minutes for a train the entire week. I spent my second full day in town not really doing much but riding the four lines of the Metro from one end to the other, getting off every so often at a station with a particularly euphonic name (Oktogon, Astoria, Nyugati palyaudvar) and wandering up into the daylight to poke around, drink a beer, look at buildings, and find people to talk to.

Once I told people I’d meet I was a writer, and that I wrote this column about cities and buildings and culture and public art and whatever else, they wanted to know if I was going to write anything about Budapest. I told them I’d like to, but I wasn’t sure how to approach it. What business do I have writing about Budapest, a city I knew very little about and was only spending a few days in? I thought maybe there might be some interesting local angles, but the Minnesota-Hungary connection is not an obvious one. “There are too few of us, and in any case we are scattered,” wrote the St. Paul-based Hungarian cleric Fr. Ferenc Turmezei in 1968 of the Minnesota Hungarian community, which at the time consisted of a little under 800 foreign-born citizens, from a peak of about 5,500 in 1910. “And each of us tends to be an island entire unto himself.” 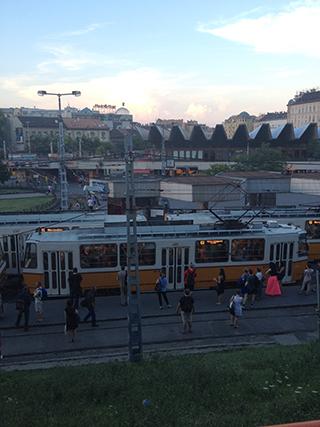 I figured out my approach when I looked at my little transit map, though. As always, it had my answer right there. Departing from the Széll Kálmán ter station at the westernmost end of the M2 line was a bus with a familiar designation: the 21A. That’s right, the same name as our very own Metro Transit bus that makes the long trip every 15 minutes during peak hours from the Uptown transit station to Union Depot in St. Paul. Maybe writing about the entire city in all of its complexity was too imposing a task, but if there’s one thing I can speak to as a nearly decade-long Lake Street resident, it’s the experience of riding a bus called the 21A.

The first thing to know about Budapest is that, like Minneapolis and St. Paul, it’s a pair of twin cities. Buda lies to the west of the Danube, and Pest to the east. The two cities merged in 1873, a decade or two before Archbishop John Ireland led a doomed effort to merge Minneapolis and St. Paul into a combined city here. Listening to locals talk about the two cities has an eerily familiar ring to it: Buda is the older, sleepier, wealthier city, with hills and ancient mansions and roads confusing to anyone who didn’t grow up on that side of the river. Pest is the larger, more modern, more cosmopolitan city, flat as a lángos, where all of the cool bars and contemporary art galleries are. In fact, some of the jokes I’d hear about the two cities were exactly the same. One guy I met gave me the same mock warning I’ve gotten a million times when traveling over the Marshall Avenue Bridge: “Be careful going over to the Buda side. They’ll check your passport.” 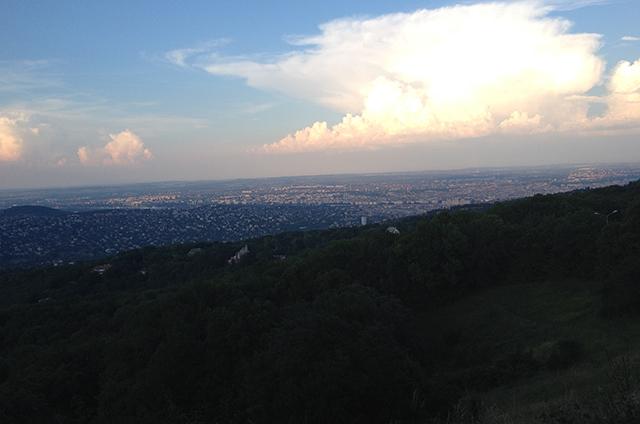 MinnPost photo by Andy Sturdevant
The hills of Buda 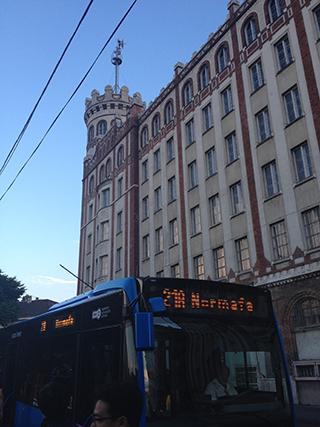 The 21A is on the Buda side; it doesn’t traverse the two twins, but stays confined to a small east-west loop around the Svábhegy section of Buda. I boarded from a rail station that, in Hungarian, is called the Southern Budapest station, despite seeming more western in orientation. The rail station is a charmingly slab-like artifact of the 1970s, the original having been destroyed in World War II. Most of the rest of the area is quite nicely preserved, however. Further out from the city core, the surroundings taken on a more universally suburban quality, but the 21A starts in the shadow of the old Postapalota (“postal palace”), an ornate old brick structure with a turret overlooking Széll Kálmán Square, surrounded by nineteenth century apartment and commercial buildings. The square – known as Moscow Square until a lot later than you’d imagine, 2011 – is a bustling commuter hub where several commuter rail lines, tram lines and bus lines converge. It’s full of commuters, teenagers, panhandlers, street vendors and all the other sorts of people you see in such a place. It felt like a transitional part of the city, leaving the urban core into – well, I wasn’t sure. Suburbs? Residential neighborhoods? Being a connoisseur of the aforementioned cool bars and contemporary art galleries, I hadn’t spent much time on this side of the river.

Budapest is a city full of tourists – not a lot of Americans, but many English, Germans and Scandinavians, in town to take advantage of Hungary’s extremely lopsided exchange rate. In many neighborhoods, including near where I was staying, it was fairly common to hear English and German spoken out in the streets (one waiter I talked to complained that he hadn’t had a Hungarian customer for two days, because none of them could afford to drink there). This is especially true on the Pest side, which houses most of the tourist infrastructure, excepting some of the medieval remains and royal palaces just over on the Buda side. By contrast, being in this part of Buda, further into the interior, one heard Hungarian only, with a lot less English language signage. All my companions on the bus looked like local commuters. 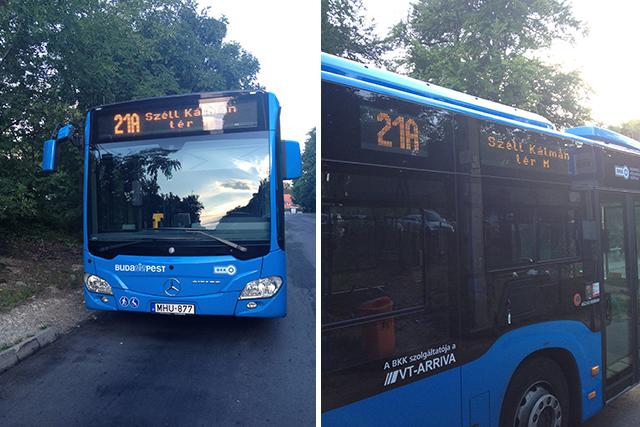 MinnPost photo by Andy Sturdevant
The 21A

As the 21A began a surprisingly steep ascent up some hills, the comparisons to Buda’s east-of-the-Mississippi American twin became easier to make. Svábhegy is a leafy, green section of the city, a little like the tonier, tree-lined parts of Mac-Groveland or Crocus Hill. There were fewer apartment buildings and increasingly larger houses – some not quite mansions, but closer than anything I’d seen previously. I later looked at the Hungarian-language Wikipedia page about the area, which, when Google Translated into English, confirmed my suspicions: “mainly popular in the circles of the rich.” You can feel that sort of wealth hanging in the air – it cuts across language barriers.

A lot of the consulates are located there, as well. This included a nice little nod to North America, the Mexican consulate. I thought for sure the Mexican consulate in the Twin Cities must also be located on the 21A in south Minneapolis on Lake – a really good connection there! – but no, it’s on the West Side of St. Paul. Oh well.

The BKK 21A is a shorter ride than the Metro Transit 21A. The regular 21 goes a little bit further, but the A branch terminates at a stop called Normafa. There didn’t seem to be a lot there, other than a chalet-looking restaurant and a park.

I’d rode the 21A, I suppose, to give myself a context for thinking about my trip in such a way that I could play it off my own experiences here, almost as a rhetorical tool. But the best part of riding the 21A was, really, I had no good reason to be on it, which means the direction it took me wasn’t something I could have planned. Riding a bus just because it has the same name as a bus back home is kind of dumb, but it also served as a great random trip generator, taking me off the main Metro lines deeper into the city in a way I doubtfully would have ventured without the flimsy pretext of the familiar name.

It happens the 21A took me somewhere pretty spectacular. As soon as I walked past the restaurant, I saw a trail heading down a small hill. The 21A’s climb up the hill had been pretty steep, but I guess I hadn’t realized how far up we’d gone. The tree line was thick enough to obscure what was behind it, but I could see the glimmer of sky behind it. I walked past the treeline, and had one of the most stunning moments of the trip. 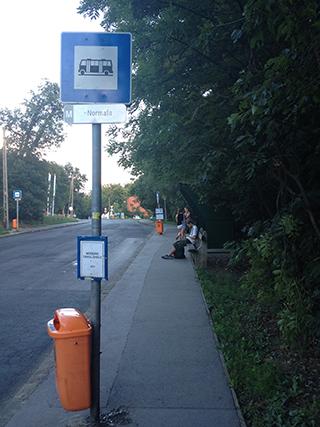 MinnPost photo by Andy Sturdevant
There didn’t seem to be a lot at the Normafa stop, other than
a chalet-looking restaurant and a park.

Normafa is near the top of the Buda Hills, a mountain range to the west of the city. The scene before me was a panoramic view of the Danube River valley, much of the city laid out below. This was completely unexpected. I forget sometimes that topography extends beyond the borders of the Great Plains, and that there are parts of the world where the features of the landscape soar thousands of feet into the air. Travel has this remarkable way of making you feel at once parochial and expansive in your worldview, and standing atop the Buda Hills in Normafa, way outside my element and only there because of the vagaries of international public transit naming conventions, I more or less felt both equally.

And so after a few minutes of looking out at the city, I got back on the 21A – the wait for the eastbound bus was only about four minutes. We headed back down the hills, and at Széll Kálmán Square I got a train back into the Pest side of the river.