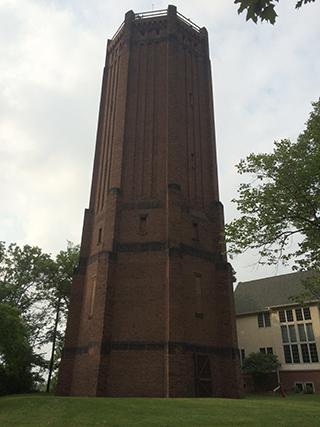 Years ago, I sped past the Kenwood Park Water Tower while biking in the neighborhoods west of the Walker Art Center — only to be caught up short. The tower’s battlement, its narrow, rectangular windows, and the ribs running up its sides all suggest the kind of Gothic intimidation you don’t associate with public utilities. I realized later that each of the alluring, mysterious water towers of our fair Twin Cities likewise tends to appear (with one clear exception) as if out of nowhere, hidden by trees, houses or one’s own ignorance until stumbled upon when you turn south, north, or whichever way you happen to be strolling.

Honestly, the best way to approach the Kenwood tower, which is just north of the intersection of Douglas Avenue and the Kenwood Parkway, is from the south, specifically from Lake of the Isles downhill. Kenwood was platted for residential use in the late 1880s, and the tower, built in 1910, provided water pressure when the growing neighborhood would’ve otherwise needed its water pumped uphill. In the 1970s, long after the tower’s service ended in 1954, there was a plan — later defeated — to convert it into what would have been the creepiest condos in the city.

These days, private residences hem the tower in. Behind it there’s an unassuming, yet steep drop into trees and undergrowth. Still, I love the Kenwood tower for being such a Gothic underdog. Though designated a Minneapolis city landmark, it’s not on the National Register of Historic Places, unlike the Prospect Park, Washburn Park and Highland Park towers. Where the others are white, slate-gray, and yellow, respectively, Kenwood goes full-on formidable in red brick. Finally, the tower is just a short distance from the “Mary Tyler Moore House” at the intersection of Kenwood Parkway and 21st Street. Imagine some unaired episode of the “Mary Tyler Moore Show” that concludes with a fall from the top of the water tower, à la Hitchcock’s “Vertigo,” and you’ve got the right feeling. 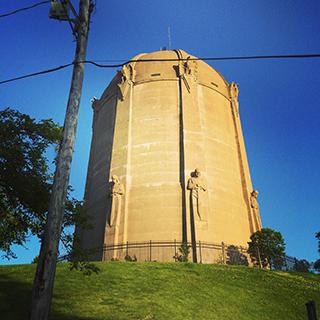 While the Kenwood tower is hemmed in, the Washburn Park Water Tower just east of the Harriet and Prospect Avenue intersection in Tangletown, perches all by itself on a little hill. Built in 1931-32, it’s still in use from May to October. Andy Sturdevant perfectly captured the charms of the Washburn tower in a previous Stroll column: It’s the neighborhood setting that makes it so striking. Tangletown streets have almost none of Minneapolis’ right-angle grid design. So, rambling north of Minnehaha Creek, you come upon the tower suddenly, perplexed by what appears to be a concrete planetarium. The wide steps leading up to the tower from the northwest are ideal for your approach, and there’s something ceremonial about gazing up at the tower as you ascend. The sword-wielding figures sculpted on its sides represent guardians of public health, after all. And the tower disappears, too. Go a few blocks, and then turn around to look back. You really can’t see it anymore. 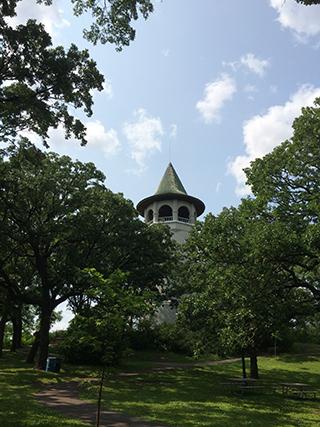 The Prospect Park Water Tower, which was built in 1913-14 and whose pointed green roof is visible from the eastbound lanes of I-94, is less well hidden. Known as the Witch’s Hat Tower, it rears up from the highest natural point in Minneapolis, the Tower Hill Park southeast of the University of Minnesota campus. During spring and summer, I suggest an approach from the southeast corner of the surrounding park where Clarence Avenue intersects with Seymour. In the right light, the Witch’s Hat — viewed through occluding tree branches — suggests all the cheeky concealment implied by its witchy roof. A caretaker for the tower in its earliest days was known as the “wizard,” and the story goes that the band initially slated to play at the top (it was conceived of as an aerial bandstand) was too exhausted by the climb to perform. Another version of the story simply claims they had trouble getting their instruments up the narrow, spiraling staircase.

At 127 feet, the Highland Park Water Tower in St. Paul is the tallest in the Twin Cities. It also remains in use year-round, and where the other towers are tucked among trees in neighborhoods that effectively hide them, the Highland Park Tower stands prominently at the intersection of Snelling Avenue and the Ford Parkway. Walk in from the west and stand at the bottom of the stairs on the tower’s north side. Mind the NO TRESPASSING signs behind the tower and admire the lion’s heads carved neatly along the cornice. 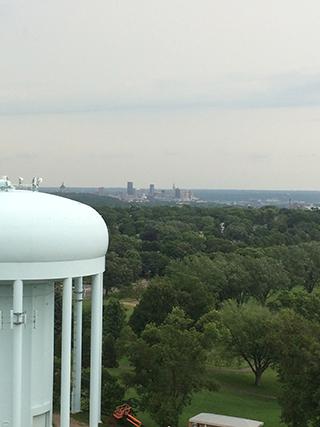 Erected in 1927-28, the Highland tower was designed by Clarence “Cap” Wigington, the first licensed African-American architect in Minnesota and the first African-American municipal architect in the country. He designed several St. Paul landmarks (the Harriet Island Pavilion, for one), and the Highland tower was part of the “City Beautiful” movement. Nice buildings were thought to encourage good citizenship.

The greatest pleasure of the Highland Park Water Tower, however, is its observation deck. Late in preparing this column, I realized it would be open to the public this past weekend. (The Witch’s Hat was open a few weeks ago for its centennial, but I couldn’t make it). In tall buildings around town, you usually gaze around or past other tall buildings. In the Highland tower, you gaze out across our two cities and marvel anew at the flatness.

Though the sights are labeled in the arching windows with indications of their distance from the tower (the airport or downtown St. Paul, for instance), I ended up looking past everything to the circle of our horizon. I would have liked to pick out the Minneapolis water towers, but since each of them is only 110 feet tall, they weren’t there. They’re for walking to, I think, not just looking at. Then I turned to the glass enclosure that surrounds the tower’s winding staircase and found a series of penciled signatures dating from the ’30s and ’40s scrawled on a greenish panel. I don’t know why I loved these so much. Except I suppose it was like Twin Cities history on a miniature scale. There’s something poignant about seeing that kind of distance up close, and it’s almost everywhere you look.

MH Rowe is a writer and teacher. He has written for Utne Reader, The Awl, Rain Taxi, McSweeney’s Internet Tendency, and his fiction has appeared in Black Warrior Review (forthcoming), as well as Spork, DIAGRAM, and other places. He is a PhD candidate in English at the University of Minnesota, and you can find him online at annotations.tumblr.com.

Andy Sturdevant will return to The Stroll next week.

There and then not: the historic water towers of Minneapolis and St. Paul