Like any of you who have experienced it, I first encountered Jim’s Apple Farm and Minnesota’s Largest Candy Store in Jordan, Minnesota, the old-fashioned way: I was driving to Mankato a few summers ago and passed a huge, hangar-like yellow building on the side of 169 with a signs that proclaimed “MINNESOTA’S LARGEST CANDY STORE / WORLD’S LARGEST SODA SELECTION / 155 KINDS OF ROOTBEER.” There were at least six words in that signage I really liked, so I figured I’d better stop in and have a look. 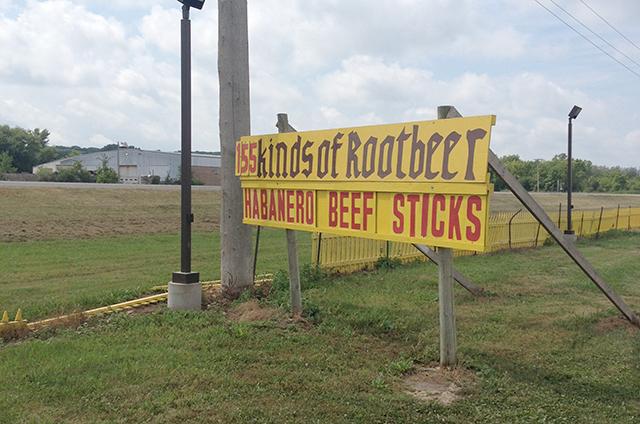 I left with a trunk full of regional pop and a vague idea that I ought to return whenever I needed more regional pop. After my first visit, a friend was over at my apartment and looked in my refrigerator for a beer, only to be confronted by a wall of bottles of Mr. Kola, Ale-8-One and Dang Butterscotch Root Beer. “Ah,” he deadpanned. “The big yellow candy store in Jordan, right?”

It’s not really much of a secret. There’s plenty of information about Jim’s Apple Farm on the Internet. There’s a Yelp page with some information, and a few postings on the other usual forums where ordinary people slander local businesses and each other. You can find the address, a sense for the business hours, and photos.

Jim’s Apple Farm isn’t responsible for any of this content, though. There’s no website or official Facebook page. While this is unusual, perhaps, it’s not totally unheard of. However, Jim’s one-ups anyone else out there with regard to technological refusalism: They don’t have a phone number, either. I can’t think of more than two other businesses in the entire state with no phone number. 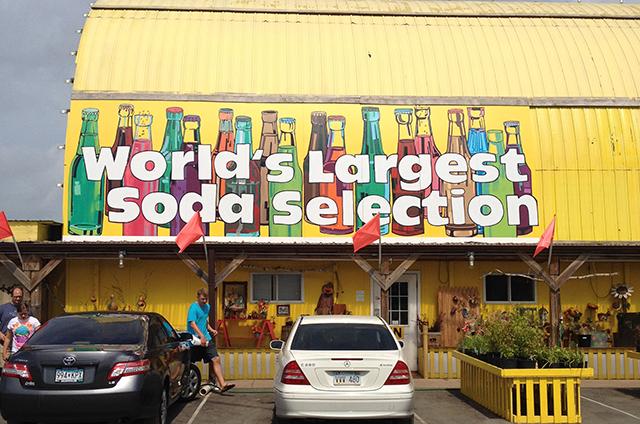 But they don’t need a website or phone number. Some things sell themselves, and it turns out a yellow airplane hangar filled with candy and regional soda pops is one of those things. On weekends during its open season from July to September, it’s absolutely packed with people. I presume a lot of people are from the Twin Cities, about 40 minutes away, but it’s clear, based on a couple of errant conversations I overhear, that a large number of patrons are from all over the southern part of the state.

I’ve been a number of times, during morning and afternoons on weekends, and I’ve never seen it less than nearly full capacity. There’s a Wonka-like anarchic quality in the aisles, which are filled – as you might imagine – with kids. “Kevin, this is not a free-for-all,” one mom chided her son last weekend, but the point seemed arguable. It is sort of a free-for-all. 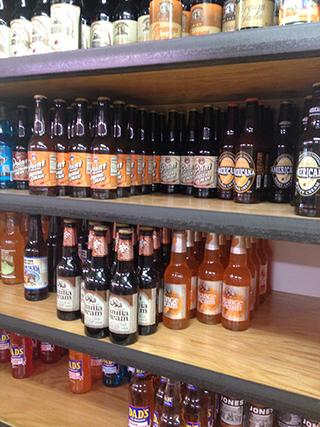 It’s not just the regional soda pops – though that’s my own personal focus – but international and regional candies, jerky, jams, bacon, pies and thousands and thousands of jigsaw puzzles. And, of course, apples – the Wagner family, who owns the store, were apple farmers before getting into the candy business.

The scene, while energetic, is not disorderly. Robert Wagner, in red suspenders and blue work shirt, walks through the aisles with an earpiece and headset, restocking shelves as quickly as they are depleted, talking remotely to unseen employees behind the scenes. It’s a slick operation: The marketing may be old-school, but it’s impressive to walk up to Robert, ask for a certain brand of pop, and watch him talk to someone in the warehouse remotely and get a real-time update on the stock situation. Having worked for a number of independent shopkeepers in my professional life, I recognize this sort of self-contained inventory maintenance well. 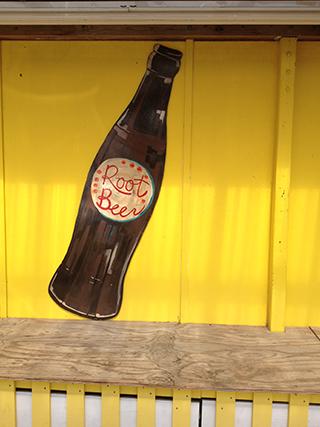 The signage is marvelous. A roadside attraction lives or dies by its signage, and the paintings and hand-lettering are all over the barn and near the extended gravel parking lot is some of the best of this type of signage you’ll see on the highway. they were all created by Jordan-based painter Jessica Barnd, who’s been working with Jim’s since 2009. Not just the aforementioned sign hawking the 155 types of rootbeer, made out in a lovely and appropriately Teutonic Fraktur style, but similarly witty and (possibly) hyperbolic claims regarding jerky, bacon, puzzles, fudge, pies, and probably a few others I missed. Closer in, you’ve got scenes of farms and orchards and apiaries, all portrayed in a Grandma Moses style and interspersed with human-sized images of soda pop bottles. Of course, it’s all surrounded and framed by marigold yellow picket fences, the same color as the building itself. As I learned my first time driving by, all of this visual hullabaloo is very difficult to ignore.

U.S. Hwy. 169 was extended north through Minnesota in the 1930s, and the portion between Mankato and the Twin Cities was upgraded to freeway status in the 1960s. This is, of course, what has made Jim’s Apple Farm’s business model viable. It bypassed Jordan proper, but the downtown area is located not far from Jim’s. On a Sunday afternoon, it’s very empty except for a few open antique shops and some errant local teenagers lurking around. It’s worth a walk down 2nd Street or Water Street if you’re not in a hurry to get home and start drinking your soda pop. There’s a lot of attractive 19th  century infrastructure intact, despite what appears to be a very low rate of occupancy. If you have a dream of rehabbing a 19th-century mercantile within a two-minute drive from an apple farm and cavernous yellow candy store, Jordan looks like a good option for you. 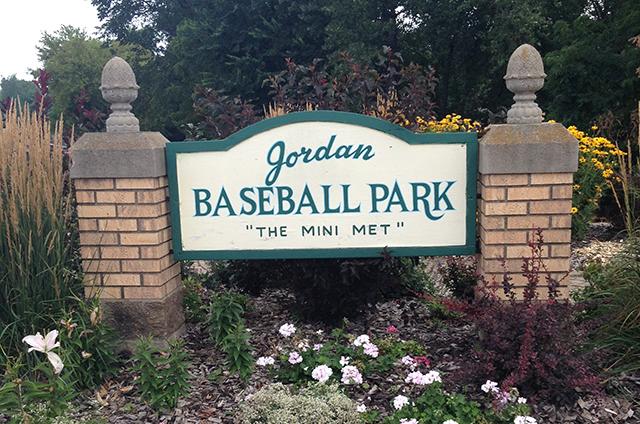 There was some action on the south side of downtown, though. Last Sunday, most people in the area were gravitating toward Jordan ballpark for the Class C Minnesota State Amateur Baseball Tournament. At noon, the Luverne Redbirds were playing the Delano Athletics at the Mini-Met. It’s a really gorgeous ballpark, built from the grandstands of the old Scott County Fairgrounds and looking sharp after a recent renovation. Apparently, a visiting sportswriter came to the old ballpark in the 1960s and compared it favorably to the Twins’ home in Bloomington, Metropolitan Stadium. There’s something sweet about the fact that the name has stuck, two Twins stadia later. 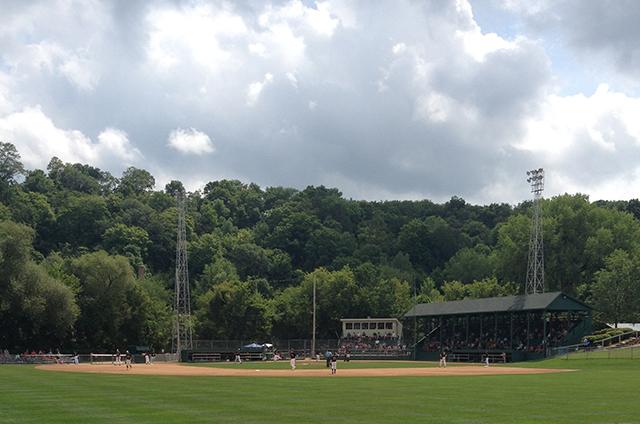 The big green stadium, framed by a lake and a church steeple, nearly matches the big yellow barn for rural vernacular splendor. They do sell Coke products at the Mini-Met, but I smell a potential soda pop marketing opportunity here for them and the Apple Farm: regional root beers and cream sodas for all Jordan Brewers home games. Alas, like their big yellow peer, the Mini-Met doesn’t have a phone number listed on their website. I guess I’ll just have to mention my idea to someone in person next time.

Note: This piece has been updated with information about Jordan painter Jessica Barnd, who’s responsible for the wonderful signage.