The general consensus for getting from St. Paul to Minneapolis has been to cut a westbound path across the flat, middle portion of the city west of downtown, then follow the Mississippi River on the north side once it turns diagonally around Marshall. This route has connected the steamboat landings in downtown St. Paul to the St. Anthony Falls in Minneapolis for over 150 years. This is roughly the path I-94 takes, and it’s where University Avenue went decades before that. Before even those, Territorial Road followed the same trajectory. Commuting from Pig Eye Parrant’s tavern to Ard Godfrey’s house in the 1850s down Territorial Road would have essentially followed the same path as the Green Line.

So while most of the original road is gone, the route is still the spine of the Twin Cities. Most of the physical markers of Territorial Road have disappeared, except in two spots: the mostly trucking-oriented route that runs from Vandalia to Westgate between cold storage warehouses and industrial supply houses, and one alley in the Hamline Midway neighborhood. 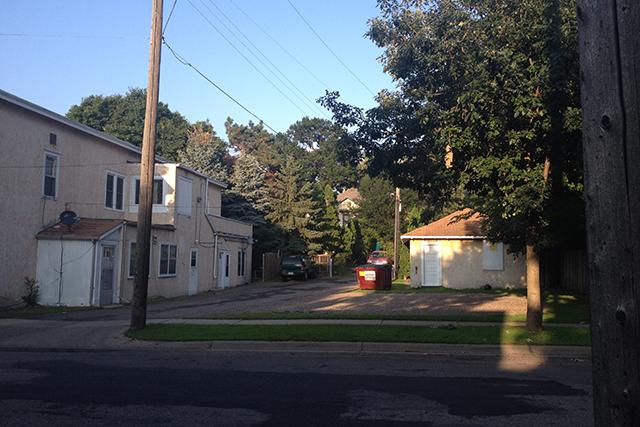 MinnPost photo by Andy Sturdevant
This alley in St. Paul is a vestige of Territorial Road, the original Twin Cities link.

Of course, the stretch of Territorial Road between the two cities was part of a longer route begun in 1850 between two far-flung U.S. Army forts in the Minnesota Territory (“all above St. Anthony was then a wilderness” writes one contemporary account). It appears as “Military Road” on some older maps. Like Eisenhower’s system of “defense highways” a century later, this territorial road was designed and funded by and for the United States military, “with all necessary connections through and around cities, designed to meet the requirements of the national defense in time of war and the needs of a growing peacetime traffic of longer range.”

Among the team surveying the road for the federal government was one F.A. Renz, a German-born farmer who, after his career in surveying ended, became the first candymaker in the state. After that, he left for Kansas and then Europe to do some investing, and finally returned to St. Paul to buy a distillery, which then burned down with all of his money inside it (figuratively and literally). There’s no résumé like a 19th-century résumé.

I can’t find any photos of the old Territorial Road – its heyday is the very earliest days of photography – but you can imagine what it must have looked like. Probably a lot like how many roadways in the mid-nineteenth century looked: dusty in hot weather, muddy in wet weather, streaked with manure from horses pulling wagons, with some garbage, animal carcasses and deep channel-like ruts from the wagons along the way. Traveling overland, even on a modern government-funded trailway, was a tough business. Mostly it would have been used by fur traders, heading off to the Red River and then returning to the population center of St. Paul — about a hundred a month by 1851.

The Hamline Midway History Corps has some great maps on its website, tracing the development of the neighborhood from the 1860s through the 1950s. The star of the show, early on, is Territorial Avenue. Over time, you can see it slowly surrounded, overpowered and then absorbed into the urban grid growing up around it. University Avenue doesn’t come along until the 1870s, and wasn’t paved until the 1890s, becoming the major east-west thoroughfare connecting the two cities (or at least Hamline University and the University of Minnesota, hence its name).

By 1905, the area east of Snelling has completely been given over to the grid. There’s still a vestigial Territorial Road to the west, surrounded by lots and diagonal streets with names like Capitol, Havana and Cottenwood [sic] that will also be absorbed into a more orderly grid. A map from around 1907 shows the road contracting from Snelling Avenue up to Fairview, marked “vacated” along the way. By the 1910s, it was all platted, subdivided and vacated in this area – except for one block.

Looking at the 1907 map, you can see where that block is. It’s the one bounded to the north by Van Buren Avenue, to the south by Blair Avenue, to the west by Wheeler Street, and to the east by Aldine Street. It’s the one block in the area where the route hews close enough through the middle that the developers must have thought, “Well, that’s basically where we’d put an alley. Let’s just keep it.” And so they did. It’s now a pretty typical St. Paul alleyway, lined with detached garages and wood-frame sheds, where people take their trash out, park their cars, and where their kids play ball games. 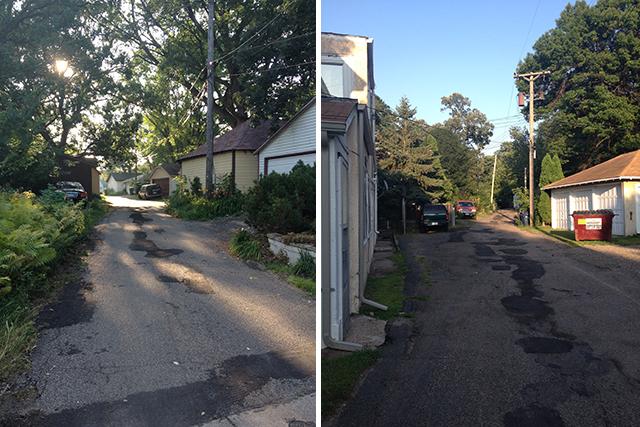 Pretty typical, but not completely typical. The alley isn’t a straight line, cutting a diagonal through the back lots. It’s a lazy, loping country road-style path. You can’t actually see one end of the alley from the other, as the turn within that one block is just sharp enough to be blocked out by trees. There is nothing particularly spectacular back there, other than the experience of walking the route of a 19th-century fur trapper at more or less the same speed and in the same direction. When I got the inevitable “what are you doing back here” look from a woman watering her garden (a fair question, after all), I told her why I was here and asked if there was a historical plaque commemorating the spot as the one of the city’s oldest thoroughfares. Her demeanor changed, and she cheerfully told me there wasn’t, but maybe there should be. The story of the alley seems to be fairly well-known to the people who live along it.

Longtime readers know that two of my favorites experiences of walking through these cities are 1) alleys and 2) streets that disrupt the grid. Territorial Alley in Hamline Midway gives you a chance to experience both.

You can’t really walk a path connecting the alley with the still-named Territorial Road to the west without cutting through train yards, jumping barbed wire fences, and dodging 18-wheelers. The old Amtrak station is squarely in the middle of the path, as are a number of sprawling warehouses. That part of Territorial Road has its own features to recommend for some other time. But it feels a long way off from the little back alley vestige that remains to the east, cut off by a hundred years of urbanization and industrialization.

Territorial Alley: a vestige of the spine that linked the Twin Cities