One of the marvels of life in the early 21st century is the ease of looking at historical materials that, even 10 years ago, would have required a trip to an archive. Visiting archives and looking at historical photos is already not terribly difficult – one can do so at the Minneapolis Central Library in either the picture files or in the Minneapolis Collection, or in the photography department offices at the Minneapolis Institute of Arts, or in any number of places at the Minnesota Historical Society or the Hennepin History Museum or University of Minnesota. For years, the Star Tribune had picture files available, as well.

These are some of my favorite places in the Twin Cities to spend a free afternoon, whether looking for some specific piece of information, or just poking around, the graphic equivalent of wandering through an unfamiliar neighborhood to see what’s there. When I first moved to the Twin Cities, spending my underemployment idly thumbing through historic archives at the Hennepin History Museum and MNHS helped me put some background to the cities I was just getting to know.

A project like Yale Photogrammar, however, reminds you just how much more is out there, and how easy it is to find. Photogrammar is an online database of the thousands and thousands of photographs taken by the United States Farm Security Administration and Office of War Information photographers during the Depression and World War II. All the photos are tagged and organized by year, location, photographer and subject. To see these photos in a not-so-distant past would have required a visit to Washington, D.C., and the Library of Congress.

Organizing historic photographs online can be tricky, of course. There’s a million crappy “historic” photo blogs that fling black-and-white photos out into the torrent of social media with no context, attribution or background. That’s why a project like Photogrammar is important, in that it shows the photos, but also the context.

Photogrammar’s best feature is an interactive map that shows, county-by-county, where the photos were taken. Of course, if you’re like me, the first thing you’ll want to do is zero in on Hennepin and Ramsey counties. Here, one comes across hundreds of photos by several FSA photographers. The majority of them were taken by a photographer named John Vachon. 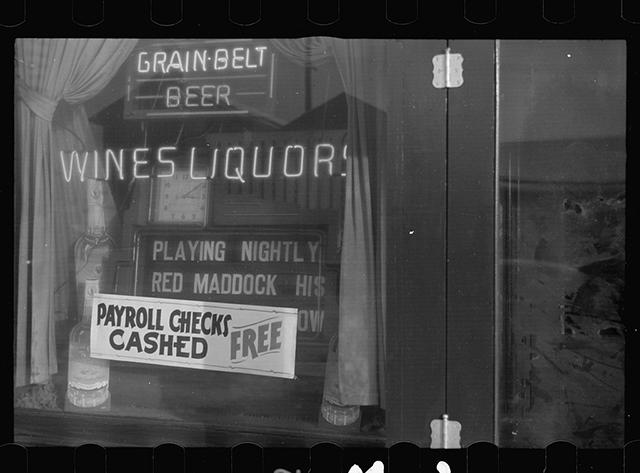 Photo by John Vachon
What’s striking is Vachon’s eye for the details of signage and architecture around the city.

Vachon was a Minnesota native, a young man from St. Paul who turned a low-level summer bureaucratic job into a respected, fruitful life-long career. After graduating from the University of St. Thomas in St. Paul in 1934, he moved to Washington, D.C., with his family to attend The Catholic University of America. While looking for summer employment, he took a position with the Farm Security Administration, filing, captioning and organizing photos in its D.C. office – first on a temporary basis, then as a permanent worker. The FSA employed dozens of photographers to travel around the United States and document both the Depression and the New Deal programs, creating some of the most iconic images of the era and launching the careers of many of the best-known American photographers of the 20th century. Vachon was in charge of maintaining “The File,” as it was known.

One of the FSA photographers he befriended was another Minnesotan in Washington, D.C., working with this office: Gordon Parks. In his memoir “Choice of Weapons,” Parks writes about Vachon: “John didn’t talk much, and you got the feeling he censored each thought before letting it go. But under his calm lay a dry, biting sense of humor. He was lean and long-jawed and, when his sandy hair was uncut, he looked like a Texas cattle wrangler.”

Not a photographer by background, spending so much time with the work of other photographers inspired Vachon to get involved himself. In 1937, he asked his boss if he could borrow a camera and take some photos around Washington, D.C. His work was good enough to get him a position as an FSA photographer. He said later in an interview: “My deepest and strongest and fondest memories of working there for five years I guess, six, something like that, are all connected with traveling around this country, seeing places that I’d never been before. I had traveled very little until that time, I’d only been from my native Minnesota to non-native Washington, and it was just great to be alone in a car and to be paid for driving around and taking pictures of what you liked to take pictures of.”

I like the story of Vachon’s background as a photographer, because it in some ways reflects the ideas of what something like Photogrammar makes possible today – that access to archival photography and materials can be inspiring and even transformative. “Being with it all the time, I sort of fell in love with it,” he later recalled about The File.

Vachon’s photos of Minneapolis and St. Paul are mostly around industry, taken around the fall of 1939, 75 years ago this month. He started photographing late enough to miss the depth of the Depression, so a lot of the photos from this leg of his cross-country trips capture the cities in the interstitial period between the worst of the Depression and the beginning of World War II. His photos depict the industrial landscape that still looks familiar — the grain elevators still dominate the urban landscape around the old milling districts along the Mississippi riverfront and near the University of Minnesota. Of course, the thing missing from these scenes today are the workers that activated those industries — loaders, butter testers, truck drivers, grain futures buyers, street preachers. He captures them not only engaged in their jobs, but also on breaks for lunch. 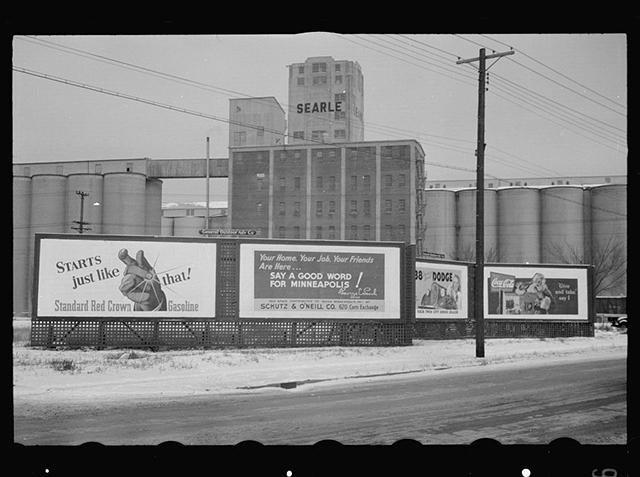 Photo by John Vachon
Vachon’s photos of Minneapolis and St. Paul are mostly around industry.

The interest in people is present – one senses Vachon’s quiet nature – but what’s striking is Vachon’s eye for the details of signage and architecture around the city. His instinct for capturing images on billboards and vernacular signage in particular are unerring. The idea of a quiet young man from St. Paul developing an eye for photography after a temp job looking at the work of others is maybe what helped develop that eye.

Ideally, there are young people looking at some of the photos that come across their social media transom today, whether through a project like Photogrammar, or another venue, like Historyapolis or the Hennepin County Library Tumblr or the great local photo and visual culture aggregator Stuff About Minneapolis.

In that same interview I mentioned above, Vachon recalls his exact thoughts when looking through the photographs in The File, including one that’s familiar to anyone who’s spent time with the photography of others: “I just sort of wondered, ‘Could I do this?’ ”

The title of Gordon Parks’ autobigraphy was incorrectly named in an earlier version of this piece. It’s been corrected.