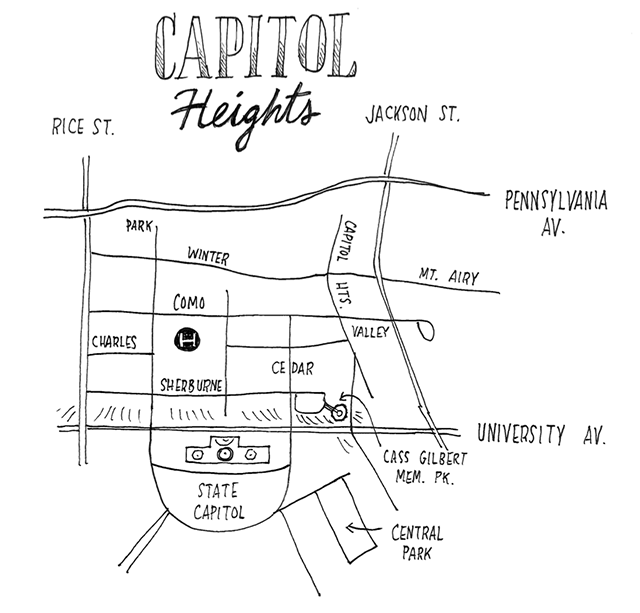 MinnPost illustration by Andy Sturdevant
The Capitol Heights neighborhood is pretty effectively hemmed in by geography and infrastructure.

When St. Paul’s district council planning process was completed in the mid-1970s and the names of the 15 official neighborhoods were formalized, a few of the older, vernacular neighborhood names inevitably fell through the cracks. One such neighborhood retains its older name through a street that runs for a few blocks between Cedar and Jackson north of University Avenue in Frogtown: Capitol Heights.

The Capitol Heights neighborhood is pretty effectively hemmed in by geography and infrastructure. Its northern boundary is Pennsylvania Avenue, a roaring two-lane quasi-highway that cuts the neighborhood’s streets off from the North End. To the south is a hillside that creates the heights in question. Rice is to the west, and Robert is to the east. In between them is Capitol Heights, a neighborhood of modest houses and commercial buildings with a hospital in the middle of it. The streets that run through the neighborhood – Charles, Sherburne, Park, Capitol Boulevard and the aforementioned Capitol Heights – all run just a few blocks, giving the area a somewhat isolated feeling. 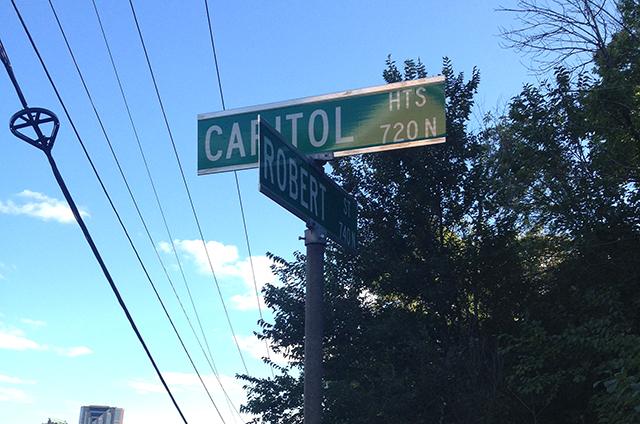 MinnPost photo by Andy Sturdevant
One of the few street suffixes in the Twin Cities that’s not avenue, road, boulevard, parkway, drive or the like.

Capitol Heights was, at one time, a very prosperous residential district, filled with mansions built by the city’s early political and commercial elite – Larry Millett devotes a chapter to the area in his recent study of the vanished mansions of the Twin Cities, Once There Were Castles. Most of these sat on a ridge known as Sherburne Hill, renamed Merriam’s Overlook after the governor whose mansion was the most prominent in the area. As the grounds of the Minnesota Capitol grew, the area’s mansions were eventually repurposed and demolished, all of them gone by the early 1960s. The hill remains, though, and from Cedar Street, or cutting through a state employees’ parking lot, you can reach Cass Gilbert Memorial Park and a Brutalist concrete overlook that juts out from Merriam’s Overlook.

Funny that Cass Gilbert, the Beaux Arts-minded architect of the Capitol building, should be commemorated in such a way, as the octagonal overlook in the park that bears his name wouldn’t seem out of place in East Berlin. Its grim efficiency is kind of charming, though, and it’s a great view of the city, including one of the rare vantage points from which you can see the city’s two great domes of influence – the State Capitol and the Cathedral of St. Paul – aligned like the twin suns of Tatooine. 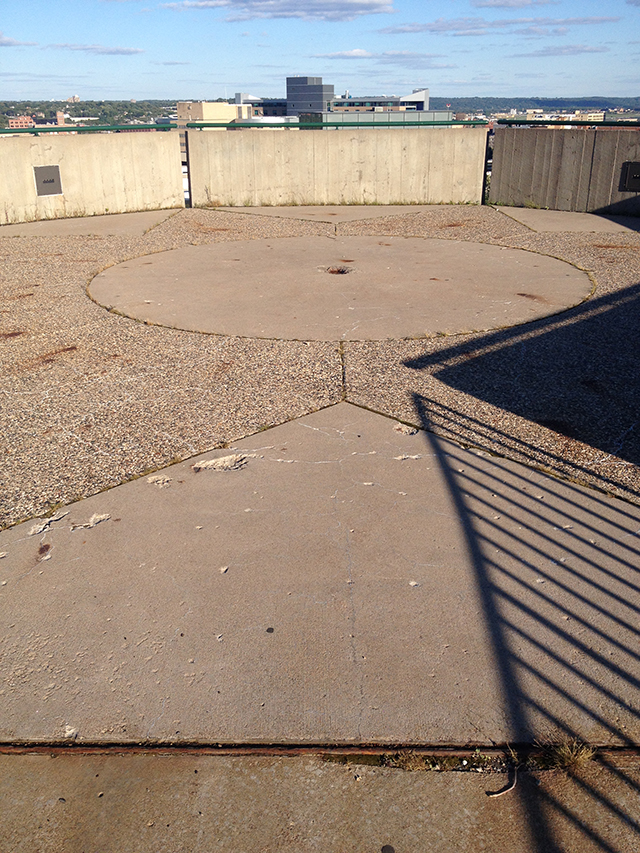 MinnPost photo by Andy Sturdevant
The octagonal overlook wouldn’t seem out of place in East Berlin.

The houses in Capitol Heights are a hoot, the kinds of great dwellings you see in neighborhoods tucked away from public scrutiny. There are some bright colors – yellows, mustards, ceruleans – and idiosyncratic architectural flourishes all over. There’s a cedar combination carport and second-story deck on one lot, and a house with a fleur-de-lis woodcut-pattern apron under the porch on another. Nearby there’s also some sort of octagonal barbecue shed constructed in a style I guess you’d call Primitive Moderne. It’s behind an 8-foot fence, so I couldn’t get a good look, but it’s the first time in a while I’ve encountered two octagonal structures on the same walk. Near Valley Street, there’s a marvelous, 21st century pre-fab with an underground garage built into the side of a hill, shimmering metallic in the afternoon sun. Its backyard is a wild forest overlooking Jackson Street. 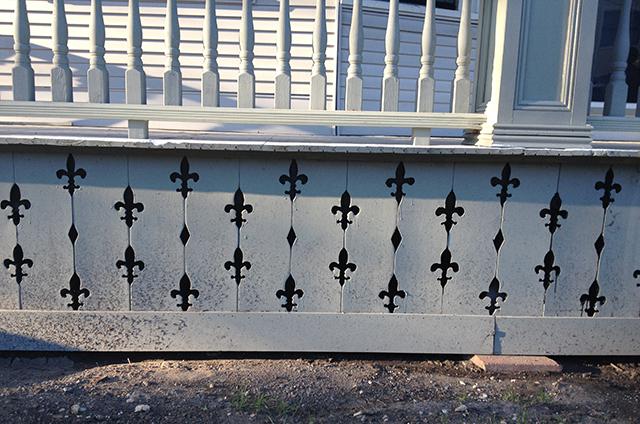 MinnPost photo by Andy Sturdevant
One house has a fleur-de-lis woodcut-pattern apron under the porch. 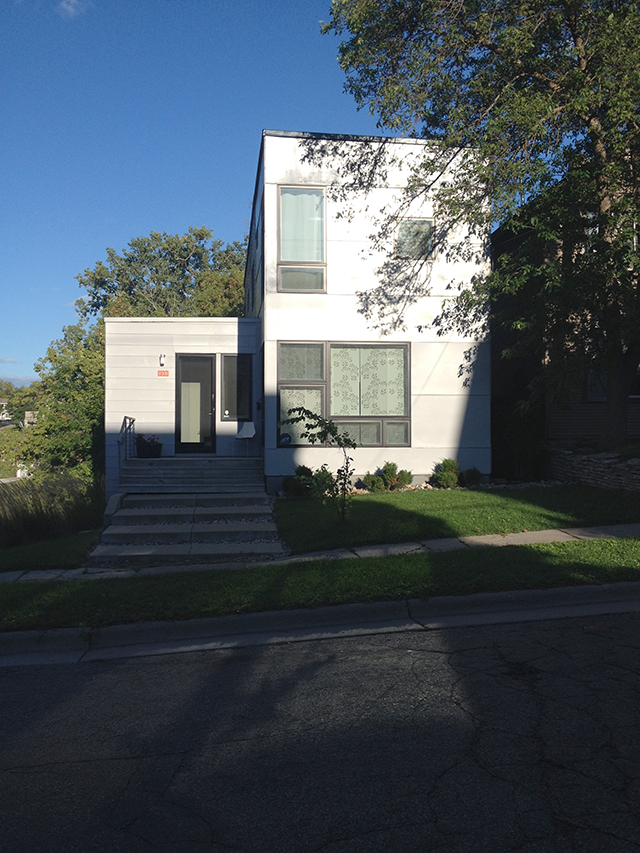 The Mount Airy Homes, a ’90s-era public housing project, are on Jackson near Valley Street down a hill from Capitol Heights. There are also two interesting historical markers, presented in such a way that makes you think the original context is long-gone. The first is a marker for the O’Brien Memorial Playground, named in memory of little Harlow O’Brien, a young St. Paulite who died in 1949 at the age of 8. The area is known today as the Valley Playground, though there’s not much in the way of recreational equipment. A 1952 Pioneer Press item places the playground at L’Orient and Glencoe Streets. L’Orient is a few blocks to the east, and Glencoe Street, which ran east-to-west, is gone – my guess is that it didn’t survive either 35E, which runs alongside L’Orient, or the city’s demolition of the area later in the 1950s. 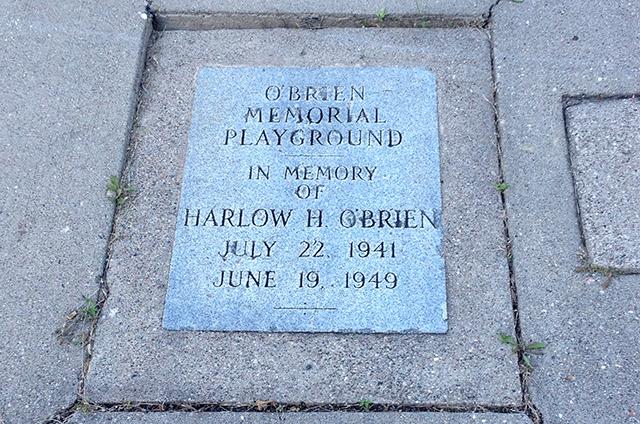 MinnPost photo by Andy Sturdevant
O’Brien Memorial Playground was named in memory of Harlow O’Brien, a young St. Paulite who died in 1949 at the age of 8.

Right next to this marker is another, commemorating the World War II veterans from “the Valley” – Joyce, Duffy, Diaz, Robinson, Grodin, Lyman and Satak. Besides being called Mt. Airy and the Valley, this neighborhood was also known as the Badlands at that time, a rough-and-tumble slum cleared out to make way for public housing after World War II. Perhaps local mourners of poor Harlow moved the plaque to this site when the original playground disappeared. 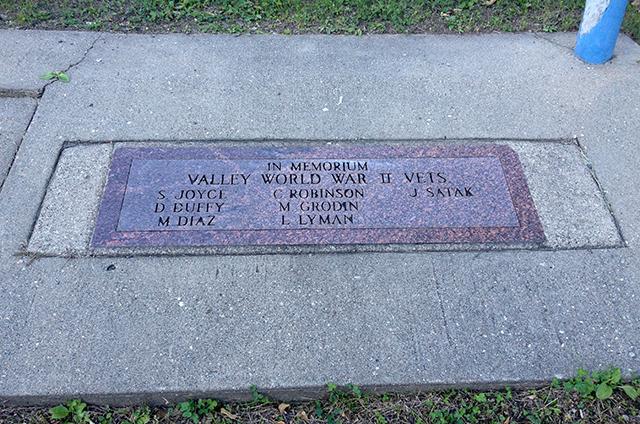 MinnPost photo by Andy Sturdevant
A marker commemorating the World War II veterans from “the Valley.”

Bethesda Hospital anchors the neighborhood, and it’s housed in a fine, historical building, once serving the neighborhood as a primary care clinic, and now active as long-term acute care center (to avoid confusion from its neighbors, a sign by the front entrance cautions would-be patients that there are no emergency facilities on-site, and that they should call 911). Walking south through Capitol Heights, across the tidy Bethesda grounds back toward the Capitol and down Merriam’s Overlook, one traverses a mass of concrete bureaucratic infrastructure – various government buildings dating from the 1960s and the parking lots and garages that serve their inhabitants. At the heart of this is one of the great anti-monuments in the Twin Cities.

On a whitewashed concrete pillar on the second level of the parking garage to the southeast of the Capitol, next to a trash can and ashtray, you’ll find one of the saddest, most woebegone historical markers in the Midwest: a black and bronze plaque that reads, in a distinguished serif hand, “CENTRAL PARK.” The evening I visited it, a puddle of dirty water was pooled around the base, emphasizing the total abjectness of the scene.

It seems like a joke or stupid pun placed there by an urban interventionist, but it’s not. Or at least it’s not a joke in that sense. There is, at the top of the garage, an almost-pleasant expanse of green grass, with a sort of triangular concrete amphitheater wedged in the front. 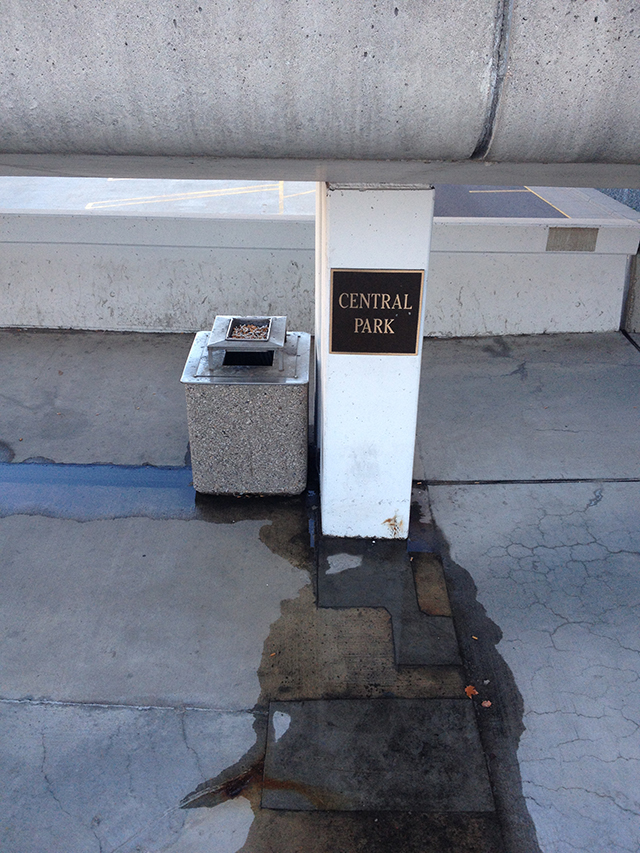 MinnPost photo by Andy Sturdevant
It seems like a joke or stupid pun placed there by an urban interventionist, but it’s not.

This green patch is the Central Park in question, but there was on this site at one time an actual Central Park. You can read about the full story of St. Paul’s Central Park in Paul Nelson’s great MNopedia entry, posted just this past summer on MinnPost. An area “with trees and shrubs, curving sidewalks, benches, and a fountain,” he writes. “It became an elegant space well fitted to an elegant neighborhood.”

It’d be a stretch even for me to call a parking ramp “elegant,” but you can stand on top of Central Park’s odd, grassy, top-floor descendent and look up Merriam’s Overlook at the octagonal concrete observation deck above you. None of it’s elegant, exactly, but both are nice places to reflect on the ever-evolving geographic and nomenclatural landscape of the Capitol City.