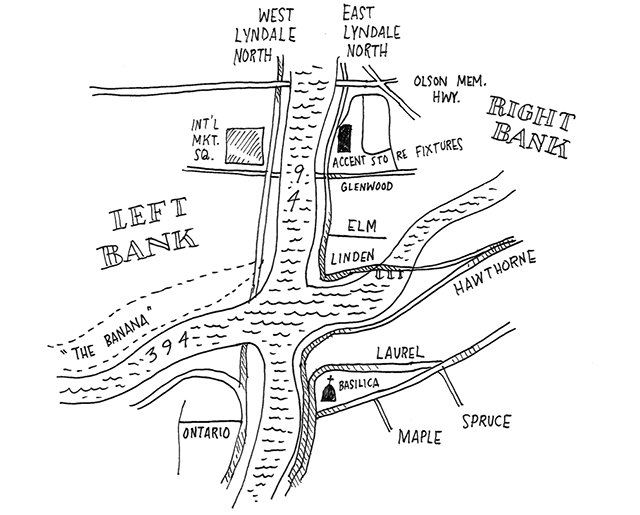 MinnPost illustration by Andy Sturdevant
Like two rivers converging, Interstates 94 and 394 separate these parts of the city physically and psychically.

The house I grew up in was located about a quarter of a mile from an interstate highway. At night, even when the neighborhood was at its quietest, you could still hear the whooshing of cars, despite being separated from our subdivision by a thicket of trees. The insistent white noise reminded me of a fast-running river, or rapids, or falls — a much more romantic notion than a suburban expressway.

Besides for the noise, there’s something about the way a limited-access highway cuts through the landscape that’s like a river. It shapes perceptions of what’s accessible and what’s not. The northern edge of the Sculpture Gardens at the Walker Art Center and the Minneapolis farmers market are separated by less than a mile’s walk, but the distance between the two seems much greater than something one would attempt to traverse on foot. Like two rivers converging, Interstates 94 and 394 separate these parts of the city physically and psychically, making the trip possible only by walking the edge of the freeway and crossing bridges at one of a few points.

Think about any piece of Minneapolis photo stock art you’ve ever seen. What do 70 percent of them share in common? A stream of red and yellow tail- and headlights, shot at a very low exposure, of the city’s freeways looking like a neon river flowing into the heart of the downtown. There are easily as many shots on a Google Image Search of “Minneapolis” depicting the interstate-as-river as there are shots of the actual river that flows through downtown.

So in the spirit of inquiry, I decided to see what I might find walking up and down the east and west coasts of I-94 where it’s most imposing: the elevated one-mile stretch between Dunwoody Boulevard and the Olson Memorial Highway. This is part of the section of I-94 that cleaves mighty Lyndale Avenue into two humble frontage roads (with the confounding designations “West Lyndale Avenue North” and “East Lyndale Avenue North”).

The first sight I came upon crossing the Irene Hixon Whitney Bridge between the Walker and Loring Park to get to Lyndale was — naturally — a photographer shooting a long exposure shot of the interstate flowing into downtown. A good omen.

If you’re looking to disappear from the public eye for a few hours, there are few better places to do it than the two Lyndale Avenues on either bank of 94. There are sidewalks for most of the way, especially on the western bank, but there are very few pedestrians making the trip. As far as the cars whizzing by you, forget it — I initially thought I might make some confusing eye contact (“what the hell is that guy doing there? Did his car break down?”), but there’s no time for even that. Most of them are going so fast on or off the ramps that they barely have time to register you. It’s probably pretty safe, but something about walking such narrow sidewalks in such close proximity to high-speed automotive traffic seems vaguely dangerous. I thought of the grim Leadbelly line: “Sometimes I have a great notion / To jump into the freeway and drown.”

The fact that 94 is elevated for most of this stretch, though, makes it very unlike a river in the fact that there’s a whole lot of space underneath for things to go. What kinds of things? Parking lots, primarily, but a few other noteworthy items, as well. 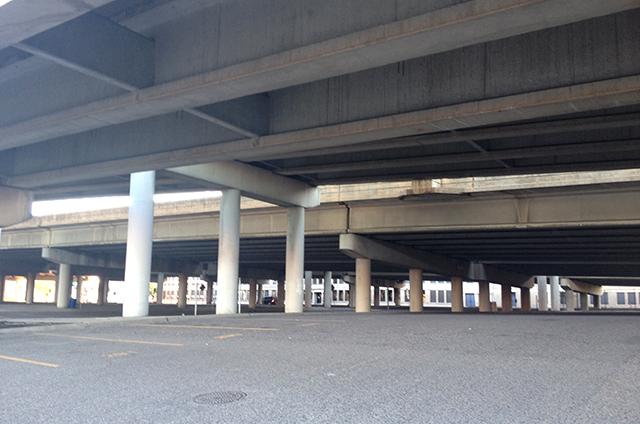 MinnPost photo by Andy Sturdevant
There’s a whole lot of space underneath the freeway for parking lots. 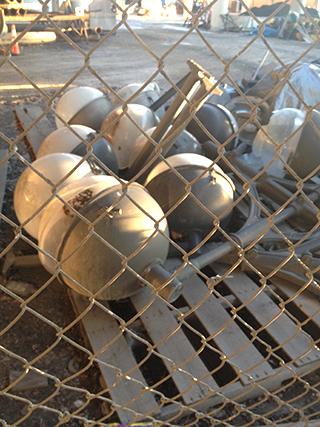 MinnPost photo by Andy Sturdevant
Remember those mod-ish round lights they used to have
on Nicollet Mall?

Near Glenwood Avenue, on the tip-top eastern edge of what’s sometimes known as “The Banana” but more formally as Linden Yards, there’s a pocket of City of Minneapolis-owned land submerged beneath 94 that contains an entire elephant’s graveyard worth of abandoned, broken or obsolete city infrastructure. It’s all behind chain link fences and barbed wire with plentiful notices about trespassing, but it’s still quite a sight even from the other side. A city inventory of Linden Yards from a few years ago gives an indication of the sort of things here in this sector: iron tree gates, manhole covers, enormous light pole bases, traffic lights, street signs, metal benches. Remember those mod-ish round lights they used to have on Nicollet Mall? They’re all here, too, assembled like the troops in Qin Shi Huang’s Terracotta Army, waiting for orders to illuminate downtown Minneapolis that will never come. To extend the central metaphorical conceit of this walk, this is exactly the sort of thing you might expect to find at the bottom of a river.

On either side of 94, you walk. This area was never some uniformly green and orderly section of neighborhoods, even before the interstates. Some of it was, especially south of Glenwood and near the Olson Highway, but this is also been the site of enormous train yards dating back to the 19th century that cut right through the neighborhoods.

Still, if you pay close attention to the street names you come across, you can get glimpses of the old neighborhoods and street grids beneath the interstate. Between Dunwoody College of Technology and 94, there’s a lonely few yards of street designated Ontario Avenue. Where did that come from? Don’t Minneapolis streets have orderly, logical names? Of course they do, so it makes more sense when you look at an old plat map, and see Kenwood Parkway used to be called “Superior Street,” and there was a section of Great Lakes-named east-west streets near the Parade Grounds, all now gone. 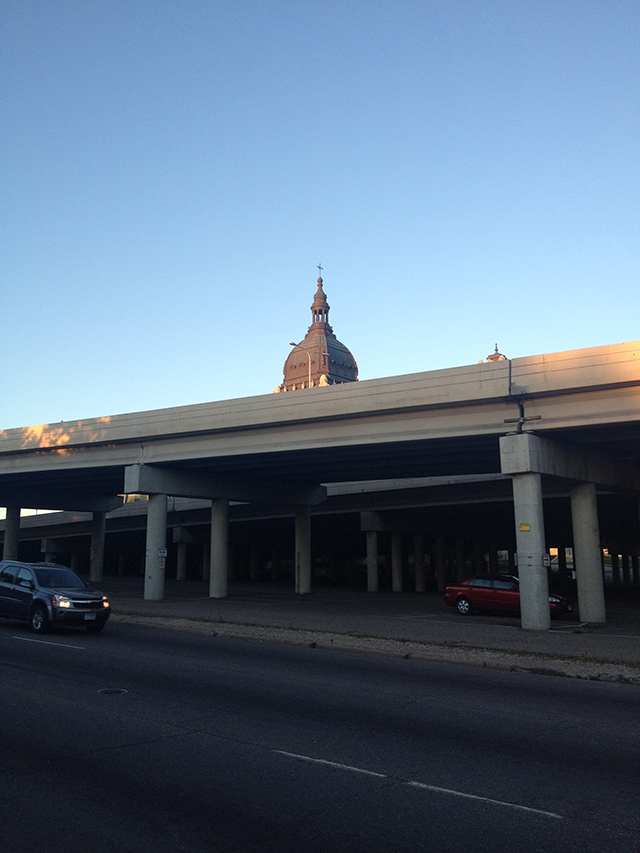 MinnPost photo by Andy Sturdevant
The planners who determined the route of the interstates in the 1950s and ’60s were probably not Catholic.

On the east side of 94, you’ll find two blocks of a Chestnut Street, which also seems right at home when you consider it originally ran alongside the still-extant and arboreal-themed Linden, Laurel and Hawthorne Avenues for a considerably longer distance. Also nearby was Willow (still there), Spruce (also still there, for a few blocks) and Maple (gone) in Loring Park. This sylvan cluster of roads is now, of course, separated by 394. It’s a neighborhood that connected North Minneapolis, downtown, Lowry Hill and Loring Park, four parts of the city that sometimes barely seem adjacent today. From this vantage point, you can appreciate how centrally located the Basilica must have seemed visually in the pre-Block Party era. (Not to mention the Minneapolis Farmers Market, near this site since the 1930s.) The Basilica still hovers above the banks of the interstates, although just barely peaking over the elevated ramps in places. A good clue that the engineers and planners who determined the route of the interstates in the 1950s and ’60s were probably not Catholic: 94 and 394 slice the Basilica’s parish cleanly in half.

Nearby there are a few other amusing clusters of street names. Lakeside Avenue, facing Lyndale and 94 south of the Olson Highway, did at one time run alongside a lake. Now, there are a few light industrial buildings dating to the 1960s. The best of these houses Accent Store Fixtures, a wonderland of retail shelving, mannequins, clothing racks and other such items, whose mundane DBA name belies the breadth of interesting and uncategorizable products found inside. Their website declares, convincingly so, that “our products are essential for … artists!” In this spirit, atop the front entrance is a heroic wire mannequin, her hand over heart like a muscular factory worker in a Soviet war memorial, lifting a white star over head. She’s a beacon of oddball local commerce for the drivers making their way westbound, a downstream cousin to I-94’s other great elevated mannequin, Mapco Minnie. 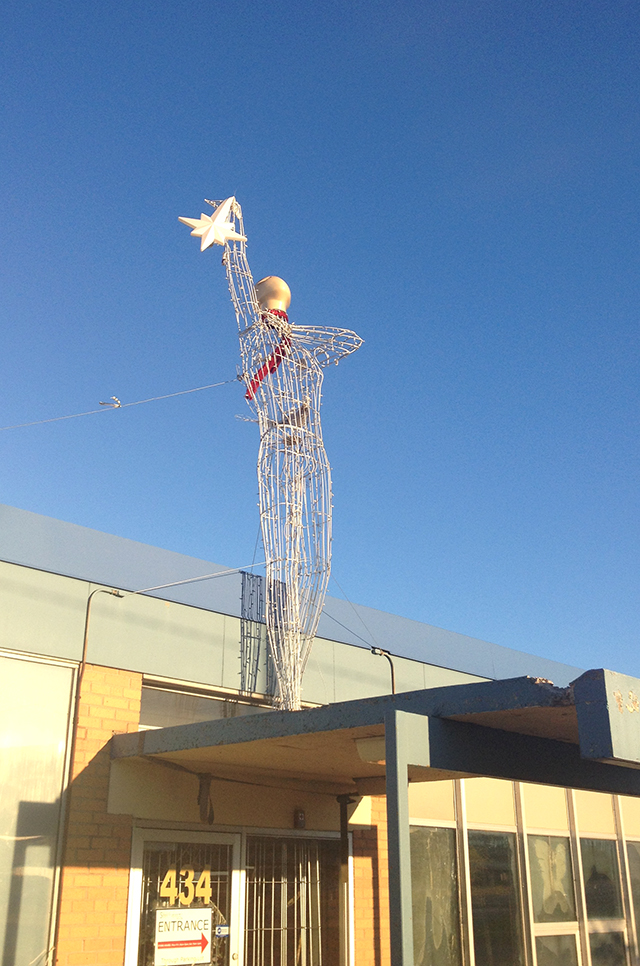 If you get off the sidewalks on the two Lyndales where you can, this walk mostly takes place beneath the mighty pylons that hold the interstate up. Viewed from below on foot, they seem so much bigger, and the spaces beneath them so much vaster – up to three or four city blocks wide and many more long. The scale is mind-boggling. For all the noise above, from below, these feats of civil engineering and the parking lots beneath them seem quiet and cavernous enough to be a cathedral, a sort of weird, high modernist Atlantis.