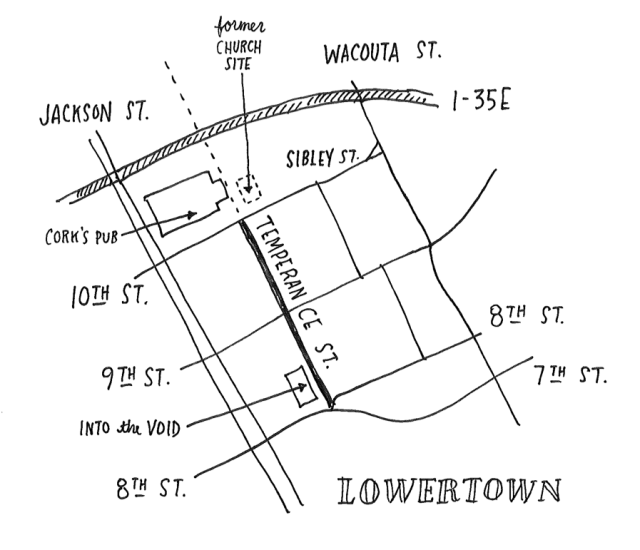 MinnPost illustration by Andy Sturdevant
An island of Puritan self-righteousness in the midst of Catholic St. Paul.

Speaking in the aftermath of the French Revolution in 1789, a Republican orator once proposed that the sections of the new Paris be named “after the virtues.” Future Parisian boulevards, he proposed, should bear names like “Sobriety Street,” “Humanity Street,” “Generosity Street” and “Temperance Street.” “The people may become familiarised with virtue,” he reasoned. “For having every moment the name of some virtue in their mouths, they will soon have morality in their hearts.”

Chuckle at his over-the-top optimism if you have to, but street names are often chosen to reflect values. Most of the time, historical figures are stand-ins for whatever values early city planners wanted to impart, but sometimes you’ll get a purely didactic street name. Such is the case with St. Paul’s North Temperance Street, a blink-and-you-miss-it two-block thoroughfare in Lowertown between Jackson and Sibley, running into 10th Street on one end and 8th Street on the other end. 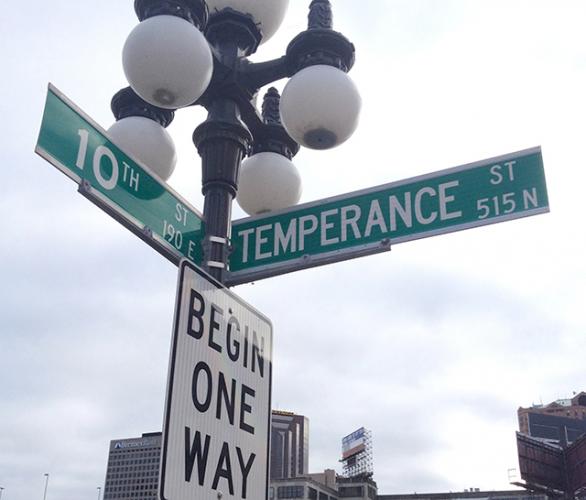 Even when it was laid out in 1851, Temperance Street wasn’t much longer – it only ran up to 13th Street, roughly where Regions Hospital is located today. The Embassy Suites parking lot and I-35E cut Temperance Street off before that now, but it always began at today’s 8th Street (which, of course, used to be 7th). The little extant stretch of Temperance you can walk today survived while other short nearby streets with similarly evocative names – Canada, Cooper, Spruce, Pearl – were absorbed or renamed by the end of the 19th century.

Temperance – “habitual moderation in regard to the indulgence of the natural appetites and passions,” as the 1913 edition of Webster’s so eloquently puts it – didn’t seem as fusty a concept in that century as it might today. The abolition of alcohol was a cause that crossed all sorts of ideological lines. Socialists, suffragists, abolitionists, religious fundamentalists, prairie populists, Southern Democrats: They all agreed on that one issue.

As Donald Empson points out it in his great place-name guide “The Street Where You Live,” the first temperance society in St. Paul had been started up a few years earlier. Temperance was a mainstream and quite progressive idea. In fact, the area was a pretty Protestant pocket of a city dominated politically and culturally by the Catholic Church – Mears Park, a few blocks away, was known as “Baptist Hill.” The best-known structure on Temperance Street in its earliest years was a tiny brick chapel at 10th that changed hands among various Protestant congregations: founded by Congregationalists in 1857, then occupied by Universalists, a Church of Christ congregation, and finally to a group of Swedish Methodists.

Now here’s the thing about all of these Protestants: Much of the support of the temperance movement in America and in the Midwest came from Protestants. A lot of those Protestants believed that big-city Catholic immigrants from places like Germany and Slovakia and Ireland, with their beer brewing and sacramental wine and general carousing, were corrupting the fabric of wholesome Puritan American society irreparably.

I don’t know if this is true, as I didn’t see anything in my readings that supported this specific idea, but I wouldn’t be at all surprised if the name of Temperance Street carried a very subtle ideological charge for those neighborhood Protestants. Perhaps they saw Temperance Street as an island of Puritan self-righteousness in the midst of Catholic St. Paul. Who knows how many times the name of the street was invoked from the pulpit of that chapel.

Of course, Empson points out, there was rumored to be a saloon somewhere along Temperance Street later on, so even if that idea existed, it disappeared pretty quickly.

About as exciting as you might expect a street named Temperance to be, most of the area was and remains modest, industrious and quiet. It’s somewhat out of the way, located just out of Lowertown’s bustling commercial core and not quite close to the Capitol to be in its sphere of influence. There was a very large and successful hardware wholesaler located there during the area’s industrial heyday, and the City Market was located there, as well, doing business under some iron shed coverings echoed in the architecture of the contemporary Farmers Market a few blocks away.

There were a large number of livery stables in the area. The Walsh Block is the most prominent building on Temperance Street today – residences upstairs (as there are today), and variously used for light manufacturing, education and warehousing over the years. It’s a beautifully ornate building, quite intemperate in its fussiness and wonderfully over-the-top iron embellishments. There were a few print shops around here, too – during construction for the condominium complexes, construction crews apparently found a number of lithography stones in the ground. 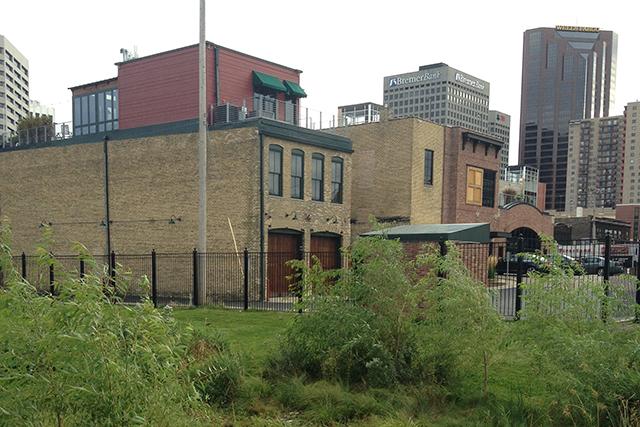 MinnPost photo by Andy Sturdevant
There were a large number of livery stables in the area.

The condos are the most noticeable feature on the street today, and one of the complexes is called Printer’s Row. That strikes me as a somewhat tenuous connection, but I guess “Temperance Flats” is a tough sell. The condos look the way all condos look these days – yellow facades, some brick, corrugated steel, balconies – but they’re actively used, and some of the tenants have hung colorful fabrics and designs in the window to enliven the building’s façade. The afternoon I walked down the street, a video game trailer was parked outside, and some sort of kid’s birthday party was spilling out of a ground-floor condo onto the sidewalk, the lucky honoree and his friends tearing between the two. There’s a tidy grass lot across the street that serves as an unofficial dog park, where neighborhood residents and their dogs meet and greet. 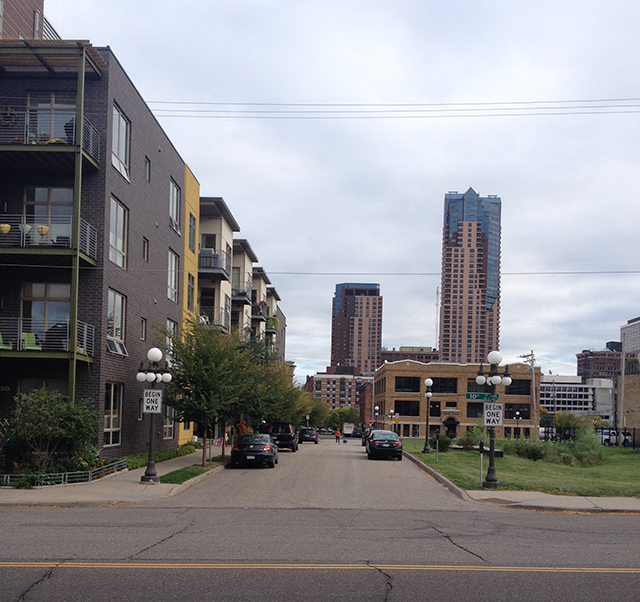 MinnPost photo by Andy Sturdevant
Condos are the most noticeable feature on Temperance Street today.

At the head of Temperance Street is, as noted, the Embassy Suites, built in 1982 in a style that lazily mimics the surrounding brick warehouses. For our purposes, though, its best feature is on the ground floor. In an amusing affront to those Puritans of the 1850s, the long-time tenant is Cork’s: not just a bar, but an Irish pub.

There is also one last amusingly intemperate feature, which is the only street-facing retail shop with a Temperance Street address. Into the Void Records opened two years ago in the Walsh Building, and is the area’s only all-metal record shop. It has the best features of an independent specialty record shop: great posters on the wall covering the spectrum from Thin Lizzy to Wretched, an excellent selection of incredibly arcane vinyl and CDs, loud music on the store’s speakers, and a calendar with information about all upcoming live metal events in the Twin Cities. An Irish flag is stretched proudly over the front counter – there’s a sister store of the same name in Dublin. 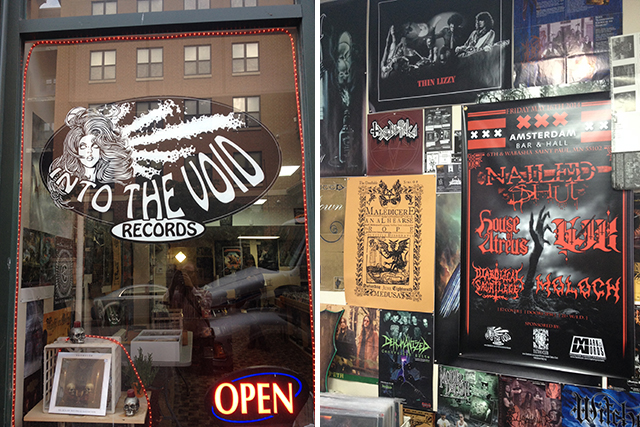 MinnPost photo by Andy Sturdevant
Into the Void Records

Owner Shane Kingsland opened the shop two years ago. Capitol Guitars is next door on 7th Street, and until it closed, the metal venue and bar Station 4 was located nearby. I mentioned I was writing a piece about the street. “I tell people on the phone where we are, and they don’t recognize the street name,” he says. “But when they come by, they say, ‘oh, I know this area.’ ”

I bought two Black Sabbath albums and, with both of them underarm, headed back onto Temperance Street. There were a few others I haven’t owned for years that I considered buying too, but if moderation in regard to the indulgence of the natural appetites and passions is worth naming a street for, it’s good enough for me.