Twelfth Street is the dividing line between downtown proper and the Loring Park neighborhood, though it’s a transition that happens with little fanfare. The intersection at Second Avenue is completely dominated by the Minneapolis Convention Center, and some of the multistory parking structures that surround it. However, there are two eccentric little buildings near this intersection that, though they tend to fall in the shadow of the Convention Center, are as interesting and overlooked as any other buildings in this part of the city. The smaller is the Architects and Engineers Building, from 1920, on the southwest corner of the intersection. The larger is the Ivy Tower, built in 1929 as one tiny part of a massive, unfinished cathedral for the Second Church of Christ, Scientist.

Both buildings were, in some way, created to self-consciously reflect Big Ideas; they’re both testaments to the unbounded, money-fueled idealism that fired the 1920s and was totally wiped out by the Great Depression at the end of that decade. The architects, engineers and Christian Scientists are long gone from these buildings. They have been adapted for new uses in the intervening decades without losing much of their original features, even as they look pretty out-of-step with their surroundings.

Part of the overlooked quality of this area may come from the name of the street these two buildings are on. Nicollet, Hennepin, Marquette, Portland – all of these names conjure up clear ideas about the character and identity of these arterial downtown streets. You could name a few famous buildings, transit routes, restaurants or businesses on each. “Second Avenue”? Not much comes to mind. It’s kind of a blank. The branding possibilities for such a street are limited, unless it’s home to a famous rock club.

Right on the corner of Second and Twelfth is the Architects and Engineers Building, a stately Renaissance-influenced building right down to the Italian-style red glazed roof tiles. It was originally, in contemporary terms, a co-working space. If the original tenants were alive today, we might refer to them as members of the so-called creative class (though what they might make of this neologism is tough to say). Founded by Edwin Hewitt, co-director of a respected architecture firm, the idea behind the building was to give like-minded organizations a place to work and maintain individual offices, but a shared space to pool resources – “library, office employees, drafting rooms, sample rooms, blue printing room and specification printing,” according to one contemporary source. 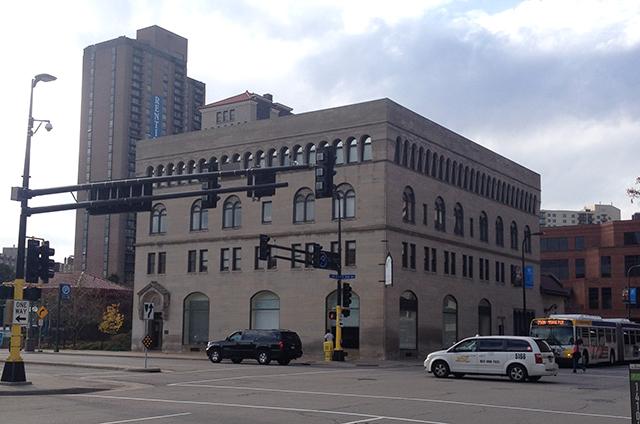 MinnPost photo by Andy Sturdevant
The idea behind the building was to give like-minded organizations a place to work and maintain individual offices, but a shared space to pool resources – “library, office employees, drafting rooms, sample rooms, blue printing room and specification printing.”

On the first floor, there were offices and a showroom for John S. Bradstreet and Company, then the premier interior designers in the Upper Midwest, whose Crafthouse on the other side of downtown was the go-to destination for local elites looking to furnish their mansions with modern Arts and Crafts-styled furniture and fixtures. Elsewhere, there were landscape designers and city planners, as well as the local chapter of the American Institute of Architects. The basement was occupied by a group of fine artists calling themselves the Attic Club, led by the director of the Minneapolis College of Art.

As has been the case with artists since time immemorial, the club had been forced out of its old location in an attic downtown by rent increases. (Worth noting here is the Attic Club was probably the only operation in the building to have a significant female membership.) Also in the basement was the Blue Print Tea Room, where lunch was served at noon every day, giving the buildings’ influential tenants space to sit together, drink tea, smoke John Ruskin brand cigars (the preferred choice of local aesthetes), and argue about the hot-button issues of their various trades. The idea here is the same basic idea that still animates similar spaces today: CoCo Minneapolis, a co-working space not far from the Architects and Engineers Building, describes itself as a place “where independent workers, small businesses and corporate workgroups can gather to share ideas, team up on projects and get some work done.” It’s the same idea. 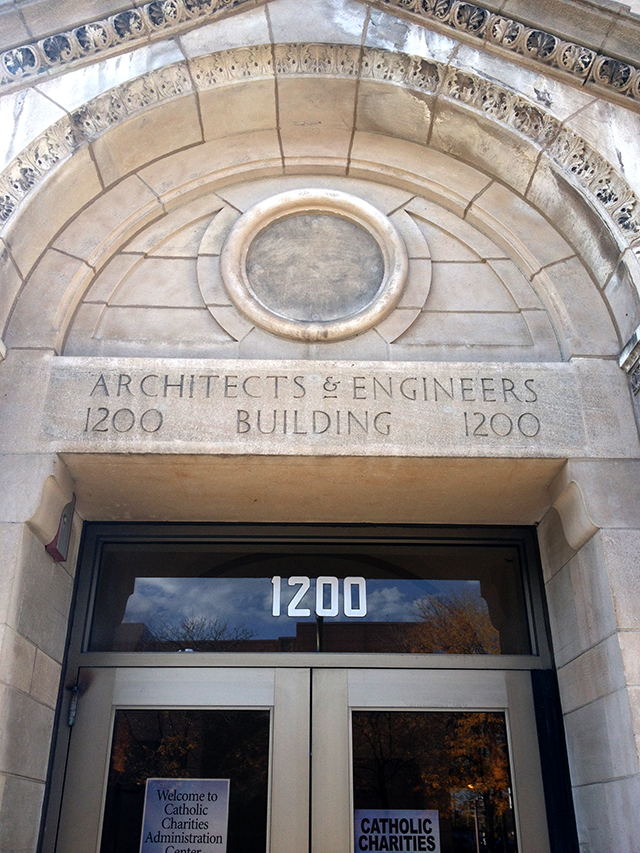 MinnPost photo by Andy Sturdevant
The building is now home to Catholic Charities.

Given the loftiness and idealism of this goal, the building itself is a testament to very distinct early 20th-century ideas about lofty ideals. There are so many features on the building to point out – like tiny stone architects plugging away on the supports near the front door – but the one that sticks out is the spaces above the second-story windows. Each one is hand-painted in gold with the name of a famous architect or engineer. Some of them are still known today, like Michelangelo and Leonardo da Vinci, though most are better remembered among art-history students than the general public. Nineteenth-century Americans like Henry Hobson Richardson and Charles Follen McKim are there, though most are medieval or Renaissance figures like William of Sens (Canterbury Cathedral), Philbert de l’Orme (Château d’Anet), Robert of Luzarches (Notre Dame) and Filippo Brunelleschi (Florence Cathedral). This particular canon reflects the nostalgic, Renaissance-minded values and ideals of the sort of professional man who occupied this space perfectly – it’s humanists and rationalists all the way down the line. 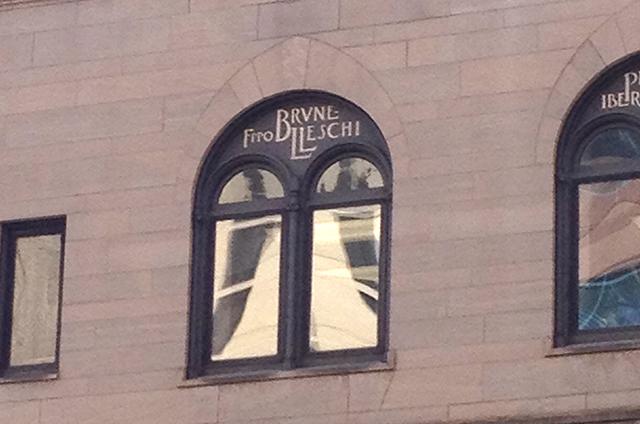 MinnPost photo by Andy Sturdevant
A tribute to Filippo Brunelleschi.

This roll call already seemed quaint, I’d imagine, by the time aggressively streamlined, modernity-fixated art deco structures like the Foshay Tower were going up only a few years later. Think how quaintly out-of-touch the invocation of fussy old Charles Follen McKim’s name must have seemed to a young architect in the era of the modern skyscraper. As utilitarian as the idea of co-working is, I wonder how thrilled young and modern architects were about sharing a workspace whose décor may have seemed intensely conservative, if not vaguely anti-modern.

Quaint though it may have seemed then, the hand-lettered quality of these names is wonderful, and I’m glad they’ve remained all these decades. There’s a resolutely non-mechanical aspect to them, spaced oddly and sized eccentrically, conforming to the constraints of the spaces they’re painted in.

Though canons change and aesthetic standards shift over time, the building was occupied by architects for many decades; there were regular meetings of social clubs for artists there as late as the mid-1970s. It is now home to Catholic Charities, and the interior is very much a working office. The front lobby still has nice arched ceilings, and maybe best of all is a mural atop the front door. It’s a beautiful and surprisingly well-preserved painting of a suited architect and coverall-clad engineer inspecting a set of blueprints, American civilization being constructed by cranes and girders behind them. I couldn’t find the name of the artist, but I hope he or she was a member in good standing of the Attic Club. 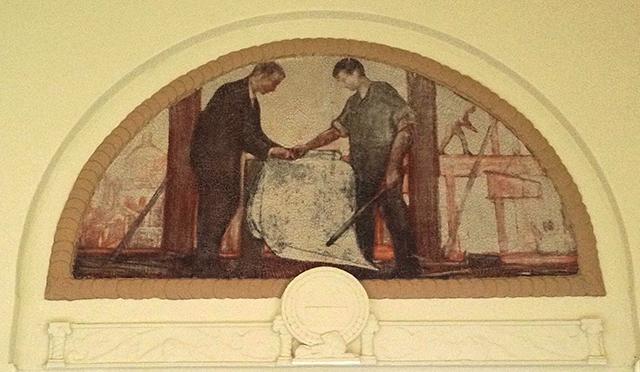 A half-block down Second Avenue is the Ivy Tower, as the building is called today. The Ivy Hotel, enveloping the nine-story structure on three sides, takes its name from the tower. “Ivy” is a pretty late rebranding effort, though. When an investment company purchased the building in the 1960s from the Second Church of Christ, Scientist, the Ivy name was adopted. Perhaps the developers wanted to distance themselves from the relative strangeness of the building’s backstory. “Unfinished Byzantine Ziggurat Christian Scientist Tower” might not look as enticing on the front of a brochure.

Completed in 1929, Ivy Tower is a compact, nine-story tower, designed with a vaguely Byzantine and Mesopotamian look. Despite the interesting tactile qualities of its rough, pebble-strewn concrete surface, it seems a little underwhelming – I once pointed it out to my skyscraper-admiring brother, who sniffed, “I don’t get out of bed for anything less than 10 stories.” It is underwhelming, because it’s only a small part of what should have been a much larger building. Initially, this tower was to be only one of four in a cathedral that would pay homage to the Hagia Sophia in Istanbul, with four minarets and a central domed structure. As Larry Millett points out, however, “1929 was an inauspicious year for grand plans.” The church ran out of money, the rest was never realized, and the architect, poor Thomas Rogers Kimball, died destitute a few years later.

Christian Science was a relatively new sect in the early 20th century, having come out of the “stammering century,” Gilbert Seldes’ memorable phrase for the varied assemblage of evangelical, spiritualist and metaphysical movements of the 1800s. The church had established firm roots in Minneapolis’ influential and powerful New Englander ex-pat community, and 30 years after the first church was founded in Boston by Mary Baker Eddy, had enough capital and influence to make a bold architectural statement in the Upper Midwest. Finnish-American architect Eliel Saarinen, who’d later design Christ Church Lutheran with his son Eero in south Minneapolis, drew up an impossibly elaborate plan that was never realized but, if built, would have rivaled the Christian Science mother church back east. 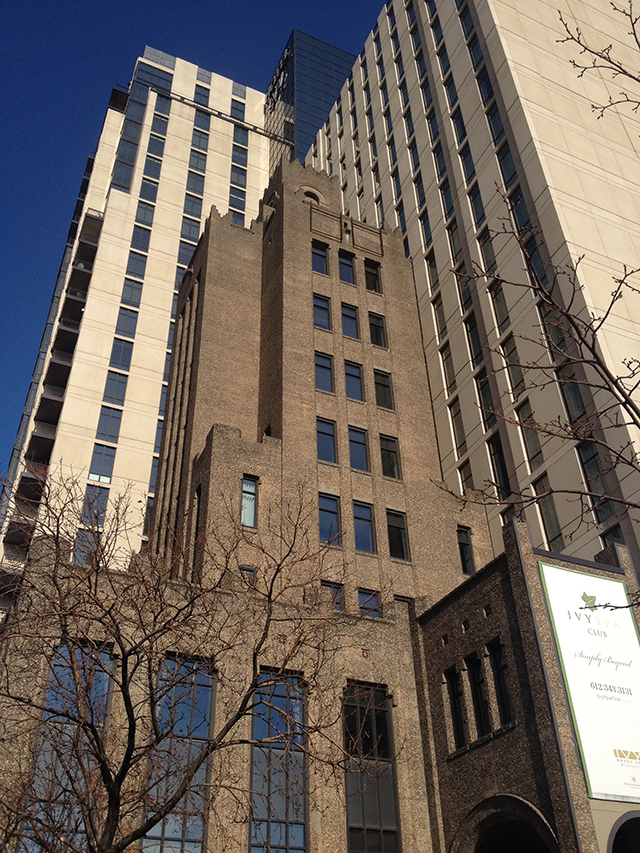 Kimball was brought on later, and his tower easily accommodated the church’s 600 members, as well as making room for a publishing house, offices, and a great deal of space in the upper stories no one had any solid plans for yet. Had the building been completed, who knows what sort of effect it might have had on subsequent development in the immediate area. A rough-textured, pebbly concrete Hagia Sophia might have been quite a sight for conventioneers to hold.

Of course, it was never to be, and the church ended up constructing a very modest, 1960s-style building on the same block before selling its original home. The tower has been in and out of development news regularly since. In another one of those interesting reminders of the cliché about history not repeating itself but rhyming, the Ivy Hotel sprung up around the building in 2007, on the eve of another cataclysmic financial collapse. It went up in the nick of time, and it now surrounds the Ivy Tower on three sides. The first floor of the old church is now home to Porter and Frye restaurant, which is as good place as any on the edges of the Loring Park neighborhood to get a drink and think about big ideas. On the Convention Center’s green plaza, most recently home to Amanda Lovelee, Christopher Field, Kyle Waites and Sarah West’s “Balancing Ground” art installation, you can see both the Architects and Engineers Building and Ivy Tower side-by-side on nondescript Second Avenue, surviving refugees from that particularly well-funded era.