Great Bear Center is a strip mall located at 90th Street and Lyndale Avenue in the middle of Bloomington. There’s not much about the individual tenants that is terribly exciting, although there is a very good Asian grocery called Chan’s Oriental Market, as well as a beloved independent bakery called Sunrise Donuts I’ve unfortunately never had the pleasure of visiting (I never seem to make it to the south metro before 1 p.m.). Owing to its convenient location on a stretch of Lyndale that some have suggested is as close as suburban Bloomington has to a traditional “downtown,” it was an unmarked but long-running Greyhound station until 2004.

Great Bear was built in 1966 and remodeled a few years ago, with a center clock, but it looks pretty much like almost any other strip mall you might find along any stretch of Lyndale Avenue. Or, for that matter, like any other major commercial throroughfare between Lakeville and Big Lake. 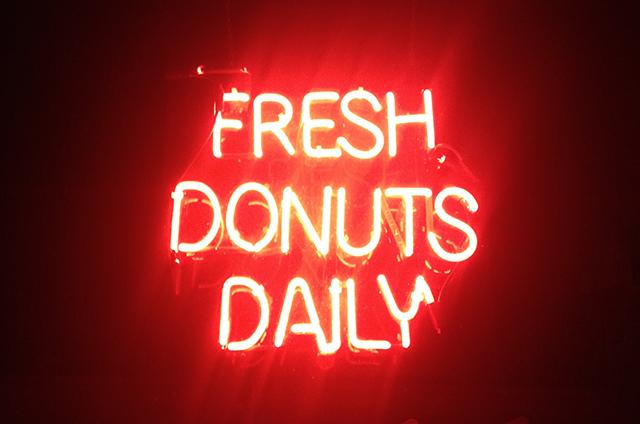 What does make Great Bear Center exceptional, however, is the neon sign on Lyndale that greets passing motorists.

The Twin Cities has some great old neon signs hanging on here and there, but I can’t think of many quite as bold as the Great Bear Center signage. As far as I can tell, it was built in or around 1966, when the shopping center was built, though any identifying information about its installation or manufacturer is long gone. During the day, it’s a cool blue image of a white bear on a wedge-shaped chunk of Googie architecture, that Jet Age style meant to evoke clean, flashing suburban modernity.

MinnPost photos by Andy Sturdevant
Each little feature of the great bear – paws, ears,
teeth – is articulated in red neon.

At night, though, the neon comes alive, and it’s a deep, blinking red that far outshines the wan chain business signage around it. Each little feature of the great bear – paws, ears, teeth – is articulated in red neon. It looks triumphant, as though it’s bellowing the praises of a postwar Bloomington on the rise, in the midst of a population explosion. Between 1950 and 1970, remember, the population of Bloomington increased from about 10,000 to 82,000. It grew from a sleepy rural outpost with little infrastructure to a triad city, almost on the same footing as its twinned neighbors, able to host the World Series and the Beatles in the same year.

What’s “Great Bear”? Who knows? It doesn’t seem connected to any nearby places or landscape features with that name, but it certainly sounds Minnesotan. I suspect the signage to be preserved by default, a sort of benign neglect. I wonder if anyone imagined that the Great Bear Center sign should be singled out and looked after as a sterling example of postwar suburban neon, or if it was just a matter of the funds not being around to upgrade or modernize it, until it was old enough that it seemed like it ought to be left alone. It’s certainly outlasted many similar neon signs, especially in this part of the suburbs. I don’t think identifying it for formal historic preservation in the next couple of decades is at all far-fetched.

The sign itself is not in terrible shape, but it’s probably seen better days. The bear on the south side is mostly burnt out at the moment, but its north-facing counterpart is blinking regularly. Getting right below it, you can actually hear the internal workings grinding away. There’s a pleasingly analog quality to it.

Earlier I mentioned the possibility of this part of Lyndale being Bloomington’s downtown. This is something that might have caused you to raise a skeptical eyebrow if you’re a person with strong opinions about the south metro. Bloomington is famous for not really having a downtown, in the traditional sense – a Star Tribune article from a few years ago sought to identify “downtown Bloomington,” naming such candidates as Old Shakopee Road and Penn Avenue, the Mall of America, or 98th and Lyndale, but not really landing on any one of them. “If you asked someone to meet you in downtown Bloomington,” queried then-Bloomington council member Steve Elkins in the piece, “where would you go?”

One answer is provided on a wall plaque at David Fong’s restaurant a few blocks away. Another neon-enhanced postwar landmark, some text accompanying a painting of the building by Erik Sletten identifies the site where Fong founded his restaurant in 1966 as the spot that “would become the unofficial heart of downtown Bloomington.” 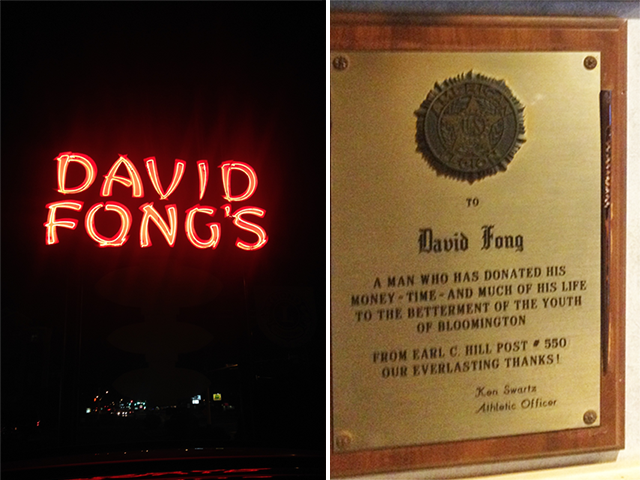 MinnPost photos by Andy Sturdevant
Fong founded his restaurant in 1966 as the spot that “would become the unofficial heart of downtown Bloomington.”

The walls of David Fong’s clearly place it in the pantheon of Bloomington landmarks. The lobby is lined with proclamations by the city and other government bodies, accolades by professional organizations, lovingly framed photos from the Minnesota Historical Society and articles from local papers, trophies won by amateur sports teams the restaurant has supported over the years. Search for a mention of David Fong’s in the archives of the Strib or the Bloomington Sun, and you’ll find some profiles and reviews, but mostly references to community meetings, post-funeral gatherings and other events in the restaurant’s downstairs banquet hall. If this stretch of Lyndale is downtown Bloomington, Fong’s is sort of the town hall.

Fong emigrated to America with his family in 1948, at age 14. His father ran a restaurant on the north side of Minneapolis, where he also worked. A few years later, in the late 1950s, Fong opened a takeout place in a storefront at 98th Street. As the story goes, he was aiming for Richfield and overshot it by a bit. A few years later, the combination restaurant and cocktail lounge, with gold-flecked wallpaper and mood lighting, opened several blocks north, where it remains today quite untouched from its ’60s heyday. Fong is retired, a leading citizen of Bloomington, and his son still operates the restaurant.

The signage outside is, like its 1966-era brethren up the street, fairly unchanged as well. The neon is still as attention-grabbing, though the oval shapes below the neon noting “Chinese-American cuisine” are now blank. As a visual presence and piece of popular architecture, it’s a reminder, too, of what’s changed since the 1960s. This style of typeface, sometimes known as “chop suey” lettering, has more or less fallen out of favor today (and just as well). Like chop suey, it’s a purely American invention that is nonetheless historically identified with Chinese cuisine. 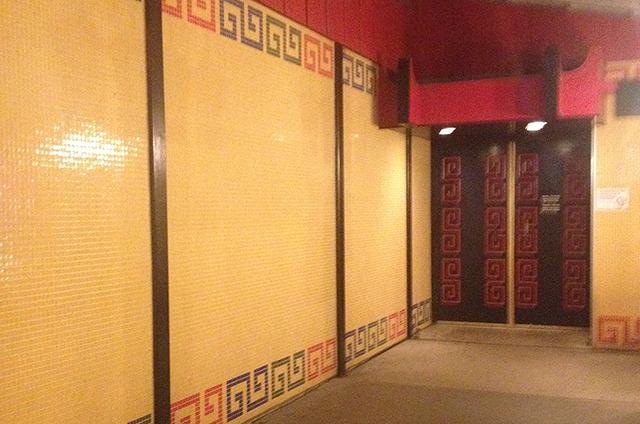 MinnPost photo by Andy Sturdevant
If this stretch of Lyndale is downtown Bloomington, Fong’s is sort of the town hall.

David Fong’s was one of very few Asian-owned restaurants in Minnesota when it opened. There’s a wonderful photo in the lobby of the ribbon-cutting ceremony at the new restaurant in 1966, Fong and his young family surrounded by smiling diners and city officials. In the past 20 years, there are now hundreds, perhaps thousands of Asian-owned restaurants, in Bloomington and nearly everywhere else.

This stretch of Lyndale Avenue is inauspicious in most respects, but these two architectural statements a few blocks away from each other connect it to its 1960s heritage.