While waiting for a Blue Line train out of the airport a few weekends ago, I struck up a conversation with an out-of-town traveler heading downtown. She had some extra time before her returning flight in a few days, and asked for some recommendations for things to see along some of the stops on the line while she was making her way back. Which stop, for example, did I live near?

The Lake Street/Midtown stop, I told her. Lake Street is one of the best streets in the city. I thought of the classic T.D. Mischke column, about driving an out-of-town visitor across the Marshall Avenue bridge and showing the full scope of the city’s cultural, social and economic life. The best of the Twin Cities, encapsulated in one major thoroughfare.

Ah, so I should go see the Lake Street/Midtown stop, she said.

I mean, you could go there, I said, but I’m not sure how much you’d get out of the immediate experience, especially if time is a factor. The area around the Lake Street/Midtown station platform isn’t really much of a place for wandering around. There just isn’t really that much there to see. If you have some time to hop on a 21 and go either direction, there’s a wealth of excitement in store. But down around the station itself? Not as much. 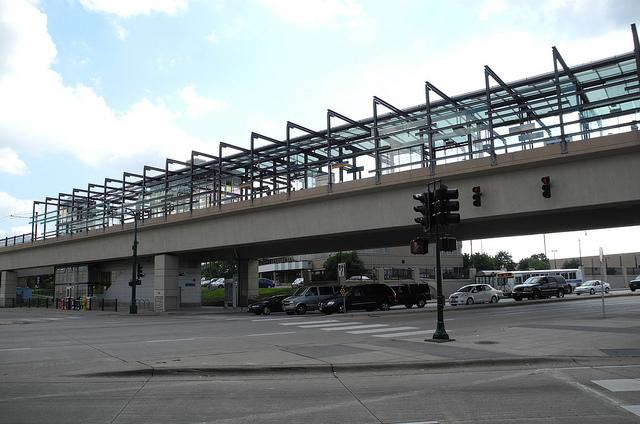 The thing about the Blue Line is, until you get to maybe Franklin Avenue or definitely Cedar-Riverside, there’s not much to see right around the immediate stations in South Minneapolis. Minnehaha Park? One of the best places in the whole city, no doubt, but not universally beloved as a casual wintertime visitors’ destination. The VA Center? Very little to see on foot. Fort Snelling? Some parking lots and government buildings – there used to be a Fort Snelling Officer’s Club where you could smoke indoors and buy tax-free liquor, but I don’t believe it’s open to the general public these days. Even 38th and 46th Streets are fairly unexciting. The Cardinal Tavern on 38th Street has a very enjoyable meat raffle (plus a great mural on the side facing away from the station). The grain mills are impressive architecturally. But this is pretty slim pickings: otherwise, I think of the stretch of Hiawatha between these two stations as the Self-Storage District, for its preponderance of facilities filled with furniture and personal effects locked away behind roll-up doors.

The Lake Street/Midtown station does have a number of interesting things to see and do on foot, certainly a lot more than any other station to the south. Within a two-minute walk, you can get to all sorts of attractions: Le Town Talk and that beautiful sign. Right next door is T’s Place, with beautiful pressed tin ceilings, some cool paintings, a menu of curry-infused Ethiopian food, and – later in the evening – the most face-meltingly loud slow jams in the city. The Gandhi Mahal restaurant is a few doors down. The lamb Shahi King Korma is one of about five local dishes I’d ask for on my deathbed, and the owner, Ruhel Islam, has some amazingly ambitious projects going. There is an apiary on the roof, and a network of community gardens around the neighborhood from which the restaurant obtains most of its vegetables and herbs. Most impressively, in the basement, there are tilapia fish tanks, a whole aquaculture setup, with plans for future additions that might include shrimp. Islam gives tours occasionally. It’s something to see. 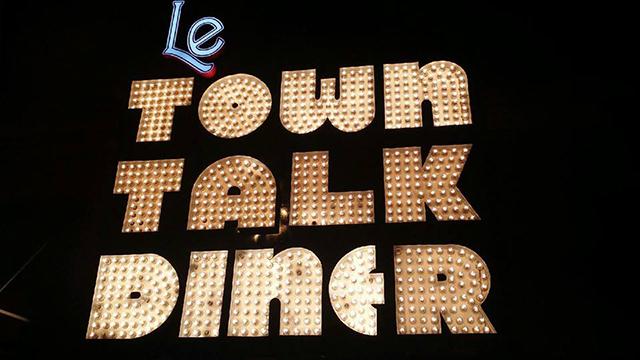 The Farmers Market is located in a southwestern lot near the YWCA, which is always worth seeing in season. There are big plans for redeveloping this area in the near future with the stated goal of addressing some of the gripes in this column about the street life – though the current plans bizarrely puts the Farmers Market and a public plaza facing the train tracks and not Lake Street.

(Also, certainly worth mentioning for those interested in vernacular signage, Minnehaha Liquors is bested only by Lowry Hill Liquors and Hum’s in my personal rankings of noteworthy liquor-store neon signage.)

Listing off these attractions makes me think, hmm, maybe I should have recommended the out-of-town visitor stop off at Lake. All those places are great, and they’re all so close to the train station.

Problem is, for every great attraction in the area, there are two anti-attractions that are a little less exciting, and tend to overwhelm everything else. There’s an Arby’s. There’s the Blockbuster that became an auto shop. There’s the Minneapolis Community Education complex, which isn’t much to look at. And of course, spanning the gulf between Rainbow and Target, there’s a veritable Sargasso Sea of asphalt, maybe the most daunting parking lot in a city with no shortage of daunting parking lots.

We’ll return to that particular corner of the Lake Street/Blue Line intersection momentarily. We must first turn our attention to the Hi-Lake Shopping Center, located on the northwest side, a site which almost transcends any value judgments on the traditional good/bad continuum. 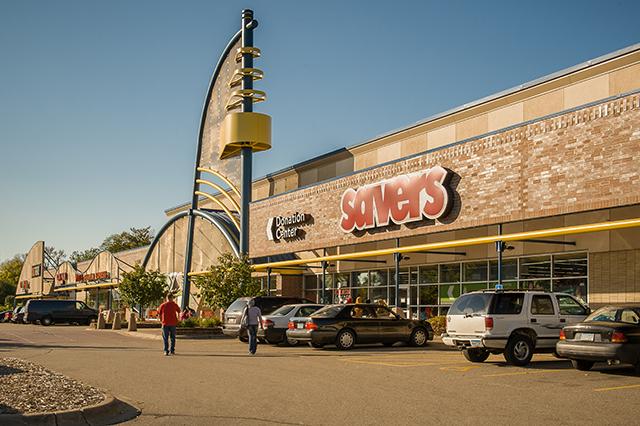 Courtesy of Wellington Management
The Hi-Lake Shopping Center was renovated to the tune of $3 million in 2004.

The Hi-Lake Shopping Center was renovated to the tune of $3 million in 2004, and it is truly one of the most bizarre retail facades in the city. If, by some miracle, it remains untouched for the next 60 years, the Hi-Lake Shopping Center will be heralded as one of our outstanding homegrown pieces of weirdo commercial architecture. It’s one of those things that looks ridiculous to us now (and it does look ridiculous, right?). But if we can just be patient and wait out the demands of our contemporary taste, our grandchildren will be richly rewarded. Maybe.

Rising from the Savers in the middle of the plaza is some sort of blue and yellow metal – well, I’m not sure what you’d call it. A kind of upswept, vaguely space-age fin, like the kind of thing you’d see on a futuristic car. If it had been built in the 1950s it would be a minor Googie landmark – that is, the style of vernacular architecture described by one writer as “bold angles, colorful signs, plate glass, sweeping cantilevered roofs and pop-culture imagery,” meant to capture drivers’ attention on roadsides.

But the Tomorrowland trappings of Hi-Lake Shopping Center are not of that era at all. It’s 50 years too late, at least. Maybe you’d call it neo-Googie.

The Hi-Lake Shopping Center was built on the site of the old Twin Cities Rapid Transit train yards in the 1950s, which I am sure did not constitute the most picturesque vista in south Minneapolis. There’s a actually a brief history of the shopping center and surrounding area on the Lake Street Council’s website, a narrative which tips its hand in an interesting way. The history from 1885 is very sober, straight-forward accounting of the facts and dates of the area. Then, in the 1950s, it totally and delightfully goes off the rails into American Graffiti-infused personal oral history territory. Here, the anonymous writer abandons any pretense of objectivity and makes mention of specific businesses and the subcultural affiliations of its clientele, not to mention “physical activity,” submarine races (!), and – maybe best of all – “dollar birthday cakes,” which were puddles of a dollar’s worth of gasoline poured out on the street and ignited to fete a birthday boy or girl. Perhaps the renovation of the shopping center was meant to call back to this postwar streamlined automotive quality the writer is invoking. I guess we could do a Kickstarter to raise funds for a heroic bronze statue of a drag racer in the traffic circle between the Savers and the Teppenyaki Grill and Supreme Buffet. That might be something to see.

The worst part of the surrounding area, though — the primary thing that dissuaded me from recommending the Lake Street/Midtown station as a walking destination — is the Target on the northeast corner of Lake Street and the Blue Line. I go there all the time to buy paper towels and socks, and I do enjoy the bustling, free-for-all quality on the inside, but as a thing to see from the street, it’s really terrible.

The only nice thing you might say about it is that, as far as Target stores go, it’s historically noteworthy. It was the first Target built outside the suburbs and in the city, in 1976. You wouldn’t know it from walking past, though, as there wasn’t much of an effort to adapt the site to the demands of an urban space. The area was once the Minneapolis Moline tractor factory, so — like the site to the old train yard west of the Blue Line — was not a terribly picturesque spot historically. It looks like a cyclone carried a standard-issue suburban Target and its enormous parking lot from several miles northwest and just plopped it down on top of the old factory site wholesale. You can almost see the tractor factory foreman’s feet sicking out from underneath the edge of the building and then curling up as you walk past. 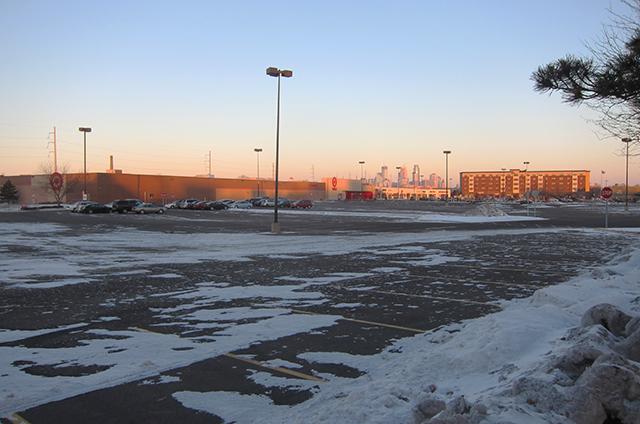 MinnPost photo by Tom Nehil
The only nice thing you might say about the Lake Street Target is that, as far as Target stores go, it’s historically noteworthy.

Of course, it’s hard to convey the scope of all this to a tourist with a limited schedule who wants something easy. Hopefully she spent some time in Cedar-Riverside or Nicollet Mall.

Or who knows? Maybe she ignored my caveats and spent some time around the Lake Street station. Maybe she brought back some stories to her friends back home about the weird thrift store with the futuristic space-mast and the restaurant with the aquaculture in the basement.

Blue Line’s Lake/Midtown stop: Where else can you find a space-age fin and underground aquaculture?