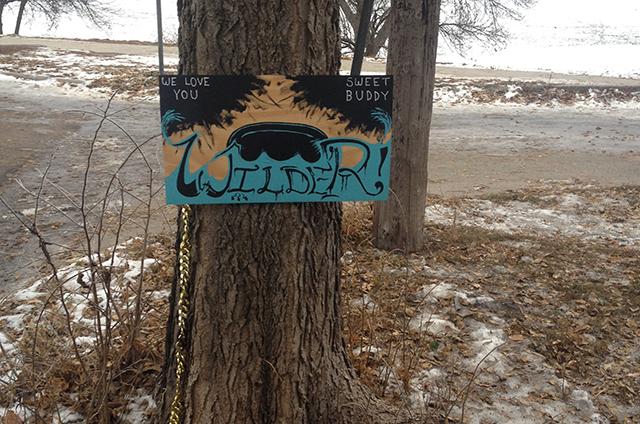 MinnPost photo by Andy Sturdevant
A nightstand with candles, flowers and books eventually disappeared, but the nameplate in honor of Wilder Mac Burnham remains.

A few weeks ago, I arrived home to find a small shrine set up outside my apartment building. Over the weekend, my neighbor had died. I’d feared the worst when I walked past it that first time, hoping it was maybe a birthday tribute or the remnant of a surprise party. Another tenant in the building confirmed the bad news later that night, though. My neighbor, Wilder Mac Burnham, was dead at 23.

I didn’t know Wilder well, having moved in fairly recently. But he was a very sweet young man, and I learned subsequently he’d been an artist, zinester, urban explorer and musician – the tributes on his online obituary page made me wish I’d known him better. There were tea candles and books and notes and flowers resting atop a small nightstand, and a board attached to a nearby tree with his first name painted on it: Wilder. The blue and black embellishments painted on the board itself are mournful, but not exactly somber. There’s joyousness to it – his name is punctuated with an exclamation mark, exactly like the way he’d signed his name when he left me a note under my door welcoming me to the apartment. Wilder!

Sweet buddy, the board reads. We love you.

The nightstand eventually disappeared, but the nameplate remains. Every time I walk into my apartment, I think of the young man across the hallway.

The city is full of these sorts of markers – you probably know of a few along your regular commute or in your neighborhood. One finds them at intersections, along major roads, in neighborhoods or on traffic islands. They take the form of white-painted ghost bikes, small crosses (descansos, as these roadside markers are called in Spanish), bouquets of flowers, flags, stuffed animals, liquor bottles, photos stapled to utility poles or taped around trees. They come up and sometimes go back down again quickly, usually executed without permission by family and friends. Other times, they stay around for months or years. They mark the site of an accident, or murder, or sometimes a place close to the deceased’s heart.

Of course, as large a part of the urban landscape as these memorials are, there’s no directory of them. You can really only find them by stumbling across them in person – they may be the last objects in the public sphere that aren’t comprehensively geotagged, cataloged and searchable.

This is probably because they exist in a sort of quasi-legal limbo. And they’re not necessarily celebrated in many – maybe most – corners of the city. Memorials are a contentious issue, as raw as you might imagine an issue existing at the cross-section of public grief, private property, taste, public safety, cultural sensitivity and legality to be. A cursory look around the Internet will bring you to story upon story from around the Twin Cities of reactions to the phenomenon: threatening notes left on existing memorials, disagreements about whether memorials for murder victims glorify gang activity or incite violence, and accounts of residents making a decision to remove molding stuffed animals or broken liquor bottles from neighborhood streets.

In Minneapolis, memorials are generally permitted to remain in place for two weeks after they’re reported, if they don’t block traffic or constitute a hazard. This seems to be a somewhat loosely enforced rule, having more to do with where the memorials are located, how expansive they are, if they’re on public or private land, and whether or not the property owner or other neighbors are inclined to call 311. The operator I spoke to at 311 mentioned incidents of people congregating around them, night after night. Laws vary throughout the rest of the metro and the state. In Wisconsin, roadside memorials are banned outright.

The ghost-bike movement is somewhat of an exception, in terms of visibility – they are cataloged and noted online, both locally and nationally. Many of these ghost bikes around town are maintained by volunteers, as per this touching post from the Minneapolis Bicycle Coalition blog. The ghost bike is a white-painted bicycle, tied to a pole near the site of an accident involving a cyclist fatality, with flowers, signage and other memorial items left by family, friends and cycling advocates. They first appeared in St. Louis about 10 years ago, and have spread throughout the world since. Ghost bikes commemorate the life of the cyclist killed, but also carry a political and public-safety subtext to passersby – be aware of cyclists – in the same way the descanso reminds the motorist of the potential deadliness of the automobile. Like this person, you could be a victim, they say, or you could easily be on the other side. So be careful. 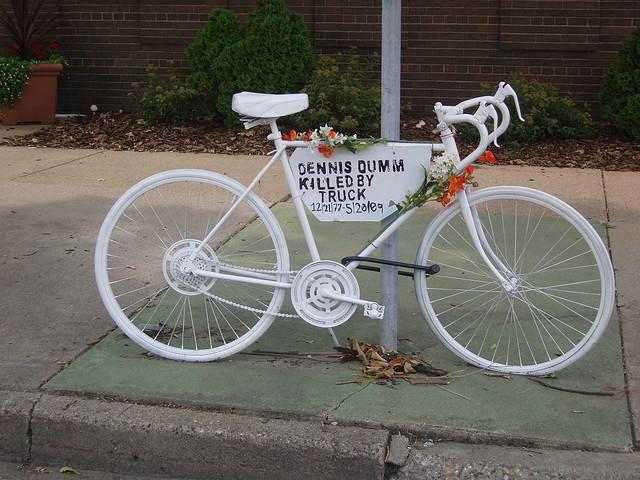 CC/Flickr/Zac Attack
Ghost bikes commemorate the life of the cyclist killed, but also carry a political and public-safety subtext to passersby: Be aware of cyclists.

There have been at least 11 ghost bikes in Minneapolis since 2008. The most recent is for Marcus Nalls, killed by a drunk driver last January on Franklin Avenue. Elsewhere in south Minneapolis is a ghost bike for Elyse Stern, killed by another drunk driver at Cedar and Lake less than a year before Nalls. Around Powderhorn Park, there are wooden plaques with her name painted on them – Elyse! – attached to utility poles, scattered throughout the area.

The few others I’m going to highlight are located fairly close to my apartment, and they’re ones I see when I’m making my usual rounds. One could write a field guide to memorials for every part of the cities, and you undoubtedly could identify several in your neighborhood. It’s this personal proximity and sense that these markers are best – perhaps only – observed by neighborhood residents. It’s part of what makes them as poignant as they are. 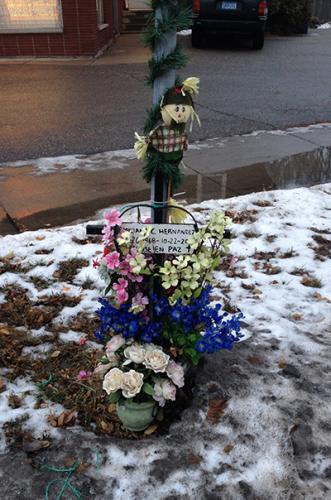 In Longfellow, not far from Lake Street, there’s a wooden cross attached to the base of a street sign, surrounded by silk flowers: Emiliano C. Hernandez, July 21, 1968 – October 22, 2009, descanse en paz. This one, as the dates indicate, has remained untouched and maintained for more than half a decade. I can’t find an obituary for Hernandez online, but I presume he was killed in an automobile accident. I’ve always been impressed with how nicely this site is maintained, and for the duration of that maintenance – as of this past weekend, the flowers appeared to be fresh, as did a scarecrow doll mounted over the cross. Hernandez would seem to have family or friends in the area committed to keeping the marker in order.

Also in Longfellow, a few printed images in plastic sleeves have appeared on utility poles this month. They memorialize April A. Hoekstra. She died recently at age 59: “lost her battle with cancer, November 12.” The image on the paper shows not just her, but also her dog, Alaska. I find this particularly poignant – as with many dog owners in the city, many of her neighbors undoubtedly knew her from dog walks around these very streets. The comments left on her Star Tribune obituary back that up – Hoekstra is remembered for her work with animals, and specifically as a person who, with Alaska, you might run into walking your dog in the evening. Leaving these markers along those city streets is a beautiful gesture. 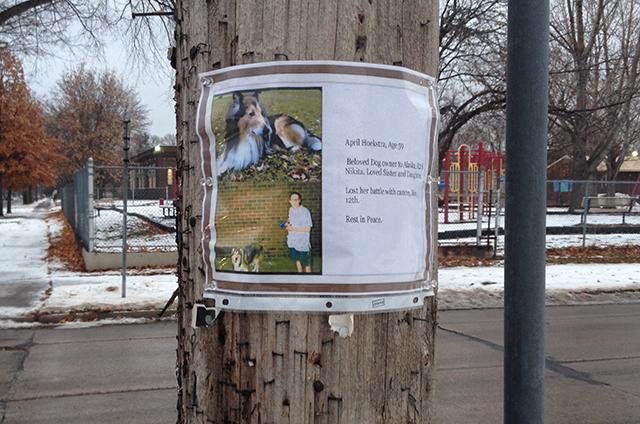 MinnPost photo by Andy Sturdevant
April A. Hoekstra, who died recently at age 59, is remembered along with her dog, Alaska.

Most handmade memorial markers like these disappear after a few weeks or months – they’re removed, or simply disintegrate, getting lost in the bustle of city life. Even more permanent-seeming descansos or ghost bikes only have a lifespan of a few years at most.

There’s not a lot of death in most of our day-to-day lives, but these memorials are maybe one of the most visible aspects of what they used to call ars morendi in the Middle Ages – the art of dying well, a concept closely connected to the memento mori, an artistic reminder of one’s mortality. Roadside and neighborhood memorials are an artistic expression of private grief made public, a grief that’s more raw than a lot of our more antiseptic ideas of death usually allow. Sure, some of these memorials don’t weather well. Some are tacky. But death isn’t necessarily an elegant or tasteful thing. And the best ones – the marker for Wilder I see every day – remind us not only of death, but of the life of someone we’ve shared a community with. They physically remain a part of the fabric of that community, even after they’ve gone.

Neighborhood and roadside memorials: an artistic expression of private grief made public