The great Hollywood actor Henry Fonda – Young Mr. Lincoln, Tom Joad, Juror 8, Mr. Roberts – is not typically associated with Minneapolis. He was generally thought of as a Nebraskan, having been born in tiny Grand Island and beginning his acting career in Omaha. He considered Nebraska “home” his entire life. But Fonda did indeed spend two years in Minneapolis, from 1923 to 1925, studying journalism at the University of Minnesota, and working and rooming in a settlement house in North Minneapolis.

Fonda is one of those celebrities we in Minnesota can make a half-hearted claim on, but not really justify bragging about too much because they didn’t live here for very long. (My friend Brad Zellar has suggested the terms “Microsotans” – Amelia Earhart and Tammy Faye Bakker, both of whom have been profiled in this column and who spent about a year each here, might also fall into this category.) Fonda’s two years in Minneapolis weren’t a particularly fruitful or eventful time in his life; in fact, the whole experience only takes up about two pages in his memoirs.

That said, a look at Henry Fonda’s time in the city does give us some insight into his later career and his values, and tell us a great deal about the Minneapolis of the 1920s. Fonda’s experiences were limited to a few square miles encompassing Near North, downtown and the University of Minnesota campus, and the streetcar lines that connected them. Most of the important sites in his time here are gone, but we can still follow his footsteps and see the city as he might have. Retracing his life here won’t tell us much about Hollywood, the art of acting or film, but there are some interesting tidbits about the history of journalism, transit and social work to be picked up along the way.

Why did Fonda choose to attend school in Minnesota? The obvious choice for a kid from rural Grand Island was enrolling in the University of Nebraska. However, while in high school, Fonda worked odd jobs for Northwestern Bell. The company was headquartered in Minneapolis, and Fonda figured he could have his job transferred to the home office and stay with the phone company as he worked his way through college.

His plan only half-worked. He was hired by Northwestern Bell, but not as a full-time employee – only for troubleshooting on weekends. Fonda would have clocked in at the same address that phone company employees do today, at 3rd Avenue and 5th Street, where the CenturyLink Tower is now located. The art deco Northwestern Bell building was one of the crown jewels of downtown Minneapolis after opening in 1932, but Fonda didn’t work there. The building that preceded it on that site was markedly less impressive.

Once accepted to the U and working for Northwestern Bell, Fonda declared a journalism major. He enjoyed writing and had a few short editorial pieces published in Nebraska. One biographer described his attraction to journalism as a “conventional” option for a boy who’d come from “conventional people” – it was “a creative, active occupation, nominally stable,” for those “trying to follow a design for living.” That’s not totally accurate. Describing journalism in the 1920s in such bland terms doesn’t quite capture how novel and unconventional the idea of studying journalism in an academic setting was at the time. As a profession, it still carried a whiff of disreputability.

The journalism department at the University of Minnesota that Fonda enrolled into barely counted as a department. In fact, it had only been established the year Fonda enrolled, 1923. It wasn’t formally absorbed into the School of Liberal Arts – or even given designated classrooms – until almost 20 years later. It was an outlier, vaguely associated with the school of business, but a sort of bastard program with no permanent home on campus. Before the 1920s, the only journalism classes were offered at the St. Paul campus, for aspiring agriculturalists looking to edit farm journals. The university’s hesitance to fully embrace the academic study of journalism was matched only by that of the city’s journalists. “The typical reporter and editor saw something positively dangerous in submitting his work to the bourgeois influence of a university,” writes James Gray in an early history of the U’s efforts to establish a journalism department. “Journalists might be trained; newspapermen, like poets, were born.”

This was the fledgling department Fonda entered in the fall of 1923. He would have darted from class to class in the oldest, most ramshackle buildings at the U – basements in Folwell Hall, the old Music Building, attics in Pillsbury Hall. His colleagues in the journalism program were young and exceptionally ambitious strivers. An early history of the department boasted of the willingness of its students to shoulder intensely demanding work loads: They would “step up the pace of the journey toward independence by taking on exacting jobs or nearly full-time assignments. … He will close his books after a late afternoon class and report directly for duty on the night shift. … Though his flesh may shrink under these trials of strength, his spirit seems to thrive.”

This double-full-time work and school load perfectly describes Fonda’s experience. The job at the phone company didn’t pay nearly enough for him to survive, so a colleague at the U got him a second job, with room and board, “at the Unity Settlement House at the north end of Minneapolis,” Fonda wrote later in his memoirs. “The house was a three-story brick building with an enormous playground in the back. Inside, it had a huge gym, a track, basketball courts, and underneath lockers and a pool. They ran my tail off, those kids at the Settlement House.” Fonda lived there and worked with boys for two years. 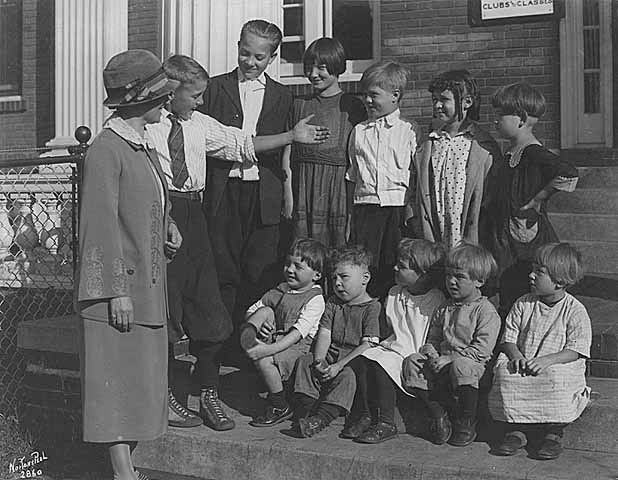 The Settlement House movement was a few decades old. Working in the model of Jane Addams’ Hull House in Chicago, the settlement houses were privately run organizations that provided social services of all kinds for new Americans in the city’s poorest neighborhoods – everything from classes, employment training and medical services to courses on cooking, sewing and recreation. The boys Fonda worked with would have come from all over – Scandinavia, Eastern Europe, Ireland, Germany, Italy, elsewhere. Unity Settlement House was founded on the north side in 1897, and was located between Washington Avenue North and Second Street North at 17th Avenue North, where the Old Colony gas station is located today. (The 1924 city directory shows him living and working at that address.)

The house closed in the late 1960s and the building was demolished, but the organization was absorbed into the Pillsbury United Communities foundation, which continues much of the same work today in community centers around the cities.

Fonda’s coaching and activities work at the Unity House, combined with his studies and telephone company work, was relentless. “I had eight o’clock classes, I worked from three to seven at the Settlement House. Over the weekend, if Northwestern Bell needed me, I’d troubleshoot for them,” he wrote. After 7 on weekdays, he’d eat dinner with the kids at the Settlement House, and then organize basketball games with them until late. “By eleven-thirty, I’d get upstairs to my room and the homework for the next day. Every night I’d fall asleep over my books, dead tired.”

Commuting between the Unity House and the university, Fonda would have taken the Washington Avenue streetcar, and transferred to the University Avenue line near the West Bank. “Cost a nickel for a 45-minute ride, but when it was thirty below zero … that damn forty-five minute ride with a ton of books on your back or in your arms seemed one helluva lot longer,” he later recalled.

He couldn’t keep up the pace. “By the end of my sophomore year, I was so exhausted that when they passed out the blue books for the final exams, I just sat in class and drew pictures instead of answering the questions. That did it! I flunked out of Minnesota.”

In 1925, he returned to Nebraska. There, he’d become involved in a theatrical production at the Omaha Community Playhouse, run by Marlon Brando’s mother, Dodie. Acting became his passion, and a few years later, he’d strike it east to try his luck on Broadway. Henry Fonda never returned to journalism or coaching basketball – or Minneapolis.

As noted, Fonda’s time as Microsotan isn’t particularly novel or eventful. However, it’s worth pointing out that so many of his roles are associated with a sense of earnest, hardworking idealism and goodness – “no one has a more American voice … a more Midwestern look and character, straightforward, open and unpretentious,” as Noel Coward said of him. It’s the sort of character and sensibility that he might have cultivated working in a Settlement House with the children of immigrants, or studying journalism in a fledgling program fighting for respectability.

At the very least, you can drive past the Old Colony gas station and know that, for two years, the man who played Tom Joad lived in a tiny dorm room there.