Three years ago this week, I filed my first Stroll column in this very space in MinnPost. Not knowing what potential readers would be interested in, I was pretty sure I’d have to get the whole thing off on a good foot by writing about a location in the Twin Cities that everyone had an opinion about: Uptown Minneapolis.

As I said in the first column, complaining about (and, its unspoken corollary, singing the praises of) Uptown is a great Twin Cities pastime. This was true in 2012, this remains true in 2015. My favorite daily local newsletter, Secrets of the City, has been running a series of back-and-forths on The State of Uptown recently: This week, the editorial voice decried Uptown as a crowded youth culture dumping grounds full of “faux-upscale glorified dorms,” only to be countered the next day by an enthusiastic new resident, who claimed the “old uptown sounds corny” and the newest version has everything a young professional needs for a rich and fulfilling life.

Given the evergreen character of this debate, I thought a return visit to a few of the sites covered in the first column might be worthwhile, to see how they’ve changed and how the neighborhood around is looking these days.

Certainly there’s been a lot of building projects coming to an end around Uptown, especially condo and apartment developments. Elan, Lime, Track 29, the Walkway – all of these are high-end residential housing developments that opened in 2013 and 2014. They’ve added a lot of new residents to the area, and it feels a lot more crowded, a lot livelier than it might have half a decade ago.

In a lot of ways, Uptown is where a certain idea of the contemporary Minneapolis – the punky, scrappy, Prince-y prairie metropolis – was born. The Uptown Bar, the punk rock McDonald’s, the “Rocky Horror” midnight screenings, the Prince song “Uptown.” All make up a larger myth, and it’s worth remembering the institutions, places and people that were part of that creation myth.

I believe it’s the right (possibly even the responsibility) of every Minneapolis native and long-term resident to complain about the new Uptown as much as they want. It keeps the newcomers on their toes. It reminds them that while you can rent a luxury condo, you can’t rent culture. It reminds them they’re part of a deep historical narrative, whether they care about it or not. When I was a recent transplant, I caught all sorts of hell for being ignorant on all sorts of local facts and figures. I deserved every bit of it (even from the guy who threatened to throw me off the Hennepin Bridge after I made a joke about not knowing who Conrad at First Avenue was). Those challenges made me a better Twin Citizen. 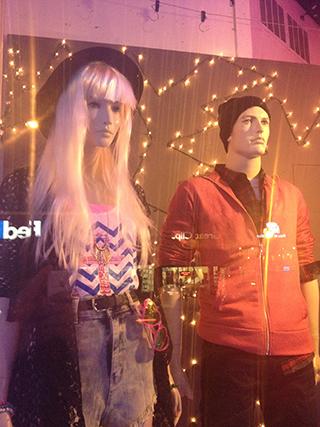 MinnPost photo by Andy Sturdevant
American Apparel and Ragstock mannequins are locked in a
motionless and silent eternal dance-off.

That said, Uptown is a lot more complicated and a lot more interesting than it sometimes gets credit for being, and it’s the right and responsibility of new residents to push back in equal measure against myths, stereotypes and rampant, unchecked nostalgia; the things that made Uptown great in 1985, 1995 and 2005 are largely still a fact of life today. For all of those reasons, I go to Uptown all the time. For one, it’s about the easiest place in town to get to by bus or bicycle – a straight shot down the Midtown Greenway, the 21 or the 6. It’s one of just a few neighborhoods in the cities where it’s easy to hail a cab on the street. And it’s still one of the best places to buy books, see movies, and – at least until First Tech closed – get a computer fixed. I’d say it’s too expensive and monochromatic to be a really great destination for eating or drinking, but it’s not bad, compared to some of the sleepier residential districts of South Minneapolis and St. Paul. You can still get a fairly cheap mixed drink or glass of wine and a decent plate of food. And, more than any other neighborhood, it’s a place where you see people out on the street, at all hours, seven days a week.

Checking back on that first column, we find that the Highpoint Center for Printmaking remains a little further down Lake Street, on the frontier of Lyn-Lake. (There’s new work by Julie Buffalohead opening next month in conjunction with her current show at the Minnesota Museum of American Art in St. Paul, which is a true must-see.) Because of art-focused institutions like Highpoint – of which there are few in Uptown proper – Lyn-Lake feels more and more like a distinct neighborhood, quite separate from the commerce and apartment-focused area around Hennepin. In fact, I doubt that today I’d include anything in the Lyn-Lake area on a piece about Uptown. 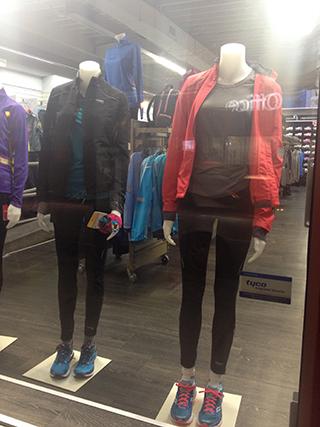 MinnPost photo by Andy Sturdevant
Physical fitness has never been punk rock in any way.

So we return to Uptown proper, and to the American Apparel and Ragstock, also mentioned in that first Stroll. The two stores still sit generally side-by-side on Hennepin, their respective window mannequins locked in a motionless and silent eternal dance-off. However, in the past three years, there’s been an interlocutor. Wedged between the dueling mannequin displays in the windows is now the Running Room. It’s hard to fit the Running Room into a pat narrative about the evolution of Uptown – it’s not really a corporate chain, but a family-owned business, based in Canada, with a few stores in the U.S. And while physical fitness has never been, you know, punk rock in any way, there’s a huge difference between a small retailer of running supplies for committed enthusiasts and, say, a North Face outlet.

And so, if one could perceive the earlier alignment of the two windows – the pansexual corporate nihilism of American Apparel on one side and the scrappy, vintage loopiness of Ragstock on the other – as a physical manifestation of two diametrically opposed cultures battling for the soul of Uptown, the Running Room mannequins, headless and bedecked in stolid, unspectacular shorts and windbreakers, stand in between the two parties as peacekeepers. They’re like U.N. blue helmets in that way, having brokered a truce in this particular war. 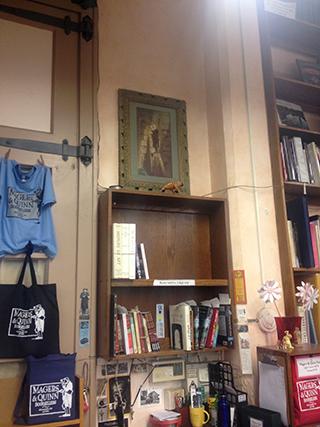 Magers and Quinn, a few blocks away, is reassuringly unchanged – in fact, the Dave Eggers print pointed out in the first column remains in the same place. In the past few years, it’s been joined by a Cheryl Strayed poster, autographed by the former Minnesotan. It’s difficult to imagine Magers and Quinn in any other neighborhood – something about that space, an early 20th-century Chevrolet dealership, is so perfectly suited for the urban fabric around it. Have you ever noticed the rounded open balcony-like element over the front room, upstairs where the offices are located? That’s because it used to be where the Chevy salesmen looked down on the showroom, where the books are sold now. The back part used to be the service garage. That building so splendidly fits into its surroundings, it’s sad to imagine the store in another, less dense neighborhood of the city.

Next to Magers and Quinn, there’s one more semi-recent addition to the neighborhood worth pointing out: a Thai restaurant called Amazing Thailand. It’s a very typical Thai restaurant with a nice bar, but that’s not what makes it noteworthy. It has, in fact, the greatest toilets in the Twin Cities. I know you think Stanley’s in Northeast, with its reclaimed marble giants from the old West Hotel downtown, has the best toilets in Minneapolis, and you have a good point. 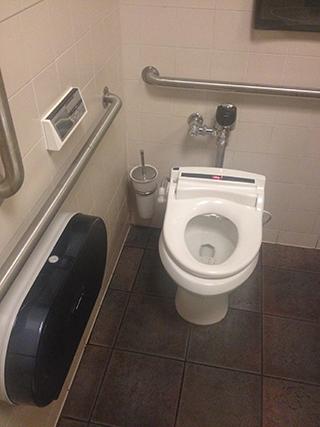 MinnPost photo by Andy Sturdevant
The men’s room toilet at Amazing Thailand is a wonder.

But the men’s room toilet at Amazing Thailand is a wonder. (I’m not sure if the women’s restroom is outfitted with the same.) A Coco 9500R model, manufactured by the forward-thinking engineers of Bio Life Technologies, LLC of Enid, Oklahoma, it’s the only toilet I can think of in town featuring a control console with an option for a bidet, water temperature control, and heated seat. We can argue about Uptown for the next 20 years, but it’s hard to completely write off a neighborhood with such a wondrous semi-public amenity. Uptown’s not as weird as it has been in the past, maybe, but it’s still weird enough.

I’ll be taking February off to finish up a new book project, but you’ll be in good hands. Four great guest Strollers are lined up for the next few weeks: Kevin Ehrman-Solberg, Tam Sopinski Perlman, Jen March and Nekessa Julia Opoti. See you in March!