Minneapolis has always had an uneasy relationship with its underground spaces. Residents embrace the Mill City moniker, but they prefer to limit their celebration to the surface remnants of their industrial heritage. Old mills are developed into condos — the redevelopment of the Pillsbury A-Mill should be finishing up by the time you read this. Or they become history museums — like the Washburn A Mill (Gold Medal Flour).

But few people delve beneath the surface for the actual grit of history. Or in this case, into the thick layer of St. Peter sandstone. It’s the real hero of Minneapolis industrial development. Soft enough that you can dig it with a spoon, yet strong enough to support vast networks of underground infrastructure, the city’s sandstone was the literal bedrock of 19th-century industry.

A short walk along the city’s riverfront quickly reveals relics of our subterranean history. An odd bricked off doorway nestled in a bluff, circular outfalls spewing runoff back into the Mississippi, curious void spaces barely visible behind jumbled piles of foundation stones. These spaces beckon us toward another world deep underneath the city lights.

It is here that our city’s history is buried. Most of these passageways are inaccessible. You can, however, catch a glimpse of these warrens under the Washburn A Mill (now the Mill City Museum). These old tailraces — tunnels that diverted water from the Mississippi to power the mill district — have been unearthed. But even here, the entrances are gated off and dimly lit. The building is the highlight — the tunnels are more of an afterthought. “Look, but not too closely” seems to be message.

On the other side of the river, there is an even lesser-known network of tunnels, caves and tailraces honeycombing the riverfront. From Mill Ruins Park, you can take a short walk across the Stone Arch Bridge to the East Bank. Take an immediate left once you reach the St. Anthony side, and a wooden staircase takes you down to the river. The whole area is bucolic and quintessentially Minnesotan — both urban and natural. But there is more going on than scenic walkways and riverfront vistas. 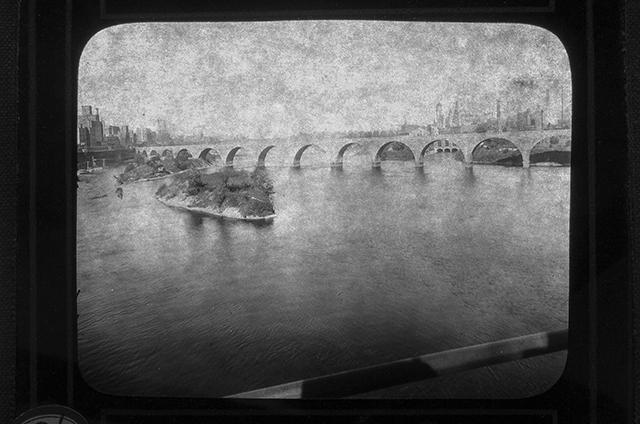 Courtesy of the Minneapolis Tower Archives
A lantern slide of the Stone Arch Bridge as it was 100 years ago. You can see several tailrace openings under the arches.

One of the first things you will notice is what appears to be a tunnel sticking out of the bluff with a metal plate welded over the entrance. My first encounter with this portal left me intrigued. There is no plaque or sign, no explanation for this strange structure. Only recently did I decipher the mystery. This was the gateway into a conduit tunnel that once carried power cables for the city’s streetcar system. If you peer through the small crack between the welded plates, you can still see metal brackets and pieces of cable lining the passageway.

The streetcar tunnel, however, is a side attraction compared to the massive tailraces. The St. Anthony side of the falls, like the Minneapolis side, housed a multitude of lumber and flour mills — all dependent on water power. Heading north, back under the bridge and upriver along the bank, an imposing series of walled-off tunnels begin to dominate the bluff. Unlike the person-height streetcar tunnel, these guys look like you could drive a semi-truck through them.

I first see a pair of industrial-sized tunnels separated by a narrow median. The water flowing through these channels powered the Pillsbury A-Mill. The site is overgrown and eroding, but the huge arched ceilings and limestone block walls still invoke a sense of awe. It is easy to imagine an earlier period, when a roaring cataract kept the Mill District humming. 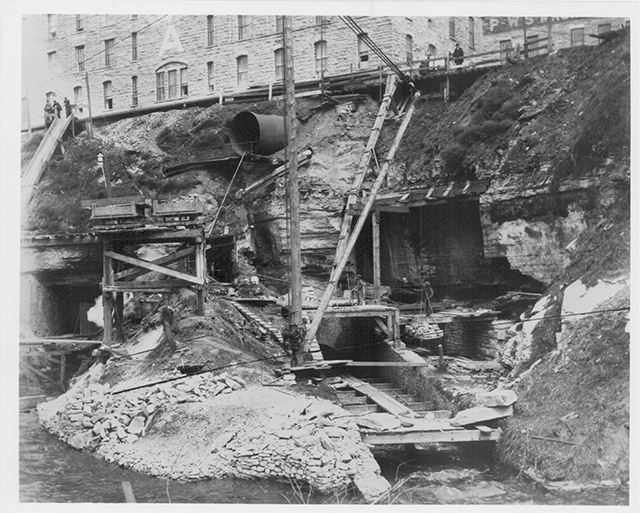 Courtesy of the Minneapolis Tower Archives
Workers excavating the Pillsbury tailraces in the late 1800s.

After reaching the Pillsbury tailraces, go off the path and walk along the base of the bluff. You will encounter a series of small manmade ravines, each with another walled off tunnel at the end.

One of them houses a cave. During the Civil War, the Chute Brothers began digging a tailrace tunnel to power their flour mill. They unexpectedly ran into a natural sandstone cave halfway through their excavation. In true entrepreneurial fashion, the brothers decided to turn it into a tourist attraction. According to a 1876 advertisement, “for the moderate sum of ten cents you can take a seat in a boat, with a flaming torch at the bow, and with a trusty pilot sail up under Main street a distance of 2,000 feet, between walls of pure white sand-stone…It is an inexpensive and decidedly interesting trip to take.”

Those Victorian boat tours are, of course, long gone. You can’t even tell which wall the cave is hiding behind — almost all of the tunnels appear sealed and impassable. Still, there are some intrepid people who seem to know secret ways in. I encountered such a group a couple of summers ago. They were covered in mud and dumping out water from what looked like rain boots. I asked them where they had been.

“We were in the headrace,” one of them cautiously told me.

Intrigued, I asked where that was and how they got in.

“We were in the headrace,” the same one repeated. “And that’s all I am going to tell you.”

After I was done talking to my new acquaintances, another wooden staircase took me up to Main Street. Looping back around to the Stone Arch Bridge, I noticed a small placard by the pavilion in the park area on top of the bluff. It was a description of the headrace the muddy explorers had just been in. The headrace runs under Main Street, according to the plaque, and carried water from above the Falls of St. Anthony to a drop shaft that emptied out in the first tunnel system that I saw. The drop shaft housed a water turbine that was the largest in the world when it was installed in the late 19th century. It’s no longer in operation; click here to see this industrial marvel re-created in CGI.

Today, we think of St. Anthony Falls as a natural treasure. The builders and business leaders of early Minneapolis, however, saw this cataract as a huge power plant. It is a different way of viewing the river. But dig beneath the surface (or walk along the banks), and you can still catch a of glimpse of their vision lurking quietly in the darkness.

Kevin Ehrman-Solberg recently graduated from Augsburg College with degrees in English and history. He works for the Historyapolis Project, conducting research on the history of Minneapolis’ underground infrastructure, and is particularly interested in using GIS to construct historical narratives.

Andy Sturdevant is off this month; Kevin is the first of several guest Stroll writers.