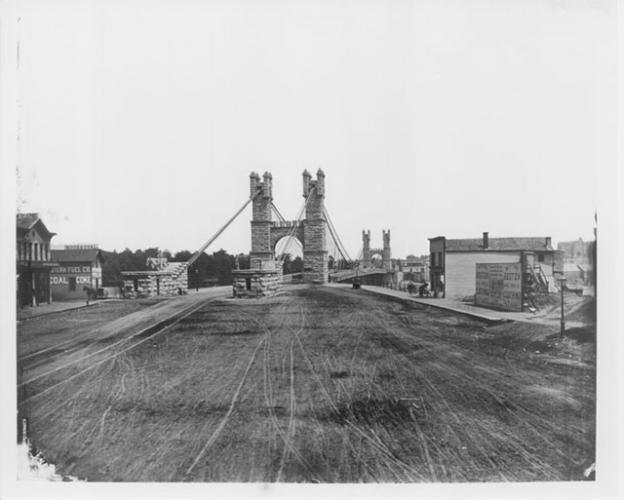 Courtesy of the James K. Hosmer Special Collections, Hennepin County Library
The suspension bridge shortly after its completion in 1877. The view is from Bridge Square.

I have been spending an absurd amount of time with a young woman named Kate Noonan. I relive the same day — Feb. 16, 1877 — over and over, following her as she wanders up and down Nicollet Avenue. It’s like Groundhog Day; only the outcome never changes, it just becomes more minutely detailed every time I retrace the path with her. You may have heard parts of Kate’s story before. I’ve been researching it, examining how her crime affected a town growing into a legitimate city. Because the city is as much of a part of the story as she is.

Kate is Irish Catholic, 24 years old. She is a live-in maid, and has been doing the job well for almost 10 years. She is described as pretty with a sense of humor, but also as an excellent employee. Unfortunately, she fell in love with a banker’s son, and as you might suspect, it hasn’t ended well. William is set to marry someone else, a woman of his own class. She’s been cast aside and the stress and guilt of being a “ruined woman” have worn her down. By the end of the day, she will have turned herself into police and her lover will be dead.

As I follow her, I still fall into the trap of thinking of the past as quiet and proper. I have to move myself away from that assumption and immerse myself into a city filled with noise and people and movement. Minneapolis was a hub of activity in 1877. Despite the fact that the United States had been mired in a horrible depression since 1873, Minneapolis had been experiencing a growth spurt. The city’s lumber mills and flourmills cushioned some of the financial devastation other cities were facing. Maturing from a frontier town of 4,000 to an industrialized city nearing 46,000 residents with thriving businesses and homes kept the landscape in a constant state of transition. Powered by the rushing falls, saws buzzed day and night at the mills, horses clattered up and down the streets, revelers drank at the 175 listed saloons. 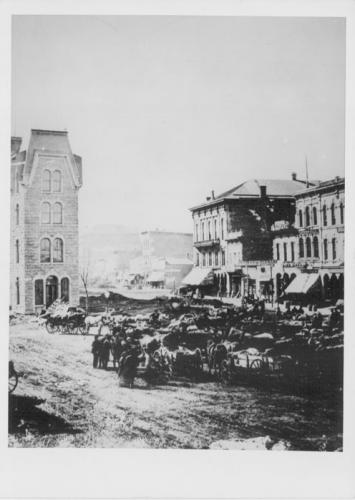 Friday, Feb. 16, 1877, is uncommonly warm, and in true Minnesota style people are freaking out. Someone is trying to set the day to music with a broken hand organ. Others give into spring fever by clearing gardens. Hardware store owners George Farwell and Adam Decker happily sell wood and paint to handymen. Doors are flung open and shoppers sun themselves outside the shops on Nicollet Avenue. Mrs. Jackson waves to Kate from her buggy. All day Kate walks up and down Nicollet, occasionally circling Bridge Square, where Nicollet collides with Hennepin and Washington Avenues.

The suspension bridge, which on a normal day would feed foot traffic and horse carts into Bridge Square, is being rebuilt. Workers lay track down the center of the span for the streetcars that Minneapolitans had begun to rely on. Like any public transport, the cars are covered with ads. This week, they hold “excellent steel engravings” of Henry Ward Beecher, who is coming to speak at the new Plymouth Congregational Church over on 8th and Nicollet. Its looming steeple and rosette stained glass window dominate the secular businesses around it. Inside, the vaulted ceiling is filled with hammering as pews are added into every nook and cranny to hold the capacity-plus crowds for the event. 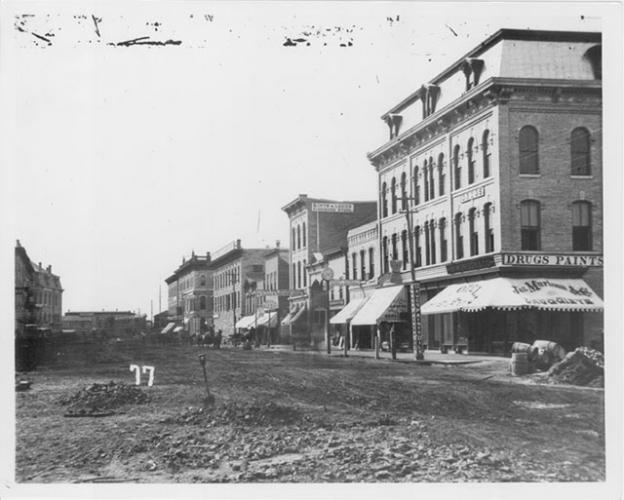 Kate is not interested in Beecher. She is not interested in much that is going on around her at all. Rather, she wanders in an aimless manner, her eyes searching and seeming to barely register anything. People talk about her as she passes, but no one stops her. Some say she’ll end up in the asylum in St. Peter. Others try to minimize their interactions.

Kate seems to focus on the Nicollet Hotel. The cream brick building sits on a corner of Washington Avenue, anchoring the connection between Hennepin and Nicollet (the same spot slated for the Gateway project’s 36-story Canopy by Hilton). Built in 1858, the Nicollet was the statuesque constant in the cloud of dusty activity that surrounded it. 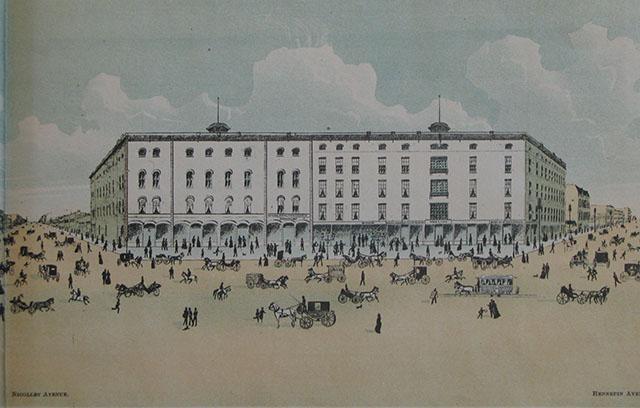 Courtesy of The Historyapolis Project
The Nicollet Hotel in 1882 from “The Business Heart of Minneapolis,” a panoramic book promoting Minneapolis.

Nicollet Avenue, the main business district, seems to change every day. The Coal Gas Company is about to install gas lamps along the stretch for just $30 a pole. Wooden boardwalks elevate ladies from the busy roads full of horse, cart and trolley traffic. A raised wooden median gives policemen an advantageous view of the goings-on. Usually, at this time of year, the roads would have been a nightmare of frozen ruts and custard-like mud. However, the nice weather has completely dried the streets out, leaving them “as smooth as a floor” and kicking up so much dust, they would benefit from a passing of the sprinkler carts.

The house she’s looking for

As evening falls, Kate meanders around barrels, hay and advertising signs on the boardwalk. She passes John Bradstreet’s furniture store at 411 Nicollet Avenue — just one block west of the current Minneapolis Central Library — from where he will slowly transform the look of wealth in Minneapolis over the next decades. Finally, in what would be considered the “mansion district,” she finds what she is looking for. At the corner of Fifth Street she leans against the wrought-iron pole of a gas lamp.

The brick home that had caught her attention fronts Nicollet Avenue and runs half the length of Fifth Street. Two stories high, it had a large attic topped by a mansard roof and elaborate cornices. The fenced yard holds a few young trees, now not more than large bare branches sticking up from the newly thawed earth. In the summer a three-tier fountain flows in the shade of a garden. Henry G. Sidle Sr. built this massive house just blocks north of The First National Bank that he and his brother Jacob own. From here, the Sidles are close to downtown’s business hub and a few more still from the bars and brothels near First Street and Second Avenue. 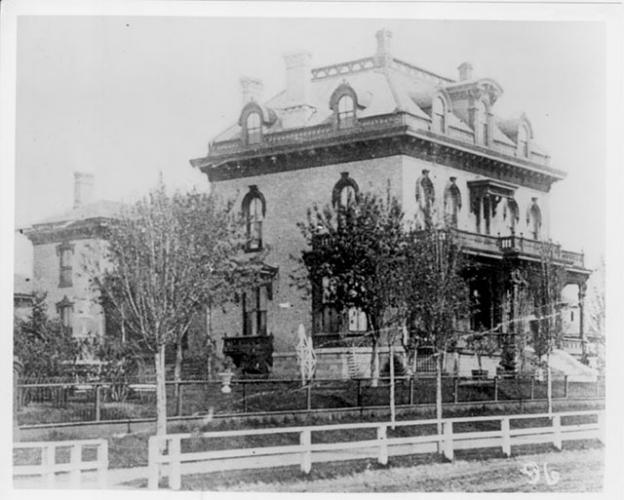 Courtesy of the James K. Hosmer Special Collections, Hennepin County Library
The Sidle house on the corner of 5th and Nicollet, 1874.

Kate watches William and Henry Sidle Jr. step out the door of their family’s mansion around 6:30 that evening. William, at 24, is already a well-respected assistant cashier with eight years of experience under his belt. He is handsome and fit and wears the requisite moustache turned up slightly at the ends in waxed curls. Kate begins to follow the men.

Frankly, things go downhill from here. William won’t make it through the night. But, I’ll start again tomorrow, following Kate from her employer’s house in St. Anthony, across the river, up Nicollet and through the days surrounding Feb. 16, 1877. Discovering the sights, sounds and people of Minneapolis as they cross paths with this young woman heading to disaster.

Tamatha Perlman is a writer and museum consultant. She is currently working on a book about murder, madness and unrequited love in 19th-century Minneapolis.

Andy Sturdevant is off this month; Tamatha is the second of several guest Stroll writers.