Here’s a fun real-estate game: Go on the Craigslist housing rental listings for Minneapolis, and see how far east you can find the definition of “Uptown” pushed. As of early this week, there was a listing for an “Uptown duplex, 6 bedrooms and granite countertops!!!” as far east as Blaisdell Avenue, which is pretty good, though the undisputed champion at the moment is the “Uptown condo” listed at Stevens and 24th. On some weeks, you can find the definition of Uptown stretched right up to the I-35W sound wall. It’s a miracle of scrupulousness (or a failure of imagination) that some enterprising developer hasn’t discovered a mythical “Uptown East,” a real-estate fever dream that could encompass any neighborhood in Minneapolis south of downtown and west of the Mississippi River. Everyone wants to live in Uptown.

Making a claim to Uptown status is a gimmick, perhaps, a way of standing out. But Whittier isn’t Uptown. It’s got its own character. There’s a very large quantity of apartment buildings located on the nonsequential, non-numerical avenues between Lyndale and Nicollet; it’s one of the city’s only true apartment districts. A walk through the neighborhood reveals “For Rent” signs on nearly every block. They’re posted on all kinds of apartment buildings, dating usually to one of three booms is Twin Cities apartment construction: the 1920s, the late 1950s and early 1960s, and the early 21st century.

We know what those earliest apartment buildings are like. Those are the dark brick three-story structures with fancy names over the front door and courtyards or airshafts in the middle you find north of Lake along Grand and Pleasant. The newer ones, too, especially along the Midtown Greenway, have a consistent aesthetic, with box-like balconies and corrugated steel panels. There are, however, a great many from the 1950s and 1960s, usually less loved than their older counterparts but interesting in their own way. Especially when they make their own peculiar stabs at urbanity and pizzazz.

Along 28th Street, for example, you come across at least three apartment buildings of this era that are pretty distinct from anything else around – they stick out boldly from the boxy, stuccoed profiles of their contemporaries unlike anything else. At least, they stick out in terms of one specific aesthetic decision.

The most notable of these is at 601 West 28th Street, on the southwest corner of Garfield. You may have seen it on your righthand side as you speed east on the one-way from Uptown toward Nicollet. It’s a very straightforward modernist block apartment, with a glass-enclosed three-story lobby entrance, the sort you find all over the Twin Cities. The back is, like many of these buildings, stucco. The street-facing sides, however, deliver a surprise. 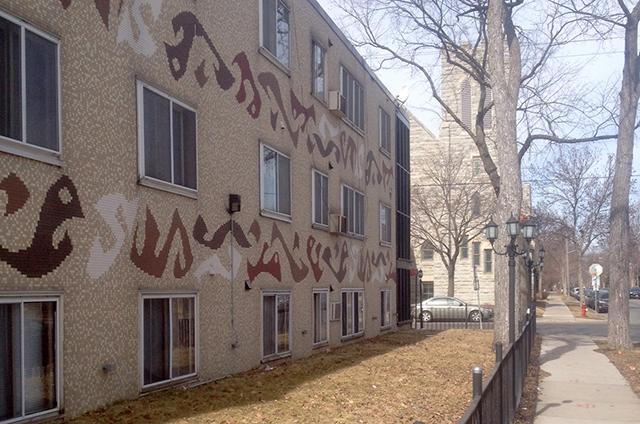 Though the color palette is as beige as any given South Minneapolis apartment building, each side has a strange and remarkable mosaic pattern, made up of what looks like glazed 1” x 1” tiles. White, brown and rust-colored organic shapes, a little bit like abstracted waves or cuneiforms, dance across the surface, alternating color. They’re Googie shapes – the sort of boomerang-like forms you’d see repeated on the Formica countertop of 1950s California hamburger stand, or the cover of some long-forgotten jazz instrumental record. Beige jazz! Looking closely at the building, you can find areas where the tile has chipped away or cracked. These are filled in by a rainbow-colored assortment of replacement tiles, tracing cracks along the surface. 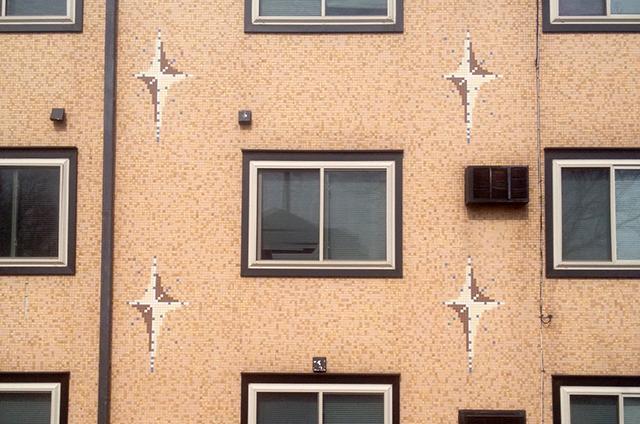 MinnPost photo by Andy Sturdevant
The stars are white and brown, with shimmering blue sparkles surrounding them. It looks a lot like the NATO logo. Perhaps it’s a North Star. 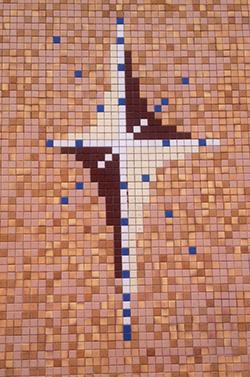 A block away, on the northeast corner of Harriet at 500 W. 28th Street, there’s an apartment with another mosaic façade. The building itself is almost identical to the first, down to the same glass lobby entrance, but the street-facing parts are also covered with brown and beige tiles. Every few feet, there is a shape that looks like a pixelated compass rose or what’s called a star gyronny in heraldry, that three-dimensional effect made by contrasting and alternating white and dark colors. The stars are white and brown, with shimmering blue sparkles surrounding them. It looks a lot like the NATO logo. Perhaps it’s a North Star.

I walked around the whole neighborhood for about an hour, and failed to find anything similar. On 28th and Pillsbury, there’s another building of this era, constructed from brick but with tile mosaic patterns between each floor in the shape of a white diamond on a gold field. But that’s about it. The dancing shapes and the star apartments both date to 1960 and 1961. The one on Pillsbury with the diamonds is a year older, built in 1959. 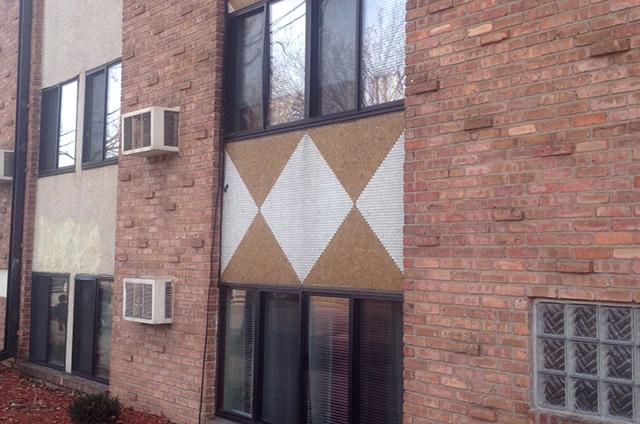 MinnPost photo by Andy Sturdevant
On 28th and Pillsbury, there’s another building of this era, constructed from brick but with tile mosaic patterns between each floor in the shape of a white diamond on a gold field.

Who’s responsible for these mosaic enhancements? My best guess –and it is just a guess – would be two Minneapolis building contractors, Lawrence H. Milliman and Syd Larson, the vice president and president/manager, respectively, of Milliman & Larson, Inc. The building permits for two of these three buildings were contracted for construction to Milliman & Larson, within the space of two years. The firm seem to have been a very small operation, responsible for a few other less distinctive apartment buildings in the immediate area, and disappearing from the city directory by 1966 (though Lawrence seems to have gone on to found a construction firm with his son). The contractor for the most interesting of these apartments, the one on Garfield with the geometric shapes, is listed on the permit as D.W. Olin. However, Milliman & Larson couldn’t have been too far away from the scene, since the 1961 city directory lists their headquarters as being – you guessed it – at 601 W. 28th Street, Unit  No. 2, right in that same building.

The late 1950s was a great time to be in the apartment construction business. By 1958, there was a boom in new mult-family dwelling construction in residential parts of the core cities. “For rent signs are cropping up in nearly every section of Minneapolis,” reported the Tribune in 1958. A few months later, another article on the boom revealed this impressive figure: “As late as 1954, 84 percent of the building permits issued in the city were for single-family homes. Only 6 percent were for buildings with three or more family units. By 1958 only 11 percent were for one-family units. Multi-family apartments account for 77 percent.” An almost complete reversal, in less than five years. It’s during this period that quite a few of the midcentury apartment buildings in and around Whittier and Lyndale went up. The city was preparing for a coming explosion of young renters. These are apartments you yourself may have rented in the past, or currently rent, an uncelebrated but essential part of the architectural landscape: the stucco boxes, the geometric brick patterns, the airy, glass box entrance foyers, the weird retro Tudor-style and quasi-Georgian embellishments, the uniformly below-the-window air conditioning units. And, of course, these tilework facades.

In the listings of the Northwest Architecture Archive, I found another reference to a Milliman & Larson apartment building a little further afield from 28th Street, near Franklin on 21st Avenue in Seward. I was curious to see if it fit the profile of these others, and so I pulled up the image on Google Maps. It did: an apartment building, practically identical to the others, with a mosaic façade, this one depicting a repeating red and white geometric Space Age motif. It was built in 1962. 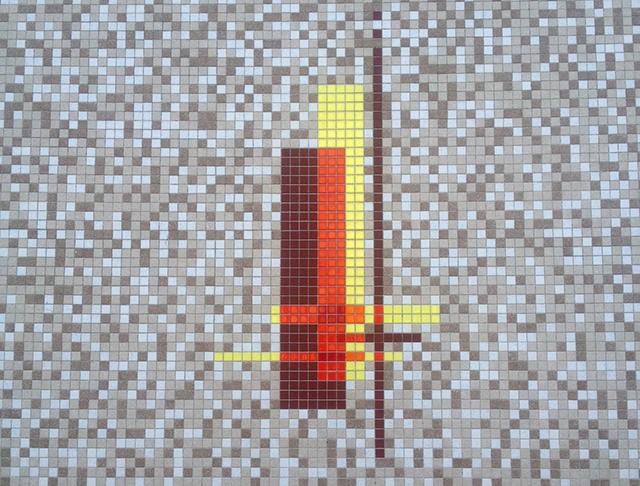 The apartment boom petered out by the middle of the 1960s. No more of these tiled stuctures followed, at least as far as I can tell. Whether or not Milliman & Larson had a grand plan for kick-starting a new Midwestern apartment design revolution by erecting more of these patterned mosaic-enhanced structures, I can’t say. I can’t say for certain if they’re the responsible parties at all, as likely as it seems. Milliman appears to have died in 1994 at the age of 70. If you can shed any light on this, I welcome your contributions in the comments below.

All the same, there’s something bold and appealing about these designs, especially considering how modest their origins are. These mosaic facades are clearly something that, to the people who created it, must have appeared the heights of stylishness and modernity. Perhaps to the people who lived in the buildings, too. The relative wildness of the designs – wild, that is to say, by the sedate standards of Midwestern apartment building architectural practices of the Kennedy years – are charmingly offset by the full-on beige concessions to contemporary tastefulness. It stands out, but not too much. They’re such perfect expressions of the period, embodying a desire to color within the lines, but also to try something fairly unorthodox and see what happens. Walking around the residential parts of the city, I wish there were more of them.