There are certain places you want to visit just because of the name. Purgatory Park, near Excelsior Boulevard and Highway 101 in Minnetonka, is one of these places. There are a lot of reasons to visit the very lovely Purgatory Park, but the name is, at least for me, principal among them.

It conjures up visions of Sister Teresa’s theology class and quality time spent with Dante’s “Divine Comedy.” Outside the front entrance of Purgatory Park is maybe one of the great signage oddities in the Twin Cities. “Purgatory,” it reads on a plank of brown-painted wood. Underneath, to clarify the situation somewhat, a second plank reads “Minnetonka Parks.” As if Virgil is your waiting park ranger. 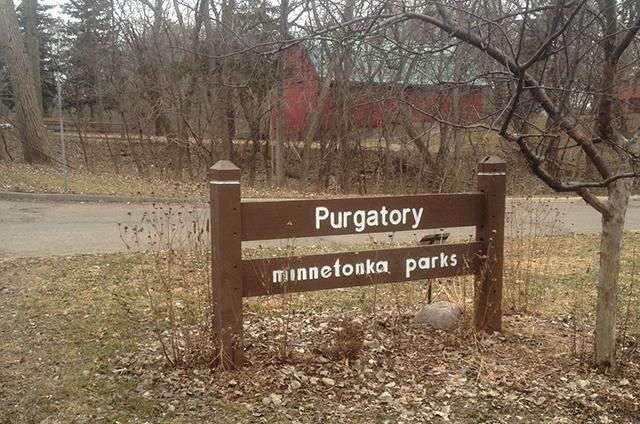 In the west metro, it’s one of those names that has become so familiar that it’s lost a lot of its strangeness. At 155 acres, Purgatory is the largest park in Minnetonka, and even on a quiet and chilly Sunday afternoon, it’s clear that it’s one of the primary social hubs of the surrounding suburbs. On the mile-plus loop around the park, I encounter everything from off-leash dog walking to foraging to fitness regimens to post-brunch dates. A friend who grew up in Minnetonka describes a full range of activity in the park during her youth, running the gamut from teenage parking lot make-out sessions to family Christmas card photos on one of the wooden bridges. Christmas in Purgatory, making out in Purgatory. Both are so loaded with potential symbolism.

Purgatory Park is named for Purgatory Creek, a 16-mile body of water that runs through the park, as well as 26 other parks in Minnetonka, Chanhassen and Eden Prairie. Purgatory Creek has a few branches, beginning in nearby Lotus Lake, Silver Lake and a wetland complex, and then draining into the Mississippi River basin. 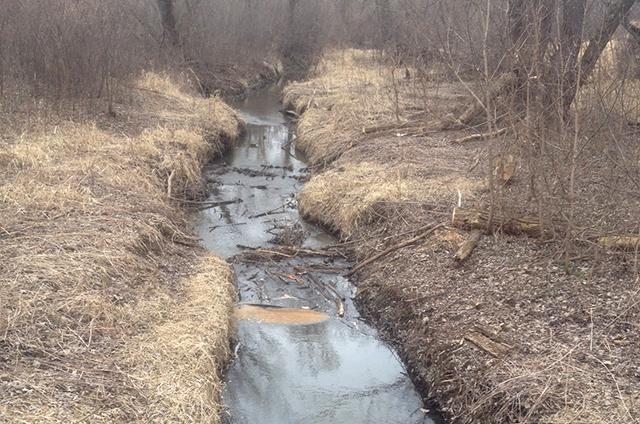 The name “Purgatory Creek” is one gouache painting of a cowboy on horseback away from being a Louis L’Amour novel. “Purgatory Park” actually strikes me as something closer to a Hold Steady song. Where on earth did these names come from? Odd place names like this tend to be obscured by history. Fortunately, this is not so in Purgatory Park’s case. We have a written record of the moment it was named.

In 1914, a group of women in Austin, Minnesota, led by Lucy Leavenworth Wilder Morris and affiliated with a local chapter of the Daughters of the American Revolution, assembled a comprehensive oral history of the early white settlement of the state. The book was entitled “Old Fence Rail Corners: The A.B.C.’s of Minnesota History: Authentic Incidents Gleaned from the Old Settlers by the Book Committee.” In it, dozens of men and women born in the early 19th century and mostly in their 80s and 90s recounted their experiences in Minnesota in the 1840s and ’50s.

In this book, Mrs. Anna Simmons Apgar of Excelsior, who arrived in Minnesota from New England in 1854, tells the following story:

When our six families got to the springs near Excelsior it was near dark and we struck the worst road we had found in the swampy land by it. The mosquitoes were dreadful, too. How dreadful, no one today can ever believe. One of the tiredout men said, ‘This is Hell!’ ‘No,” said another, ‘Not Hell, but Purgatory.’ The spring took its name from that.

This account deserves some unpacking. What did the other tiredout man mean, exactly, when he shouted “Not Hell, but Purgatory”? What was his understanding of Purgatory?

In case you were not in Sister Teresa’s theology class, purgatory is the intermediary state in Catholic teachings wherein – as the Baltimore Catechism put it – “those suffer for a time who die guilty of venial sins, or without having satisfied for the punishment due to their sins. …This state is called Purgatory because in it the souls are purged or purified from all their stains; and it is not, therefore, a permanent or lasting state for the soul.”

So, in dubbing the creek “purgatory,” did the tired out, mosquito-plagued man mean, “Hey, gang, this seems terrible right now, but we’re bound for heaven so hang in there”? Or was he playing a classic, macho game of one-upmanship, and throwing out the only metaphysical state he could think of that seemed like it might be worse than Hell?

I have no definite way of knowing, but my guess is that settlers from New England with names like Simmons and Apgar were probably not Catholic. Like most Eastern settlers of that time, they were probably Protestants, or Episcopalians, both of whom reject the doctrine of purgatory. The Minnetonka city website recounts Anna’s story in somewhat different language: “One of the settlers remarked, ‘This is hell!’ ‘No, it’s even worse,’ another replied, ‘It’s purgatory!’ ” The addition of the modifier “worse” would seem to suggest the second theory: It’s one-upmanship, a description of a place that seems even more terrible than hell. Anna’s own description of the scene later emphasizes the awfulness: “Has anyone ever told you how terrible the mosquitoes were in the early days? Think of the worst experience you ever had with them and then add a million for each one and you will have some idea.” You can barely fault the settlers for reaching for a word that describes the terror and hardship of the situation in spirit, if not in precise doctrinal clarity.

There’s something to be said for the other theory, however; an understanding of the scene that is much more optimistic. Perhaps the settler did have a clear understanding of Catholic theology. He was positing that, though they were enduring the physical pain of the senses through mosquito bites and dire swamps, it is not a permanent or lasting state. The reward at the end, as a result of this physical mortification, is the reward of a new home. Is this heaven? No, it’s Excelsior.

Which was it? Metaphysical despair or statement of hopefulness? We’ll never know. All we have to go on is the written account of a woman who has been dead for a century.

I’ve written barely a word yet about the park itself. It’s a good-sized, active and well-used by the people of the west metro, large enough to include prairie, woodlands and wetlands in a fairly compact space. There’s a loop that encircles a batch of native prairie, in the middle of a long restoration process – turning the farmland back into prairie, and eliminating invasive species like the buckthorn that choke out the native oaks, maples and basswoods in the woodland areas. The controlled burns used in this management must impart a very purgatory-like image to the area. If anything, this part of the park feels like it could be further outside the metro than it is, though it is neatly hemmed in around the perimeters by residential developments. Purgatory Creek cuts through the southern edge, looking most picturesque, like a tortured relation of its more famous cousin, Minnehaha. Purgatory Creek was once considered by the Twin Citians looking out the windows of the streetcars traveling to and from Excelsior – a concrete embankment that once carried the rail line over the ridge still remains by the front entrance to the park. 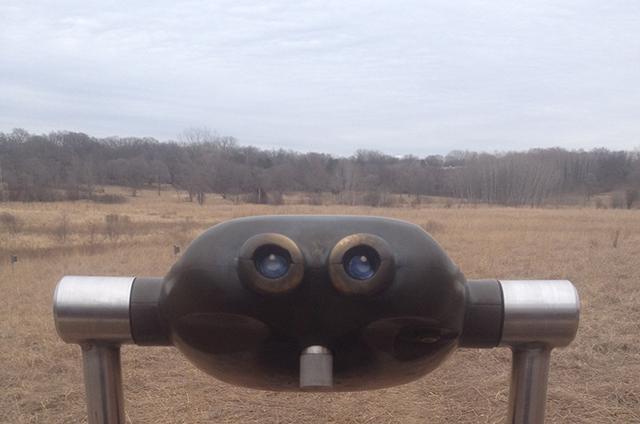 MinnPost photo by Andy Sturdevant
The park is good-sized, active and well-used by the people of the west metro, large enough to include prairie, woodlands and wetlands in a fairly compact space.

The park has a lot to recommend it. But, as noted, maybe the best aspect is the opportunity to discuss 19th-century frontier Protestants’ understanding of Catholic theology while walking your dog or having a family photo taken on a wooden bridge. Only in Purgatory is such a thing possible.