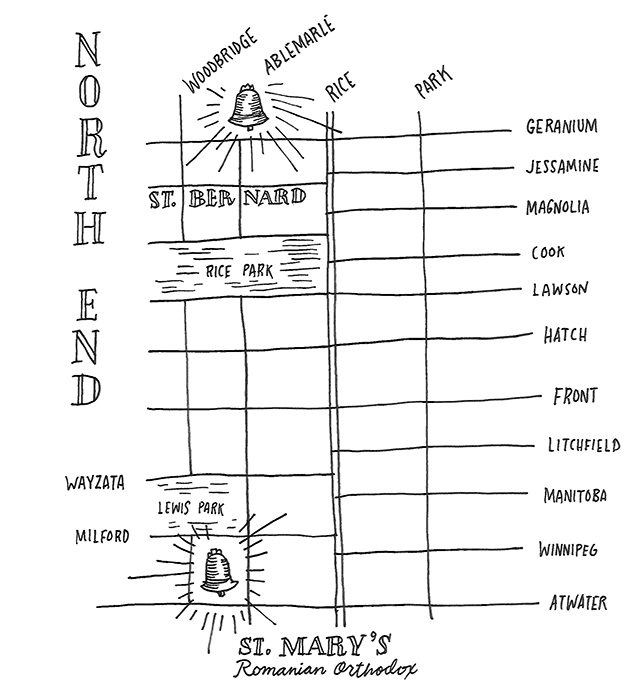 MinnPost illustration by Andy Sturdevant
Walking through a neighborhood like the North End, you can begin to understand that classic quip about St. Paul – if you ask a native where he or she grew up in the city, you’re as likely to hear the name of a parish as you are the name of an official District Council neighborhood.

If you begin walking north on Rice Street in St. Paul on a Sunday morning at about 10 a.m. from Atwater Avenue to Geranium Avenue, your walk is likely to begin and end with church bells. At 10 a.m., the bells ring from under the onion dome of St. Mary Orthodox Romanian Church at Woodbridge and Atwater, signaling the beginning of the Divine Liturgy there. If you take your time to admire the neon bar signs and storefronts on Rice, or stop into Unity Cafe for a coffee, a half-hour later you’ll be within a block of the Church of St. Bernard at Ablemarle and Geranium. The church bells will ring from high atop twin spires to signal the beginning of the 10:30 a.m. Mass.

Walking through a neighborhood like the North End, you can begin to understand that classic quip about St. Paul – if you ask a native where he or she grew up in the city, you’re as likely to hear the name of a parish as you are the name of an official District Council neighborhood, even if your interlocutor isn’t Catholic. The church’s influence on the way the city is laid out, the way those 15 neighborhoods are stitched together, is not just cultural or economic or spiritual, but physically visible. On a Sunday morning, with St. Bernard’s bells echoing over the roofs on little residential streets like Matilda, Front, Topping and Jessamine, it’s also audible. The sounds of those bells create the shape of the neighborhood. Just like Cockneys of London and the Bow Bells of St. Mary-le-Bow: If you’re born within the sound of the bells of St. Bernard’s, you’re a North Ender.

Rice Street is one of the great commercial corridors in the Twin Cities, home to wave after wave of immigrant groups since the 19th century who’ve mostly owned and operated the small businesses along the strip. Early on were Central and Eastern Europeans – Germans, Austrians, Austro-Hungarians, Romanians – giving way to Poles and Italians, and then to Hmong, Karen and Lao. Latinos and African-Americans have made their homes in small pockets along the avenue, as well. Walking along Rice, you can see this texture along the storefronts, in the way the Mitteleuropa influences remain – the street is anchored by the Klub Haus, a former German-American improvement club turned neighborhood center and wedding venue – and how they mingle with structures and signage added by Asian-Americans in the past few decades.

Rice is pretty well preserved, in the way a neighborhood that has neither been particularly trendy nor particularly impoverished usually is, and consequently is still home to a lot of commercial structures that no one’s messed with too much. At this time of year, the Catholic influence is pervasive in the many, many Friday fish fry opportunities one has throughout the Lenten season in the many lodges, bars and restaurants along Rice. On Sunday, I counted at least four between Maryland and Sycamore.

Many of those North End immigrant groups, of course, have been Catholic. This is true among Asian immigrant groups, as well. The Hmong-American National Catholic Association estimates about 10 percent of the U.S. Hmong population are Roman Catholic. There is also a sizable percentage of Catholics among the Karen, too. It’s fair to say that, at least initially, it was Roman Catholics who populated the North End. At the beginning of the area’s white settlement, it was a sparsely populated part of the city, a country road north of downtown leading out to the sticks. Villagers from a German-speaking enclave of Hungary established St. Bernard’s parish in a rented house in 1890, and St. Bernard’s church and school was built in 1905 and 1906. Small houses full of growing families and commercial businesses to serve them followed suit. In only about 30 years time, there had been enough of a population boom among North Enders to enroll 1,280 elementary school students at St. Bernard’s – supposedly it was the largest grade school west of Chicago at the time, according to one recent history of the area. The school closed in 2010 for, of all things, low enrollment. 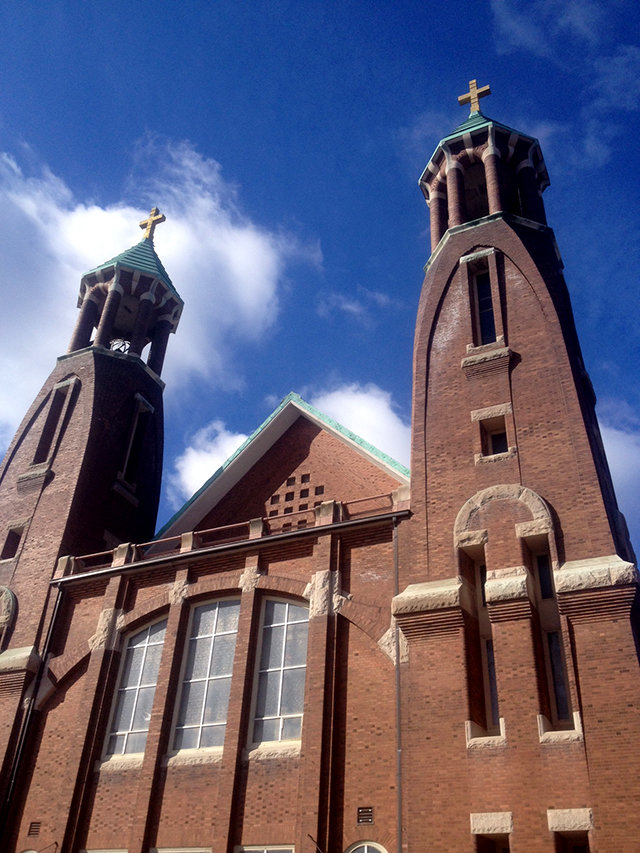 MinnPost photo by Andy Sturdevant
If you’re born within the sound of the Church of St. Bernard’s bells, you’re a North Ender.

St. Bernard’s is one of the architectural marvels of the Twin Cities. There is no shortage of remarkable churches in St. Paul, but this one is in a class by itself. It is at once emphatically a product of the Old World, like something you might encounter on a street corner in Vienna, as well as seeming modern and American, with art nouveau touches placing it squarely in the early 20th century. The cornerstone on the south corner proclaims “1905” in a flourish that wouldn’t look out of place in the corner of an artwork by one of the Vienna Secessionists. 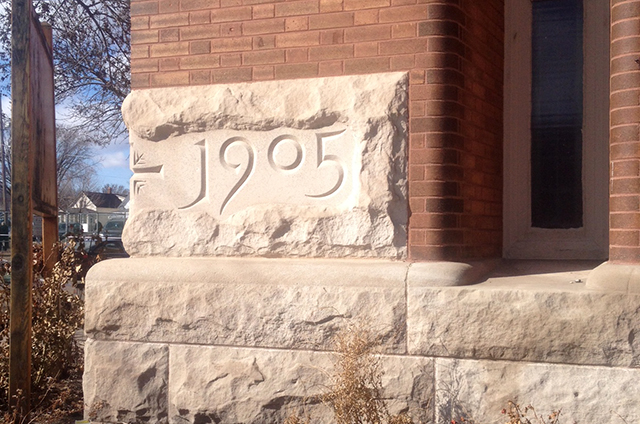 MinnPost photo by Andy Sturdevant
The cornerstone on the south corner of St. Bernard’s proclaims “1905” in a flourish that wouldn’t look out of place in the corner of an artwork by one of the Vienna Secessionists.

The architect responsible, John Jager, was born in present-day Slovenia and trained in Vienna. He had lived in Minneapolis since 1903 and had absorbed the tenets of the native Prairie School while in the Midwest. He was responsible for a few other structures and residential streetscapes around the state, but nothing even close to this. The way those two towers shoot up in the air, tapering off toward the top, is so elegant and streamlined. The brickwork is beautiful, and even more so is the rough, broken-off surface of the granite highlights along the windows and edges. It’s practically avant-garde for the time, but it was instantly beloved by the Germans and Austrians of the parish.

It wasn’t all about purely aesthetic flourishes. Using concrete supports, Jager was able to construct the interior as one unbroken vault independent of the shape of the outside, giving the sanctuary a feeling of open space not always found in ecclesiastical architecture. Churches of the premodern era are usually dependent on the shape of the structure and the visible supporting elements. That creates a lot of cloisters, nooks and alcoves, none of which are really a part of this building’s early modernist airiness. St. Bernard’s has two Sunday Masses, and the later one, at 10:30, is led by Father Joseph Kureh, who has led the Karenni ministry since 2013. 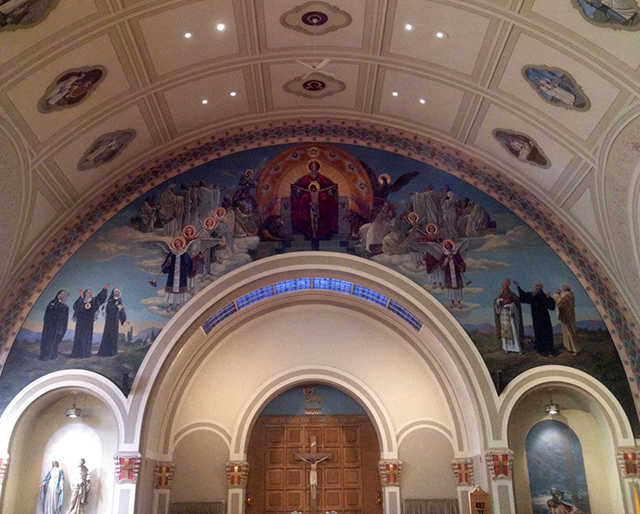 MinnPost photo by Andy Sturdevant
The interior of the Church of St. Bernard: The sanctuary has a feeling of open space not always found in ecclesiastical architecture.

The Karen are a diverse ethnic group native to southern Burma (known as Myanmar since 1989), consisting of several subgroups, many of whom have been engaged in a decades-long insurgency against the ruling military dictatorship and subject to persecution that has forced large numbers into refugee camps in neighboring Thailand. St. Paul currently has the largest number of Karen refugees in the United States, and Karen immigrants constitute a large portion of St. Bernard’s parishioners. The vast majority of the attendees of the 10:30 Mass are Karen. The service is in English, except for the traditional Sanctus hymn, which is in Karenni (“Sa Se”). There are, in fact, many more young people than I might have expected to see – kids, teenagers, young adults, all mixed in with older parishioners. The altar servers are two young Karen women. 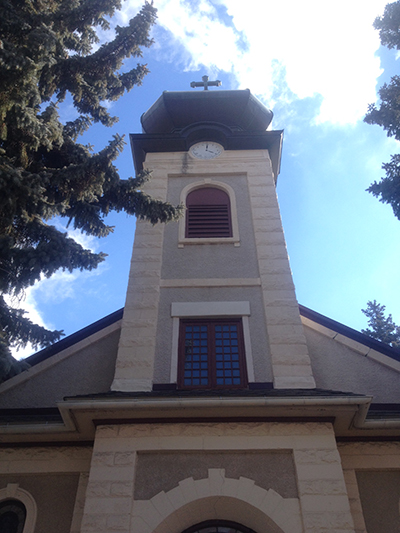 MinnPost photo by Andy Sturdevant
Under the St. Mary onion dome, there appears to be a clock on each of the four sides.

After Mass at St. Bernard’s, you can walk back down Rice to where you began, at St. Mary’s. As in Europe, different nationalities and ethnic groups lived in the same neighborhoods and brought their cultural and religious traditions with them. The Romanians who settled the area were Orthodox, and St. Mary was the first Romanian Orthodox church in the state.

The church, 100 years old last year, certainly has one of the most beautiful and distinctive proper names of any institution in the city: the Falling Asleep of the Ever-Virgin Mary Church. Mary, you may recall if you are Orthodox or Eastern Catholic, is said to have “fallen asleep” in death before her resurrection, an event marked by the Orthodox Church as the Dormition.

The building also has a famously distinctive feature that, over the decades, has become one of the favorite neighborhood mysteries of the North End. Under the onion dome, there appears to be a clock on each of the four sides. Upon closer inspection, it’s not a functioning clock at all, but a painting of a clock. The hands read 4 o’clock. Why this eternal 4? No one seems to know. Architectural historian Larry Millett believes that was the time of the first service. Others have posited it references the Four Evangelists. Timing was clearly on their minds: In 1914, the Romanian Orthodox Church was newly established, only recognized by Constantinople 30 years earlier (modern Romania itself was only established in 1859). Maybe it means it was early morning for the Romanian Orthodox Church, the hour just before a beautiful dawn. Or maybe that’s going a little overboard on the interpretation end of things. 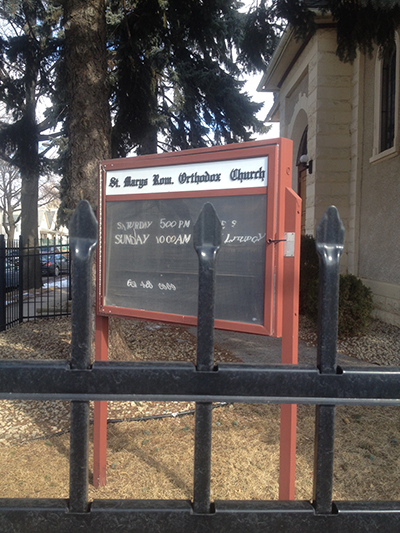 MinnPost photo by Andy Sturdevant
The Romanian-born population of the Twin Cities is small today, especially
compared to that of some of its European neighbors.

The Romanian-born population of the Twin Cities is small today, especially compared to that of some of its European neighbors – about 5,000 in the Twin Cities, according to the Star Tribune in 2013. The congregation abides, however. There’s a sign over the handle on the door in Romanian: “Apăsati mai taŕe, pentru a deschide” – “press harder to open.” (I looked up the translation later, but I figured as much.) I press hard on the handle, and tiptoe inside. The sanctuary is small, just a large room, but beautifully decorated and painted, and full of worshippers. The congregation is finishing up the 10 a.m. Divine Liturgy. I don’t want to intrude, but I can quietly inspect the guest book in the front lobby – the oldest signature in the front dates back to 1951. I am not certain if what I’m hearing in the service is Latin or Romanian. Romanian, it’s often said, is the Romance language closest to the way the vernacular Latin of the Romans sounded. 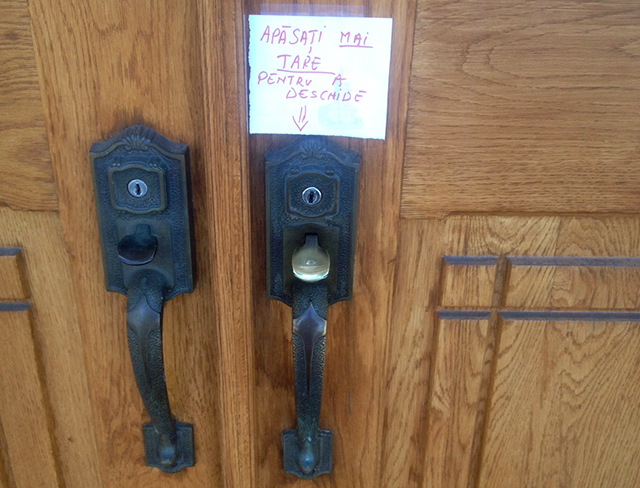 No bells on the way out, but the sounds of the service waft out the door. The onion dome peeks over the tree line from Rice Street. The spires of St. Bernard are visible in the distance. On the way back, I pass a grocery store on Rice that claims to be the first such Karen grocery in the state.

Immigrants populated, created and maintained the neighborhood, and the institutions they’ve built define the shape and textures of that neighborhood still.