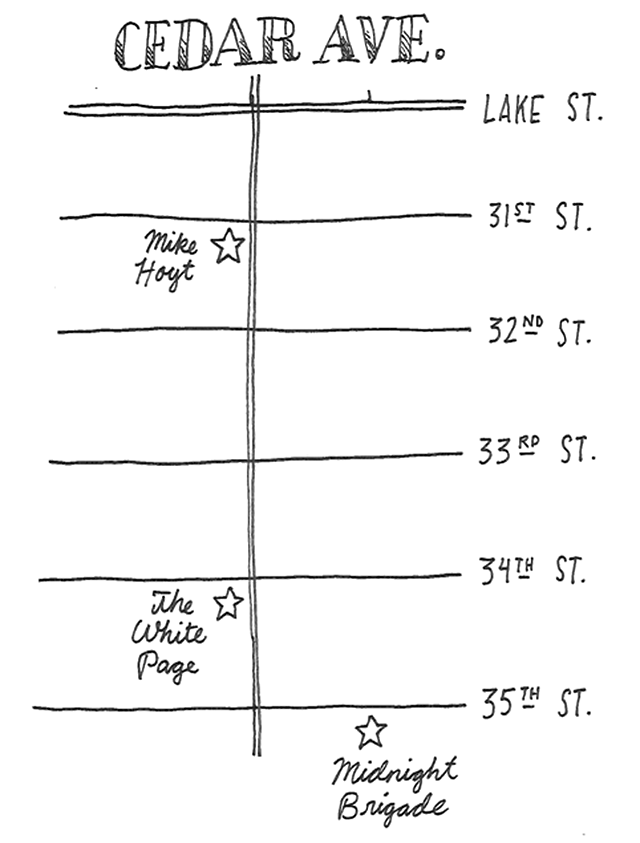 There probably are a few eastern red cedars near or around Cedar Avenue in South Minneapolis these days. But the name is more a metaphoric flourish than a literal description.

Historically, towns have loved naming streets for trees because it imparts a quality of sturdiness and permanence. Cedar Avenue is like that: A long, steady, and reliable street. It feels sturdy, like it’s not going anywhere.

It’s one of the city’s main commercial drags, an unbroken run of one- and two-story business structures serving the old streetcar line. Between the West Bank and the Crosstown, most of the buildings are attractive and in good shape, and home to businesses both established (cherished institutions such as Matt’s Bar, the Cedar Cultural Center and Soldiers and Pioneers Cemetery are along Cedar), and new. There’s plenty of space (and it’s generally inexpensive enough) for regular turnover, for experiments, for new ideas, and for different types of businesses to coexist.

Since the demise of the Warehouse District gallery scene of the late 1980s, Twin Cities galleries have tended to be spread across disparate, far-flung parts of the city. If there are four openings on a given Friday night, shuttling among them most likely will involve at least three 15-to-20-minute commutes (or, more likely, giving up and limiting yourself to one). Photographer Alec Soth griped about this decentralized quality in City Pages last year: “Here, you’ve got the Weinstein Gallery over here and you’ve got the Soap Factory over there, and you have to schlep yourself from one place to another.”

So when a small cluster of gallery or project space activity starts up, all within walking distance, it’s nice to take notice. In the past year, a four-block stretch of Cedar south of Lake Street has become to home of three different artist projects. They are unrelated, but each was attracted to the qualities that make Cedar Avenue such an artery of the city’s public life.

“I saw a listing on Craigslist and contacted Ash about the spot. The next day we signed the lease,” he said. Since then, the gallery has hosted a wide range of artists and musicians, particularly those operating between those disciplines. Wurst’s background is in music (he runs a tape label) and Hane is a printmaker and also runs a fashion line. At the end of the month, Hane will be taking over all operations in the space. 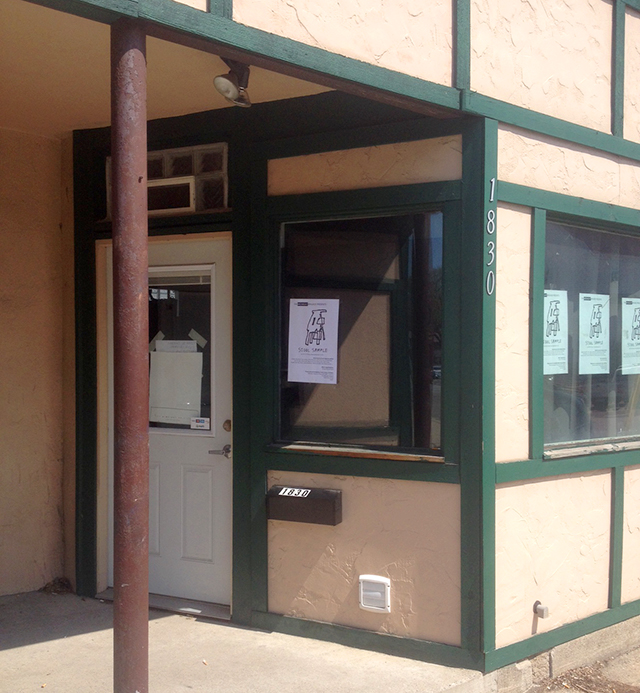 “I don’t really like throwing just an art opening, or just a music show,” says Wurst. “Things get more interesting in the places in between two things … Every art opening that we have thrown has had a DJ playing all night. I have always thought art openings should be more party than quiet-talky-talk places.”

A block away, at 34th Street and Cedar in the old Modern Window Shade building, is the White Page Gallery. Opened in 2013 by four recent college graduates (three of them from Alfred University in New York), the gallery had previously been located on 42nd Street near the Blue Line LRT. It’s not that far away – only about 20 blocks – but the new location in a large, sunny corner building already feels centrally located in a way the old space didn’t. It’s on one of the busiest north-south roads in Minneapolis between two of the busiest east-west roads.

“It’s definitely easier for people to stop by,” says Alanah Luger-Guillaume, one of the four artists who operate the gallery and residency program. “It’s more like we’re in the middle of a neighborhood.”

White Page partnered with Mirror Lab, a collective of seven artists who work in film, multidisciplinary and time-based media, and had previously been based in a warehouse in St. Paul. Together, they’ve been slowly building out the space for use as a production space, studio and event venue. The front room is a white cube with ceiling-high windows and tin ceilings, excellent either minimal sculptural exhibitions,  live music or literary events. Earlier this month, the room hosted an AWP conference reading by writers affiliated with the St. Louis alternative art space Fort Gondo. The room handled a mass of sweaty, out-of-town interdisciplinary poets wonderfully. 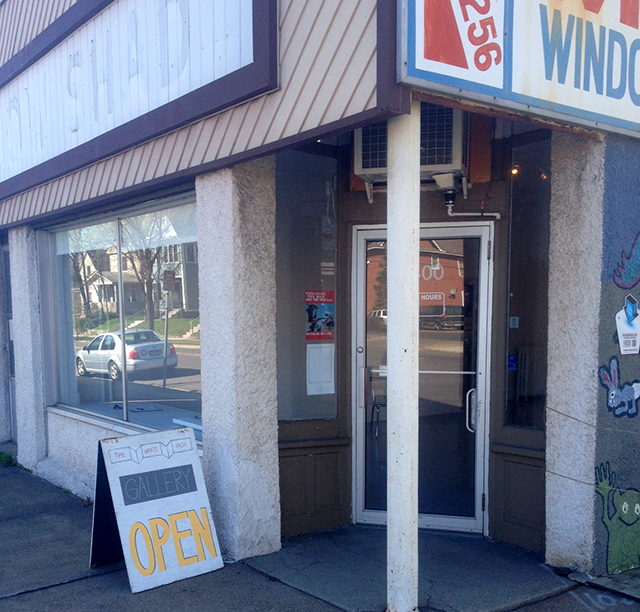 Next door to the gallery space, there’s a screen-printing setup with a meeting area, as well as another back room with a woodshop. There is a fully functioning darkroom in the basement. Between the two organizations, there are eleven artists, each with studio space in the building. In addition there is space for visiting artists in residence, who White Page invites to stay and work in Minneapolis for several weeks a year. “It all makes for a lively space,” says Alanah. The plan is for more events: A regular experimental music night, film screenings, readings, craft sales and more.

The name of the building’s previous tenant is still visible in a ghostly outline over the windows. That will change soon. As of last year, the building is owned by Forrest Wozniak, a noted sign painter in the Twin Cities whose handiwork is visible all over town. In fact, Wozniak is only the third owner of the building in 105 years. He’ll be painting the names of the building’s new tenants, The White Page and Mirror Lab, over the old. Like most of Wozniak’s hand-lettered work, the sign’s visuals will most likely blend seamlessly into the commercial corridor surrounding it. “It’s the cultural responsibility of a signpainter to affect the landscape,” he notes.

For the time being, Mike Hoyt’s studio is a small former dressmaker and tailor shop at 31st Street and Cedar. It was built sometime in the early 20th century and shares its lot with a two-story house. For many years, it was a carpet remnants shop, and the interior still bears the classic marks of a midcentury business: wood-paneled office, drop ceiling, and a boxy, turquoise blue metal security camera in the corner that whirs to life if Mike plugs it in.

It’s a strange little hatbox of a building, “hit by cars a lot,” Hoyt points out, as the misshapen northwest corner of the shop testifies. Both Cedar and 31st Street are very pedestrian-heavy thoroughfares, but they also carry a great deal of fast-moving traffic. I used to live on 31st Street, not far from here, and not a month went by where there wasn’t a dramatic SMMMMMASSSSSSH!!! outside my window.

Hoyt’s art includes public projects and studio work. A project from last year, One Another, encapsulated that nicely – a bike-pulled drawing station Hoyt would set up in parks around south Minneapolis, and then draw portraits of residents while talking to them. A few of those drawings appear in the window of his studio on Cedar. 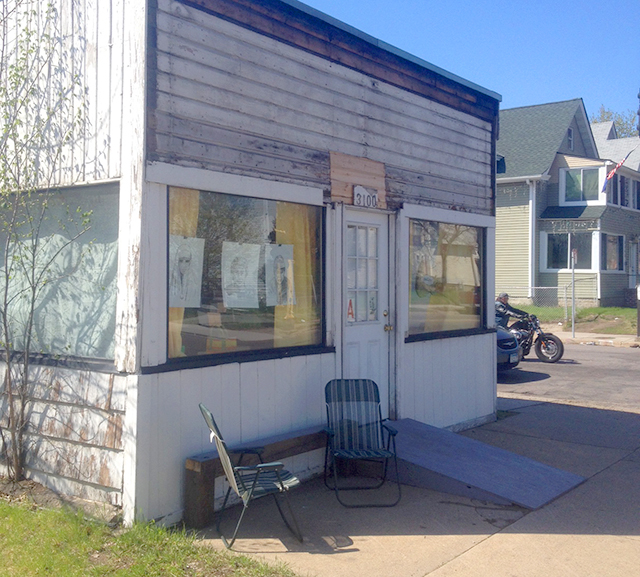 He was looking for a low-key space to work for the duration of a McKnight fellowship he was awarded last year, a space where he could focus on making some paintings. The work he’s making now is based on trying to bridge the public and private. They are paintings memorializing public meetings he’s been involved with in his neighborhood in Central, not far from the studio in Cedar.

The location is not purely a quiet, out-of-the-way spot, however. “People are always peeking in, people knock on the door,” he says. “They ask, ‘We’re wondering what’s happening here?'” He’s gotten to know the neighbors, and has held a few events in the space. Artist Stephanie DeArmond has shown some work, and he’s discussed the possibility of a small show with photographer Xavier Tavera.

Having a space that can function in both the public and private realm as works well for Hoyt. “Once you realize you want to engage with people,” he says, “it’s there.”