In a recent episode of the Cartoon Network show “Lucas Bros. Moving Co.” — one of the best meditations on the experience of being a twin in the pop cultural universe right now — identical twins Keef and Kenny Lucas each purchase a copy of the same CD while out shopping. They explain their philosophy this way: “We always buy two of everything, so we can have the same experience at the same time.”

The same goes, often times, in these twin cities. There is occasionally a certain duplication of efforts so that both cities can have the same experience at the same time. We have two city halls. We have two central libraries. We have two professional baseball stadiums. We have two Interstate 35s.

Surprisingly, for two hyper-competitive cities built at roughly the same time, there’s not a lot of duplication in the names of the streets. There seems to have been some general regard for steering clear of the other city’s naming conventions. Imagine how confusing it would be if St. Paul had gone with numbered streets – if, instead of Ford Parkway, it had been named, say, 36th Street. You’d be given instructions to go east on 46th Street, and cross the bridge onto 36th Street. What? People would be so confounded they’d never bother to cross the border.

The street names that are duplicated tend to be unsurprising. There are streets named for prominent Minnesota political figures or place names (Snelling, Marshall, Minnehaha), or for U.S. presidents (Jefferson, Van Buren, Jackson). Sometimes they’re just common street names you’d find anywhere in America (Broadway, Portland, Laurel, Walnut, Woodlawn). Occasionally they share a name, but not a common source (James and Thomas Avenues in Minneapolis are from the surnames of a writer and general, while in St. Paul, those streets honor the first names of developers). The Twin Cities’ two Morgan Avenues were named for two different people both named George Morgan: a Minnesota Civil War-era general gives his name to Minneapolis’ Morgan Avenue, and a clerk in the St. Paul city surveyor’s office is the namesake of the Morgan Avenue in Highland Park. If I could prove that the St. Paul George Morgan was named for the elder Gen. Morgan, we’d really have something, but alas, I cannot.

Of all of these streets, I picked two close by each other – Mount Curve Boulevard/Avenue and Lincoln Avenue – to see what similarities and differences one might find on the street in each city. 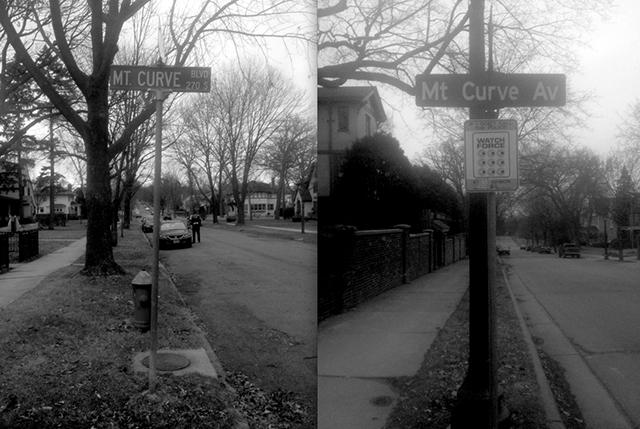 MinnPost photos by Andy Sturdevant
Mount Curve Avenue is in Lowry Hill in Minneapolis, and Mount Curve Boulevard is in St. Paul near the Mississippi River near St. Catherine University.

Mount Curve Avenue is in Lowry Hill in Minneapolis, and Mount Curve Boulevard is in St. Paul a few blocks east of the Mississippi River near St. Catherine University. The Minneapolis one, in this case, is the older: A New England merchant named Thomas Beard carved it out of the side of what was then known as the Devil’s Backbone in the 1870s, while the St. Paul version was platted in 1915 by a real estate mogul with the unimprovable name of Den E. Lane (his credo was “own your own home!”). There is not, as far as I can tell, a historical Mount Curve anywhere in the world; the name simply seems to describe the topographical situation atop which the street rests. 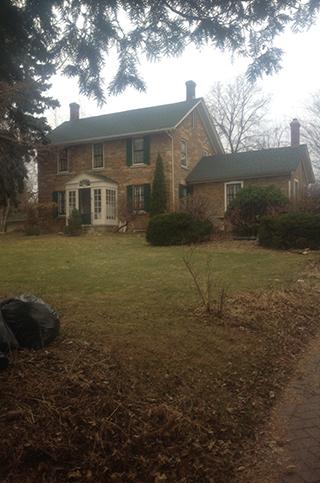 MinnPost photo by Andy Sturdevant
On St. Paul’s Mt. Curve, there are some bigger houses, but
not what anyone would really describe as a mansion.

Mount Curve has been generally regarded as one of the more prestigious street addresses in Minneapolis for a long time, and it’s my guess that Den E. Lane was trading on that prestige when he gave Mount Curve Boulevard its name. Minneapolis’ Mount Curve remains one of the best places in the city limits to go fantasy house-hunting for your dream mansion, and offers an interesting contrast with the Twin Cities’ other notable mansion district, Summit Avenue. While Summit Avenue mansions line a wide, central promenade for all to admire and envy, the mansions of Mount Curve are tucked away high and tight from the rest of the city. Mount Curve is a definite anomaly; curving and way up on a ridge, very different from the flat and straight streets in most of the rest of Minneapolis. Nearly every house on Mount Curve is architecturally notable in some way or another – you want stone castles with towers? You’ve got them. Home-grown prairie style estates? No problem. California-style high modernism with flat roofs and 45 degree angles? Right this way, please.

The constant dull roar from I-94 by the Walker Art Center (and from 394 to the north) is probably something the architects hadn’t anticipated, but the views of downtown are excellent. Or I imagine they probably are. The houses consistently block the view from the street. So it goes: The captains of industry got here first. I need to figure out how to get invited to nicer parties. 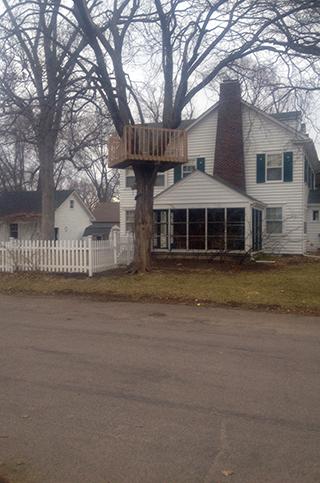 St. Paul’s Mount Curve is more modestly appointed than its western counterpart, and quite a bit shorter. It only curves slightly as it hugs the coast of the Mississippi River, and there’s not much in the way of significant mountainous elevation. There are some bigger houses, but not what anyone would really describe as a mansion.

It is, however, further proof that you can pick any residential street in the Twin Cities, walk down it, and find lots of small treasures along the way. Ambitious second-story treehouses, concrete lions, and lawn ornaments shaped like horseheads are all somewhere along the way. One neat surprise is at 375 Mount Curve, a private home that appears much, much older than anything else on the block. It is: It’s a yellow limestone farmhouse built in 1864, complete with a National Register of Historic Places marker near the driveway. Named for Frederick Spangenberg, the German dairy farmer who built and owned the farm here in the 19th century, the rest of the neighborhood grew up around this lone house. It’s surprising to find anything this old outside a few historic districts, so it’s a welcome reminder that while street names aren’t always that old, the paths they’re imposed upon are very old indeed. 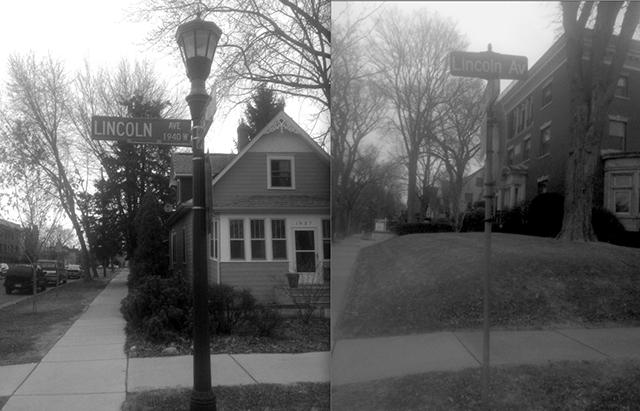 MinnPost photos by Andy Sturdevant
The two Lincolns have a few things in common: Both date to about the same time, the immediate decades after the president’s death, and both are just a few blocks from their respective Mount Curves.

The Minneapolis Lincoln Avenue isn’t really much of a street; it runs east-west for only about 10 blocks between Kenwood Park and Hennepin Avenue. The blocks are short, so many of the houses face the north-south streets; very few residences carry Lincoln Avenue addresses. Mostly Lincoln is a street of carriage houses and detached garages. Some of them are huge – there’s at least a few  carriage houses on Minneapolis’ Lincoln Avenue that are as large as (and maybe larger than) actual houses in St. Paul’s Lincoln Avenue. It almost feels like walking down a really fancy alleyway. You see a lot of the sides of some large and remarkable houses, as well as some of their backyards – gardens, trampolines, decks, barbecues, some nice landscaping. Around James Avenue (another duplicate street name), there’s a back porch watched over by two chrome owls made entirely of automotive parts. Ingenious!

At the end of Lincoln, overlooking Kenwood Park, is the E.E. Atkinson House, built by and named for the man who was once known as the Marshall Field of Minneapolis. A contemporary biography notes Atkinson as a man who loved golf, and it’s clear he loved the finer things, whatever form they took – the house, and its adjoining carriage house and palatial patio, are all so elaborate I thought it was a museum as I approached. Though it has a substantial presence on Lincoln – the side entrance has a tiled awning that is something to behold – like most of the houses here, the front door faces the north-south streets. 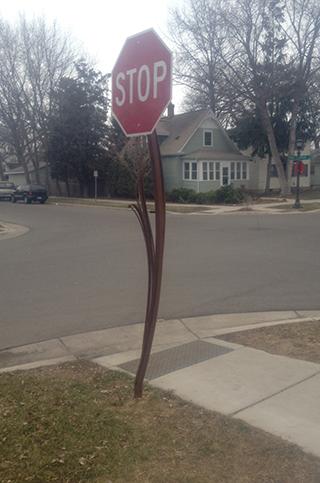 St. Paul’s Lincoln Avenue is more of a major thoroughfare, running from the University of St. Thomas through Macalester College and terminating at Grand Avenue. Like St. Paul’s Mount Curve, it’s also less tony than its western counterpart, though there are some larger houses, especially as you get closer to Crocus Hill. I stayed closer to the river and to Mount Curve, and most of the houses are smaller brick, stucco or shingle affairs. It feels like a standard east-west running St. Paul residential streets, just two blocks off of Summit and a block off of Grand, but without a lot of the trappings of those two arterial streets.

Notable here are the stop signs, one of those small, probably neighborhood-funded improvements that add in a modest and pleasing way to a neighborhood’s sense of itself. The posts are in the shape of a blade of grass or plant stalk, with a rust patina, holding up the red octagon.

Thinking back on the two walks, I was a little surprised I didn’t confuse the two same-named streets with one another in my memory. I thought each might bleed into the other: Which Lincoln was that one house on?

No really, though. Lincoln Avenue in Minneapolis is in no way a bizarre version of its St. Paul equivalent, and the two Mount Curves are quite distinct. Unlike my colleague Bill Lindeke’s Numerological Twilight Zone, it’s hard to imagine someone getting confused when receiving directions about where they were. I couldn’t picture someone standing outside a carriage house on Lincoln Avenue in Minneapolis yelling into a cellphone, “Wait, you mean you live on the Lincoln Avenue in St. Paul? Where the hell is this, then?” Or someone driving west on Summit, making a wrong turn and seeing the sign for Mount Curve, and wondering how they accidentally got all the way into Minneapolis. For the most part, if someone directs you to Marshall, Minnehaha or Snelling, you’ll have enough context to know exactly where you’re expected to be. Whether or not you’ll have the same experience, however, is another question altogether.