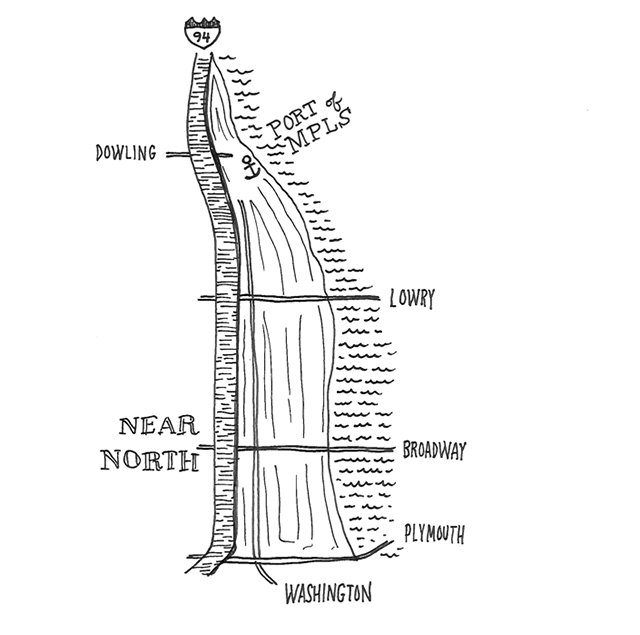 MinnPost illustration by Andy Sturdevant
Caught between the Mississippi River on the east and the human-made river that is I-94 on the west, you find a narrow isthmus of factories, warehouses, wholesalers, industrial facilities and small houses in the parts of North Minneapolis between Plymouth and Dowling.

Caught between the Mississippi River on the east and the human-made river that is I-94 on the west, you find a narrow isthmus of factories, warehouses, wholesalers, industrial facilities and small houses in the parts of North Minneapolis between Plymouth and Dowling. Washington Avenue hugs the east side of I-94 for most of the way, until it and 2nd Street N. are squeezed together by the narrowing isthmus, and only 2nd Street remains. A sound wall blocks most of the residential areas on the west coast of the highway from view, but Washington Avenue, mostly light industrial, looms up there like a cliff on the east side. Looking up from 94, the stark, neutral-colored concrete and cinderblock facades of most the buildings along the way create the sheer sense of a bluff – the blight cliffs of Dover.

Of course, that isn’t a totally fair assessment (it is a snappy turn of phrase, though, which is why I included it.) The more picturesque remains of Minneapolis’ industrial past remain lovingly tended around the mill districts, but the industrial isthmus north of downtown is a little bit like the unreachable corner of a packet of ketchup that’s been squeezed dry; the central urban core’s industrial manufacturing base is gone except in these outer pockets. It’s truly a pocket, inaccessible from much of the rest of the city except via Washington Avenue and a few bridges. The stretch of road is home to a motley assortment of businesses, mostly the kinds that serve manufacturing and don’t necessarily need public-facing storefronts or clever names to remain viable – Advance Rubber, Crankshaft Supply, Minneapolis Oxygen, Industrial Lumber and Supply. If one of the glossy local magazines ever has a “Best Industrial District” category in their annual “Best of the Twin Cities” roundups, this one beats Mid-City Industrial and the Minnehaha/Dight/Snelling corridor in Longfellow handily.

For the signage enthusiast looking for beautiful old signwork left to remain in peace after decades, there’s plenty to see. The Mandeville Meat Supply Co. signage has been preserved by the building’s most recent tenant, City Surplus, in an odd sheet-metal-sided building dating to 1902. The B&M Electric Service building at 15th Street and Washington – a handsome old structure that stands out among the flattened landscape around it like the lone tooth in an empty set of gums – carries a similarly vintage “Alternators” sign.

MinnPost photo by Andy Sturdevant
For the signage enthusiast looking for beautiful old signwork left to remain in peace after decades, there’s plenty to see.
Article continues after advertisement

South of Lowry, where the isthmus is a little wider, there is a heavier concentration of warehouses and active industry, mixed in with bars, eateries and gas stations to serve the people who work there. It feels like a more natural transition from the Warehouse District, in terms of the types of buildings and businesses. The Minneapolis Photo Center is here, as are two of the most unlikely drinking establishments to share a block – Donny Dirk’s Zombie Den (nee Stand-Up Frank’s) on one end of the pop cultural spectrum, and Cliff ‘n’ Norm’s Bar (nee Halek’s) on the other end of that spectrum. It’s hard to believe sometimes that both George Romero and George Wendt have had such staying power in the collective consciousness all these years. 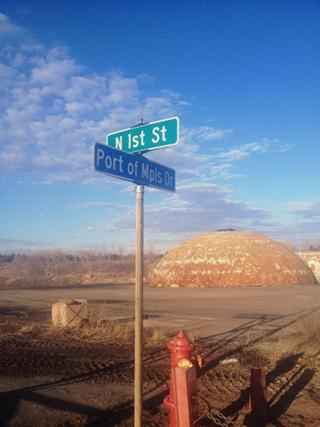 MinnPost photo by Andy Sturdevant
Ask almost anyone in Minneapolis where “Port of Minneapolis
Drive” is, and they’ll think you’re making it up.

North of Lowry, the isthmus narrows and the buildings get older, farther apart, more boarded over. The really heavy industry, Aggregate Industries and Northern Metals, all smokestacks and tanks and steel, loom off in the horizon, closer to the river than to the freeway. Collected along Washington and the freeway are the smaller shops and businesses that provide support services for those heavyweights. These industries grew up around the river and barge traffic, in the middle of the 20th century. The highway came a little later, pushed through an area that was already primarily industrial in use, where 18-wheelers carrying steel, coal and asphalt could easily get on and off the interstates. Before both, there were train tracks running between Washington and the river, adding a third and even older method of transport to this narrow landscape. Grain, fertilizer, salt, asphalt, steel, crushed stone, aggregate, twine and pipe come in and go out. You’ll still find rows and rows of 18-wheelers along Washington, parallel parked for almost half a mile. But the economic realities that shaped the isthmus are changing in the early 21st century.

There is a Port of Minneapolis, though, at least for the time being. It’s a sight to behold, the sort of place where you feel like you shouldn’t be walking around with a camera.

The metal structures are rusting out, paint peeling off. When the Lock and Dam at St. Anthony Falls closed last year to stem the carp invasion, barge traffic north of the locks dried up, as well. There’s been talk of redevelopment around this site for ages, but for the moment, it stands as a decaying monument to heavy industry. 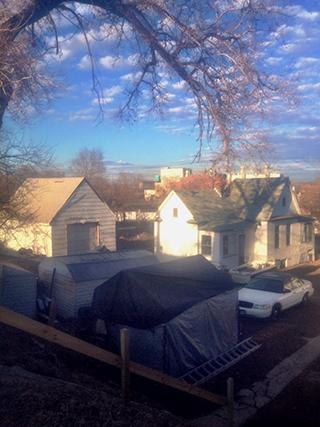 MinnPost photo by Andy Sturdevant
There are some residential pockets stitched into the
landscape, most notably a small neighborhood around 33rd
Avenue,  just north of Lowry.

You would think a walk through this landscape would be lonely, and to some extent you’d be correct. But there are some residential pockets stitched into the landscape, most notably a small neighborhood around 33rd Avenue, just north of Lowry. They’re in a sort of holler, a few sets of staircases down from Washington and close to the river. They reflect a time when residential and industrial sites were, for better or worse, closer together, when factory workers might have been able to walk to the factories.

The houses are much older than the surrounding area, built in the first years of the 20th century for the most part. These houses are full of families, and kids are running up and down the street, dogs are in the yards, homemade decorations are on the garage doors and front doors and stoops. Like the rest of this rust belt isthmus, it’s a little slice of Pittsburgh in Minneapolis.