In the 1920s, the regents of the University of Minnesota had an idea for sweetening their recruitment packages. What if, they decided, a small neighborhood was laid out and built on university-owned land not far from campus? Somewhere in between Minneapolis and St. Paul, near transit lines and big, open swaths of parkland. Not a planned community, exactly, but a collection of elegant-yet-affordable houses built on university land but owned by the residents, available only to professors and administrators. Even better, perhaps there could be a mandate that each house in the neighborhood had to be built by an architect specifically for the site, ensuring that the housing stock would be interesting and expertly designed for the surrounding area. And building costs could be capped at, say, $10,000, so no one could do any flagrant architectural showboating.

Perhaps a brilliant prospective professor also eyeing tenure-track positions at Michigan or Northwestern might choose the U after having such a unique opportunity thrown in the mix. Why mess with some bungalow in Ann Arbor or Evanston when you can have a custom-built home in a friendly, university-adjacent neighborhood in the Twin Cities? (Stanford and Princeton had similar programs.)

The regents signed off on all of this, and put the plan into action. In 1928, University Grove was born, a collection of owner-occupied houses on a little slice of land adjacent to the St. Paul campus, built primarily from the 1930s through the late 1960s, and owned entirely by university-affiliated families. In 1989, Linda Lee of the New York Times paid a visit, and – in an affectionate profile that has been lightly misquoted since – called it “a living time capsule of vernacular modern architecture in America.” 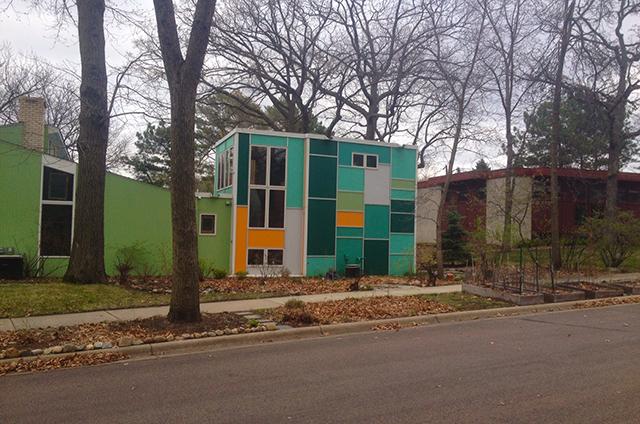 MinnPost photo by Andy Sturdevant
The Jenkins House, on Folwell between Burton and Coffman, with an addition on the back that houses a library.

And it’s just that, a collection of 103 homes that show off the best features of its era. As far as being an appealing hook for prospective professors, it absolutely works. It’s one of the most enviable neighborhoods in the Twin Cities. Walking through the leafy streets and enjoying so much great midcentury architecture, I thought I might want to give up this column, go back to graduate school, and take up teaching as an avocation so I have a shot at living in one of these houses sometime in the next 30 years.

Dreaming is free, though, as Debbie Harry said, and if you’re the sort of person who enjoys self-guided architectural tours, this is one of the most enjoyable around. The Minnesota Historical Society is well aware of this fact. It has led at least one home tour in the past few years, which proved to be a sellout affair. 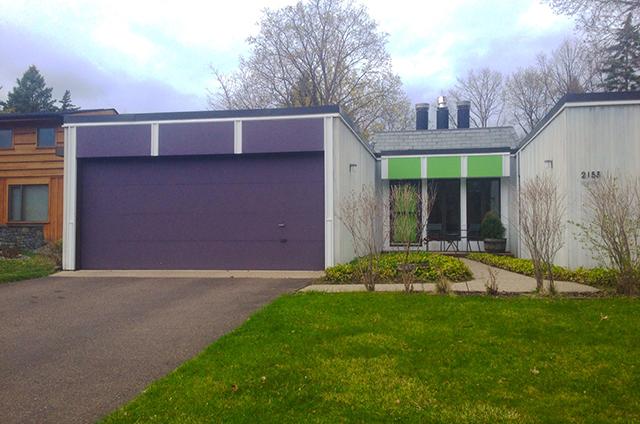 University Grove is actually in Falcon Heights, not in St. Paul proper – it’s just over Hoyt Avenue, which is the northernmost border in this part of the city. Like some of the streets profiled two weeks ago, the neighborhood’s street names are almost a double for a similarly named neighborhood on the west side of the river. The Luella Anderson Addition neighborhood in Longfellow, built on former university-owned land, is sort of a kissing cousin to University Grove. Though not owned by the U, it also has the majority of its streets named for U of M presidents. Each neighborhood has a street named Coffman, Burton, Northrop, and Folwell, and the layout is even vaguely similar. (Burton and Coffman run parallel, in both cases.)

The earliest houses in the area were what you might expect – Colonial revivals, or dignified brick and ivy structures. Beginning in the 1930s, though, as architectural tastes were shifting, the houses of University Grove took on an increasingly modernist quality. For maybe the first time in American history, a native Midwestern-born style, the Prairie School, was considered the most celebrated and progressive in the world. Next door in Wisconsin at Taliesin East, Frank Lloyd Wright was pushing the language of vernacular architecture into completely new territory. Architects all over the world were following suit.

It’s these modernist houses that are the most interesting in the neighborhood, and there’s an incredible concentration of them along Folwell, Hoyt and Coffman. The cities’ most famous modern architect, Ralph Rapson, is responsible for several of them, as are the midcentury team of Winston and Elizabeth Close.

There’s so many to choose from, but a few favorites stand out. Ralph Rapson’s house on Hoyt near Coffman, built for Patarasp and Shirley Sethna in 1967, looks very much like many, with the exception of a big yellow Color Field-style circle on the garage door. (Apparently, Rapson wanted it to be red, but Sethna pushed for a “more cheerful” yellow.) 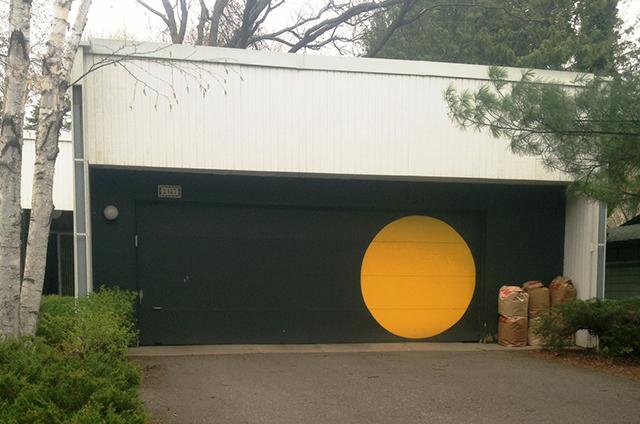 MinnPost photo by Andy Sturdevant
Ralph Rapson’s house on Hoyt near Coffman, built for Patarasp and Shirley Sethna in 1967, looks very much like many, with the exception of a big yellow Color Field-style circle on the garage door.

Compare the Sethna circle to something in the Walker Art Center’s collection, like Thomas Downing’s Fold Six, painted in 1969 and acquired by the Walker in 1970. It gives you a sense for the cross-currents in art and architecture at play at this time.

Rapson also designed the Harold Kelley House, at Folwell and Burton, which is my personal favorite. From 1957, it strikes the most pleasing balance between modest functionality and modern whimsy. The colored panels, versions of which show up in Rapson’s Riverside Plaza a few years later, are most prominent here. But my favorite is the wood timber incorporated into the design. Modernist architecture can sometimes impart a chilly quality in the materials, but the wood warms and softens the edges. It gives the pleasant, cedar-scented sense of a rustic cabin – never far from the minds of Minnesotans where vernacular architecture is concerned. 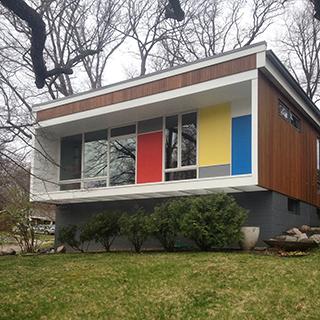 MinnPost photo by Andy Sturdevant
The colored panels, versions of which show up in Rapson’s
Riverside Plaza a few years later, are most prominent here.

I recently watched “Los Angeles Plays Itself,” Thom Anderson’s incredible 170-minute documentary about Los Angeles’ self-identity, as portrayed in hundreds of interconnected film clips. (And now streaming on Netflix!) One of the ironies Anderson points out is that these spacious, airy and, dare I say it, beautiful modernist buildings in Los Angeles, a crucial part of the city’s heritage and identity, are always being used in movies as the homes of supervillains and criminal masterminds. For example, think of the 1963 landmark Sheats Goldstein House use as the home of Ben Gazzara’s sleaze merchant Jackie Treehorn in “The Big Lebowski.” Modernism often gets a bad rap.

Maybe that’s what’s so appealing about so many of the University Grove houses. Taken as a whole, they show that modernist architecture isn’t a monolithic thing, but a broad palette with room for many varieties of shapes, surfaces and expressions.  A lot of the materials you see in use in the houses – wood, for example – or the way the windows are created to reflect back the burr oak savannah in which the neighborhood is built, seem beautifully integrated with both their natural settings and the disparate architectural styles around them. It’s a collection of modernism with a distinctly Midwestern accent.