Most of the subjects for this column come about the traditional way. I will be walking, riding a bus or a bicycle, or driving somewhere around the Twin Cities, and then see something interesting that catches my eye. I take a photo or a short set of notes, and then come back to it later. I can only cover so much ground personally, though, and so strolling comes in lots of forms. A lot of ideas begin with offhand references encountered in books or on the Internet. Some historical fact or name or the shape of a street or neighborhood will seem interesting, and I’ll look into it further.

To that end, I got lost down a local Wikipedia rabbit hole a few months ago, and somehow ended up on the page for Hassan Township, a former township in the far northern tip of Hennepin County, about 30 miles from downtown Minneapolis up Interstate 94. Hassan was the last remaining township in Hennepin County until it abandoned its bid for incorporation in 2003 and was absorbed into Rogers five years later.

The Wikipedia pages for small towns are endlessly fascinating and vary wildly. The majority of them are just a smattering of Census figures, with maybe a few historical facts or “Notable Residents” sprinkled in (athletes, mostly). Often, though, you’ll come across one that has clearly received contributions from people who had an interest in putting the town’s best online foot forward. Hassan Township’s article is one of those. The section on its history covers a lot of ground in relatively colorful prose (“Hassan’s rolling landscape was composed of farmsteads, cultivated fields, scattered homes”), and cites a variety of sources. Upon further inspection, most of the information originated from the Hassan Area Historical Society’s website, though that’s not specifically cited in the Wikipedia article. You can always see the history of Wikipedia edits and piece together the story of how the article came together, but you can never know for sure. Were these semi-anonymous writers local residents? Hassan historical enthusiasts? People with ties to the area, or just general fans of farmsteads in rural Hennepin County?

Obviously, that’s something I have to go see in person.

This quote turns out to be from a 1994 article in Hennepin History magazine written by Michael Koop of the State Historic Preservation Office:

“Fletcher is the finest example of a traditional crossroads hamlet remaining in Hennepin County. It still contains the most essential components of a small service center such as a school, a church, a former general store, private residences, and several farms. Perhaps more importantly, the rural flavor of Fletcher has not been spoiled by suburbanization and the construction of commercial businesses.”

This crossroads is specifically at Fletcher Lane and Territorial Road, not far from the Rogers exit on I-94. Approaching it from this direction, one doubts that Koop’s assessment can remain true 20 years on. Driving down County Road 81 to Fletcher Road, it’s pure Hennepin County exurb: mostly light industrial, office parks and strip malls, the exact sort of suburbanization Koop mentions. 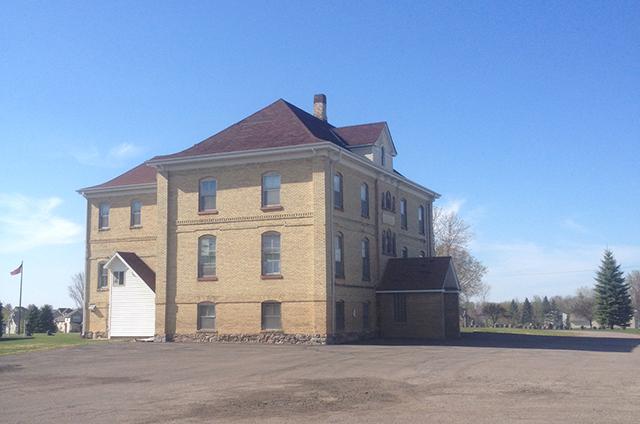 MinnPost photo by Andy Sturdevant
Standing in the center of the crossroads, you see a cemetery and an elegant school and city hall made of yellow Chaska brick to the northwest.

But then, something amazing happens. You turn onto Fletcher Lane and cross a set of railroad tracks, and the scene changes instantly. Like someone flipped a switch labeled “Suburban / Rural.” South of the tracks, the light industrial facilities vanish, and Fletcher becomes a gravel road with open farmland to the east. Any cars traveling down the lane kick up a massive cloud of dust behind them, visible for half a mile. When I turned onto Fletcher Lane, an actual farmer (or someone who at least looked like a farmer) in a green seed cap and denim overalls was walking by.

In a few hundred yards, you’re at the crossroads, and damned if Koop wasn’t completely correct in his assessment. Fletcher has the foundations of a textbook 19th-century crossroads hamlet. If you’re a German farmer in 19th-century Hennepin County, you can take in your entire social and economic life in one sweeping view, located on a single intersection, bisected by the roads leading you to the markets in Minneapolis. Standing in the center of the crossroads, you see a cemetery and an elegant school and city hall made of yellow Chaska brick to the northwest, a German Catholic Church and rectory to the northeast, an old two-story commercial building to the southwest, and a farm to the southeast. The place where you’re born, where you go to school, where you work, where you worship, where you vote, where you get married, where your children go to school, where you buy your provisions, and where you die and where you’re buried when it’s all over: They’re all right here in one place, on this crossroads.

Of course, standing in the center of those crossroads today is largely impossible. The intersection is almost comically congested at 5 p.m. on weekday. Fletcher Lane may be a gravel road, but the two state highways that meet here are two-lane blacktop, stretching between the wide swaths of suburban homes and businesses between St. Cloud and the Twin Cities. Still, if you park your car in the lot near the northwest corner and you can deal with bewildered stares from motorists wondering what you’re doing on foot on the shoulder of a county highway, it’s a good place for a walk. 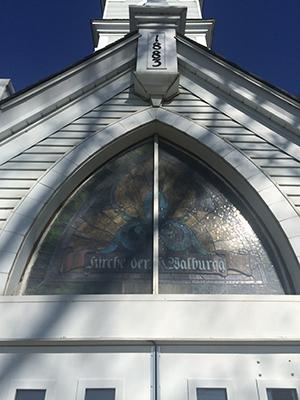 This was German country. To some extent, it still is. Fletcher was originally known as St. Walburga, named for the eighth-century English nun who evangelized pagan Germany with her siblings, and for whom the European spring festival of Walpurgis Night is named. Walburga is often associated with Bavaria – her remains are in the Bavarian city of Eichstätt – and the immigrant farmers who settled the area were from these heavily Catholic enclaves of southern Germany. They built a church named for the saint here in 1883 – it has since become renamed the Mary Queen of Peace after a merger with another area church, though the stained glass window over the front door still reads “Kirche der St. Walburga.” The church sits on a high point on the road, making it an obvious landmark for travelers coming in any direction. This is apparently one of the highest points in Hennepin County, and the roads do seem to rise to meet this little crossroads.

Across the street is the other social hub of the township, the school and town hall. It now simply reads “HALL” over the front door – chained locked at the moment – but you can make out the faded outline of “St. Walburga” beneath it. The name of the town was changed to Fletcher at the turn of the century, at the request of Republican Rep. Loren Fletcher, who granted the township a post office. However, he only agreed to do so on the (outrageous-sounding, to my ears) provision that the post office and the town be named for him. One wonders how a hall full of angry German farmers who just wanted their mail delivered to them handled this demand. Fletcher wasn’t even in office more than another few years, but the name remained.

The cemetery outside the hall indicates the full depth of German settlement. It’s full of generations of surnames like Heinz, Stenglein, Hagel, Schober, Goth – few Scandinavians, few Irish or English names. There are many older gravesites, but the majority of them are newer, and it’s on these where one finds the most striking aspect of this German farming town. 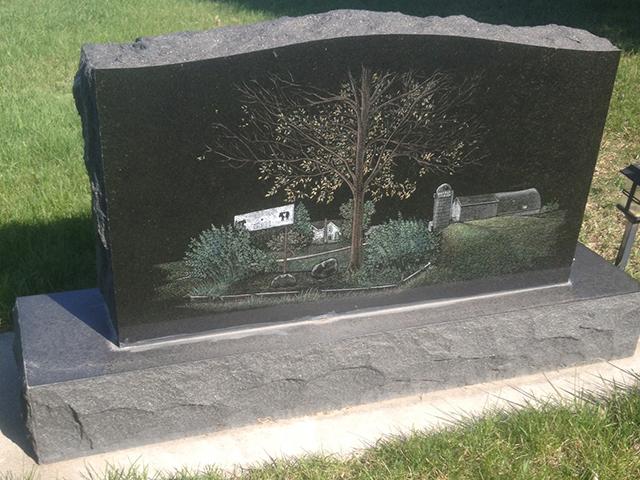 Many of the headstones are black marble, with carefully crafted and intricate drawings of farm sites on them. On the reverse, or under the name, there will be a farmhouse, with silos, a field, a barn, a tractor. At first glance, they may seem like they might be readymade agricultural scenes, perhaps chosen from a number of standard options. Upon closer inspection, however, they seem to be representations of actual farm sites in the area. The grave of Kenneth A. Schober, 1934-2004, depicts his farm on the reverse, and even has a street address on a roadside sign in the image – SCHOBER’S 19301, probably a familiar landmark to his neighbors. Nearby, the Heinz family’s headstone also depicts the farm, seen from an aerial view. From above, the sprawling complex appears both idyllic and demanding, the work of a lifetime. 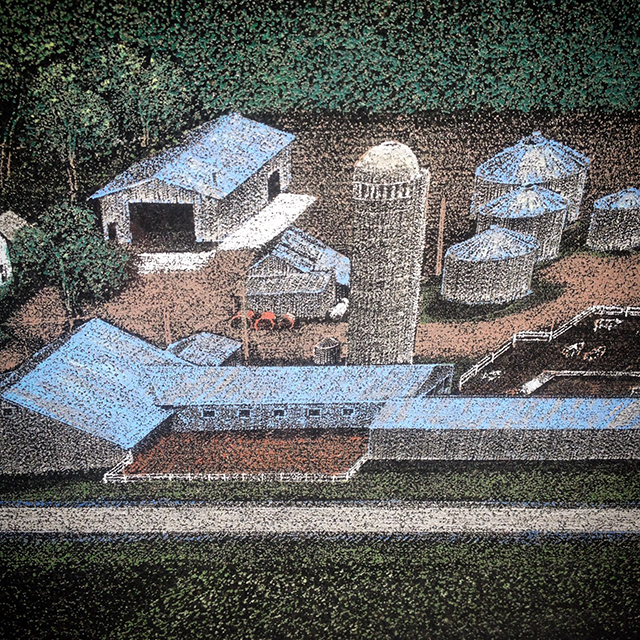 These handcrafted testaments to the family farm and the German heritage of the men and women who worked them into the 21st century are consciously elegiac and sentimental, but also show a fierce pride in place that transcends simple rural nostalgia. They reflect a time when a community could be geographically and economically self-contained enough to contain the full range of experiences for one’s entire lifetime in such a defined space. When someone writes on Wikipedia that a place is the finest example of a traditional crossroads hamlet in Hennepin County, this superlative conveys a similar sense of pride. Whoever put it on the Internet, it’s now out there for the world to see for itself, whenever they may encounter it.