When the vanished Roman city of Pompeii was uncovered and excavated, hundreds of years after being sealed in an airtight vacuum beneath 80 feet of volcanic ash, what were the most compelling discoveries to be found there? What told us the most about the people who lived there?

It was all that preserved graffiti – on walls, over doors, in private quarters, inside and outside. Taken together, it provided an unparalleled view into the quotidian life of the average Roman.

I write a lot about historical sites in this column, and as far as historical sites are concerned, bathroom graffiti is about as historical as you can get. This is why I am devoting this week’s stroll to annotating the graffiti in one of the most important venues for the form in the Twin Cities: the two public restrooms at Hard Times Café on the West Bank.

Here’s a full range of ideas, grievances, jokes, opinions and gossip, all very specifically rooted in their time and place. Whether in Pompeii or on the West Bank, it’s time-sensitive; it all vanishes completely and totally within months or even weeks. It’s not moderated and it’s mostly anonymous, so people write what they’re thinking without much self-editing. If you want to have a good, long listen to the sometimes funny, often unpleasant, occasionally heartening internal dialogue of the collective consciousness, take a trip to a bathroom stall and look around.

“Usually the scrawls and doodles in the bathrooms don’t reveal anything profound or life-altering. They are simply messages and images written and drawn anonymously in the safety of the bathroom stall,” writes artist Amir H. Fallah on this topic. “They capture moments in time where individuals left their marks for the rest of us to see, binding us all together by the simple fact that we all have to go to the bathroom.”

There have been a few scholarly and photographic books on the subject, including one I remember poring over at my college’s library that dated from the 1960s, and that I wish I could remember the name of. (Most of the graffiti was, unsurprisingly, Nixon and/or Vietnam-related.) Today, you’ll occasionally see the odd photo of a particularly witty or accomplished graffito cross your social media feed, but for the most part it’s a phenomenon that is unstudied and invisible.

“The people with whom we should most eagerly desire to come into contact, the cultivated men and women of the ancient city, were not accustomed to scratch their names upon stucco or to confide their reflections and experiences to the surface of a wall,” sniffed one Victorian scholar. That says more about the scholar than the graffiti. All sorts of people write on walls, cultivated or not. That’s the thing about bathroom graffiti: The stakes are low, because no one sees you do it.

Bathroom graffiti varies quite a bit from venue to venue. In most rock clubs, for example, it tends to be heavier on musical self-promotion – a lot more vinyl stickers for rock groups and hip-hop collectives and record labels, and a lot less sociopolitical content. The Seventh Street Entry and the Clown Lounge at the Turf Club were, for many years, the gold standard for this particular sort of thing, and the Triple Rock and The Nomad on the West Bank still have formidable collections in this vein. In bars without a specific focus on live music, especially those frequented by college kids, it tends toward the more scatological and/or lovelorn. In any of these, of course, there are a large number of tags made with permanent markers or paint markers, each in the individual tagger’s handstyle.

Hard Times in particular is a good place to see this sort of thing, because it’s open late and attracts a diverse cross-section of West Bank habitués, many of whom are politically or radically minded. Another advantage to the Hard Times restrooms is that they’re unisex, which means the graffiti is also unisex. Most of the time, you only get one or the other, but here you find men and women are in conversation with one another. 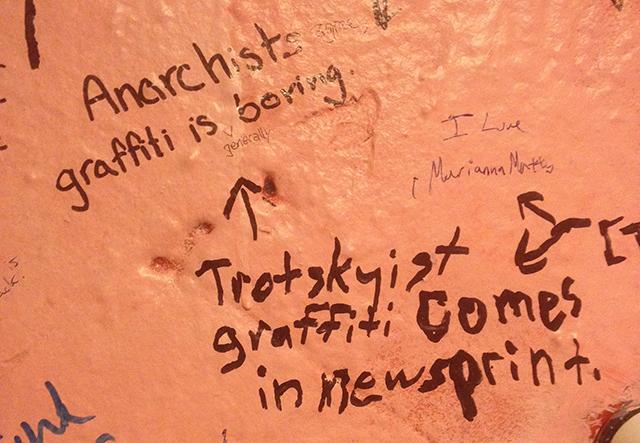 A large percentage of graffiti in both of these rooms is internecine political deliberation, and it’s some of my favorite. It’s also some of the most enthusiastic, as you might expect on the traditionally radical West Bank. One cluster begins with this self-aware assertion: “Anarchist graffiti is boring.” Some fair-minded intercessory has appended “generally” between “is” and “boring.” Another person chimes in: “Trotskyite graffiti comes in newsprint.” A third points to these statements, literally drawing an arrow, and notes that “Tankies have no Graffiti.” “Tankies” – as in “send the tanks in” – is an old epithet for hardline Stanlinists, any leftist who supported the actions of the Soviet Union or China, regardless of the human rights violations that might be involved. Presumably Tankies stay away from making graffiti at the risk of angering their authoritarian overlords. I like that the writers here all assume a deep engagement with various strains of leftist thought on the part of the viewer. I am moderately conversant, but I’ll admit to having to look “tankies” up on Urban Dictionary. 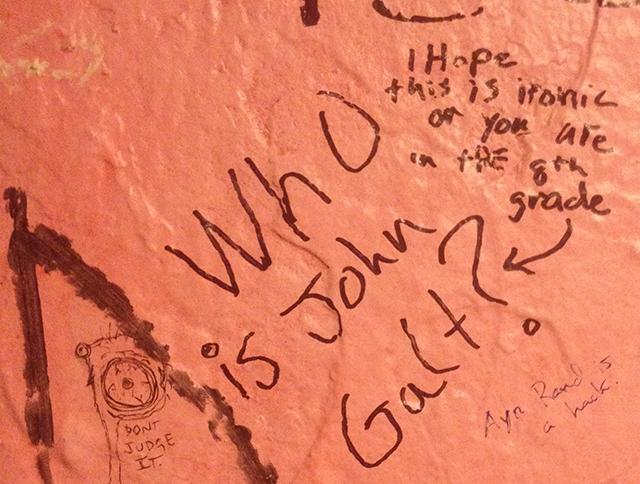 “Who is John Galt?” reads another. “I hope this is ironic or you are in the 8th grade,” writes someone else. (And, in all fairness, the John Galt scribble does have a very juvenile quality to it.) A third person piles on: “Ayn Rand is a hack.” That last one’s made in a ballpoint pen, which indicates to me that the writer didn’t walk into the restroom planning to make a mark on the wall, but was so moved to add to the conversation that he or she had to use whatever writing device was in a pocket. The original poster isn’t alone, however; the libertarian right does manifest somewhat of a presence here among the leftists. In a few other places, Alex Jones’ Info Wars media empire is touted. 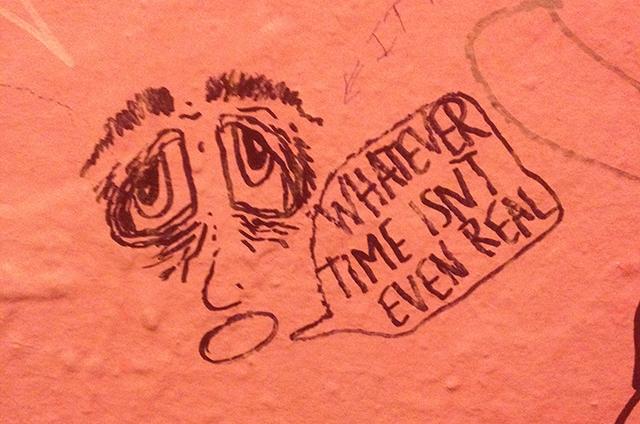 Some of the drawings are really well-done, leading me to wonder if some of the writers have artistic practices outside the restroom, too. There’s a smoking skull, telling you to “Buck up, kiddo,” meant to be viewed from sitting position. A weary, exhausted looking face emerges from the ether with the undergraduate philosophical chestnut “WHATEVER TIME ISN’T REAL.”

My favorite, however, is by the door, the last you see on the way out. It’s a demonic, suited lizard yuppie – maybe a Franken/Coleman-styled Lizard Person – flashing you a disingenuous smile. “Let’s do lunch,” he says. 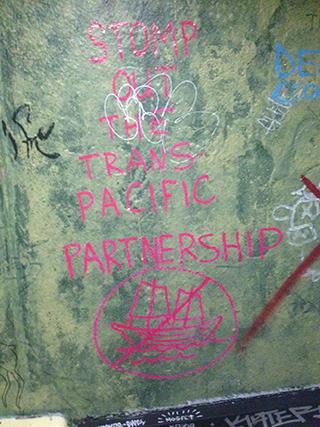 There’s not as much in the way of drawings here, though there is a Miyazaki-style fat cat uttering a Cyrillic word in a speech bubble. Two messages dominate opposite-facing walls in the other restroom: on the sink side, STOMP OUT THE TRANS-PACIFIC PARTNERSHIP, with an “X” drawn through a drawing of a trade clipper sailing west. Here, we find bathroom graffiti as a way of taking the temperature of certain segments of the electorate. On the left in particular, the issue of this trade agreement, the largest in history, has been a hot topic – see the recent back-and-forth between President Obama and Elizabeth Warren. The prominence of this message in this venue suggests that it’s a topic that’s been on people’s minds, at least on the West Bank.

On the toilet side: MARS NEEDS MOMZ. It’s hard to know when specifically this was created, but as is, it was just in time for Mother’s Day.

Bathroom graffiti is typically thought to be made up mostly of insults, jabs and bad attitudes directed to the viewer. Partially true though this may be, a lot of this graffiti also conveys good will, encouragement and empowerment to the viewer. A prominent example in here reads NOT EVERYBODY IS GONNA BE WHAT YOUR ON … STAY GOLD, with the added value of a smiling face. You’re pretty vulnerable in the bathroom, all alone, maybe feeling bad, and the writer knows this. They’ve chosen to use their audience with you to uplift, which is nice. 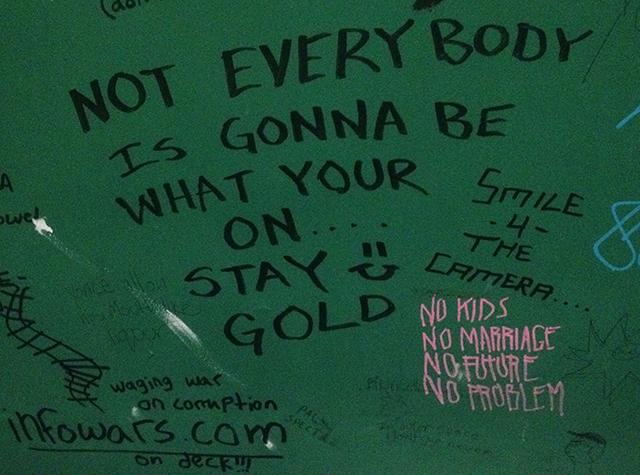 The absurdist possibilities of the form, though, are always what gets me most excited. For this reason, I love the fact that someone has written VAN MORRISON by the door. Probably not Van Morrison, but maybe a fan. 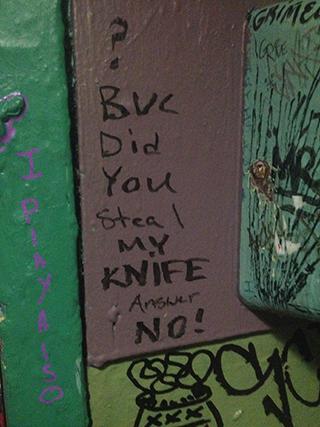 And right below it, how about this little dialogue-slash-poem:

Thanks to Keith Harris for his bathroom-related insights.