When you name your street for a grand, abstract ideal, you’re just inviting scrutiny.

So it is with St. Paul’s Prosperity Avenue. “Prosperity” is a wide-ranging, aspirational concept that’s closely tied to so many important ideas about what America is and what it should be. You can’t walk down a street named Prosperity Avenue without reading much deeper into the landscape than you would if you were walking a block away on, say, Birmingham or Etna Streets. Prosperity Avenue! A place where dreams of wealth, happiness and health come true! Every sign of struggle and poverty is magnified. Every hint of self-actualization and stability is amplified.

Which is not totally fair to Prosperity Avenue. It’s a perfectly regular little East Side street that just happens to have an extremely expansive name. If you look back through back issues of the Pioneer Press, most references to Prosperity Avenue are pretty unexciting: notices of road construction, or stories from the “Sainted and Tainted” column, an anonymous praise-and-shame feature made up of reader submissions. There are accounts of a few roadside automotive rescues (one rescuer is said to have “restored [the writer’s] faith in the East Side”), and complaints about some dirtbag stealing flowers from a woman’s garden. Just another weekday in St. Paul. 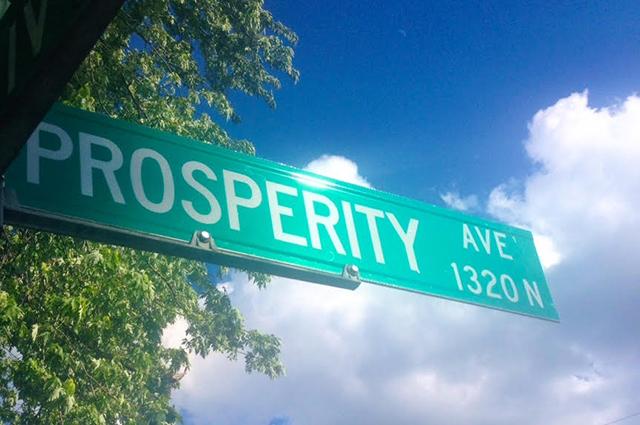 MinnPost photo by Andy Sturdevant
Prosperity Avenue is a perfectly regular little East Side street that just happens to have an extremely expansive name.

In fact, few of the businesses along the road seem tempted to take advantage of the branding possibilities in the name. There’s a Prosperity Pines apartment complex – there’s a good name for a subdivision in a David Lynch movie – but I also pass a pet-sitting service, an auto shop, a French language immersion school, an insurance broker and a gas station. None of them are named for Prosperity.

If “Prosperity Heights” sounds like the fever dream of self-improving 19th-century developer, it more or less is. The road was laid out in 1884, according to Donald Empson’s indispensible book “The Street Where You Live.” (He notes, with characteristic deadpan, that there seem to be “a typical number of banks in the neighborhood.”) The year the street was created, a writer named John Bach McMaster boasted of the young American republic that “under the benign influence of liberty and peace, there sprang up, in the course of a single century, a prosperity unparalleled in the annals of human affairs.” This was the spirit of the times, and the spirit in which this street was undoubtedly named – prosperity, though tempered by adversity, is within reach for most American citizens. Especially in good old St. Paul.

The houses on Prosperity Avenue are, by East Side standards, fairly new. They’re not spectacular. There are some nice design flourishes along the way, but the neighborhood has a certain suburban quality that I found very unexpected. There are a lot of ranch houses, which seem to have supplanted older light industrial sites. Nearby Phalen Boulevard is a quite recent addition to the area, built along an old railroad corridor, and home to a few modern, well-financed developments – mostly notably the Bureau of Criminal Apprehension complex. But as far as conventional markers of financial prosperity, there aren’t many. Prosperity Avenue will never be mistaken for Summit Avenue.

You rarely go looking for a metaphor and not find it, however. Along the way, I encountered four sites (sights?) that seemed to me, under the circumstances, to say something about prosperity. 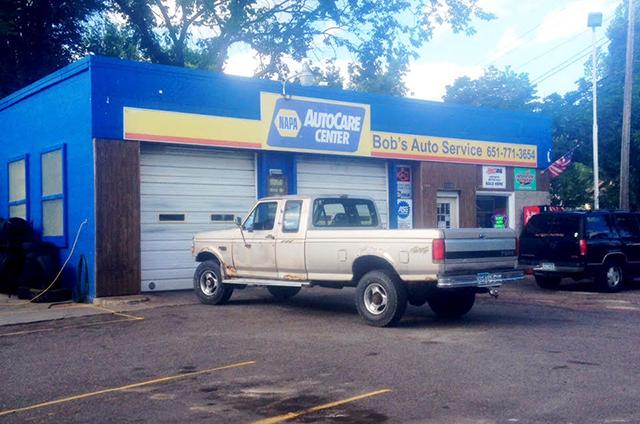 Bob’s Auto Service garage, at Prosperity and Ivy, seems by all evidence to be a prosperous business. The parking lot is filled with trucks in all states of repair. Over the course of my walk, I pass half a dozen attached garages with their doors open, neighborhood residents tinkering with their cars inside, which leads me to believe that Bob has plenty of clientele in the neighborhood to draw from. Most evident of the prosperity in question is a Winnebago Brave RV – or at least part of a Winnebago Brave, resting atop a hitch. The ultimate symbol of postwar prosperity, the RV, designed to travel the highways and byways of this great nation in eternal pursuit of warm weather recreation. I hope Bob gets to take it out sometime this summer, if it in fact belongs to him. And if the owner in question doesn’t get to take it out – well, most 19th-century writers on the topic of prosperity agreed that it is only made meaningful by its demanding cousin, adversity. 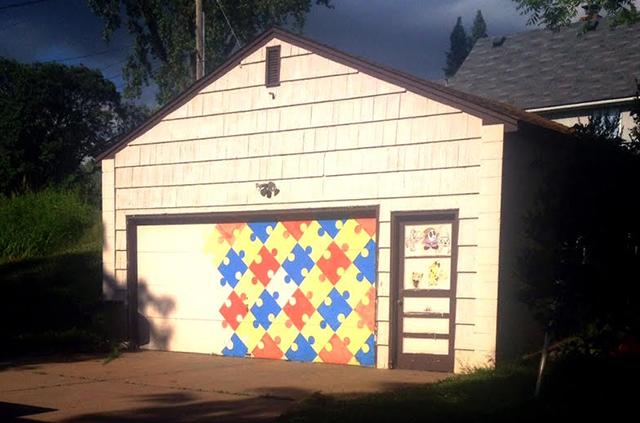 At the end of Prosperity Avenue, we find another idea of prosperity, one more closely related to the sense of it being not merely a state of financial abundance, but of happiness. While it’s true that you can’t really get a sense for a person’s inner life by the state of their house, this house sure made me happy. It was evidence of a full and engaged life on the part of its occupants. The garage is half-painted in a jigsaw puzzle design – something I wondered about being a reference to autism. From the look of the bumper stickers on the truck, it is. One sticker proclaimed the driver was the proud parent of an autistic and non-autistic child. The others also gave ample evidence of a fulfilling life – celebrating trucks, motorcycles, the north shore. On the garage door, a childlike but skilled hand has drawn a menagerie of fictional animal characters, including Jake the Dog from the cartoon series “Adventure Time,” and the ubiquitous Pokemon. A life on Prosperity Avenue devoted in part to motherhood, “Adventure Time” and motorcycles sounds pretty good to me. 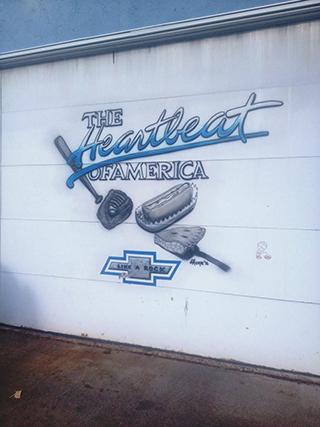 MinnPost photo by Andy Sturdevant
On the garage facing Hazelwood is a mural that depicts the
American dream at its most prosperous in stunningly literal
terms.

The third isn’t on Prosperity Avenue proper – if you follow the road up the Hazelwood, and then walk north to connect to Christie Place, the vestigial spur of the old Prosperity Avenue, you pass a house near Idaho Street. The front lawn is occupied by a sign of American postwar prosperity even more potent than the Winnebago: a silver, early 1970s Chevy Corvette, almost displayed as museum piece. On the garage facing Hazelwood is a mural that depicts the American dream at its most prosperous in stunningly literal terms. It’s a baseball bat and glove, a hot dog, a slice of mom’s apple pie, and the Chevrolet logo, accompanied by its most famous and second-most famous slogans, “the Heartbeat of America” and “Like a rock.” Mom, apple pie, baseball, hot dogs and Chevy automobiles. None of these things are particularly expensive, extravagant or flashy, but all shorthand a certain indestructible idea of what it means to be prosperous in America. I only wish the garage was located on Prosperity Avenue proper. 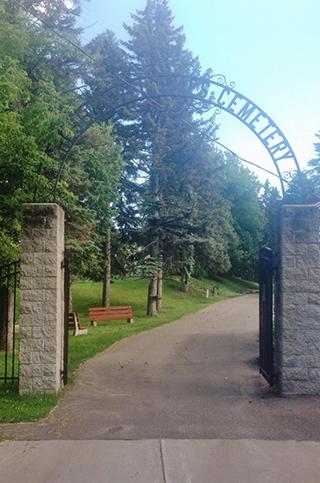 MinnPost photo by Andy Sturdevant
Prosperity Avenue ends, as all things must, in death.

Prosperity Avenue ends, as all living things must, in death. Christie Place is an odd little spur that was once part of Prosperity Avenue, and was renamed 50 years ago for reasons that are unclear to my best sources. There’s currently some house construction happening that in the sun-dappled summer light looks like it could be the set of a 1980s Spielberg suburban epic.

On Christie Place, though, is the entrance to Chesed Shel Emes (“Kindness of Truth”) Cemetery. It was built in 1912 as a final resting place for the poor of St. Paul’s Jewish community. A walk through the cemetery yields the typical markers of lives well-lived. I think my favorite was for Doris Lillian Getsug, who died in 2010 at the age of 94. “Extremely generous aunt and mentor,” her headstone reads. “Distinguished career public servant and human rights advocate. Women’s rights activist and humanitarian, pioneer in public sector conflict resolution and the Swedish ombudsman concept. A fiercely independent, kind-hearted soul, feisty, scholarly, argumentative, musical and loved by all.”

How’s that for prosperity? If anyone belongs at the head of this particular avenue, it’s Mrs. Getsug.

Prosperity Avenue: Look for a metaphor and you will find it