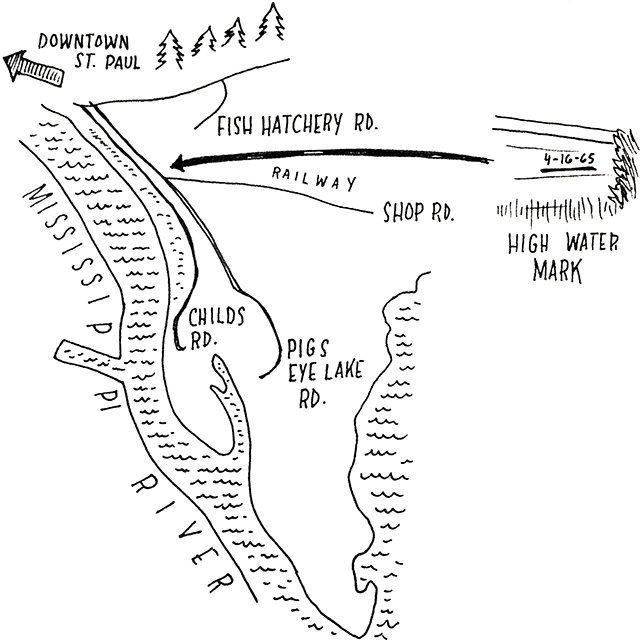 An early nickname for St. Paul was the City on Seven Hills – a lofty and aspirational motto, alluding to the glories of Rome, to be sure. But it’s also one that rightly emphasizes the city’s height. St. Paul’s most prominent landmarks sit atop two of those hills, the Cathedral and the Capitol. It’s a city of bluffs, gentle gradients and high bridges.

What are less often considered are the parts of the city below those hills. There are also lowlands, valleys and floodplains along the Mississippi River that are less visible and less celebrated. Down below the bluffs of Indian Mounds Park, on the east side of the river along a peninsula bounded by railroad tracks and a human-made lake, Childs Road runs through one of these stretches. It’s a part of St. Paul that’s long contained features of the city most people have preferred to keep hidden away from public view.

Follow Shepard Road east out of downtown, along the river, and it becomes Warner Road. Near where the river bends south and Highway 61 begins, Warner breaks off into Childs Road and Pigs Eye Lake Road. These two roads follow the east bank of the river down a lonely industrial corridor, ending just short of the spot where the Mississippi River and Pigs Eye Lake converge.

This is one of those situations where looking at a place on a map doesn’t give you much of a sense for what it’s like on the ground. Childs Road is, like the river, down low. It’s dwarfed by its surroundings. Downtown to the west and the bluffs to the east seem to tower above you, and the airplanes buzzing overhead in and out of St. Paul Downtown Airport (Holman Field) across the river further emphasize the sense of being at the bottom of a ravine.

The names give you an idea of what’s down there. Childs Road was named for James A. Child, a civil engineer for the city of St. Paul who masterminded the city sewage plant built on this site in the 1930s. It’s still on Childs Road, a lightly art deco brick structure that’s a little bit more aesthetically pleasing than the other industrial sites around it. (The St. Paul Almanac ran a wonderful piece a few years ago about a childhood visit to the treatment plant in the 1960s by Cynthia Schreiner Smith.) 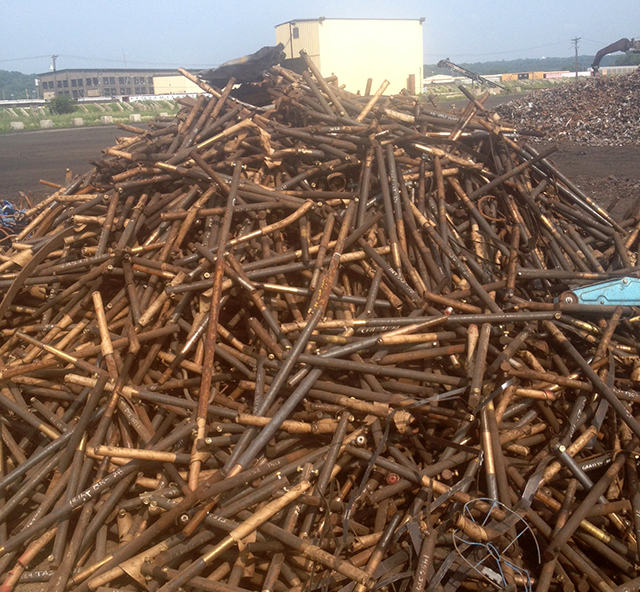 MinnPost photo by Andy Sturdevant
Piles of scrap metal on the river. They’re sorted by size, and this is the medium pile.

Pigs Eye Lake Road, of course, is named for Pig’s Eye Parrant, the legendary one-eyed brewer for whom the St. Paul was briefly named before the city’s moral authorities intervened. He spent his last days in Minnesota near this spot after being exiled from downtown St. Paul, and was booted from there after apparently losing a judge-mandated footrace with a fellow claimant for homesteading rights to the area. Pig’s Eye left for Michigan or Canada – no one is quite sure – and probably died shortly thereafter.

City sewage and exiled brewers – that gives you a fairly clear sense for what’s going on down here. 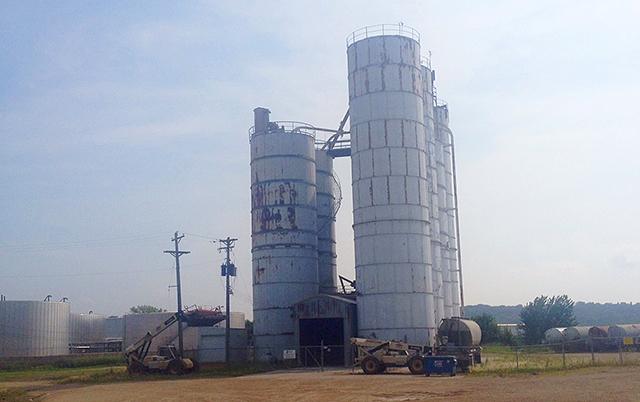 That makes it sound like a nasty spot. It’s not, especially considering that the immediate features of the area are heavy industrial sites, piles of scrap metal, the site of the old city dump, barges, railyards, and the city’s sewage facility. (The site of the old city dump is legitimately nasty, a Superfund site that’s only in the past few decades been covered by a thin layer of natural growth.) But there’s also a heron rookery nearby, and the site of a DNR fish hatchery that was once at the forefront of a failed plan to bring salmon to the rivers of the Midwest, and was a major tourist draw in the 1920s. Walking down Childs Road on a weekend, I noted that the most striking feature is not the gritty industrial surroundings, but how densely forested it is in parts, and how quiet and unpopulated it all is. The wooded areas are long said to contain hobo encampments and squatters claims, but there’s nothing like that visible on a weekend afternoon. It’s surprising to not see more dog walkers or joggers along this path.

Near the beginning of Childs Road, there’s a terrific piece of worker-created historic commemoration, brought to my attention by musician Mike Massey, who accompanied me for this trip. Maybe you’d call it civically minded graffiti, although I’d think of it more as an annotation. Along a retaining wall, someone has spray-painted the heights of three historic floods of the late 20th century. The highest, of course, is marked April 16, 1965, when the river rose to 26.4 feet. Looking around, you see how this whole area would have been completely underwater – a reminder of why St. Paulites have historically tended to live above the river, and not on it. 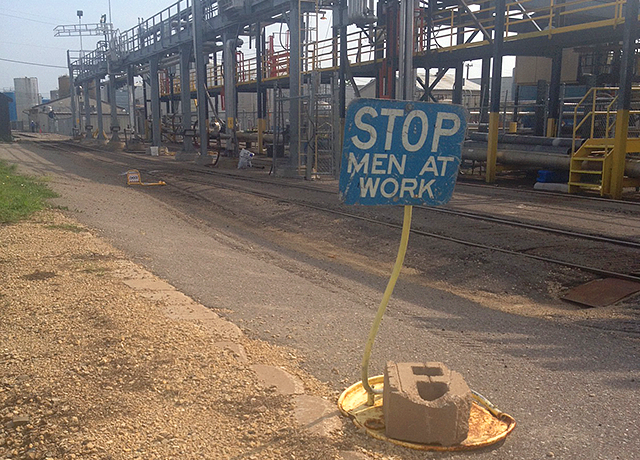 MinnPost photo by Andy Sturdevant
Men at work — during the week, anyway.

Primarily, the barges and the railroad have shaped this corner of the city. The east bank of the river is lined with a series of industrial sites that deal in the business of how cities are put together: steel, metal scrap, oil, grain, fertilizer, asphalt, cement, gravel. One is reminded of how, exactly, the Mississippi River is tied to the fortunes of global capitalism. The company names you encounter on the sides of silos and mailboxes and signs along Childs Road are national and international in scope. Westway Terminals: bulk liquid storage, headquartered at the other end of the river in New Orleans. Flint Hills Resources: refining and chemicals, based in Wichita (and, of course, owned by Koch Industries). Lafarge: cement, concrete and aggregates, headquartered in Paris, France. Gerdau Ameristeel: steel, based in Porto Alegre, Brazil.

The flatness of the river plain emphasizes the verticality of the structures that house these industries, and the piles of gravel and scrap steel that dot the landscape. There are very few spots in St. Paul with such a concentration of multinational corporations. 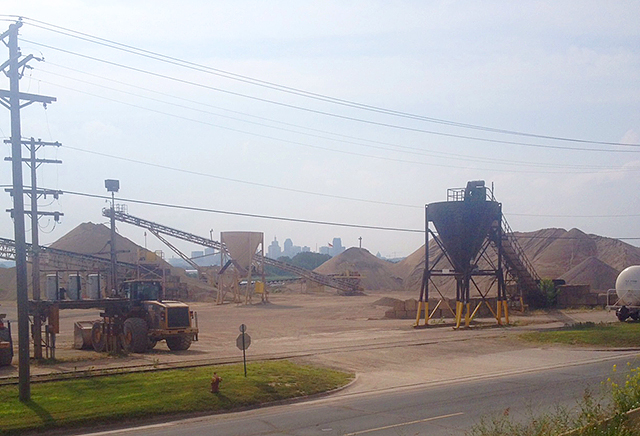 The railroad, too, involves another. Alberta-based Canadian Pacific maintains the Dunn Rail Yard further south, to the east of Pigs Eye Lake. The rail yards have recently been undergoing an expansion, one that was fought by city officials, neighbors and environmentalists last year – the noise from train traffic was a concern, of course, but also worries about those ubiquitous black train cars carrying highly explosive flammable liquids. It’s a reminder that, though these things may seem hidden from view, they’re never really entirely hidden away. 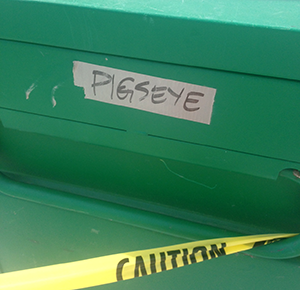 MinnPost photo by Andy Sturdevant
In any other city, this would mean a dumpster full of pigs’ eyes.

Along Childs Road, though, you’d never know it was a string of multinationals. Like the historic flooding annotation nearby, the rest of the signage around the area is charmingly ramshackle and made with an apparent comfort with the lack of public scrutiny. The mailboxes are mostly decorated with the type of vinyl address number labels you buy at Menards, or written on strips of duct tape. The ghost of Lafarge’s old sign is barely visible just under the newer one. Based on how modest the whole setup seemed, I initially assumed Lafarge was some fly-by-night, mom-and-pop operation – maybe Old Man Lafarge would come out and say hi! – and not a major global corporation headquartered in Paris. But when your site is so out of the way, hidden below the bluffs along the railroad tracks and old hobo camps and fish hatcheries and city dumps, you don’t really need to dazzle anyone.

Thanks to Mike Massey. 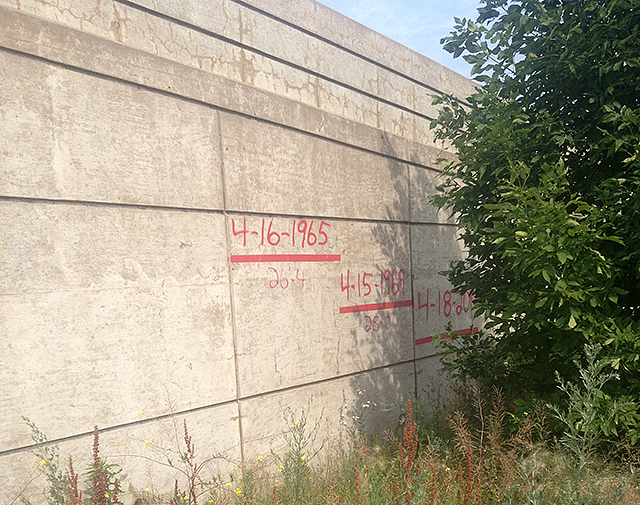 MinnPost photo by Andy Sturdevant
Flooding annotation on a retaining wall. The record 1965 floods were caused by “a combination of excessively deep frost, late winter snow and heavy April precipitation that caused rapid snow melt,” according to the DNR.