Interstate 94 between downtown Minneapolis and St. Paul wasn’t built for contemplative, rambling Sunday afternoon sightseeing jaunts in the old jalopy with your family.

It was built for the sole purpose of conveying commuters in automobiles between the two downtowns quickly and efficiently, consequences for those unfortunate communities caught in the middle or on the sides be damned.

So there isn’t much in the way of interesting sights to see along the way, unless you and your family have a particular interest in contemporary billboard design practices. There have been some attempts to aestheticize segments of it over the years – those new sound walls, for example, the ones that look like designer shipping containers stacked atop one another. But for the most part, I-94 is not a place to be admired or charmed by or even carefully regarded by the hundreds of thousands of commuters who use it every day.

There are at least two buildings along the way, however, that peek out over the sides to make themselves known in eye-catching and novel ways. To the south, there’s the glowing mural on the side of Creative Lighting on Concordia near Pierce Street. To the north, there’s the perspective-shifting facade at Flannery Construction between Pascal and Hamline. Both stand out among the fast-food signs, billboards and sound walls.

Both are designed specifically for the advantages and limitations of that site. They’re not more than a few blocks from each other between Fairview and Hamline, though they’re perched on opposite sides of the freeway.

You’ve probably seen them both a thousand times, while whizzing by or caught in traffic. Along the nine miles of freeway, they’re two of the most comforting reminders that it’s not just billboards featuring the leering faces of personal injury attorneys all the way through. 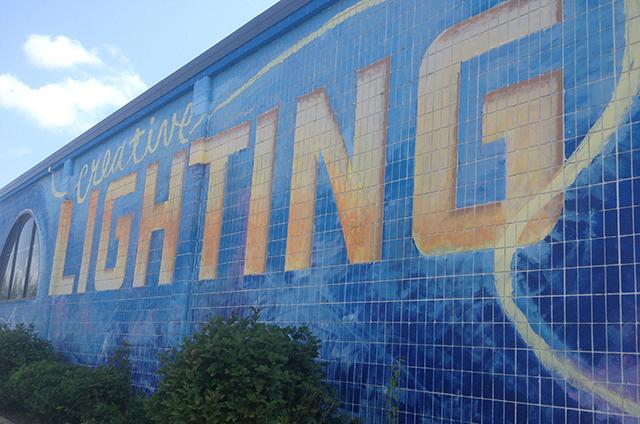 MinnPost photo by Andy Sturdevant
The current iteration of the Creative Lighting mural came about a few years ago.

The idea for a Creative Lighting mural came to owner Michael Minsberg a little over 15 years ago, while considering a type of artwork that is typically associated with Sunday drives through the country – silo and barn art. CBS Sunday Morning ran a segment on an artist whose work appears on the sides of barns throughout southern Minnesota. What works for a country road could also work for an interstate, he decided. Minsberg looked the guy up, got him on the phone, and commissioned the first Creative Lighting mural from that same painter.

The building is on a rail right-of-way, originally constructed in the 1920s to house a battery manufacturer. A warehouse was added in the ’50s, and the west part of the building, with the half-circle display windows, was built in the 1970s. Creative Lighting is a third-generation business, founded by Minsberg’s grandparents in downtown St. Paul in 1926. The business relocated to its current location on Concordia in 1970 after its old building was leveled to make way for the Civic Center. At that time, the freeway had only been constructed through Snelling Avenue. But the front of the complex presented a wide-open face to the area where the interstate would be. For many years, that face remained blank.

The murals have changed over the years. Several years after the first version, Minsberg met Minneapolis artist Chank Diesel through some friends and invited Diesel to create new mural for the wall. A working relationship was born.

Chank Diesel began his professional career as a visual artist and muralist, but in the past few years has transitioned successfully into designing fonts. His first mural for the building, from 2002, showed a yellow cartoonish figure gallivanting between representations of the two cities in a field of lamp-like flowers. An informational sign on the building described the work, and also pointed out that Diesel was engaged in a Guinness Book of World Records-bound effort to create one million pieces of art work in his lifetime. To that end, the mural was labeled #10,400.

The current iteration came about a few years ago, and reflects Diesel’s interest in typography. Gone are the figurative paintings, and instead there is the name of the store, glowing yellow and white against a blue background. The corner is signed and bears the number #16,435. 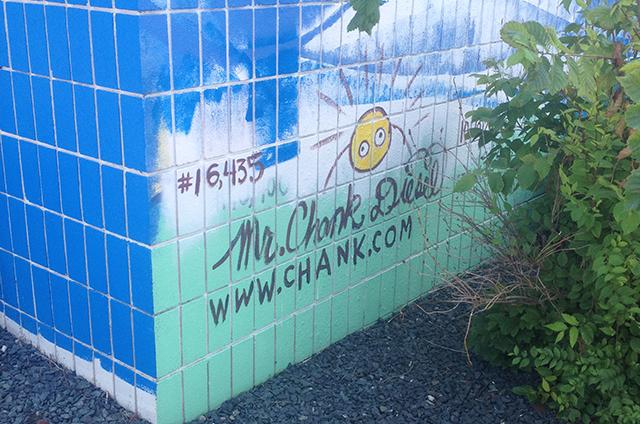 There are also striking murals on the south and west sides of the building, along the original rail right-of-way, out of sight of the part of the building facing the interstate. These are from 2010. Actually, the west side has a message just visible for St. Paul-bound travelers only: SHINE ON. Around the back is a lovely mural created with designer Anne Ulku. It’s perhaps the most philosophical statement advanced by a lighting retailer in the United States, a riff on Carl Jung by way of the Tao Te Ching: “Without darkness there is no light,” in a flowing script. 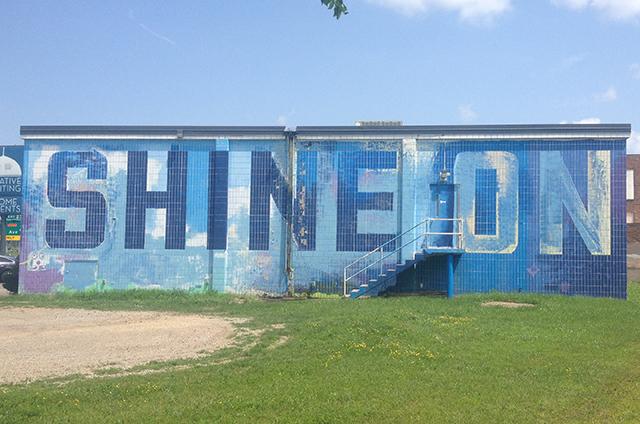 MinnPost photo by Andy Sturdevant
For St. Paul-bound travelers only

Minsberg remembers telling the artist, after the idea of extending the mural came up, “But no one’s going to see those.”

“Chank said, ‘But when the Amtrak goes by, people will see it,’” Minsberg recounts. “He’s an artist and this is his canvas.” 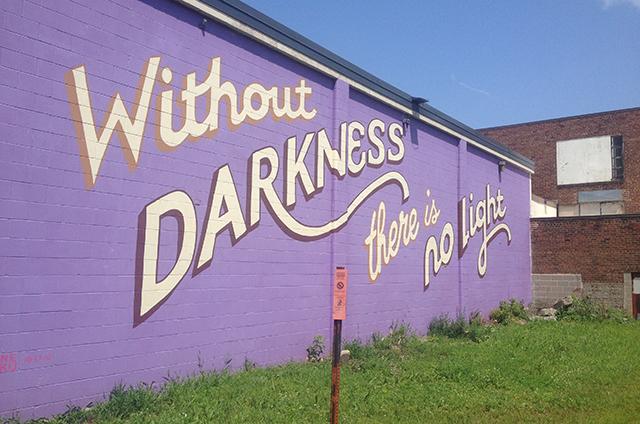 When Flannery Construction moved from Lowertown St. Paul to the Midway in 2005, on to a site overlooking I-94, president Gerry Flannery and architect Peter Kramer had a few ideas for orienting the new building in space. One consideration was for the people working inside.

“Gerry’s firm is really a St. Paul company,” says Kramer. “Many of us are St. Paulites, either from St. Paul or living here, and so when you’re sitting at your desk, you ought to be able to see the downtown St. Paul skyline through the desk windows.” Therefore, the windows should face east. Setting the windows perpendicular to the freeway would also reduce noise.

But the opportunity for orienting the building in an interesting way to the tens of thousands of commuters on that freeway was another consideration. “It’s very site-specific in the sense that it’s on this moving river of cars, all traveling at the legal speed limits of 65,” says Kramer. “Or occasionally faster.”

Starting with these ideas, Kramer and Flannery designed a lenticular façade on the building – one that would appear to be a series of abstract shape to an automobile passing by at normal speed, but would arrange themselves to spell out “FLANNERY” from another angle. You find lenticular designs in printing quite often, like those novelty buttons that appear to move when you wiggle them around. Kramer expanded the scale of that idea to be experienced from an automobile. It works, too. I never fail to get a little thrill from it when I’m stuck on a bus crawling past Snelling. Approaching the façade, you see green, orange and neutral-colored geometric shapes on concrete panels. Continue past, and the name of the company materializes into view into either bold, green letters (from the east) or gray letters on an orange and green background (from the west). It’s a neat way to make use of the particulars of the site. 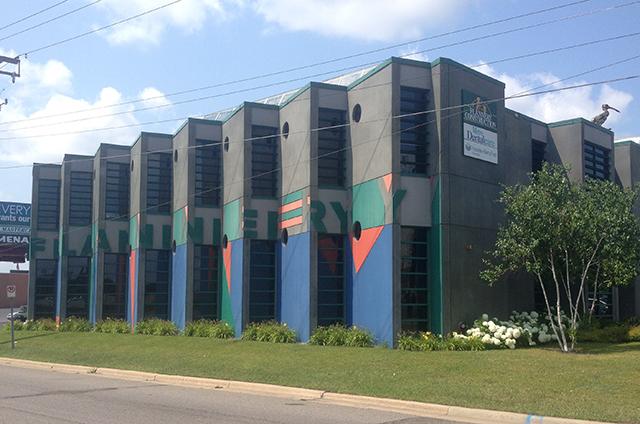 MinnPost photo by Andy Sturdevant
Kramer and Flannery designed a lenticular façade on the building – one that would appear to be a series of abstract shape to an automobile passing by at normal speed, but would arrange themselves to spell out “FLANNERY” from another angle.

If you’re underneath the building, on St. Anthony Avenue, you get a general sense of the illusion. But it doesn’t really work unless you’re viewing it from 94, and traveling at automotive speeds. I asked Kramer and Flannery how they lined everything up. Did it involve mathematical equations?

No, of course not. They built a cardboard model. “We set it up and walked past it, to make sure we had the colors in the right place. What you do with any piece of art — look at it from any angle, and not just straight on.”

(Incidentally, the building also has round portals that add to the sense of movement, and act as a sort of sundial inside the building. Like the “Shine On” mural on Creative Lighting’s building, this aspect is only visible to drivers fortunate enough to be heading toward St. Paul.)

“There was some concern that it would affect drivers,” says Kramer. “But since they’re all talking on their phones now anyway …”

One last notable artistic element on the building is a sculpture by the late Chicago artist John Kearney. It’s a metallic pelican, made of car bumpers, sitting guard eternally over the entrance. It was a gift of the Minneapolis ophthalmologist Dr. Malcolm McCannel, who died in 2013 at age 96. He was an art collector, and also Flannery’s first client. He and Kramer met working on a project at his house. When Flannery moved into the new building, Dr. McCannel thought the building should have something on it.

“We’ve had a few carpool groups get in touch to settle bets about which type of bird it is,” says Flannery. Imagine the heated carpool debates about that bird over the years. You have to have something to look at and think about when you’re stuck in rush hour traffic on I-94. The freeway doesn’t give you many opportunities for that sort of reflection and consideration, but there are at least a few out there.