Part one of two articles

The “History of the Decline and Fall of the Roman Empire” makes it sound like a pretty attractive set-up.

“The Tyber rolled at the foot of the seven hills of Rome,” wrote historian Edward Gibbon in his famous account of the early years of the Eternal City. “On that celebrated ground the first consuls deserved triumphs, their successors adorned villas, and their posterity have erected convents.” Seven hills in that river valley, home to seven different tribes, band together to create the greatest city in the history of the world between them. Triumphs! Villas! Convents! Who wouldn’t want to follow suit?

To claim seven hills is a way to draw a parallel between your own burgeoning establishment and the glories of Rome, to say “We, too, deserve triumphs, adorn villas, and our posterity will erect convents.” Or museums and city halls and statues and churches and all the rest of the things that make a great city.

Among this number, of course, you also have St. Paul, Minnesota. “The city on seven hills,” columnist Gareth Hiebert (aka Oliver Towne) called it. He used that designation, in fact, as the title of a collection of his essays about the city.

You know St. Paul has hills; that’s one of the features most often used (including many, many times by this writer) to distinguish it from its flatter westerly twin. The thing no one agrees on, exactly, is which hills those are.

The tricky thing is, the concept of seven hills doesn’t perfectly match the topography of St. Paul. If you look at a map of the city, you can certainly see hills, but many of them aren’t particularly distinct, and several seem to be part of the same system of hills or bluffs. From St. Clair Avenue running northeast along I-35 to the Cathedral, for example, there’s a bluff or ridge that could reasonably be said to encompass St. Clair, Crocus, Ramsey, Summit and Cathedral Hills. Plus, at least two original hills aren’t there anymore at all. And a century of high-rise construction has dwarfed many of the original summits. It’s tough to point to seven nobs on the map and say, ah, yes, there are exactly seven hills here.

However, there is a broad consensus for most of the hills. I’ve got at least two solid sources. Oliver Towne’s seven hills were Baptist Hill (now Mears Park), Capitol Hill, Cathedral Hill, Ramsey Hill, Dayton’s Bluff, the West Side generally, and St. Clair Hill, generally where the Linwood Community Center is in the Summit Hill neighborhood.

Even Seven Hills Benefit Partners, an employee benefits services company located in downtown St. Paul, offers an opinion. On the “About Our Name” page, they indicate that the seven hills are Dayton’s Bluff, Cathedral Hill, Capitol Hill, Crocus Hill, Prospect Park, Williams Hill and Mount Airy. Internet chatter on blogs, forums and elsewhere seems to indicate some mix of these seven. (Except Prospect Park, which is of course in Minneapolis. I’m not sure how that got there.)

I visited five of the hills that most sources claim to be among the original seven hills. As far as the identity of the other two, we’ll investigate the remaining six candidates next week and see how things look from the summit.

Well, clearly this is the most Roman of all of the city’s hills, a parallel Oliver Towne was not shy about making in a 1974 column: “St. Paul’s Tiber is the Mississippi, toward which all the city flows,” he wrote. “Its ‘St. Peter’ is the Cathedral of St. Paul, capped with a huge Romanesque dome of copper that dominates the skyline.” Maybe a little grandiose, but essentially true. In fact, if you stand atop the stairs leading to the front of the Cathedral – especially as the bells are ringing on a Sunday morning – it does feel like you are surveying the whole city from a position of almost mystical authority. 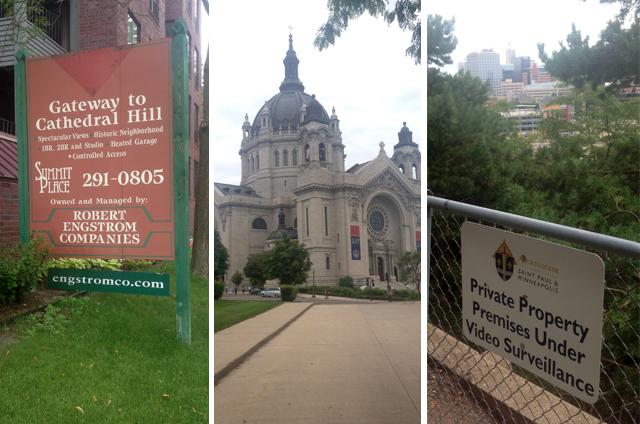 MinnPost photos by Andy Sturdevant
This is the definition of a good hill: You can see everything around you when you stand on top of it, and you can see it from below just about anywhere else.

Before the Cathedral was built in 1904, this was called St. Anthony Hill, owned by a farmer in the days when being way up on a hill wasn’t necessarily an attractive option. The first cable cars changed that, connecting downtown with the crest of the hill, and a few years later, two parishioners stepped in, purchased the land, and donated it to the Archdiocese.

In fact, the grand staircase isn’t even the best vantage point on the hill. If you wander over Summit Avenue, into the parking lot of the offices of the archdiocese, you get a panoramic view of the range of bluffs that overlook I-35 and the river. The signs would seem to indicate you’re not really supposed to poke around too extensively, though, so if you get caught, don’t tell them I sent you.

Oliver Towne took the Roman connection a step further, referring to Capitol Hill and its approach along John Ireland Boulevard as the city’s Forum. I’m less certain of that, since a forum is supposed to be an open, broad and expansive place to meet people, and every time I’ve ever walked from Cathedral Hill to the Capitol, the only people I tend to meet are bearing down on me at 40 mph behind the wheel of a car.

But the eternally dual-orbiting civic suns of the Cathedral and Capitol is the great masterstroke of St. Paul’s sense of itself. Capitol Hill is less of a visible rise than the Cathedral, but it’s still prominent enough to give a very fine view from the steps. This is especially true if you lock your gaze with the Cathedral, and consider that John Ireland Boulevard runs between them, named for the archbishop whose political and spiritual influence on the city was unparalleled – he himself ran a direct line between the affairs of the church and the affairs of the state. St. Paul could really be the City Built on Two Hills, for these two in particular. Though that’s much less dramatic a historic reference, it’s a much truer sense for how the city worked for much of its early existence.

I once tried to bike up Third Street from Kellogg Boulevard, and almost died of a heart attack when I reached the top. Every road in the Dayton’s Bluff neighborhood seems somehow to rise slowly and steadily, no matter what direction you’re coming from, and there are any number of spots in the area that seem to constitute a summit – the Dayton’s Bluff recreational area, the dead-end Frank Street, the corner of Wilson and Maple. Every way is up in Dayton’s Bluff. 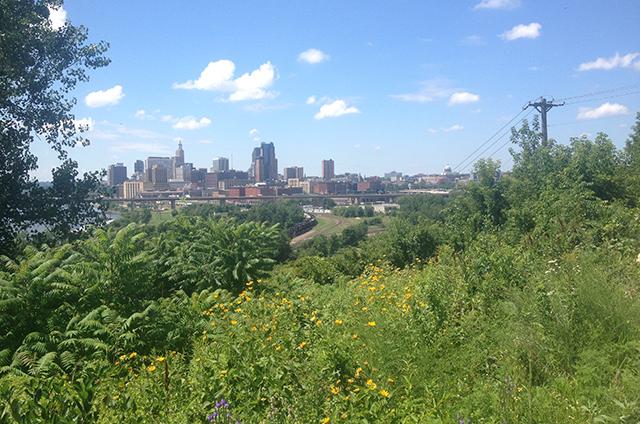 MinnPost photo by Andy Sturdevant
Every road in the Dayton’s Bluff neighborhood seems somehow to rise slowly and steadily, no matter what direction you’re coming from.

The view from Mounds Boulevard, though, is maybe the best point from which to can see the sweep of the river valley, and the many hills around it. From this vantage point, the Capitol building and the Cathedral are the two most prominent hills – or at least their height is emphasized by the domed buildings atop them. The other hills are harder to spot. Crocus and Ramsey Hills seem visible, but they get lost in the wide sweep of bluffs along the highway.

I hate to be nitpicky, but I am not sure Dayton’s Bluff is a “hill,” exactly. It’s more of a series of hills that rise along a steep incline. Whether that’s a “hill” or not is completely subjective, it turns out. The United States Geographic Survey, as reliable an authority as you could have on the subject of what a hill is, says on its website that “broad agreement on such questions is essentially impossible, which is why there are no official feature classification standards” regarding hills, mountains, bluffs or other protuberances from the earth. Which means it’s a free-for-all. 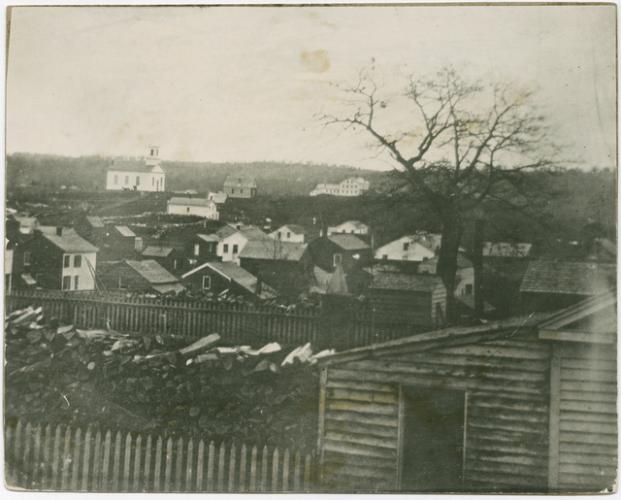 Courtesy of the Minnesota Historical Society
Baptist Hill in the 1850s 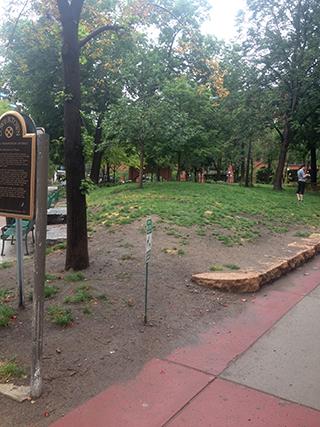 Where? This isn’t a hill here anymore, and hasn’t been for 130 years. It’s now Mears Park, in Lowertown. “Baptist Hill” started as a nickname and became codified over a few decades; the hill was originally called Mount Pisgah, after the Jordanian peak in the Old Testament to which Moses ascended and saw the Promised Land. There was a Baptist church there in the 1850s, hence the name, and then after the church relocated a few blocks away, a city workhouse. By the 1880s, the land had been graded and it had been made into a city park. Though there’s nothing approaching a hill, even by the most generous definition, there are a few gentle nubs here and there in Mears Park today. The most notable is by the corner of 5th Street and Wacouta. You can stand up at the top of that one and look down onto the artificial stream that gurgles by in the warmer months. Based on historical photos, the hill doesn’t seem to have been that high, so perhaps you’re not that far off. 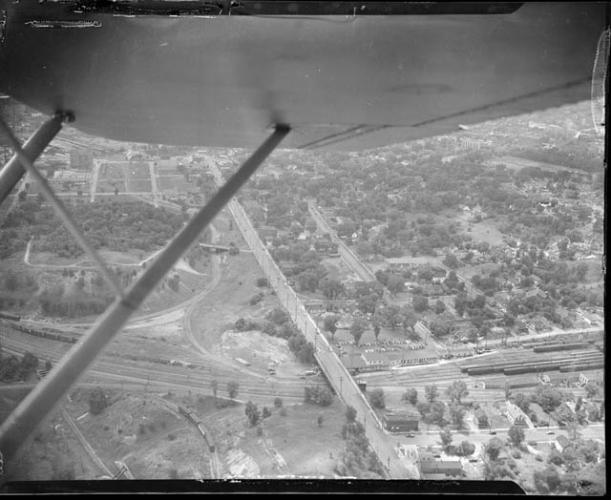 Courtesy of the Minnesota Historical Society
Looking at this photo from the Historical Society’s holdings of an early 20th-century flyover, Williams Hill does indeed look exactly like we might expect a hill to look like.

And last of all, poor Williams Hill, the second of the missing hills, and perhaps the one with the saddest story. Looking at this photo from the Historical Society’s holdings of an early 20th-century flyover, Williams Hill does indeed look exactly like we might expect a hill to look like, the kind you’d find illustrated in a children’s picture book. It rises on all sides, and seems to be covered up the sides with houses and buildings. 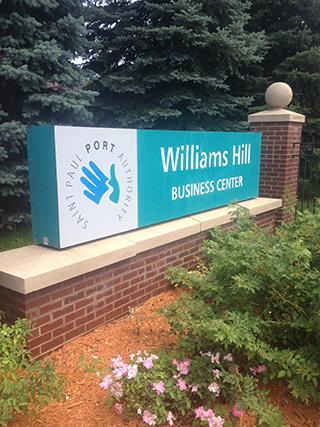 MinnPost photo by Andy Sturdevant
With no hill left, Williams Hill today is a sort of sorry scene.

Williams Hill today is a sort of sorry scene. The site is now roughly to the right of 35E, to the east of downtown St. Paul, where it splits off from I-94. It’s the home of the Williams Hill Business Center, a very nondescript concrete strip mall whose cheerful teal sign seems almost to be a mockery of the clearly and obviously missing hill, a sort of cruel joke. But still, it’s a vast improvement from what was on the site prior to that, a brownfield left over from decades of dismantling the hill for gravel. By the mid-1980s, it was a series of lumpy, polluted brown deformations. Williams Hill was one of the city’s earliest graveyards, and a now-vanished 19th-century rooming house called the Swedish Castle. By the end of the hill’s life, it was home – according to a popular column by Don Boxmeyer at the Pioneer-Press – to a hermit named Chester, who carved out a meager existence in some abandoned structures before being spirited away to a veterans home.

All that said, the Williams Hill Business Center does smell great – St. Agnes Bakery is located in one of these buildings and the scent of fresh bread often wafts out over the parking lot.

St. Paul’s 7 hills: There seems to be agreement on 5 of them