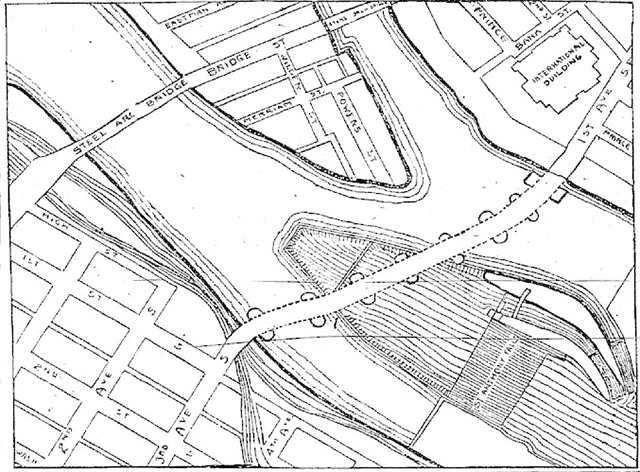 Minneapolis Tower Archives
A 1914 illustration from the Minneapolis Tribune showed the future location of the bridge.

Even for people who’ve lived in Minneapolis for a long time, it’s a common thing to see the Hennepin Avenue Bridge and 3rd Avenue Bridge side-by-side and assume that the Hennepin is the older and the 3rd Avenue the newer. I thought this for years, before I ever really stopped to take a close look at the dedication plaque on the Hennepin Bridge that clearly states it opened in 1990, and realized all those patinated green suspension cables were mostly for show. The 3rd Avenue Bridge, all poured concrete and relatively free of ornament, seemed to me like something a gang of Robert Moses disciples in short-sleeved dress shirts and pocket protectors tossed up in the 1960s.

Which is, of course, is completely unfair to this very fine bridge, and shame on me for not looking closely. In fact, it’s one of the very oldest street bridges on this part of the Mississippi by some distance (the Stone Arch Bridge, built first for trains and now carrying bikes and pedestrians being an obvious exception). When you drive over it regularly, all the concrete supports and sweeping arches below you, it’s easy to take for granted what a great view of the city it provides. But that great view was a big part of the plan in the first place.

The 3rd Avenue Bridge opened on Flag Day in 1918, after two years of construction through some of the coldest winters in memory. Recently, the City of Minneapolis completed digital scanning of the so-called “Tower Archives,” a host of archival photos from City Hall that had gone uncataloged for decades. Among these were nearly 140 images of the construction of the bridge. One can follow the entire process, from the initial digging and foundation work to constructing the spans and the nearly completed structure. 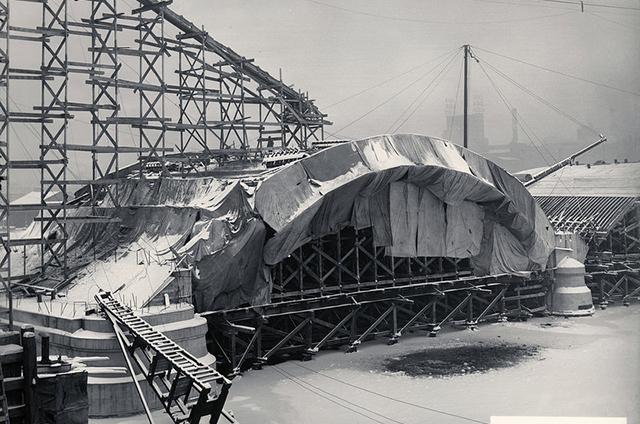 Minneapolis Tower Archives
Bridge construction took place during some of the coldest winters in memory.

At the time, the Tribune wrote that the reinforced concrete would be “practically everlasting,” and a century on, it wasn’t far off the mark. It’s amusing and a little disorienting to see such a familiar set of forms take shape in a hazy industrial landscape that has either vanished or been transformed. 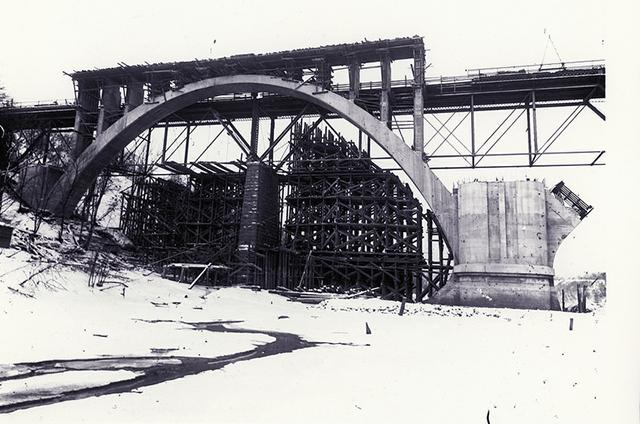 __description__
The Tribune wrote that the bridge’s reinforced concrete would be “practically everlasting.”

The dominant form and theory in civic engineering and city planning was City Beautiful, and the bridge takes its design cues from that high-minded and idealistic movement. It’s self-consciously reserved, orderly, imposing. While there is a lot less ostentatious ornamentation than there is on bridges that came later (the Robert Street Bridge in St. Paul, for example), those long arches impart a sort of civil dignity. And some of the sightlines are terrific: Looking from under the supports on West River Parkway, a few castle window openings reveal a long, cascading view of the undergirding of the bridge. 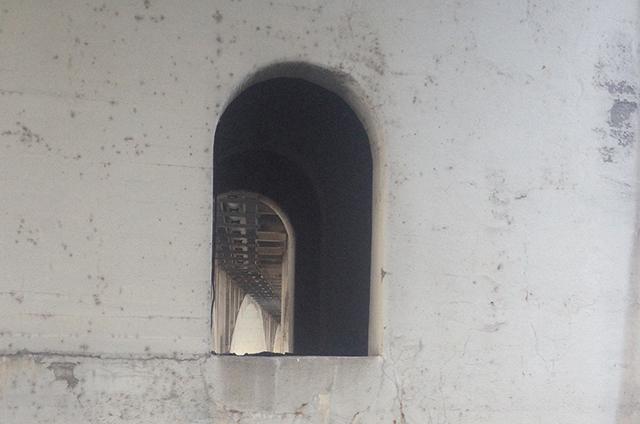 MinnPost photo by Andy Sturdevant
A few castle window openings reveal a long, cascading view of the undergirding of the bridge.

But really, the bridge was not designed to feature delicate and interesting decorative work to be lovingly inspected from afar. The designers knew such a thing wasn’t necessary, as the main attraction was going to be the views of the Falls of St. Anthony, viewable right below the deck of the bridge. The span supplied its own panoramic vistas, and not much additional aesthetic meddling was necessary. “Those features of the new bridge will make it of interest to tourists who have only a few hours to spend in Minneapolis, and who know nothing about the technical work of bridge-building,” predicted the Tribune.

That technical work was challenging. The bridge was needed to connect what was known then as the East Side and West Side – what we know now as Old St. Anthony and downtown, respectively. Third Avenue on the west and Central Avenue on the east had become major commercial thoroughfares, and connecting them through the heart of the city seemed the most obvious route. The problem was that route went right over the Falls of St. Anthony.

This met with some opposition from the industries who depended on the falls to power the mills. The underlying structure of the falls had been famously meddled with for decades – aprons, supports, canals – leaving parts of the limestone fractured and susceptible to further damage. There was some concern that a bridge carrying thousands of commuters would weaken the limestone and destroy the falls entirely.

So the engineers worked out a solution. You’ve noticed, while walking or driving over the bridge, that the design follows a subtle S-curve. This is to follow the portions of the rock below that were less damaged, and allows the arches to rest on the sturdiest parts of the underlying rock. 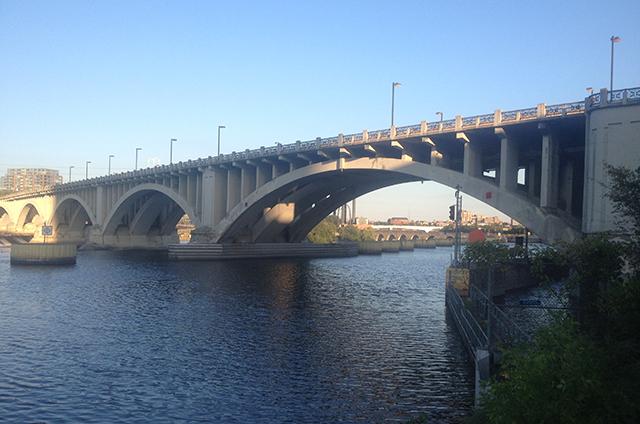 MinnPost photo by Andy Sturdevant
As impressive as the falls were, the bridge’s position right in the heart of the then-bustling milling district would also give visitors a platform from which to witness the unstoppable industrial might of the city up close.

And as impressive as the falls were, the bridge’s position right in the heart of the then-bustling milling district would also give visitors a platform from which to witness the unstoppable industrial might of the city up close. “Not one [other American bridge] gives the visitor a closer view of condensed and highly specialized industry,” continued the Tribune in one of its first accounts of the bridge plans. “The world does not contain such another manufacturing center as that around the Falls of St. Anthony.”

Besides a sterling example of civil engineering, the bridge was meant to be a platform – a literal platform – from which to view the city. So many of our iconic views of the city’s skyline come from bridges that would have been mostly inaccessible to Minneapolitans a hundred years ago. Bridges over the river in the 19th century were rickety wood and steel affairs. They weren’t places to hang out and enjoy the falls. This bridge was different. The headlines trumpeting the bridge didn’t focus primarily on the ease of use or the connectivity or the achievement of modern engineering. Instead, they focused on the aesthetic: The bridge would “add wonder to the historic waterfall already made famous.”

The bridge opened on Flag Day – Friday, June 14, 1918. Flag Day was a new holiday dreamt up by Woodrow Wilson in the patriotic fervor that accompanied the First World War. The intersection of modern engineering, patriotic displays and civic might made for quite a day. The local chapter of the Red Cross arranged for “an English canteen service … on the plan of those conducted at the present time in England, where a quick lunch can be had, simple and tasteful, ice cream and popcorn ‘popped.’ ” The bridge was dedicated by a group of aldermen and engineers led by a bagpipe band, a stagecoach drawn by four black horses with nine pioneer women on top, and finally, 20,000 local schoolchildren in 30 massed units carrying American flags.

That night, “the monolith lighting standards [were] illuminated for the first time,” and there was a military dance held under the arches. It was closed to regular vehicular traffic, but “the motor corps of the Minneapolis chapter of the Red Cross will conduct visitors across the bridge all day for a small fee.” 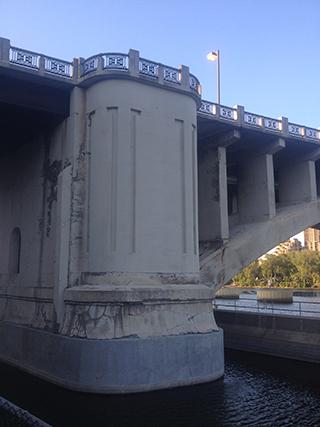 MinnPost photo by Andy Sturdevant
The observation parapets are quite a bit nicer than those on the Stone Arch, as they were built for the express purpose of standing on and taking in the view of the skyline and the mills and the natural beauty of the falls.

The city wasn’t shy about encouraging people to come out and see this “new and unsurpassed view of the falls, the milling district and the downtown skyline.” Not just some people – everyone. “It is the expressed wish of the aldermen that every citizen of Minneapolis cross the bridge sometime during Flag Day,” read official reports (emphasis mine). Not all of them made it, but a huge percentage of the city’s population did.

The observation decks on the Third Avenue Bridge remain popular places for tourists, walkers and others to stop and look at the skyline. The bridge has been, perhaps, supplanted somewhat by the Stone Arch Bridge and the Hennepin Bridge as a preferred destination, but the view of the falls remains excellent. In fact, the observation parapets are quite a bit nicer than those on the Stone Arch, as they were built for the express purpose of standing on and taking in the view of the skyline and the mills and the natural beauty of the falls. Every time you stand there, you’re fulfilling that early mandate of the city’s civic and industrial leaders. They’re sending you a subtle message, saying, “Hey, look at how prosperous and beautiful this place is. Enjoy the view.”

3rd Avenue Bridge: Built (in 1918) not to be seen but to showcase the Falls of St. Anthony