The story of contemporary art in any American city is inevitably a story about real estate. The production of art requires large amounts of inexpensive space, good sources of natural light, and access to a centralized hub for socialization with others. Coincidentally, these are also the things that make for attractive, upscale living quarters, and so artistic centers of gravity tend to coalesce over several years around cheap, often sparsely populated areas, and then dissipate when developers move in, the neighborhood becomes too expensive, and the condos and stadia go up. This is vastly oversimplified, but you’ve heard this basic story from your artist friends in the past.

This is a pretty old story. This is more or less what happened in the Warehouse District in late 1980s and early 1990s, and – depending on whom you talk to – it’s slowly happening in Northeast Minneapolis and Lowertown St. Paul right now. But the narrative goes back quite a bit further than you might imagine. The first major artistic center of activity in Minneapolis dates to the turn of the last century, about 1900, and it follows a number of strikingly familiar patterns.

Hennepin Avenue south of Washington Avenue was, in the late 19th century, a residential district. People lived there, in houses and a few mansions along the road, before it became a major thoroughfare. One of them was Robert Koehler, a German-born painter who owned a building at 719 Hennepin Avenue. He lived at that address for a while until moving to Loring Park, but maintained a studio there from 1893 through 1903. This space is currently occupied by the entrance to the parking garage at Bar Fly, just to the left of the old Skyway Theater marquee.

Koehler was, without a doubt, the most famous artist in Minneapolis from the time he arrived in 1893 to his death in 1917. He was born in Hamburg, had grown up in Milwaukee, and had studied in New York City and Germany. In 1893, he was hired to head the Minneapolis School of Fine Art, a fledgling and somewhat itinerant institution that was then located at the public library, two blocks away on 10th and Hennepin. He would also be one of the founders of the Minneapolis Institute of Art in the 1910s, and instrumental in the establishment of the State Arts Board in 1907.

It was largely women who brought a contemporary art culture to Minneapolis. Twenty-six of the Minneapolis School of Fine Art’s 28 first-year students were women. Most of the artistic community’s early leaders were women, as well. There was less delineation between fine art, craft, and applied arts at that time – many of these women were painters and sculptors, but many were also illustrators, woodworkers, ceramics artists, furniture makers and textile artists. Social clubs, guilds and groups with names like the Studio Club and the Chisel and Chalk Club, formed for the purposes of the discussion of fine art as it was practiced in Europe, and also practical instruction in art and craft technique, had been happening since the 1860s. It was during the 1890s that many of these organizations and practices were formalized – by that time, the city was both populous and prosperous enough to support cultural activity of this kind. There was need for a common space for the artists to work, collaborate and socialize. Koehler’s property at 719 Hennepin served that purpose nicely. 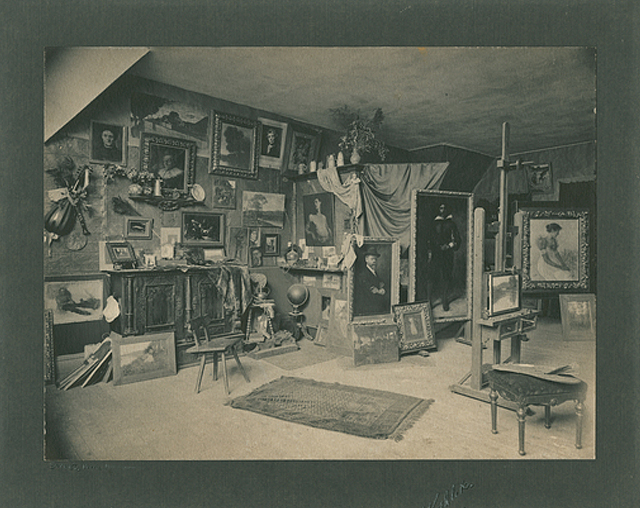 Courtesy of the Minnesota Historical Society
Studio of artist Robert Koehler, Minneapolis, circa 1900.

The building was known colloquially as the “Old Bandbox.” When Koehler moved to Loring Park with his new bride, Anna, in 1895, the Studio Club moved in to occupy the vacant space. Koehler kept studio space there, but there were also studios and exhibition spaces for traveling shows from the East. The Tribune described the interior of the building in 1893 in this way: “The studios are pleasantly arranged with plenty of light to relieve the dark coloring in hangings and furniture. The reception room is deep maroon, admirably serving as background for paintings disposed in tasteful fashion around the walls. The light falls from a deep-set skylight.” Open space and light: the two things a painter most needs.

The Bandbox was a local echo of a trend that had begun in New York only a few decades earlier – the contemporary notion of a loft studio didn’t really appear until the 1850s. A description of the contents of New York painter William Merritt Chase’s curio-packed studio – “plaster masks, tents, Japanese umbrellas, a stained-glass window, an incense lamp, crucifixions, Indian drums, a Turkish coffee pot, velvet drapes, pistols, and a bronze bust of Voltaire” closely matches the curio-stuffed images we have of the Bandbox studios. 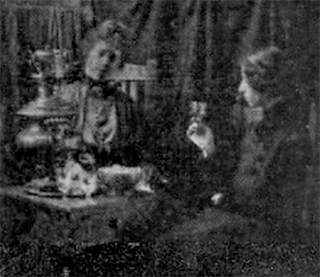 As much as the Bandbox studios were a place for work, they were also a place for hanging out. The beverage of choice for artists of this period was tea. An artist in the building named Burt Harwood had first brought an elaborate Russian-style samovar to the building’s common area. A samovar at this time would have been a mark of cosmopolitanism, an eccentric affectation that set the building’s artists apart. Two resident artists, an Englishwoman and former nurse named Elisabeth Chant and her friend Margarethe Heisser, took over the samovar, making it the social hub of the local arts scene. “An informal ‘clearing house’ for arts information,” is how historian Michael Conforti described it, “where those concerned with the community’s need for craft instruction as well as studio and professional space could gather, providing a forum for the discussion of contemporary social and aesthetic issues at the same time.”

The extant photos of the interior – the skylight, the samovar, the curtains, the curios and relics and paintings on the walls and in the cabinets – wouldn’t look totally out of place in a studio in any Northeast location you’d care to name.

The first exhibitions by local artists in the city’s history were staged here. The Bandbox’s exhibition spaces also put Minneapolis on the map, so to speak, as a destination for traveling art shows. You may recognize the more-than-slightly defensive tone in the Tribune’s 1895 coverage of an exhibition of avant-garde French poster art: “It will be the first time that an exhibit such as the big Eastern cities are continually offered has considered coming to the West, and the promoters are carefully watching the success of the present Studio Club show, as they maintain the West is not ready for the showing of a collection like this.” The Bandbox and the artists who worked there were willing to say to the world that the West was ready. The work the Bandbox and Studio League artists undertook were directly responsible for long-lived institutions like Mia and the Minneapolis College of Art and Design.

By the turn of the century, however, the character of the neighborhood was changing. Hennepin was becoming less of a residential district and more of commercial district. As prominent as the artists working in there were locally, their status couldn’t save them from the area’s shifting landscape. 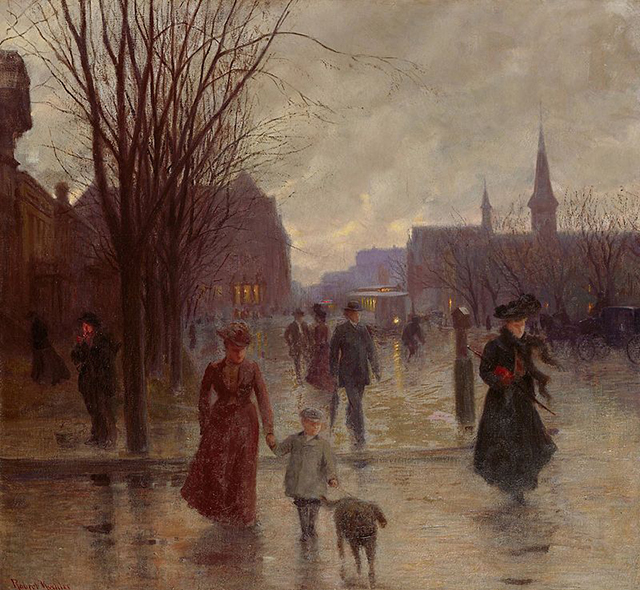 Wikimedia Commons
Koehler’s well-known painting of Hennepin Avenue near the Bandbox from 1902.

In its place, a developer built some low-rise buildings that would house an auto garage, a funeral parlor, and an assortment of other commercial businesses. One of these buildings remains – the currently vacant salmon one with the twisty fire escape at 705 Hennepin. In a truly bizarre historical irony that should not go unremarked upon, this property was owned and developed by none other than T.B. Walker, the lumber baron who was showing artwork in his downtown mansion nearby, and would eventually transform that private collection into the core holdings of the future Walker Art Center.

Many of the artists and arts organizations that had occupied the Bandbox moved a few blocks south to a brand new building built for them by culturally attuned philanthropists in 1907, the Handicraft Guild, which still stands at Marquette and 10th. This was a short distance that nonetheless would have put them by contemporary standards on the edge of the suburbs. Though the building’s heyday as a destination and center for gravity in the Minneapolis art scene only lasted through the early 1920s, artists worked in the Handicraft Guild building for generations.

In fact, a group of them were recently evicted. There’s an 18-story apartment tower going up over the old building.