“It’s been a long time since there’s been anything like this,” a photographer tells me, looking on as a Delta 737 touches down on a runway several hundred yards away. Several of us are looking out past a 6-foot security fence onto the south parallel runway, as seen from the new viewing area at Minneapolis-St. Paul International Airport (MSP). For the first time in years, the Metropolitan Airports Commission has designated a dedicated viewing area inside the airport proper, located on Cargo Road off Cedar Avenue. It’s a project that restores an important part of the local aviation experience, lost for several years post-9/11.

There’s long been an interesting relationship between the airport and public spectacle, both in America generally and in the Twin Cities specifically. For much of the 20th century, the airport was more of a place for looking at planes than boarding them. Today, at least 83 percent of Americans have flown on a commercial airline at some point in their life. But as recently as the mid-1960s, that number was closer to 35 percent, and even lower in the decades before. At that time, a ticket from New York to Los Angeles – one that you can get today for about $200 – would have cost the equivalent of $1,400 in today’s currency. A quick weekend getaway was not economically feasible for most people. In the year 1965, only one in 10 Americans traveled by commercial airliner. 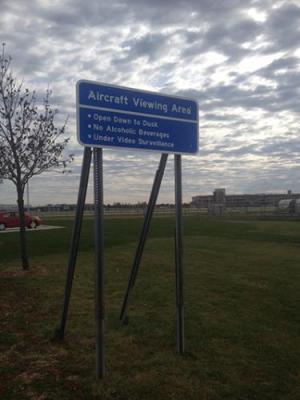 MinnPost photo by Andy Sturdevant
Based on the number of people out at the viewing area, even over the lunch hour on a weekday, people are still crazy about aviation.

Those other nine Americans were content to come out and just see the spectacle in person. MSP began its life in the years after World War I as a few runways handling airmail flights, built far outside the city limits. It was constructed on the site of an abandoned oval circuit motor speedway that was supposed to make Minneapolis “the Indianapolis of the West,” but had closed abruptly in 1917. There was a huge amount of enthusiasm for air travel early on in the Twin Cities. In 1923, when Speedway Field was officially rechristened Wold-Chamberlain Field – after the aviator scions of two local captains of industry killed over France during World War I – 7,000 spectators showed up to see an “aerial parade” of 12 planes flown in from all over the United States. The florid coverage of the opening day’s events in the Minneapolis Journal boasted of the Twin Cities’ preeminence as an air hub, and reported that the airplanes flying in formation over the field were “roaring a strident song that told citizens of the new flying field.” (Nearly any citizen of south Minneapolis in the intervening 90 years can tell you all about that particular roaring, strident song.)

Spectators turned out in large numbers consistently to watch in the years after. In fact, at Wold-Chamberlain Airport, the grandstands from the old speedway were around as late as the 1930s, giving onlookers a (somewhat precarious) perch from which to view of arrivals and departures. By the time the first international flights were being made in the early 1950s, the airport had opened a dedicated observation deck in the old Blue Concourse (now Concourse E). It drew 264,000 visitors its first year – a quarter of the total number of passengers the airport served. “Kids would come out there on their bikes and they’d stay out there all day,” recalled airport employee Dorothy Schaeffer a few decades later. “I used to have to pop popcorn for the popcorn machines.”

“It was just jammed on Saturdays and Sundays,” she added. “People were crazy about aviation then – they always have been.”

Based on the number of people out at the viewing area, even over the lunch hour on a weekday, people are still crazy about aviation. Two demographics are heavily represented: families with kids, and photographers. When I visited, one kid had been whipped into such a frenzy by the 737s that he was buzzing along the fence with his arms outstretched, trying to will himself into the air. (It’s for this reason that “take your kids to the airport” has long been a standby on lists of free things to do with your kids.) A steady stream of photographers, most with zoom lenses, come and go over the course of an hour. 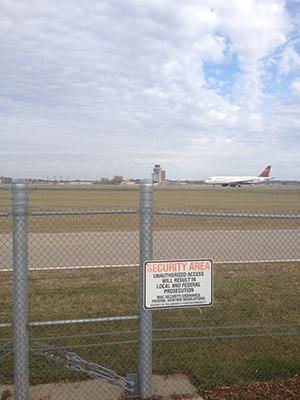 MinnPost photo by Andy Sturdevant
The viewing area is surprisingly deep inside the airport.

The viewing area is surprisingly deep inside the airport. You enter on Cargo Road from Cedar Avenue, and twist around past Sun Country Airlines’ offices and the Fed Ex Ship Center, under two tunnels, further into the heart of operations than it seems you ought to be able to go. It’s accessible by foot, too, via a sidewalk, though as any local pedestrian knows, walking this sort of route requires a certain fearlessness. The previous best place for observation, in the cellphone lot on Post Road, was just on the southern edge of the airport, and the vantage point put the air traffic above your head. The new observation area puts you in the center – airplanes aren’t roaring in overhead, but coming in and taking off at regular intervals all around you.

The area is pretty Spartan – a few picnic tables and park benches, nothing fancier than what you’d find at an interstate rest stop. A lot less fancy, in fact. Trees are planned for a second phase, but there’s nothing particularly romantic about the setting itself. It is a deeply romantic spot, but it’s just that all the romance and aesthetics are on the field. Even with all the negative contemporary associations with air travel – security theater, invasive screening procedures, carbon emissions – the engineering marvel that makes flight possible is still something to behold in person. 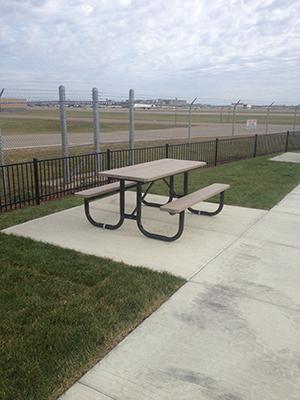 MinnPost photo by Andy Sturdevant
The area is a lot less fancy than a highway rest stop, in fact.

It’s called a viewing area, but sound is a large part of the experience, as well. You can’t really hear it when you’re inside the plane, but when the aircraft touch down, there’s a thrust reversal that increases the volume of the engines markedly upon landing. Even as a longtime resident of south Minneapolis, one who’d imagined he’d heard all the sounds an airplane can make, I found it a much more dramatic experience. It’s a reminder of how rarely, in the past decade-and-a-half, one actually gets anywhere close to “airside.”

The high modernist flourish of Terminal 1’s folded plate roof are visible off in the distance, as is the tram line connecting it to Terminal 2. But no one’s really there to see those things. “The planes,” writes Hugh Pearman in his 2004 book “Airports: A Century of Architecture,” “are as valid a part of the airport’s architecture as any of these buildings. They are also, in some ways more permanent.” He specifically points out the Boeing 737, a common sight on the MSP runway. That particular model has been around since the late 1960s, and is based on an even older design. With proper maintenance, the lifespan of a commercial aircraft can be 20, 30 or even 40 years. That’s much older than most parts of MSP.

If a traveler from the 1960s visited the airport today, he or she would barely recognize the building, which has changed enormously in that time and remains in a nearly continual state of renovation. But if they came out to the viewing area, they would still recognize many of the types of aircraft arriving and departing. The building on the ground is, in some ways, much more ephemeral than the airplanes it serves. Those airplanes are what people are there to see, and what people have been coming to see since Minneapolis-St. Paul International Airport was a few wooden hangars surrounded by a racetrack.