Crossing the John A. Blatnik Bridge from Superior into Duluth, you can see Minnesota Point to the east – a thin ribbon of trees and houses that stretches just under the horizon line, water below and water above. It looks, from a distance, like an optical illusion. Clearly there’s a bustling, inhabited peninsula there, but must be a wider than it looks from this perspective, you think.

It’s not. Minnesota Point – otherwise known as Park Point – is a true geographic peculiarity that looks in person like it does on a map: very narrow. From downtown, you cross over Duluth’s most iconic structure, the Aerial Lift Bridge, which puts you on South Lake Avenue. After a few hundred feet, South Lake merges into Minnesota Avenue. That single road carries you the entire length of the spit, for about 4½ miles, with a row of buildings on either side for much of the way. Most of the spit is less than 200 feet across. This thin little ribbon of land separates the harbor from the open waters of Lake Superior. Minnesota Avenue takes about an hour-and-a-half to walk all the way down, but you’re never more than a minute’s walk from the harbor side to the lake side. Technically, it’s an island, since the canal separates it from the mainland. It’s reputed to be the longest freshwater spit in the world.

You remember that scene in “Twin Peaks” where Special Agent Dale Cooper is sitting in the bar, dips his hand into the bowl of mixed nuts, and methodically places them all into rows? Minnesota Point is sort of like the neighborhood equivalent of that. It’s like someone took a typical city neighborhood with 1,500 residents, scooped it all up, and then took every single structure in that neighborhood – every house, park, store, church, hotel, playground and community center – and set them all side-by-side, in two neat, 4-mile-long rows along a single road. (The artwork of Ursus Wehrli is perhaps also a good reference point – I thought of his photo of a poolside scene, with all the objects rearranged into a tidy row.) The cross streets are named numerically from 8th Street to 41st Street, though I’m not sure you’d really call them “cross streets.” They don’t cross Minnesota Avenue so much as connect it perpendicularly to the beach on the northeast side of the spit. 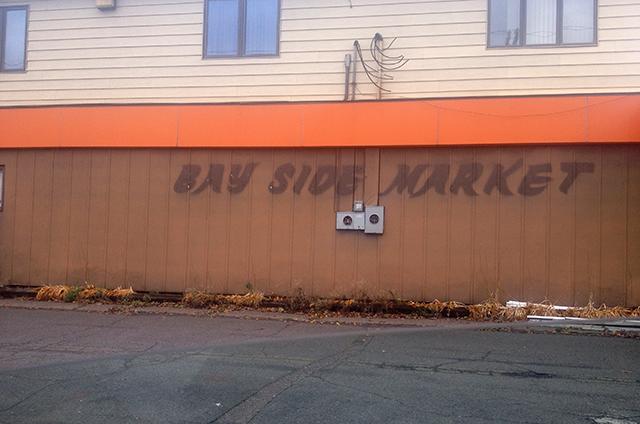 MinnPost photo by Andy Sturdevant
It’s like someone took a typical city neighborhood with 1,500 residents, scooped it all up, and then took every single structure in that neighborhood – every house, park, store, church, hotel, playground and community center – and set them all side-by-side, in two neat, 4-mile-long rows along a single road.

The sort of architectural diversity that might be multilayered in a typical neighborhood is instead sitting side-by-side. Even with just the residential buildings, you have an enormous variety – midcentury ramblers, Queen Anne cottages, rustic cabins, the sorts of New England-style Greek Revival mansions you might see in reruns of “The Ghost and Mrs. Muir,” and metal-and-glass modernist boxes. All of these might be sitting within a block of one another.

The neighborhood is steeped in maritime culture. Private homes proudly display anchors, life preservers and other islander-themed decorations, and more than a few of them have private docks out back. The two churches on Park Point, St. Andrew’s-on-the-Lake Episcopal Church and Our Lady of Mercy Catholic Church (affiliated with St. Mary Star of the Sea, back on the mainland), both draw a number of visual connections to maritime culture. Most striking is St. Andrew’s stained glass window, setting the events of the Gospel of Matthew on Lake Superior, what appears to be the Old Standby Lighthouse shining in the distance. 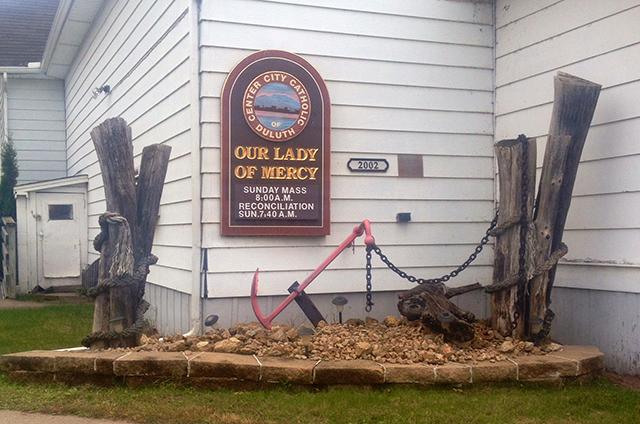 MinnPost photo by Andy Sturdevant
Our Lady of Mercy Catholic Church draws a number of visual connections to maritime culture.

The Duluth harbor is already one of the best-known and best-loved vistas in the state, but looking past this single row of houses and seeing the industrial superstructures just behind them is a reminder at how commerce shapes the infrastructure and identity of a place. Park Point has room for only one sidewalk, and it’s a great place to walk down and see the various facets of Duluth arranged neatly into one visual buffet. The harbor side and the lake side are quite radically different from each other – not just in terms of what you find, but even in the quality of the water and the waves coming in. On the harbor side, you see numerous personal docks, small craft, and the occasional enormous cargo ship and commercial shipyards in the distance, the economic engine that has powered the city for 150 years. Turn your head in the opposite direction and you see Lake Superior receding into the endless distance, the freshwater sea. Park Point is the narrow ribbon that stands between them. 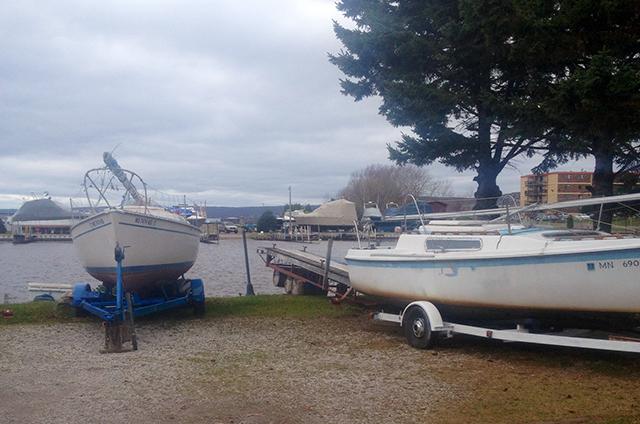 MinnPost photo by Andy Sturdevant
On the harbor side, you see numerous personal docks, small craft, and the occasional enormous cargo ship.

And of course, there’s the matter of the end of the spit, which contains both an old-growth pine forest and – most inexplicably to me – an airport. Sky Harbor Airport, which serves both light aircraft and seaplanes, operates a single runway. At first a sand runway, and then sod, the paved runway was built in the 1960s when the city of Duluth took over. Minnesota Point must be the only island in Minnesota served by air, boat, automobile, footpath and public transit – the Duluth Transit Authority’s #15 bus rumbles down Minnesota Avenue every hour during the workday.

Because Minnesota Point is one of the oldest neighborhoods in the city of Duluth, it’s grown in that idiosyncratic, organic way that old neighborhoods do – where a vacuum, no matter how oddly shaped, is eventually filled. As with many neighborhoods of this kind, there are small, quiet places the rest of the area has grown around. Most interesting is at the very, very end of the spit, past the forest and the airport. Here you can find the remains of Point Zero, the original lighthouse on the harbor, and of a buoy depot dating from the early 20th century, which stored supplies. Built in the 1850s, and only used for about 30 years, the lighthouse is decaying (as is the depot), but both are sturdy enough to investigate up-close. There are all sorts of connections to the rest of the region that are very unlike those in most of the rest of the state. 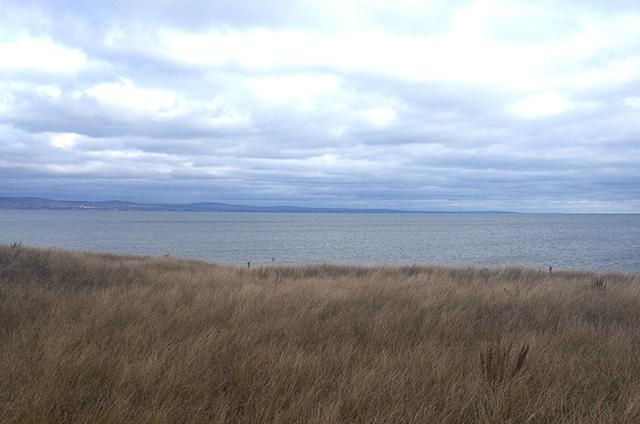 MinnPost photo by Andy Sturdevant
Turn your head in the opposite direction and you see Lake Superior receding into the endless distance, the freshwater sea.

The “point” in Minnesota Point was identified by Henry Bayfield of the British Navy, and his “zero point” was the site of the lighthouse. The bricks were brought in from Cleveland, no doubt over Great Lakes shipping routes – Duluth’s trading partners and peers aren’t, as in the rest of the state, flat, inland plains cities like Omaha, Fargo and Kansas City. It’s Cleveland and Buffalo and Toronto and other lake ports, which is perhaps why walking Minnesota Avenue feels very unlike anything you might find in the rest of Minnesota.

Duluth wears its maritime roots on its sleeve all over the city, but it’s on Park Point where you really see what that looks like up close, surrounded on one side by a harbor and on the other by a freshwater seascape.

On Park Point, facets of Duluth are arranged neatly in a long, thin row