Most Twin Cities streets don’t have very exciting origins stories. Not from a historic or nomenclatural standpoint, but from an experiential standpoint. There are no dramatic entrances or statements of purpose, for the most part. Mighty Lake Street just sort of decides it doesn’t want to be Minnetonka Boulevard anymore on its way past Lake Calhoun and Lake of the Isles. University Avenue is so long most people can’t quite picture either terminus (Blaine and Lafayette Street, incidentally). Nicollet Avenue quietly strolls out of Hennepin Avenue a few blocks from the river, and then goes to die in a cul-de-sac in Burnsville. Most others are similarly inauspicious.

At least one St. Paul street, however, has a quite distinct point of origin. Snelling Avenue – a four-lane trunk highway, a major transit route, and often (erroneously) said to be one-half of the busiest intersection in Minnesota – begins its first half-mile crawling a windy, uphill path through an undeveloped slice of bluff connecting West Seventh Avenue and St. Paul’s West End with Highland Park. The stretch of Snelling is so completely incongruous with the rest of the street as it’s typically experienced – twisty, wooded and quiet, whereas the rest is wide, arrow-straight and always busy – that I thought it merited some investigation.

The area around Lower Snelling Avenue down here is referred to by St. Paul historian Donald Empson as a “ghost park,” created less through conscious cultivation and development than the fact that it was on too steep an incline to really do much with. McDonough Park was named for St. Paul’s mayor in the 1940s, one of a long line of St. Paul-born midcentury Irish-American mayors. Snelling Avenue’s historic origins are first as a Dakota route, and then as a trading connection between the old Fort Road and the French-Canadian community in present-day Little Canada. By the 1930s, most of it was designated as a state highway, and it was paved in the middle of the decade. In the intervening decades, it’s become the quasi-urban, quasi-suburban arterial road it is today.

At least north of Edgcumbe Road. South of that, you might as well be winding through a forest out past the county line. It’s a little broken-off piece of pre-modern landscape from a time when St. Paul was all forested bluffs. Most of the rest of Snelling is as straight as a cruise missile, barreling through the urban landscape. This meandering portion stretches around the topography of the bluffs, taking at least two pretty sharp 45-degree turns on its way up the side of the hill. 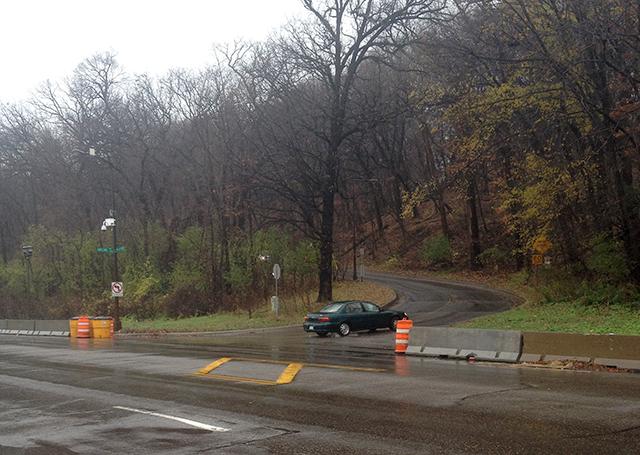 The signs above and below warn you before entering that it’s a “narrow winding hill,” and posts a 20 mph speed limit. Additionally, there’s no sidewalk. Not really until you get to the school zone around Highland Park High School. That’s true above, and that’s true below on West Seventh. If you choose to walk up the bluff along Snelling, you do so at your own peril.

The funny thing is, despite this fact, it’s clearly a heavily used route by pedestrians. There are a few clues to tip you off. First of all, if you look at Google Street View, right on the east side of the road there’s a man ambling along, either foraging or picking up litter alongside the road (not an uncommon sight, despite the “No littering” signs at both entrances to this stretch of road). That man is a sort of avatar for the intrepid St. Paulite determined to make use of this particular route; on my own ascent through the forests of Lower Snelling, I encountered no fewer than seven other people on foot. This may not seem like a particularly large number, but it’s actually far more than I’ve encountered in certain St. Paul neighborhoods on clearly marked and well-tended sidewalks. Most of these seemed like they were high school students from nearby Highland Park – teenagers are the shock troops of pedestrianism, able to mobilize faster and push further past nearly any barrier. 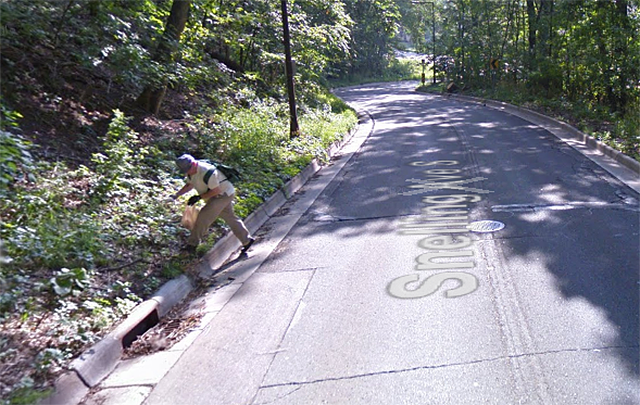 Google
If you look at Google Street View, there’s a man ambling along, either foraging or picking up litter alongside the road.

The woods of McDonough Park around Lower Snelling Avenue provide a barrier against adult meddling, I presume, and I got the sense a lot of the area was occupied mostly by teenagers, either taking a shortcut to the buses that run along West Seventh. Or perhaps they’re just escaping the quiet orderliness of the neighborhood above. We had some woods behind my high school, too, a similarly undeveloped little parcel of land hemmed in between developments. Every high school should have some woods behind it. Someone has spray-painted a safety orange smiling face onto the end of a felled tree along the road. Teenagers? A rogue road crew? Hard to say.

There is a foot path beaten alongside Lower Snelling, and while it’s not the kind of path I’d necessarily recommend for a casual hiker, as a link between two neighborhoods, it’s not bad. There are a few stark reminders, though, of the risk one takes on these sorts of bucolic roads – there is a crucifix, rosary, American flag and bouquet of silk flowers tied to a traffic sign. It’s not clear if it memorializes a motorist or a pedestrian, but it’s not hard to imagine either scenario. 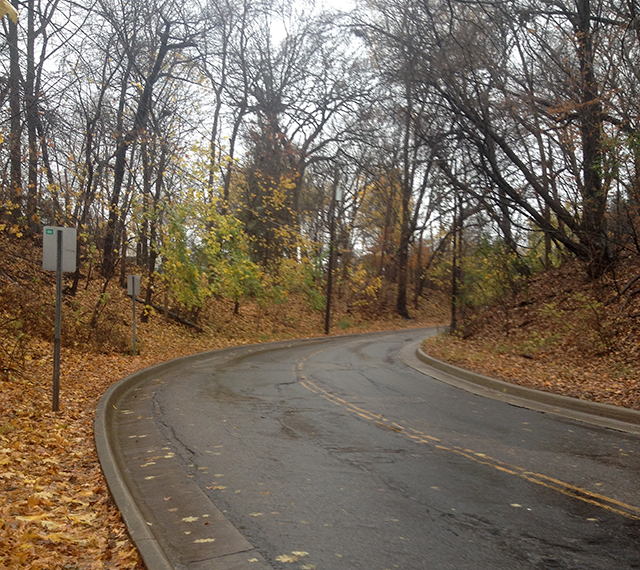 MinnPost photo by Andy Sturdevant
The woods of McDonough Park around Lower Snelling Avenue provide a barrier against adult meddling.

Risks aside, I don’t blame the various people on foot traveling alongside, though – Lower Snelling is not only picturesque and a pleasant sylvan throughway in an unexpected place, but undeniably convenient. It links up the city’s oldest continually used road with a large neighborhood and major transit route.

Really, the whole area seems like a great location for a stairway – a twisting, gently elevating stone or wood set of stairs that would give pedestrians a pleasant view of this unusual stretch of road, and provide safe access for high school students wanting to go hang out at Mickey’s Diner, located nearby on West 7th. Something similar to the staircases on Walnut or Lawton Streets, both further east up the same bluff.

Maybe someday. Until then, if you’re using this path, look out for pedestrians and/or oncoming traffic, enjoy the foliage, and marvel at the fact that there’s at least one stretch of mighty Snelling Avenue that plays country cousin to the rest of the road’s urban-via-the-suburbs personality. 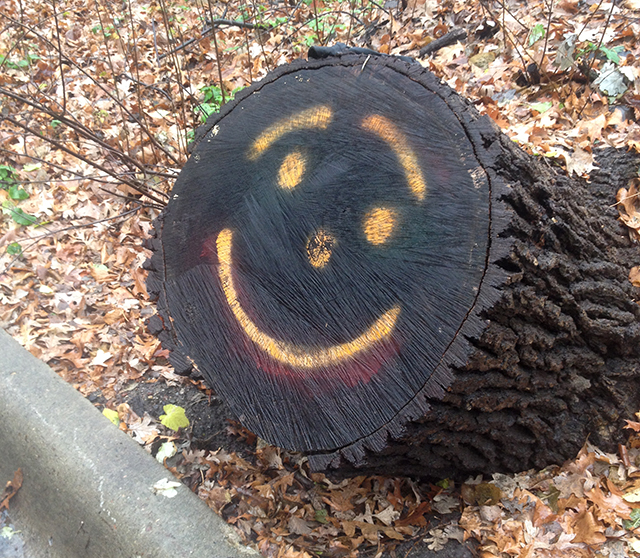 MinnPost photo by Andy Sturdevant
Someone has spray-painted a safety orange smiling face onto the end of a felled tree along the road.