Those old newspaper writers sure had a way with hyperbole. Consider this passage from a 1922 issue of the Tribune, describing a certain seven-block stretch of road on the edge of downtown Minneapolis.

Some streets, like the old Washington Avenue, are born great. Some, like Hennepin Avenue, achieve greatness, while others have greatness thrust upon them.

Such a street is Harmon Place, whose completed widening this year is its recognition, its diploma, so to speak, of membership in the great business streets of Minneapolis.

Harmon Place? You may know it, especially if you’re a student at either Minneapolis Community and Technical College or the University of St. Thomas business school – Harmon Place connects the two campuses. But it’s hardly what we’d call now a great business street. Especially compared to Hennepin Avenue, a block away, it’s exceptionally quiet. 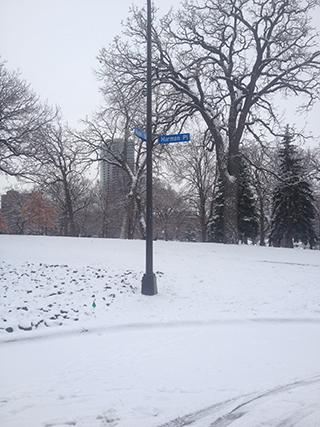 Harmon Place splits off of Hennepin Avenue near Loring Park, and then runs parallel with it for several blocks, terminating at 10th Street. The aforementioned Tribune article calls Harmon a “sister street” to Hennepin, and in many ways, it seems accurate. Harmon Place is very wide, much more so than the other smaller streets around Loring Park, like Yale or Laurel. Harmon Place seems built for a volume of traffic it is no longer asked to handle.

This was indeed the case. Walking down Harmon Place today is like examining the outcome of the push-and-pull of the demands of modernity, and how cities adapt to them. Industries, residential patterns and economic systems change quickly, leaving only traces behind, and we find the residue of all of these things along Harmon Place: early suburbs, mansions and wealth, and especially the rise and decline of a certain facet of urban automobile culture.

For roughly the first half of the 20th century, Harmon Place was the automotive center of the Twin Cities. If you wanted to buy a new car, you went down to Harmon Place. The automotive trade began on Hennepin in the early 1900s, and by the early ’20s, had migrated a block over to Harmon Place. In 1922, the street was widened to accommodate the garages, showrooms and dealerships that were popping up, and by that time, Harmon Place had overtaken Hennepin as the city’s Automotive Row. Numerous auto-centric businesses were located along this stretch of road – not just distributors of national brands like Oldsmobile and Dodge, but also long-forgotten regional automobile manufacturers like the Anderson Electric Car Company of Detroit, the Midland Motor Company of Illinois, Minneapolis’ own Twin City Motor Company, and the Kissel Motor Car Company of Wisconsin, maker of the KisselKar, the “all-year car.” 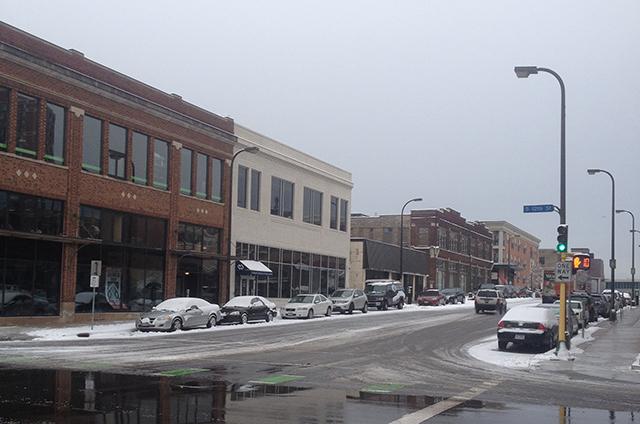 MinnPost photo by Andy Sturdevant
For roughly the first half of the 20th century, Harmon Place was the automotive center of the Twin Cities.

Harmon was well positioned to absorb this extra traffic. It had begun as the rustic road abutting the farm of its namesake, Allen Harmon, an early resident of the city. Harmon adjoined a stretch of forest known as the Washington Yale Woods, near what would become Central Park (later Loring Park) in 1883. In the late 19th century, it was a mansion district – the Alden Smith House, now housing the Wells Family College Center at Harmon and Spruce, gives a taste of what the housing in this area looked like. This was a particularly wealthy area, and attracted early residents for the same reasons it would attract automotive dealerships a few decades later – it was out in the sticks, well outside the industrial morass of the milling districts and slums of the center city. The city grew fast, though, and by the early 20th century, apartments for some middle-class strivers began to appear. The Kenosha apartment block on 12th Street, now home to the Buca di Beppo, is a good example of this type of building.

The concentration of wealthy residents was a big plus for the nascent auto district. In the same way one finds the Jaguar, Range Rover and Porsche dealerships in the wealthier precincts of the west metro adjacent to I-394 today, the target market for the auto dealerships was not the vast majority of commuters living in the city’s streetcar suburbs. Automobiles in the 1910s were more specialized – unreliable in winter months, more a handmade novelty for hobbyists and dilettantes. And, of course, they were very expensive.

By the early ’20s, however, a variety of factors had made the automobile more accessible to the middle class. Consumer credit was increasingly available for financing. Mass-produced designs were more reliable. The morass of unfamiliar names, though – Anderson, Midland, Kissell – is a testament to the hustling pre-Big 3 era of American automotive manufacture, an era in which scrappy, small-time manufacturers vied for marketplace supremacy. It was a lot easier to buy an electric car in Minneapolis in 1920 than it is a century later.

Most of the buildings along the way were built for the auto industry in the late ’10s and ’20s. The designs of the brickwork are elegant, but not too flashy – the sort of sturdy, vaguely stylish decoration you might expect of an industry transitioning from making luxury goods to everyday ones. The Knoblauch building at 12th Street is a particularly attractive one – limestone medallions of the state flower, the lady slipper, and a “K” decorate the corners. Now forgotten, that “K” stands for for Knoblauch. Anton and Hattie Knoblauch were real estate developers who had worked their way up from the cobbling trade to own and develop a number of properties, including this one. 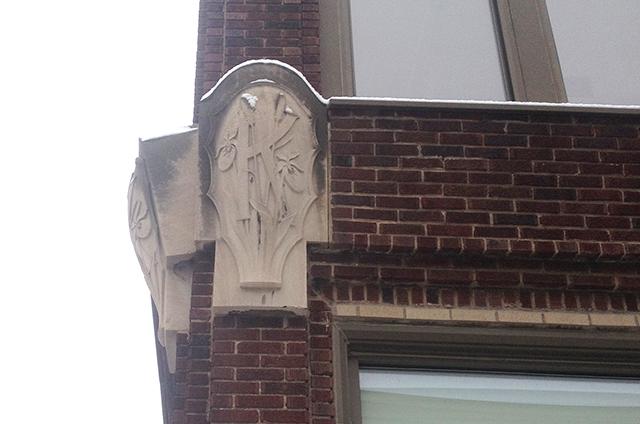 MinnPost photo by Andy Sturdevant
Limestone medallions of the state flower, the lady slipper, and a “K” decorate the corners of the Knoblauch building.

“From the earliest period of the development of Minneapolis, the name Knoblauch has been associated with business enterprise and activity here,” reads one early biography. (The name Knoblauch is now associated more with throwing hot dogs on the field of the Metrodome, though Chuck is unrelated to Anton and Hattie, as far as I can tell.)

Of course, it was the automobiles they were selling on Harmon Place that led to its decline. The automobile changed the geography of the Twin Cities radically and quite quickly – by the 1950s, most Twin Cities residents had automobiles, and the population of the central cities began a steep decline as the suburbs grew. A few dealerships hung on through the 1960s and ’70s, but by the end of the 20th century, the idea of going down to Harmon Place to buy a car was as quaint as the idea of going downtown to see a first-run movie, or shop at a department store.

Today, besides being a designated historic district (and a convenient pathway between two schools), Harmon Place is home to a handful of restaurants, design and architecture firms, government offices and two grocery stores. Its membership in the great business streets of Minneapolis may be currently inactive, but one never knows what the future holds. Who knows what uses one may find for those wide streets and open brick buildings we’ll find in the future.

The evolution of Harmon Place: from mansion district to automotive center to campus connecter