Everything on this list broadly fits into the category of “public art,” at least in terms of each of them being an artistic project you might find walking around the Twin Cities in 2015. It’s not comprehensive, but it’s a short list of things I saw – or, OK, heard about and then saw on social media later – that stayed with me. 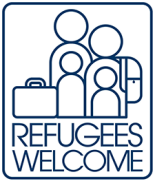 1. “Refugees Welcome” sticker
A collaboration between print studio Burlesque of North American and advertising strategist Veda Partalo, who came to Minnesota as a Bosnian refugee in 1996. These stickers are printed for businesses to place on their front doors and storefront windows, as a way of letting refugees know that they’re welcome. It acts as a message of outreach, of course, but also a small, human political gesture in the middle of a heated and nasty international debate. 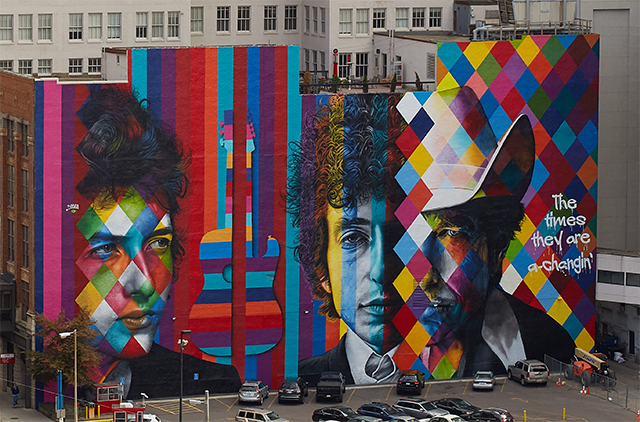 2. Eduardo Kobra’s Bob Dylan mural
A discussion of the year in public art wouldn’t be complete without mentioning this project from the Hennepin Theater Trust, just as any discussion of local culture at any point in the past 50 years has invariably included a mention of Bob Dylan, regardless of topic. Eduardo Kobra’s mural is exceptionally well executed (and I was happy to see it also included the old, weird, Victoria’s Secret/Soy Bomb-era Dylan). I’m with poet Dobby Gibson, who suggested on Twitter that some better subjects for a mural might have been Prince, Tiny Tim, a Nankin Wanderer, Marge Gunderson from “Fargo,” Andrew Zimmern eating a centipede, or a tromp l’eoile skyway. But Bob is a fine subject, too, and this mural will be around for generations. 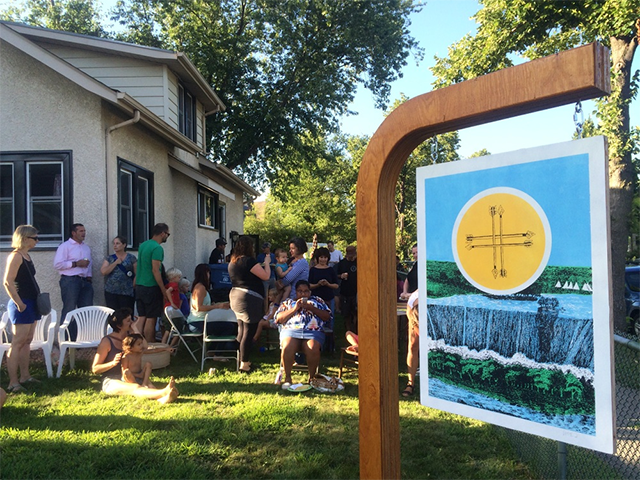 3. This Home is Not For Sale
In the front yards of eight homes around Minneapolis, you may see signs that look like the work of a particularly visionary realtor, but are in fact the work of artist Witt Siasoco – the minimalist, graphically bold imagery conjures up concepts of sanctuary, safety and home. Throughout spring and summer, Siasoco worked with performing artist Molly Van Avery, Poetry for People and the City of Lakes Community Land Trust to organize a whole host of the region’s best poets to read their work in formerly foreclosed homes, along with music, bike tours, DJs and (in at least one case) tarot readings. The poetry is on the project, and the signs remain in those front yards.

4. Wes Modes’ Secret History of American River People
Artist Wes Modes has been taking his shantyboat up and down the Mississippi River for a while now as part of his Secret History of American River People project. His stopover in the Twin Cities this summer included some programs at the Minnesota History Center and St. Paul Yacht Club. Modes has been collecting stories, artifacts, interviews, books and whatever other weird experiences one encounters on the Mississippi, and his events always attract an interesting mix of river rats, boaters, environmentalists, historians, enthusiasts and other folks who fall under the broad rubruc of “river people.” We can hope the shantyboat returns again soon. 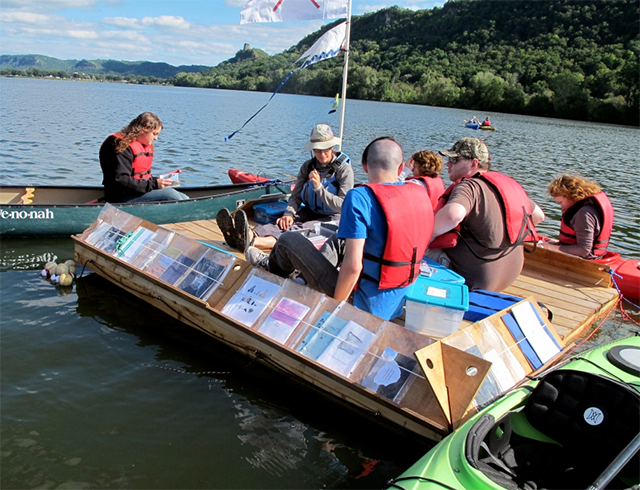 5. Floating Library
More boats! As in, “here are some more boats,” but also, “I’d like to see more boats out there on lakes and rivers as part of art projects.” Sarah Peters’ Floating Library, a collection of artist-made books on a floating raft available for check out to those willing to paddle out to them, has been at the center of a few lakes around the city in the past few years. This past summer, it was on Silver Lake Silverwood Park in Northeast Minneapolis. The closing event featured a reading from Steve Healey, and a moonlight paddle. All the books, I understand, made it back to the raft at the end of the season, safe and dry.