This column is called The Stroll, and though most everything I write about is best experienced on foot, the actual act of strolling itself — putting one foot in front of the other and making one’s way across the world — is often somewhat secondary to the topic at hand. Occasionally, however, we get lucky enough to come across a topic that combines some notable piece of the local built environment with the act of walking. One such site is located at 2nd Avenue and 6th Street in downtown Minneapolis — the cornerstone of what is now the Grand Hotel, and once the site of the Minneapolis Athletic Club. That cornerstone was laid in 1913 by a 75-year-old man who’d just walked 1,546 miles from New York City in exactly two months, at a rate of about 25 miles per day.

The man undertaking this impressive feat was an unlikely late 19th and early 20th century celebrity named Edward Payson Weston. Not to be confused with the noted photographer a generation younger, Weston was one of the greatest exponents of what was then called pedestrianism. Pedestrianism was just what it sounds like — the act of walking, whether competitively, for pleasure, or for whatever other reason, often in front of enormous crowds of spectators, or over extremely long distances.

Where long distances were concerned, Weston was the most accomplished of these pedestrians, a genial, wisecracking old New Yorker who loved both walking and publicity in perhaps equal measures. In contemporary photos, he appears camera-ready in elegant walking boots, a handsome white mustache, traveling hat tipped at a jaunty angle, and carrying a cane beside him. He was no dilettante, though; Weston’s most noteworthy walk was in 1909, where he traversed the route from New York to San Francisco in 100 days, and he’d accomplished dozens of other multiday overland routes on foot between 1861 (when he walked to Lincoln’s inauguration from Boston) and 1922 (from Buffalo to New York in a month, at age 83). The degree of Weston’s popularity is hard to believe today; over the course of 1913, in the months leading up to his arrival in Minneapolis, admiring notices about Weston appeared in the Minneapolis Tribune several times a week, tracing his progress from the East.

“I’m getting a year younger every day of my walk,” he exclaimed to a Minneapolis Morning Tribune reporter from a stopover in Pennsylvania. Syndicated national columnist Willard W. Garrison proclaimed Weston “the greatest athlete of the age, everything considered.”

In a time where modern forms of conveyance, such as the automobile and the streetcar, were becoming more and more widespread, Weston acted both as a sort of throwback to a more ambulatory era, and a loving testament to the physical and spiritual benefits of walking.

“Today most people consider it an imposition if they have to walk a few hundred yards to get to a station or trolley line,” wrote the New York Tribune a few years before his death. “Even in the country the flivver [a small automobile] has made walking a chore. The country needs Weston’s inspiration. Without him there is a serious danger walking will become a lost art.” (Ironically, Weston’s 1913 walk was sponsored by the automobile manufacturer Hudson.) The local paper here echoed these sentiments in decrying a sedentary age: “We engage in competitive athletics until we are about 22. We play baseball or lawn tennis until we are about 32. We take exercise with more or less regularity (chiefly less) until we are about 42,” reported the Tribune after Weston’s visit. “After that,” it concluded, “we grow fat.”

The Minneapolis Athletic Club had been founded a few months earlier, and was beginning construction on a 14-story clubhouse in downtown Minneapolis. Over the years, many noteworthy athletes would appear at the club — there’s a letter of gratitude from Babe Ruth framed in the lobby today, over the coffee bar — but when the time came for the backers to have a noteworthy athlete on hand to lay the cornerstone, Weston was their pick. 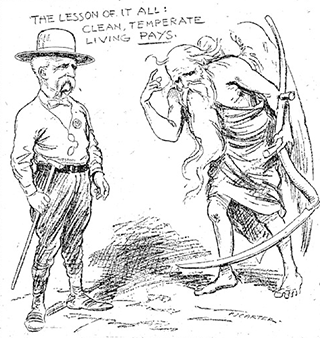 Minneapolis Tribune via Hennepin County Library
A cartoon from the Tribune’s four pages’ worth of coverage of Weston’s arrival, August 1913.

The coverage reached fever pitch a few days before his arrival. Weston mostly followed railroad lines — they made for the easiest walking and more direct routes. On July 29, he crossed the state line at Stillwater, where Gov. Adolph Eberhart met him, along with members of the Minneapolis Athletic Club, the mayor of Stillwater, and a large number of other well-wishers. He arrived in St. Paul shortly thereafter, and began his walk downtown — I can’t find the precise route reported, but the final leg involved him walking down Central Avenue, crossing the river, and then down Nicollet Avenue, which makes me think he most likely walked down University Avenue from St. Paul. “Continuous ovation” followed him the entire nine miles, according to the Tribune.

Weston returned the cities’ accolades. “Mr. Weston said that he was impressed along the line of his march at the healthy, happy appearance of Minneapolis people. ‘Here you have genuine health,’ he said, ‘and surely there must be something in the assertion that the Minnesota climate breeds health, vigor and happiness.’ ” There’s a pull quote that could be easily reproduced word-for-word a hundred years later in one of those “Minneapolis is the healthiest city in America” lists that turns up in your social media feed a few times a year.

Unlike many of the other gender-segregated athletic undertakings of the day — including much of what went on at the men-only Minneapolis Athletic Club — pedestrianism was an activity that could be taken up by women. Women of the Twin Cities joined Weston in his cross-town travels in the several days in which he was in Minneapolis, leading mixed-gender groups on walks around the metro area. In fact, another pioneer of long-distance pedestrianism, Helga Estby, a Norwegian-born woman who was raised in Yellow Medicine County, and later relocated to Spokane, Washington, visited Minneapolis at least once to speak at the Dania Hall on the West Bank about her experiences walking from the West Coast to New York City with her daughter Clara in 1897.

“During our travels we have worn out 16 pairs of shoes, eight hats, and have now on our fifth costumes,” she reported to a rapt audience. A few months after Weston’s visit, his feat was reproduced by a Middletown, New York, woman named Marie Chester and her three teenage children, Alice, Henry and Charles. They completed the walk to Minneapolis in 53 days, despite, as the local gossip was reported, “no one but Weston could perform such a feat as walking to Minneapolis.” 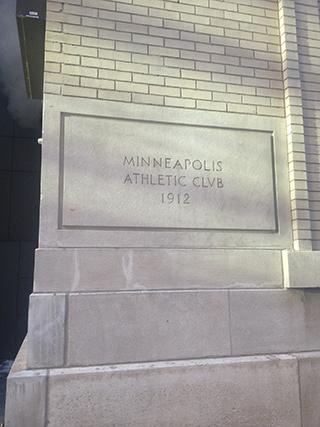 MinnPost photo by Andy Sturdevant
The cornerstone of the Athletic Club as it appears today at the Grand Hotel on 2nd Avenue.

The Chesters’ trip was prompted not by an invitation, but by a wager she made with some New York businessmen that she could complete the trip — the prize being $4,000 to rebuild her home, which had been destroyed in a fire. The economics of these pedestrian walks are complex and vaguely sordid — Estby completed her walk based on a wager, as well, and the sport of pedestrianism was eventually brought down by allegations of gambling, wagers, fixed matches and even personal attacks — Weston was said to be have been attacked a number of times earlier in his career by desperate gamblers.

Wagering, economic desperation and assaults aside, most of these pedestrians’ intentions — including Weston’s — were based primarily on a love of walking. He stayed in town for several days after to help start a Weston Walking club, whose members included not only men, but also women and children. Weston apparently bought a farm in northern Minnesota, where he may have planned to relocate. Nothing came of it, and he returned to New York, only to be struck by a taxicab in 1927, five years after his final great hike from Buffalo. He died two years later.

Speaking to a crowd during his time in Minneapolis, downtown near the Athletic Club, where the cornerstone is still visible to pedestrians on 2nd Avenue, Weston spoke to the pleasures of walking in language that still resonates: “The walking epidemic is not confined to class or creed, and it is the one form of recreation within the reach of high and low, rich and poor alike.”

Minneapolis, 1913: A new cornerstone, a visiting celebrity and the joys of ‘pedestrianism’