When you’re playing host to out-of-town guests visiting the Twin Cities for the first time, a few questions come up somewhat regularly — and knowing how to answer them reflects well on you as a host, and well on the cities generally. After a while, you learn to answer the most popular ones: where to see famed Prince and/or Replacements sites, where to eat various types of locally specific foods, what to do with someone’s kids, where to most comfortably spend a sunny summer afternoon or a subzero winter evening. Most Twin Citians love putting these types of lists together – I have mine, and you probably have yours.

A few weeks ago, however, I had a question come up that I’d never heard before.

A friend was visiting from New York, and we were putting together the itinerary. “Is there any place,” she asked, “where you can see both cities at the same time?”

I’d never considered this carefully; there are a few I could think of, but there are not really a huge number of options. They are twin cities, after all; everyone knows that. When my dad visited Minneapolis for the first time, years ago, he was disappointed to learn the downtowns of the Twin Cities weren’t right next to each other, like on opposite sides of the river. The two downtowns are on other sides of a river, but those nine or 10 miles are separated by changes in the topography and in the curvature of the river. It’s pretty rare to see both central cities side-by-side, which makes an airborne photo like this all the more breathtaking and lightly surreal. They really do look like rivals from that perspective, like when you put two otherwise perfectly good-natured siblings next to each other in a photo, and both of them reflexively start glowering.

So, in the event of an out-of-town visitors asking you to arrange a sibling portrait of these two distinguished metropolises in the same viewfinder, you can clip, print or PDF-ify this column for handy future reference. This isn’t a comprehensive list (Snelling Avenue over 94 is good for a 360 view, and depending on the season, you can see a distant Minneapolis dwarfed by the unstoppable power of the St. Paul skyline from the West Side bluffs). If you have a favorite I’ve missed, please leave a comment.

For the sake of simplicity, I am only listing venues that are publicly accessible. My understanding is that a trip to the top of the 3M headquarters, Cedar-Riverside Plaza, the Midway Tower, the United Crushers ADM elevators or the Midtown Exchange will yield spectacular views of both cities, but you’ll have to know someone who can swipe the fob over the elevator panel for you in these cases. I can only take you so far in these columns.

The Witch’s Hat at Prospect Park in Minneapolis and the Highland Tower in Highland Park in St. Paul. Two of the better vantage points are closed most of the year, but it’s worth the trip if you can get the scheduling right. Highland Tower is open to the public twice a year, in July and October. You only get one shot with the Witch’s Hat, during the Pratt Ice Cream Social at the very end of May or very beginning of June. In both cases, since you’re in the middle of the vast residential stretches where the two cities bleed into each other, you can’t line up the downtown skylines in the same line of vision, but it’s an impressive 360 sweep of the area.

The Ferris Wheel at the State Fair. The very last thing I try to do every year on my last, final visit to the fair is ride the Ferris Wheel in the Midway, which gives you a nighttime tableau of all you’ve seen and done. Again, you can’t see both downtowns at the same time from the top, but if you sweep your head 180 degrees you can get them both in. 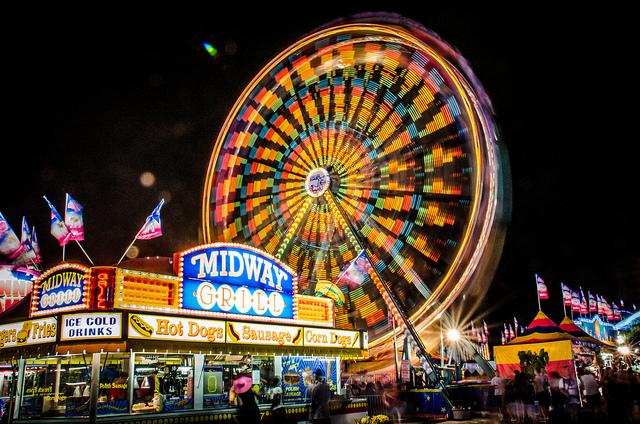 CC/Flickr/m01229
You can’t see both downtowns at the same time from the top, but if you sweep your head 180 degrees you can get them both in.

Ruth Street crossing 94 on the East Side of St. Paul. This is one I hadn’t been aware of before seeing it on one of those city-data.com forums you always seem to come across in the middle of the first page of Google results (those forums have been invaluable if unexpected research tools for me in the years of writing this column). But this is a fantastic view of both downtowns — it’s not the one where they’re both most visible, but I can’t think of any other view where they have the appearance of being closer together. Because of where Ruth Street is located just beyond downtown St. Paul, standing over 94 on the overpass and looking west is like — to steal a great turn of phrase from writer Steve Marsh — lining up a gigantic concrete rifle barrel and getting both downtowns almost right next to each other. In scale, distance and size, they appear to be in nearly perfect harmony.

East Parking Ramp at the Mall of America. Some of the parking garages at the airport give you a similar perspective. But Bloomington and the MOA line up as the vertex of an inverted triangle between the two downtowns — I wonder if you could see both the Foshay Tower and the First Bank Building from the top bleachers at the old Met Stadium (the historic record, as far as I can tell, is silent on this matter). I recall the East ramp being the better of the two, but I haven’t been back since all the work to the north side of the building, so perhaps this has changed. But being near the Minnesota River valley, you get a great sweeping panoramic view of the whole metro area, elevated by several floors of parking garage. “I understand how flatlanders could become so desperate for scenic variety as to construct their own mountains,” writes chronicler of the American West Doc Daniels (somewhat smugly). Well, the East Parking Ramp at the Mall of America is one of those constructed flatland mountains, so we might as well use it. 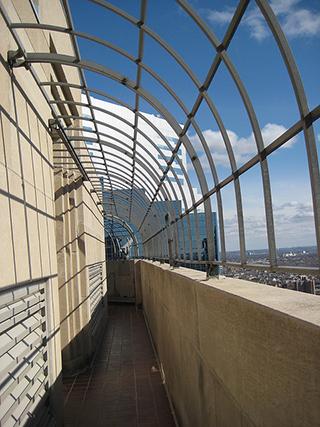 CC/Flickr/minnemom
The Foshay Tower is sort of cheating.

The Foshay Tower. OK, this is sort of cheating. You can see both downtowns at the same time because you’re right in the middle of one of them. But the open-air observation platform is one of the last of its kind in the cities (and, really, anywhere in the U.S.). You can clearly see downtown St. Paul off in the distance, and Minneapolis all around you. From up here, you can even get some good views of the suburban downtowns (or whatever you might call the clusters of glass high-rises along I-494 and Highway 169 to the south and west).

The Mendota Bridge. Far and away my favorite. The bridge has a bike and pedestrian lane on one side, so if you can deal with the roar of traffic whizzing by you at 60 miles per hour, this is one of the best views of the whole metro area available – maybe the best. It’s especially good on the far eastern side, when you’ve almost crossed the Minnesota River completely, and Minneapolis pops up over the shoulder of the bluffs. At moments where there’s something going on in the atmosphere — fast-moving clouds, a passing shower, a snowstorm, a rainbow, airplanes descending into MSP — it’s even better. If your out-of-town friends have a taste for panoramic viewpoints and bicycle rides through river valleys — or even just leisurely drives through woodlands and over bridges — this should be on your itinerary right up there with Jucy Lucys and hot spots for Prince sightings. 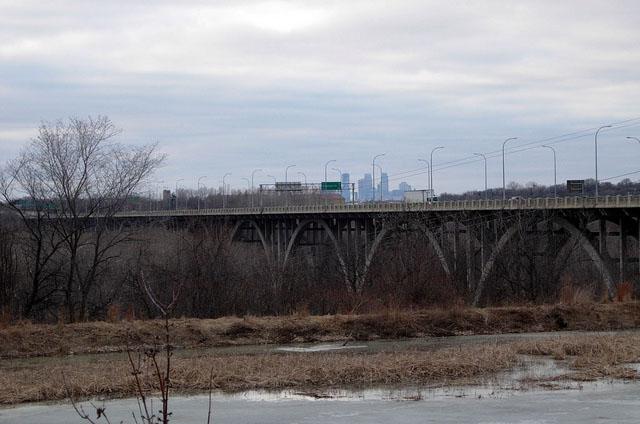 CC/Flickr/Andrew Munsch
The Mendota Bridge should be on your itinerary right up there with Jucy Lucys and hot spots for Prince sightings.

Where to go for a sibling portrait of our twin downtowns