“There is a sort of insider knowledge,” writes a commenter on city-data.com, as if he’s not sure he should be revealing this information, “that the Twin Cities are like Springfield and Shelbyville.” He adds, helpfully: “St. Paul is Shelbyville, in case you do not get the joke.”

This is certainly a joke I’ve heard as long as I’ve lived in the Twin Cities. In the long-running TV show “The Simpsons,” Springfield and Shelbyville are twin cities, located right next to each other in the unnamed state in which the show takes place. Despite the appearance of being somewhat similar in population and cultural amenities, the two towns are in a state of continuous competition. Lisa Simpson offers the most trenchant summary of what she calls “the pointless rivalry” between Springfield and Shelbyville: “They built a mini-mall, so we built a bigger mini-mall. They made the world’s largest pizza, so we burnt down their city hall.”

“Yeah, they swore they’d get us back by spiking our water supply,” adds Homer. “But they didn’t have the guts.”

That brand of civic one-upmanship probably does sounds kind of familiar to anyone who lives here and follows local culture or politics. The best example of this joke in local media I’ve ever seen is in this 11-year-old City Pages article about a hardcore show, but there are a few other references, sprinkled throughout various online forums and message boards. When my friend Jake moved to St. Paul briefly a few years ago, he announced the relocation by saying he was finally moving to Shelbyville.

Despite Minneapolis and St. Paul’s rivalry not quite rising to the level of local water supply contamination, the Springfield/Shelbyville-style posturing does come through in something like the recent tangling over soccer stadia. “They threatened to build a soccer stadium, so we built a bigger soccer stadium,” to paraphrase the original line. That’s really just a less hyperbolic version of “But we lost the Olympics to Shelbyville.” Or, even more accurately: “I come before you good people tonight with an idea. Probably the greatest — Aw, it’s not for you. It’s more of a Shelbyville idea.”

The Springfield/Shelbyville jokes about the Twin Cities are enduring, possibly because the cultural legacy of “The Simpsons” runs so deep – it’s been on since I was 10 years old, and if you’re of a certain age and temperament, you’ve probably seen every episode of the first 10 seasons at least three times. (I certainly have.) Apart from that, though, the joke works because it feels authentic to the experience of living in a city that has a twin right next door, as the barely decontextualized quotes above demonstrate. Both siblings have a tendency to get a little competitive over everything.

Two pioneers, Jebediah Springfield and Shelbyville Manhattan, come west, “after misinterpreting a passage in the bible. Their destination, New Sodom.” When they arrive, there is a schism over what the new settlement’s founding principles will be. Shelbyville had made the trip to exercise the right to marry his cousins, while Springfield has come west to establish a town “devoted to chastity, abstinence, and a flavorless mush I call rootmarm.” 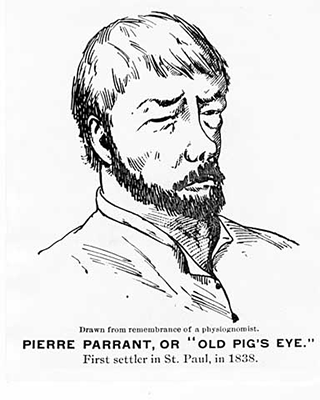 Wikimedia Commons
“I tell you, I won’t live in a town that robs men of the right to marry their cousins!”

This is not exactly how Minneapolis and St. Paul were founded, but in some ways, it’s not far off. First of all, there was a sort of real-life Shelbyville Manhattan, and his name was Pig’s Eye Parrant. The first Euro-American settler in St. Paul, he didn’t marry any of his cousins, as far as I know. However, as a bootlegger, he did often find himself on the wrong side of the law. He lived in a cave near present-day downtown St. Paul. Like Shelbyville, the town that grew up around him took his name, at least initially: St. Paul was originally called Pig’s Eye. There’s even a vague resemblance in Shelbyville Manhattan and Pig’s Eye Parrant’s slightly unsavory, bearded faces.

Minneapolis, meanwhile, was founded by New England Puritans very much like Jebediah Springfield, in the sense of being devoted to chastity and abstinence, and possibly flavorless mushes of one kind or another. Early hagiographies of the city’s leading citizens read not unlike expressions of Jebediah’s sober, Yankee principles: William Donaldson, who’d later go on to found the department store, is said to have possessed the traits of “industry, sobriety and integrity,” and another Massachusetts native is said to exemplify the “practical virtues of honesty, charity and good will.” All that’s missing is the rootmarm.

Springfield’s best-known landmark is a bronze statue of Jebediah Springfield in the town square. In fact, Minneapolis’ own town square had a very similar statue for many years. The neighborhood around the foot of the Hennepin Bridge on the downtown side served as the de facto town square from the 1870s to the middle of the 20th century. Originally known as Bridge Square, and then the Gateway District, a small park called Pioneer Square was created nearby in the 1930s. On the square, near the site of the downtown post office, there was a granite sculpture by John Karl Daniels of three flinty pioneers, staring off into the prairie horizon. When the Gateway District was razed and redeveloped in the 1960s, the statue was moved to Northeast Minneapolis, where it still stands. 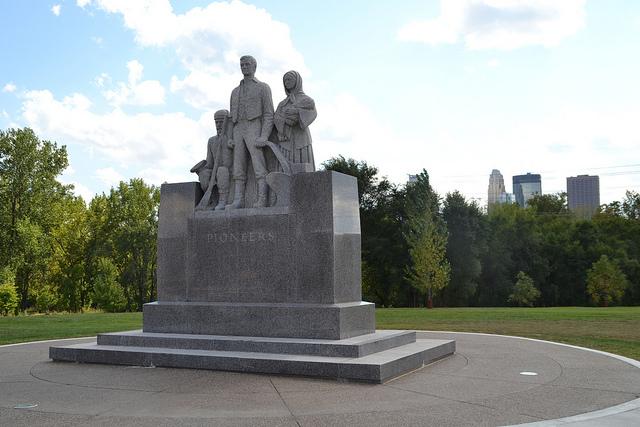 Now, tell me that pioneer on the left doesn’t bear a certain resemblance to Jebediah Springfield.

I could spend the whole column making Springfield/Minneapolis side-by-side comparisons, but I’ll spare you that. Well, OK, one more: the Sunrise Inn at 34th Avenue South and East 46th Street is definitely the real-life Moe’s Tavern. 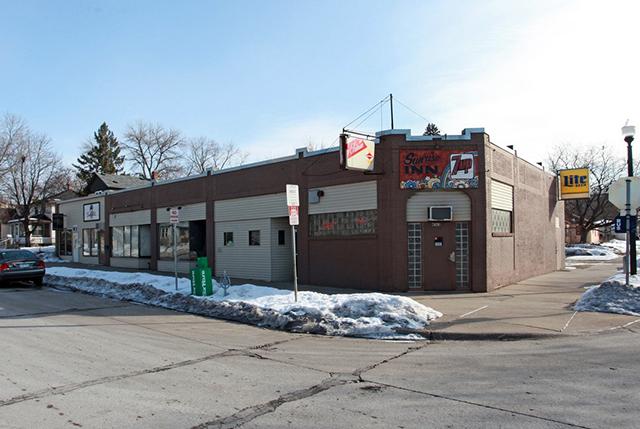 In later seasons, the nature of the rivalry between Springfield and Shelbyville changed somewhat. The joke, early on, is that for all their posturing, the similarities between the two cities were pretty minimal – this idea is best played out when Bart’s best friend, the hapless Milhouse Van Houten, meets another blue-haired boy named Milhouse on the streets of Shelbyville. “I thought I was the only one,” says the Springfield Milhouse. “A pain I know all too well,” says Shelbyville Milhouse. They embrace tearfully.

“So this is what it feels like when doves cry,” sobs Milhouse.

Eventually, Shelbyville became the more cosmopolitan twin, and Springfield the more insecure counterpart. In later episodes, contrary to the popular local perception, Shelbyville seems to be more stereotypically Minneapolitan: it has a theater district, and a Shelbyville Falls, and fancier shops. (“They have a store that just sells shoes!” enthuses Marge.) Springfield is the smaller, more hardscrabble twin – more of the St. Paul, in terms of the local clichés. But the later episodes aren’t as good, as most people will tell you, and it’s a shame that the joke is spoiled by the less interesting proposition that one town really is superior to the other. In older episodes, both Springfielders and Shelbyvillians were equally prone to mob violence and bad judgment. Springfield drank Duff, and Shelbyville drank Fudd. The central point that makes an episode like “Lemon of Troy” so funny, and so poignant, is that the citizens of Springfield and Shelbyville are so hung up on their exceptionalism that they’re driven to flagrant acts of criminal mischief in order to prove their worth. 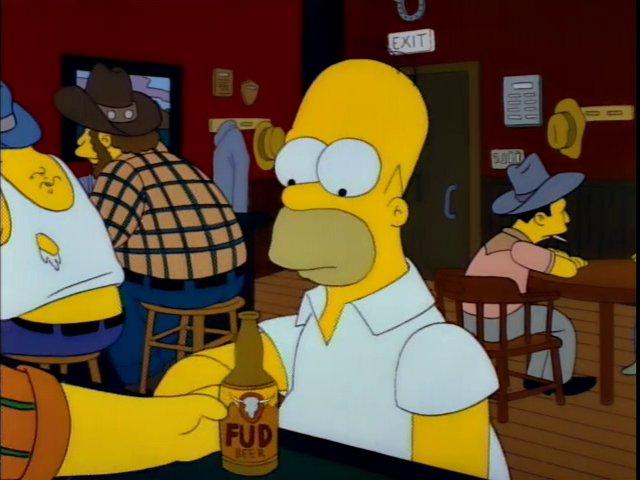 Regardless of how the nature of the rivalry on the show has changed, the joke is pretty fixed in the local imagination, at least among the set old enough to remember wearing “Underachiever and Proud of It” Bart Simpsons T-shirts. Maybe its just because I live on the west side of the river, but after all these years, I’ve never heard anyone refer to Minneapolis as “Shelbyville.”

It always refers to St. Paul.