Last fall, for the purposes of art and the furthering of the glories of pedestrianism, I walked from Minneapolis to Northfield over the course of a day-and-a-half. It was that second day, which began in Farmington, which really put me in the middle of some remarkable landscapes, both physical and social. I’ll write a bit about the physical landscape, but it’s one particular aspect of the social landscape I’d like to have a look at: the “hi sign,” also known as the “one finger wave.”

You may know this gesture, if you’ve spent any time driving in the rural parts of the country. It’s not necessarily specific to Minnesota, but rather binds the entirety of rural America together, at least in the middle of the country. You can also find it referred to as a “hidy sign,” “trucker’s wave,” “Texas finger wave,” or even “Texas two-finger” (everything, as you know, is bigger in Texas). When, while driving, you pass someone on a country road, friend or stranger, you raise the forefinger of your driving hand in a quick salutation as you pass. The gesture is usually reciprocated.

Anne Dingus sums it up nicely in Texas Monthly:

… By using it, we convey our goodwill to our fellow drivers and reaffirm our reliance on each other during long trips across isolated country. The hi sign is strictly a highway courtesy, an automotive gesture developed for a modern age. A person on horse or on foot raises his whole hand, but the demands of travel on wheels dictated a specialized wave. Body language for “howdy,” the hi sign is the simplest of waves, merely the raising of the forefinger of the driving hand, which does not budge from its draped position across the top of the steering wheel, the attitude struck by most long-distance or travel-wise drivers … It wastes no energy; it is a model of efficiency, like all nonessential movements by country folks who must save their labor for the land.

For some regional perspective, I called my friend Shanai Matteson, who grew up in Aitkin, Minnesota. Coincidentally, she was visiting family in Grand Rapids when I called, and she put her uncle Craig on the line. When the topic came up, everyone at her table chimed in. “We invented the one-finger wave!” exclaimed her aunt in the background.

“We were in Chaska before we were up here,” said Craig. “I’d never seen it before I came up north.” 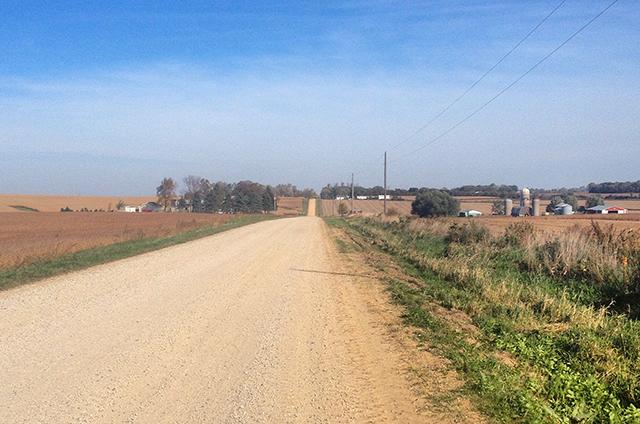 Driving through Dakota County is one thing, but walking through it is something entirely different. After a harrowing few miles on Highway 3, walking while facing traffic, I cut across 240th Street and took dirt and gravel roads the rest of the way down – Denmark Avenue to 280th Avenue, past the Greenvale Cemetery, and then Eveleth Avenue to Northfield. The landscape opens up enormously at that point. Being a lone figure against that landscape, walking at a pace where it barely changes from mile to mile, is almost like being out at sea.

Off the state highway and on the back roads, the mood of the drivers changed enormously. People blowing down Highway 3 were typically coming so fast they barely had time to register me at all, much less make any kind of gesture. (Well, OK, one of them had time to make a certain gesture.) But once I got on Denmark Avenue, the driver of every passing automobile would invariably send a hi sign my way. I only encountered maybe seven or eight over the entire 10 or so miles – two or three cars an hour. But they all did it, without fail.

Which led to an interesting crash course in etiquette. I’d encountered the hi sign many times behind the wheel of a car, but never while on foot. What’s the correct protocol? 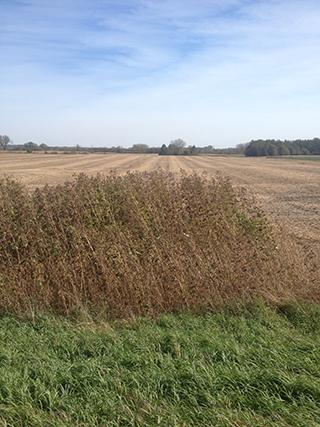 There is a great deal of information about the one-finger wave online, but little about how it works from a pedestrian standpoint. Over the few hours, I assembled my own ad-hoc set of rules.

The first thing that occurred to me is that while of course I should wave back, I can’t really give a full wave. I didn’t encounter another pedestrian while out on foot, and the fact that I was out there on foot at all, and not obviously a person who lived within walking distance, probably looked a little bit odd. (Then again, I’ve heard from plenty of friends and acquaintances whose family members take long walks on country roads, so perhaps it didn’t seem that unusual.)

But when you’re on foot and you’re waving at cars, there’s a certain restraint you need to have. A full-bodied wave to an automobile doesn’t always signal casual sociability. Anything too overstated, and it may appear as if you’re signaling for help. You want your wave to convey, “Hey, doin’ OK, thanks for waving, have a nice drive,” and not “help, my car broke down, I need a ride to the gas station, can I use your phone.” The latter is a scenario that’s entirely plausible. There’s already maybe a question in the driver’s mind about what exactly you’re doing all the way out there in the first place, especially if the driver knows every person who lives within walking distance of where you are.

In your own wave, you can’t really give back a standard hi sign. You can’t really replicate the circumstances while standing upright. The hi sign requires a hand on a wheel, raised to the chest level, as a starting position. The whole idea is that it takes a minimum of effort – you flip up the finger in a friendly way, because the finger is right there anyway. When you walk, your hands are at your side. Lifting your hand all the way up to give a standard wave exerts much more energy. It makes you seem a little too desperate, a little too eager to please.

What I settled on was a sort of adapted one-finger wave, suitable for the pedestrian. It looked a little like the two-finger wave sitcom characters give when they’re in a restaurant and signaling to the waiter for the check, or like a flashing a half-hearted peace sign, but with only the index finger instead of two.

This seems to have done the trick (which is to say, nobody stopped and asked me if my car had broken down). I asked Craig later if he’d noticed anything similar from walkers he’d pass, and he more or less confirmed the technique. “They just do the one finger,” he said. “Just flip it up like that, yeah.”

While walking in the country, on a dirt roads with no shoulder, there’s another piece of etiquette I figured out pretty quickly. It’s flat enough in southern Minnesota that you’ll see an approaching automobile coming from some distance – you’ll see a plume of dust coming off the dirt road before you see the automobile itself. It might be a car or truck, but it’s just as likely to be a combine or tractor. 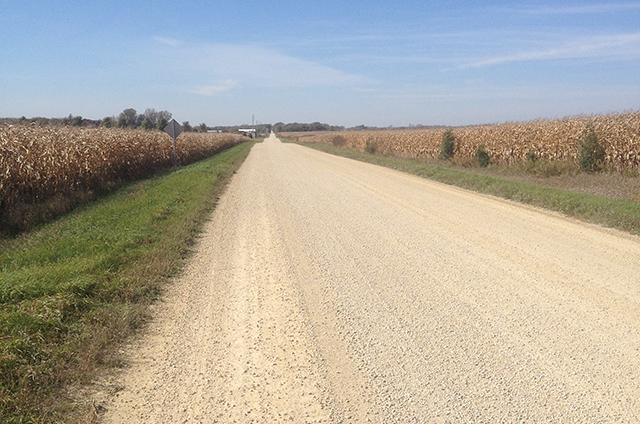 MinnPost photo by Andy Sturdevant
If you squint, you can see a Ford F150 approaching in the far distance.

What you should do is walk over to the other side of the road. This improves your visibility, of course, but it also serves a more important function: It gets you out of the way of the haze of dust the passing automobile will kick up as it goes by.

These casual, person-to-person interactions are a good way to tether yourself to the rest of the world in a part of the state that seems very remote from it. Walking a few hours through the sweeping vistas along the gravel roads in that part of Dakota County are about as far removed from the typical pedestrian experience as you can get. It’s good to know that, if you actually were stranded and did need a ride to the gas station, someone would probably stop and help you out. In some ways, the hi sign is a gesture toward that sense of mutual reliance. If one of us were in trouble, it says, the other could lend a hand.

But since neither one of us are in trouble, it goes on to say, enjoy your trip down the road.

Rural drivers’ ‘hi sign’ is great — but how do you respond if you’re on foot?