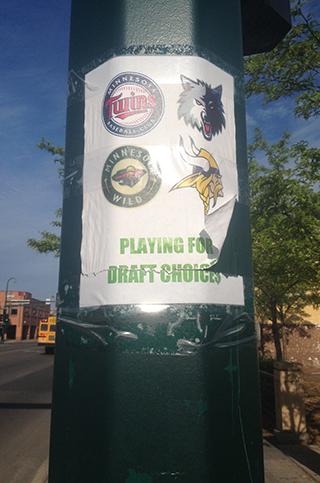 Maybe you’ve seen these around town, while crossing a street, or waiting for a bus: agitprop posters, printed on 8½ x 11” copier paper and clearly created in Microsoft Word, banged out with fonts like Algeria and Impact, decrying various aspects of the Vikings’ management, finances, stadium, and general place in the wide, wide world of sports.

These public condemnations are accomplished in a blur of condescending Mad-magazine-style nicknames, relatively sober analysis, Strib commenter humor, sports-talk-radio bravado, and a great deal of deep historical perspective. They call the new Vikings stadium “the Zigirat, eighth wiener of the world,” and site of the “‘End Times’ Stupor Bowl.” They consistently refer to the DFL as the “CFL.” They laud ’60s-era Vikings GM Jim Finks as “the best general manager in the history of sports.”

These messages are always unsigned and uncredited. I’ve seen them all over, from Chicago Avenue to Snelling Avenue, and many points in between. Usually they’re taped to utility poles with packing tape, in sets of two or three. They’re not laminated or otherwise protected, so they only stay up for a few days before the elements ruin them. They’re not wheat-pasted up, or stickered, or weatherproofed in any significant way – this leads me to believe either the creator has some concern for their long-term impact on public infrastructure, or they’re just working with a budget where a tape gun and printouts are the most economical way to go.

I don’t know who this person is, but I think he or she is a sort of folk hero. 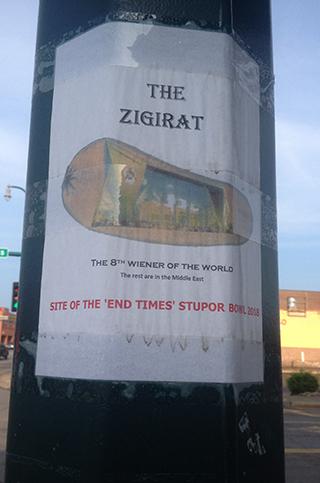 What differentiates this individual from, say, any other poster artist or wheat-paste agitator is the purity of the mission. These posters don’t, as far as I’ve been able to tell, credit a creator, or link to a website where one can learn more, or anything else. They exist as pure agitprop, an attempt to sway hearts and minds without directing the viewer to take any specific action. There’s no clear profit motive, no clear organizing aspect. It’s just pure expression: Here’s what I think, here’s why I’m right, there you have it.

And sure, you can find this kind of commentary all over the Internet, no problem. In some ways, the rhetoric seems like it was born, or at least perfected, on the Internet, principally in those portions devoted to the discussion of sports, and football in particular. That’s a world so alien to me I’ve never even pretended to be conversant in the language. In some ways, I’m not the audience for these things.

But in another way, I’m the perfect audience. It’s not the sort of argument I really encounter in my own cultural bubble; if someone thinks the new stadium was a bad deal and an example of corporate avarice run amok, I’m inclined to think, well, they probably don’t really care about football, either. The really interesting thing about our poster artist here is that he or she clearly adores the Vikings as a franchise and institution and their history and all the rest of it, but still hates the stadium deal and the way the team is managed, and has the historical perspective to back up those viewpoints. A lot of the time the stadium question seems to be framed as People Who Love Sports vs. People Who Don’t Like Sports. 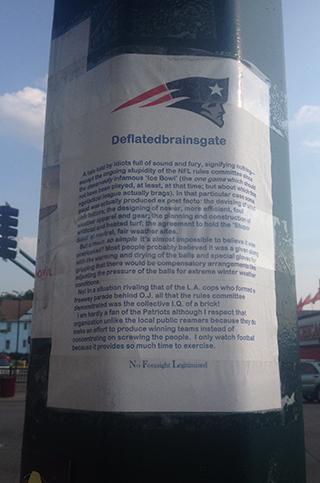 MinnPost photo by Andy Sturdevant
A timely commentary on Deflategate. “I only watch football because it provides so much time to exercise.”

That’s what being out in the public sphere should be like – getting out of your bubble.

What differentiates these from any random Strib commenter is that the creator has set out to place these posters physically all over town, consistently, for years. There is a truly single-minded commitment to getting the message out there that’s pretty unique. I wish I had more photos of them – I never seem to catch them in their pristine state, and when I see them, I’m usually catching a bus or otherwise in a hurry. They have changed over the years – it’s not the same ones, over and over. One of the first I saw was the tribute to Jim Finks, and noticed it had been updated recently (“Jim Finks Redux”) with current information about the stadium.

But again, the lack of context and anonymity is strange and, in this age of nearly compulsory self-promotion and personal branding, almost heroic. If you plug distinctive phrases from the varying screeds into Google, there are a few hits that come up on long-abandoned WordPress blogs that seem to have been created by the same person, but there’s not really enough information even there to provide any firm answers. 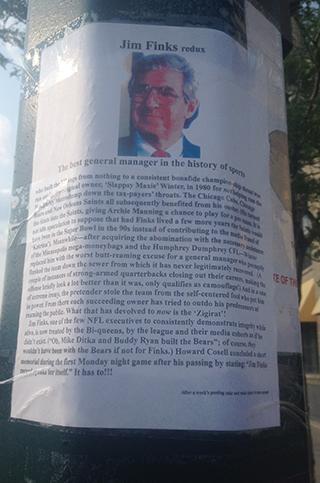 My MinnPost colleague Bill Lindeke has written often of “public characters,” individuals whom urban theorist Jane Jacobs identified as “anyone who is in frequent contact with a wide circle of people and who is sufficiently interested to make himself a public character.” Not all these characters, of course, are uniformly pleasant or even fun to be around. Some stories of public characters, he writes, “can make cities seem almost too nice, as if the crazy diversity of people didn’t really prickle up and create friction.”

These posters serve as a physical version of that friction. We’re surrounded by rogue pieces of visual culture everywhere in the public sphere – I’ve written about some of them. There’s a wide diversity of types of media and degrees of intrusion, but most of it seems to fall into pretty predictable categories. It’s musicians, designers, artists, record labels, events, bar nights, new movies, lost dogs, sneaky national brands, guitar lessons, the sorts of cultural, political, artistic and moneymaking projects you find in urban environments. But it’s always interesting to come across a different type of voice – one that doesn’t exist in an echo chamber, but is in conversation with the world around it, in whatever idiosyncratic way.

That’s why I’m always so excited to come across these posters in the wild. I don’t know to what degree I agree or disagree with the various viewpoints, but that’s pretty immaterial here. Wherever this person is, I hope they keep at it. I need to know what the anti-stadium wing of the Vikings base is up to, and this is about the best way to find out.

Unsigned agitprop: Views from the anti-stadium wing of the Vikings base