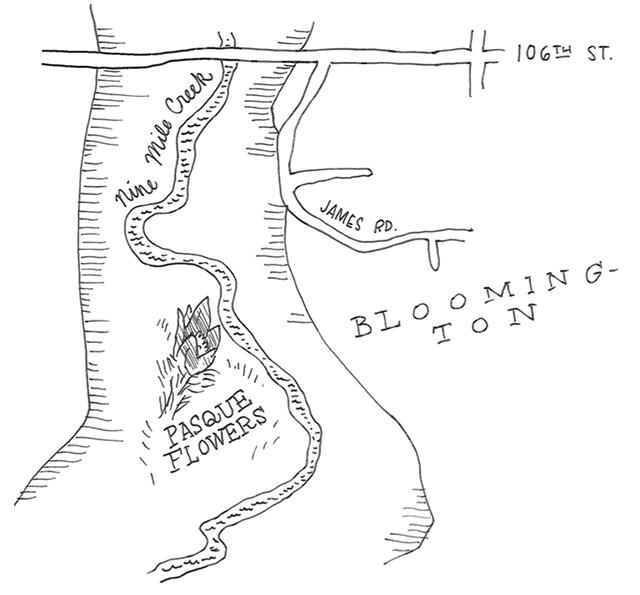 MinnPost illustration by Andy Sturdevant
Pasqueflowers are a feature of the prairie landscape, and are most abundant in places where the prairie has been managed or restored – that is, very few places in the city proper.

Around Easter every year, you can find the pasqueflowers making their way through the vanishing snow cover and tramped-down brown prairie grass on the prairie. For about three weeks in April, these wild perennials bloom in clusters, before almost any other wildflower; their somewhat subdued purple and yellow colors imbue the white or brown expanses of a thawing prairie with a subtle, cool hue. You may know them either as pasqueflowers, or maybe as the two-word variation, pasque flower. You may also, depending on where you grew up, how old you are, and how into medicinal herbs you are, know them by one of their dozen or so other names. This nomenclatural abundance is why plants have scientific names. In this case, it’s Pulsatilla patens. “Pasque” itself is a French word for Easter with roots in Aramaic and Hebrew – it’s a variation on “Pasch,” itself derived from the Hebrew “pesah,” for Passover.

The many other vernacular names are equally evocative. There are those that make seasonal references: April fools, mayflowers. There are animal references: badger weed, hartshorns. There are names that reference therapeutic uses: headache plants. There are those that put them in a geographic context, either based on what they look like (prairie smoke, twinflowers) or where they live (wind flowers, prairie crocus, rock lilies, wood anemones, meadow anemones). In Minnesota, they’re often referred to as goslings, after the downy wisps on the stalks, which look a bit like the sort of down you find on baby geese. The annals of early 19th century prairie lore are full of accounts of children bringing newly blossomed goslings to their mothers in the springtime. 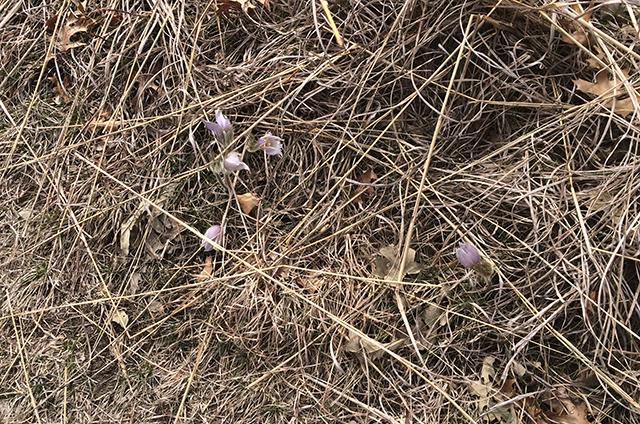 MinnPost photo by Andy Sturdevant
Wind flowers, hartshorns, rock lilies, what have you.

This abundance of names referencing so many aspects of the flower – temporal, physical, spiritual – gives as an indication of what a major part of the natural landscape they’ve been in prairie communities, despite their brief window of appearance. The city of Winnipeg utilizes the pasqueflower as a civic logo, and it features prominently in the popular symbolism of our prairie neighbors in South Dakota and Manitoba. 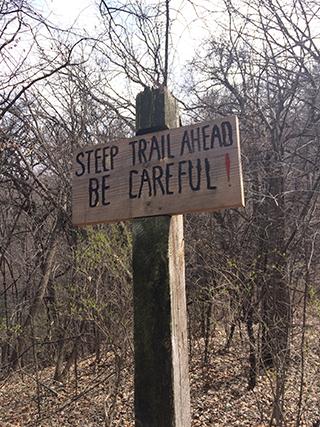 They are a feature of the prairie landscape, and are most abundant in places where the prairie has been managed or restored – that is, very few places in the city proper. One such place is along Nine Mile Creek in Bloomington, in Central / Moir Park south of 106th Street, just off of I-35W. My friend Jim is an inveterate wildlife enthusiast, and a few friends had planned to go out with him to Nine Mile Creek last year to see the pasqueflowers in bloom. In the fashion typical of the overcommitted city dweller, the trip was waylaid a week or two because of whatever plans we had, and soon it was too late. The pasqueflowers won’t wait. Three weeks goes by quickly, and the window passes before you know it.

Nine Mile Creek is its own watershed, tucked between the larger Minnehaha Creek and Lower Minnesota River watershed districts. The creek runs through a bottoms, right on the edge of a scrub prairie, and the pasqueflowers appear along the edge of the hillside. There are some odd juxtapositions in getting there – one must ascend and then descend a trail of log steps that look like they were set into the earth by post-office-mural New Deal relief workers, accompanied by some incredibly charming primitive signage warning of the steep trail. When you arrive at the slope where the pasqueflowers are, you pass the last thing you’d expect to see, which are a handful of manicured suburban lawns on the periphery of the park – pristine green right angles hacked out of the scrub prairie and fenced off. If you look at a satellite view of the area, you’ll see what I mean. Avert your eyes and focus on the prairie reclamation projects. 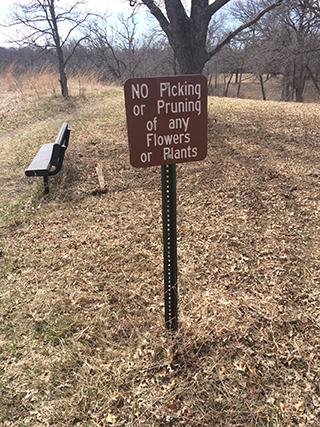 The pasqueflowers are, in person, both more vibrant and more subtle than you might expect. Part of it has to do with the shock of seeing a primary or secondary color in the wild after so many months of monochrome, even during a mild winter like this past one. I can only imagine how effervescent they must look peeking through the blank canvas of snow cover, but even viewed against a bottom layer of brown grass, they’re resplendent. They’re not a Vikings or Paisley Park shade of deep purple, though – it’s lighter than that, like a piece of amethyst costume jewelry you’ve pulled out of your dresser after a long winter, before you’ve blown the dust off.

There are two ways to enjoy the pasqueflower, both from a distance, and up close. The myriad names emphasize so many different ways of looking at the flower – I like prairie smoke a lot, and though it refers to a few other unrelated plants as well (the Geum triflorum most notably), gives a sense for the effect of seeing a mass of pasqueflowers against a prairie landscape from a distance. The term windflower also imparts a poetic quality of seeing clusters of downy, light purple blossoms ripple against that landscape.

But the anemone term works well when inspecting the pasqueflower up close. It’s a situation where the sea animal is actually named for its terrestrial counterpart, but I always think of the anemone in its marine context. The silky wisps on the underside of the plant do seem like tiny, individual tentacles, especially when they’re animated by a gust of wind. The word anemone, it turns out, is Greek for “daughter of the wind,” so it all comes back to the interplay between the plant and its larger environment. 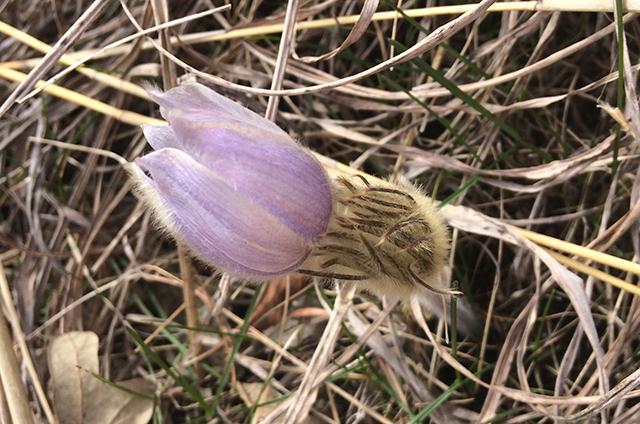 By the time this piece goes to press, most of the pasqueflowers will very likely be gone for the season. Unless you are one of the vanishingly small number of Minnesotans who live on a healthy prairie, the pasqueflower is something you need to set aside time to make a pilgrimage to see in person. But there’s next year, and the year after that.

Special thanks to Jim Proctor and Ginny Bueide.