First a note on what I did not see: Flying Cloud Airport.

The Twin Cities metropolitan area is ringed by six small airports, from Airlake Airport in Lakeville to Anoka County Airport in Blaine, mostly serving business and leisure flyers – hobbyists, charter airlines, corporate travelers. The largest and sleekest of these is Flying Cloud Airport, located in Eden Prairie over the north bluffs of the Minnesota River between Flying Cloud Drive and Pioneer Trail.

Flying Cloud is where most of the private corporate flight arrivals and departures in the Twin Cities happen. The southwest metro is home to a number of large companies – Eden Prairie alone is home to Cambria, Cub Foods, SuperValu and the Fortune 500 logistics company C.H. Robinson, whose massive campus is located just south of the airport. It’s probably safe to assume many of the turboprops zooming in and out of Flying Cloud are occupied by executives from these and many other nearby corporations. Most of us know Minneapolis-St. Paul International Airport fairly well, but unless you’re a regular corporate jet or recreational flier, these smaller regional airports are more mysterious. 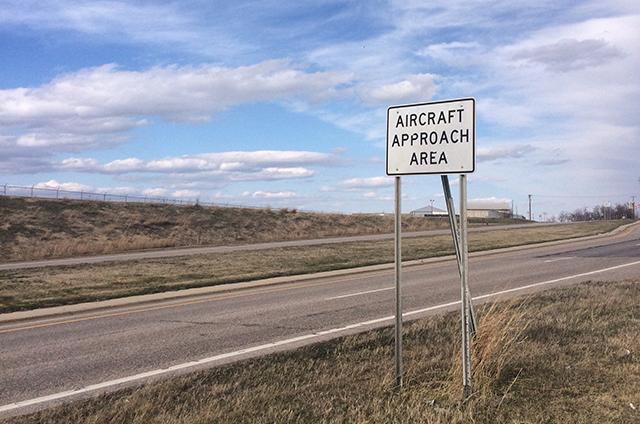 A walk around Flying Cloud Airport seemed promising, but it became quickly apparent after surveying the scene that a walk around the airport was going to be literally just that – a walk around the perimeter of the airport. It’s hard enough to explore MSP airport without a valid ticket. A smaller airport like Flying Cloud, with limited public access, isn’t the sort of place you can just aimlessly hang around on a Sunday afternoon, as the barbed wire fences and security patrols quickly made clear. They do have occasional open houses and events, so you can see it up close on special occasions. But not this weekend.

There are two things that are helpful to have while out walking around a landscape not known to you: a willingness to be flexible with your itinerary, and the guidance of a local. The former is usually not a problem. Fortunately I also had the latter, in the form of Mike Haeg, mayor of the nearby Minnesota River valley township of Mt. Holly, and a native of Shakopee. Instead of delving into the mysteries of the hangars and terminals of Flying Cloud, we got a quarter-century self-guided tour of the less visible social, economic, natural and infrastructural highlights of the southwest suburbs, all located along Flying Cloud Drive. It ended up being one of the best walks I’ve gone on for months, and I didn’t step foot inside the airport at all. So you never know.

Incidentally, the airport was unbeatable as a backdrop to – if not focus of – the afternoon’s walk. A constant presence in the skies over the course of the afternoon was a yellow biplane, presumably the World War II-era Stearman N2S-1 operated by the Wings of the North aviation club located at Flying Cloud (and an actual plane once flown by George H.W. Bush during his naval aviation career). The view from the bluffs around the airport are impressive enough on foot. I can’t imagine how good it must look from the open cockpit of a biplane. 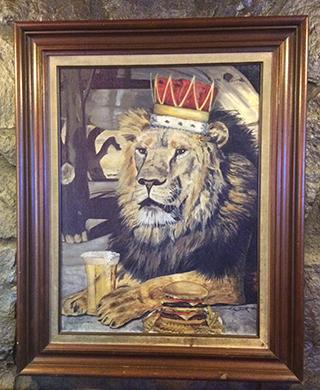 Any trip to Eden Prairie should either begin or end with a trip to the Lion’s Tap restaurant, located at the bottom of Spring Drive at Flying Cloud Drive. In the Best Burger in Town Sweepstakes, Non-Jucy Lucy Division (Matt’s Bar for life!), the Lion’s Tap is about the best there is – I can’t really think of a better cheeseburger in town. The Lion’s Tap is the sort of place that exists in what you might call the Wood Panel Belt, a circumstellar disc of culinary options located beyond the first-ring suburbs. Composed of roadhouses, buffets, VFWs, diners and breakfast joints whose interior designs are largely defined by wood paneled walls and drop ceilings, these are restaurants that have largely disappeared from the core cities, but thrive on the periphery. Typically, the shorter a menu is, the better this type of restaurant will be, and the Lion’s Tap only has six items on the menu, all of which are burgers. All of them are delicious. 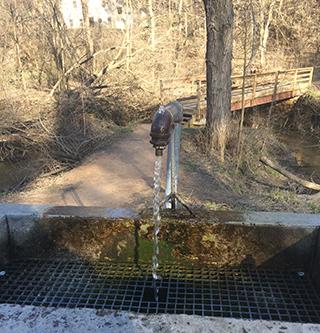 The “Spring” in Spring Road is located about a third of a mile from the Lion’s Tap. It’s difficult to walk, being a winding road up a hill with not much of a shoulder. But once you get there, the spring is located at the head of a turnaround. The Fredrick-Miller Spring is a publicly accessible spring tap with untreated spring water from a shallow aquifer flowing from it 24 hours a day. The tap itself is extremely utilitarian – a metal spigot over a concrete basin with no sense of whimsy, despite the fact that a functioning spring tap located 10 miles outside the city is about the most whimsical thing I can think of. I wondered why it wasn’t more attractive. I learned subsequently that it’s the sort of public object meant to generally be user-friendly but not appear too attractive – the civic tension between public safety and public utility at the spring is nicely captured in James Eli Shiffer’s profile from last year. Either way, it’s enormously popular. The drive-up is typically five or six cars deep, with people filling up everything from water bottles to larger containers. One guy was filling up six five-gallon water cooler jugs and loading them onto the back of a truck.

From the spring, there’s a trail leading up into the residential areas – mostly townhouses – between the airport and the river. These are some of the best views of the river valley in a river valley with no shortage of excellent views. From there, you can make your way to a former tourist site that’s no longer open to the public. But before we get there, there are a few other stops along the way. 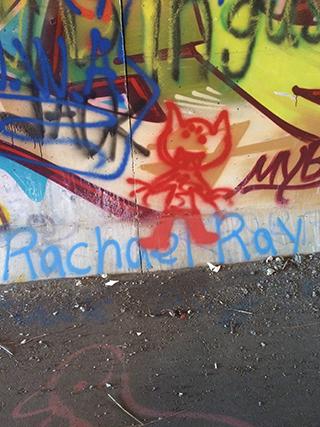 Near the C.H. Robinson campus on Charlson Road, there’s a pedestrian underpass beneath Flying Cloud Drive that’s worth a closer look. It’s so inundated with hyper-color graffiti I thought initially it must be a city-sanctioned youth project – a cursory look at the generally NSFW ambiance, though, suggests that maybe it’s not. In some ways, it seems like an ancestor of another Eden Prairie landmark, the so-called Graffiti Bridge, a railroad bridge that absorbed some of the local populace’s more unsanctioned expressions of creativity for several decades until is was torn down in 1991. You may recall Prince’s 1990 movie and album of the same name. The bridge now only lives on in photographs, but the graffiti underpass looks like it shares some similar DNA. Just as the old Graffiti Bridge was prompted by anti-Vietnam War graffiti in the early 1970s, so to does the graffiti in the underpass run the gamut of the political spectrum, from “Black Lives Matter” to “Google Agenda 21.” Plus some weird non sequiturs: my favorite was someone scrawling “Rachael Ray” in 2-foot-high blue letters. 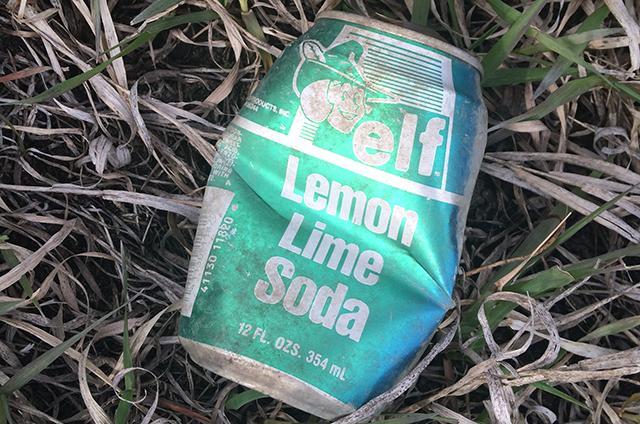 MinnPost photo by Andy Sturdevant
A can of Elf-brand soda probably older than your kids.

The bluff south of the underpass below Flying Cloud Drive is angled in such a way that makes walking across it challenging, but not impossible. As such, one gets the sense that it’s traversed occasionally by hikers and pedestrians, but not often. One of the most interesting sights along the way – sad, for obvious reasons, but fascinating for other reasons – is the variety of beer can litter to be seen along the hill. It’s practically a museum of brewing technology. I found a crushed can of Elf Lemon Lime Soda, a regional brand of pop distributed by SuperValu and defunct for probably three decades. Elsewhere are brown bottles of Kingsbury beer (R.I.P.), and 12 oz. flattop cans of Hamm’s that must be at least 20 years old and required a churchkey to open. Aside from being a deep dive into the aesthetics of Midwestern beer culture, it’s also a sobering reminder that the crap we throw out doesn’t just disappear. It stays around for decades. 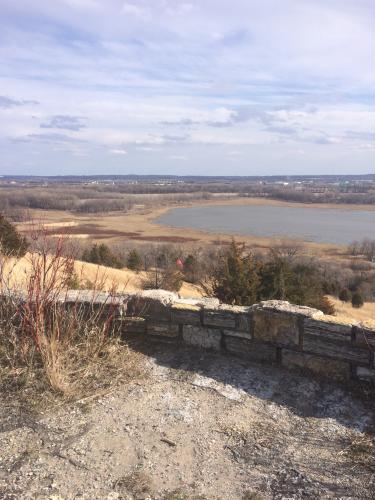 At the end of the trip is a true gem, located on the stretch of Flying Cloud Drive near the Minneapolis Community and Technical College’s Aviation Center: the remains of the Lookout Park Wayside. It’s not publicly accessible, generally, but in the same way that our walk through Eden Prairie has brought us through any number of quasi- and unsanctioned activities, there is clear evidence the site is still occasionally used.

The Lookout Park Wayside was a WPA-era roadside concourse and picnic area, built in 1938 in the Rustic Style typical of federal projects from that time. It tells the story of the development of Eden Prairie over the past few decades. Flying Cloud Drive was once a major arterial trunk road, generally connecting to Old Shakopee Road and Chaska Drive, the easiest and fastest way for motorists to travel along the Minnesota River Valley between Fort Snelling and Chaska. Vacationers and travelers would have made extensive use of the road before World War II, and the wayside provided a pleasant place to stop, eat a meal, and view the expanse of the river valley. Eventually, Flying Cloud Drive was supplanted by Highway 212, and the rest stop fell into disrepair. Today, it’s not accessible from the road by automobile, though you can see part of it peeking up from the undergrowth. You can still walk to it, though it requires an unwise dash across the highway, or a trek through the Valley of Vintage Beer Cans. It still provides a sweeping view of the valley, and though in a dilapidated state, has more than enough of the underlying structure intact for a future rehabilitation. There was a National Register of Historic Places nomination as late as 2001, so perhaps a rehabilitation is something that could still happen in the future. Until then, you’re on your own. 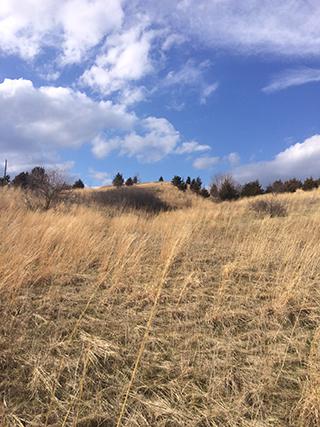 MinnPost photo by Andy Sturdevant
Flying Cloud Airport airspace, seen from the
bottom of the bluffs.

Aside from the river valley, you can also see the air traffic from Flying Cloud Airport overhead. Most of the afternoon, George H.W. Bush’s biplane was zooming around in the sky – that somehow added a suitably patrician quality to the afternoon, especially considering the fact that we were down there on the ground, spending an afternoon among the non-patrician likes of drunken litterbugs, cheeseburger enthusiasts and teenage graffitists. The internal workings of Flying Cloud Airport remains a mystery, at least until I get an invitation from one of my better-connected readers at an Eden Prairie Fortune 500 to come give a guest lecture and they fly me in on a Learjet. Until that time, the airport remains a somewhat glamorous backdrop for a walk through the valley on the edge of Eden Prairie.